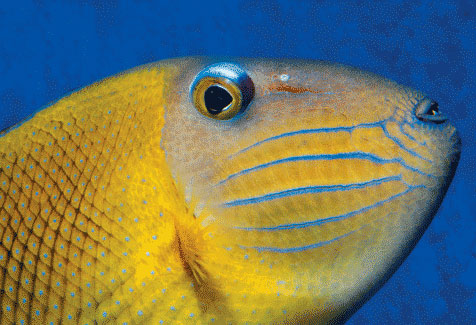 They are members of the Order Tetraodontiformes, a group considered to be highly “advanced” because of its sophisticated anatomical plan: fewer teeth, massive fusion of the jaw bones, no lower ribs, no pelvic fins, no pelvic girdle (in some), and a reduction in the number of bones in the skull.

The triggerfishes are laterally compressed and deep-bodied, with eyes set high on the head. They have two dorsal fins, with the first dorsal having three spines that can be depressed into a groove along the back. All the soft fin rays are branched, they have no pelvic fins, and the teeth are well suited for crushing hard-shelled prey. They have stout pharyngeal teeth, with eight teeth protruding in the front of the jaw and six set right behind them. The skin is tough, with large, nonoverlapping scales. Some of the balistids have forward-curved spines on the posterior portion of the body and caudal peduncle. These spines may be employed during intraspecific aggressive interactions. The first dorsal spine can be locked into an erect position by the smaller second dorsal, or “trigger,” spine.

Captive care: Many of these fishes are aggressive and predatory, and their tankmates should be chosen very carefully. Zoo­plankton-feeding triggerfishes are best suited for a community setting, and several species can even be housed in reef aquariums. However, most triggerfishes feed on a wide array of sessile and motile invertebrates and will eat small fishes. Provide a medium to extra-large aquarium with suitable hiding places.Be careful when handling or working in a tank that contains a large specimen—it can deliver a painful (and potentially serious) bite. Never try to extract a triggerfish that has locked itself into a hiding place. Use a specimen container when capturing one of these fishes as the fin spine and bristles on the caudal peduncle may get tangled in the mesh of an aquarium net. It is possible to place different triggerfish species together in a large aquarium, but keep only one member of a species in the same tank, unless you can acquire a male-female pair.

Feeding: Most triggers feed on a wide range of prey items, especially benthic invertebrates. A few species specialize in zooplankton or floating algae. Offer a varied diet that includes crustacean meat and some hard-shelled invertebrates (like mollusks), or occasionally place a piece of coralline algae-encrusted coral rubble in the tank to help them wear down their ever-growing teeth. Try to feed them several times a day. Triggers tend to become more aggressive if given a diet that includes live feeder fish.

Notes: Those triggerfishes studied to date lay demersal eggs—often in a depression in the sand—which the males aggressively defend. Some nest-tending males have been known to attack and inflict harm to human divers. At least some of the triggerfishes are sexually dichromatic.