David W. Greenfield and his colleagues have introduced several new species of Eviota dwarfgobies during the last four years. All images CC BY 4.0

Eviota gobies are among the smallest in the family Gobiidae, seldom larger than 18 mm in length (0.75 inches). They are ideal for pico reef aquariums, and a couple species have become routinely available in the aquarium trade, notably the Red Neon Dwarfgoby (Eviota nigriventris) and the Gold Neon Dwarfgoby (Eviota pellucida), both of which are exported on occasion from Cebu in the Philippines. Other species have made appearances in the aquarium trade as well.

At the last tally, four species of Eviota had been bred in captivity; infrequent availability could be a motivator for prospective breeders to pursue these tiny fishes. However, their naturally short lifespans are a double-edged sword; David W. Greenfield notes, “One species of Eviota, E. sigillata, has the shortest lifespan known for any vertebrate, living a maximum of eight weeks in a large sample, the first three of which are in the pelagic larval phase.” Short lifespans mean there is a need for careful management of broodstock in captivity, planning ahead for future generations, but they also mean that customers will naturally seek replacement fishes as a matter of routine. Whether enough aquarists would be willing to pay to ensure the availability of small bejeweled Eviota gobies for the pico aquarium hobby as a matter of routine would be a very important question to answer before diving headlong into commercial production of the minuscule marine fishes; even small freshwater treasures like the Celestial Pearl Danio (Danio margaritatus) live three to five years and have a retail price point under $10 US.

Shockingly, it’s already been several years since we highlighted the massive free compendium of Eviota goby species compiled by David W. Greenfield and Richard Winterbottom in 2016. At the time, the species tally for this genus of tiny, sometimes colorful, and often short-lived gobies stood at 111. In late 2017, Greenfield published an updated overview of the Eviota gobies, noting that even more species awaited formal description.

At the time, Greenfield noted that Eviota is “the fifth most speciose saltwater teleost genus, and second only to the 129 species in the eel genus Gymnothorax in the coral-reef ecosystem (Eschmeyer et al. 2017).” Currently, Fishbase recognizes 126 valid species of Gymnothorax eels, meaning that the Eviota genus may well be poised for a takeover in the years ahead. How close?

We’ve compiled a summary of several new species that have been described in the intervening years, starting with 2017; we’ll see just how many Eviota gobies we now know of at the end!

Starting our overview, the Mimic Dwarfgoby was the first new species to be described after the late 2016 key was published by Greenfield and Winterbottom. Eviota imitata was discovered in Raja Ampat, West Papua, Indonesia. It was found in a “current-swept rubble field ranging from 8–12 m deep (26-40 feet).” The names for this fish are not derived from any mimicry of other sympatric species, but rather its resemblance to a related species, E. flebilis, which is found in the Ryukyu Islands of Japan. Furthermore, the authors hint that there is another population of fish that appear similar to E. imitata but differ slightly in coloration, which could represent a variant or a new species. Further study is needed. 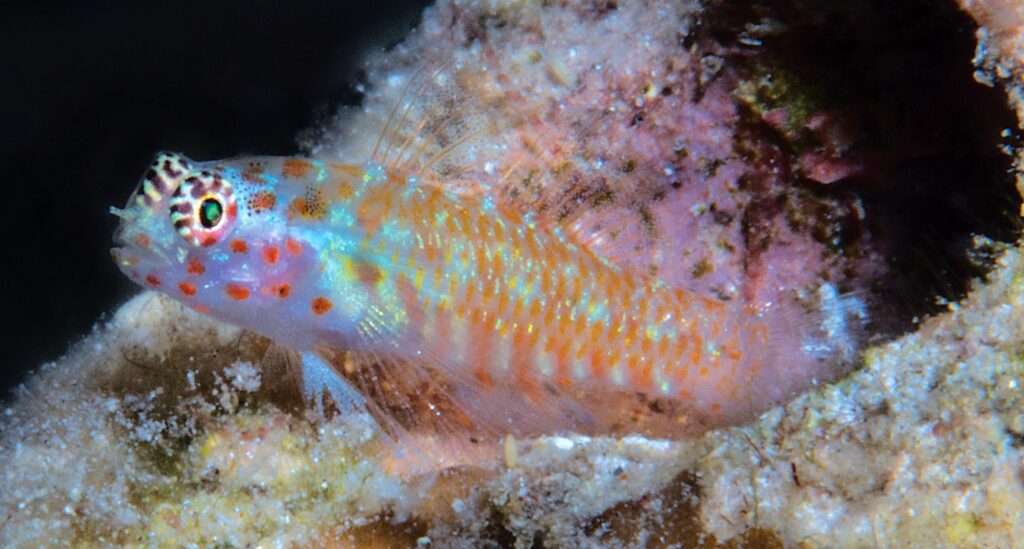 The Paintedface Dwarfgoby is a beautiful new addition to the Eviota genus. It was discovered by Mark V. Erdmann in shallow waters of Saleh Bay on the island of Sumbawa, Indonesia (also home to E. maculosa, below). Given the prominence of Indonesia’s marine aquarium fishery and trade, perhaps the odds of one day seeing this species offered in the aquarium trade are better than most of the new species outlined here. Discover the species…

Norfolk Island, part of Australia but 1,412 kilometres (877 miles) to the east of the mainland, is perhaps best known to clownfish enthusiasts as one of the two identified locations for populations of the McCullochi Clownfish, Amphipiron mccullochi. At that location is another rarely-encountered Australian species, the Wide-band or Latezonatus Clownfish, A. latezonatus. Known for the subtropical climate, the cool waters of Norfolk Island held another secret: the endemic Frecked Dwarfgoby, described as Eviota lentiginosa. This is among the more muted of the new Eviota species, with a coloration consisting of pale yellow, white, and fine brown spots over most of the body. Learn more.

This new Eviota has a somewhat wider range when compared to many of the new species discussed herein. While at first it seems similar in appearance to Eviota punctulata from Fiji, DNA sequences matching between specimens collected from West Papua (Fakfak), Sulawesi, Pohnpei, and the type location of Teluk Saleh (Saleh Bay), Sumbawa, Indonesia, bring those populations under the new umbrella of E. maculosa. Additionally, the authors suggest that populations of E. punctulata from Samoa and Tonga may represent one or more new species, but note that further data and specimens would be required to make that determination. Found at the reef crest in shallow waters of 2–6 m depth (roughly 6–20 feet), along with Indonesia’s ongoing exports of marine aquarium fish, it’s conceivable that this species could someday wind up in the aquarium trade. Meet the Polkadot Dwarfgoby.

Right in the title of the species description, Eviota gunawanae is noteworthy as a “microendemic” species. The authors report that this striking species is “currently known only from Karas Island in the Fakfak Regency, West Papua Province, Indonesia. It is presumably more widespread along the poorly-explored Fakfak coastline, but unlikely to be found in the very well-surveyed Raja Ampat Islands to the north. The species was found in a relatively unusual deepwater-reef environment consisting of large foliose and plating corals on a gentle slope from 35–55m depth (approx. 115 to 180 feet), exposed to moderate currents but otherwise protected from wave energy.” Discover Tiene’s Dwarfgoby. 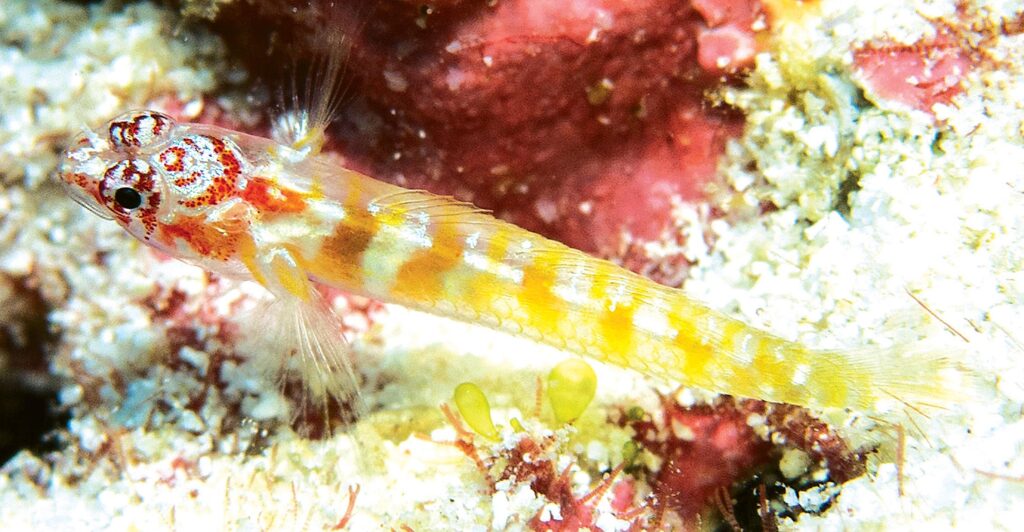 The Amirante Islands, a group of outer islands to the southwest of the main Seychelle islands, is home to the recently described Eviota dalyi, the Amirante Dwarfgoby. At the time of the description, it was only known from “a cleaning station on a reef north of D’Arros Island,” discovered, recorded, collected, and preserved by Ryan Daly and Luke Gordon. Discussing the discovery of E. dalyi, Greenfield notes that tiny fishes like these are often overlooked in general sampling efforts; he credits the targeted searches for specific types of fishes as the methodology required to discover species that are otherwise overlooked. In this case, E. dalyi represents one of 12 known species from the Seychelles, with a bold coloration and pattern that’s unique among all the known species to date. Learn more.

The False Sunny Dwarfgoby was discovered in Koror, Palau, in 2004 by Richard Winterbottom, and was subsequently also likely found around the Raja Ampat Islands of Indonesia in 2010 by Mark V. Erdmann. Winterbottom and Greenfield believe both populations to represent the same species, although only the specimens from Palau were used in the actual species description. The authors include interesting, highly detailed images of the urogenital papillae, which show clear differences in shape and structure between males and females, although discerning these differences with the naked eye could be impossible! See more. 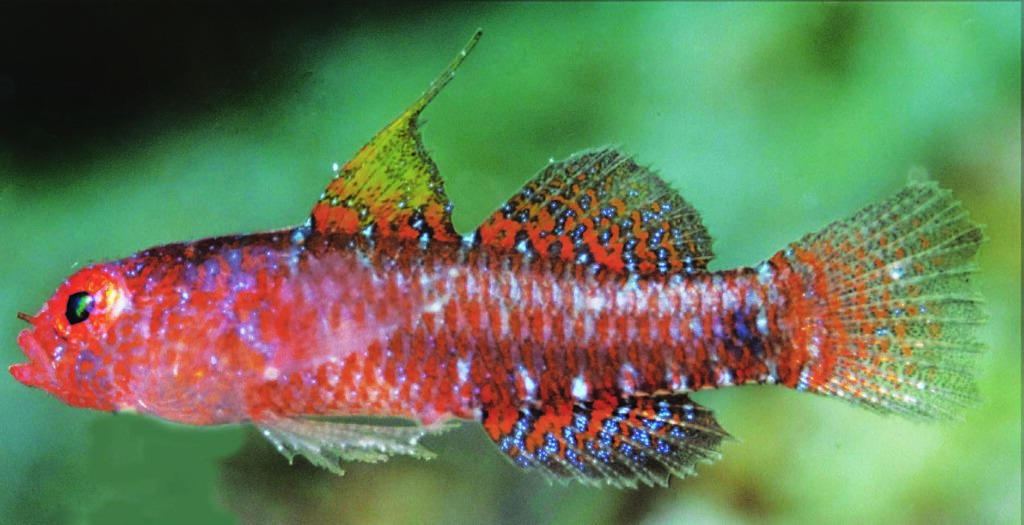 Given the common name of Red Star-eye Dwarfgoby, Eviota marteynae receives its species name from Ms. Marteyne van Well. Ms. van Well is the general manager of the Six Senses Resort at Laamu Atoll in the Maldives, and she invited Mark V. Erdmann and Gerald R. Allen to conduct reef-fish biodiversity surveys at the area in 2018 and 2019, as many records of fishes from the Indian Ocean lack live photographic documentation, which makes it difficult to distinguish them from similar species in the Pacific Ocean. This new goby was uncovered through these surveys.

According to the authors, Eviota marteynae “is currently known only from Laamu Atoll, Maldive Islands. The specimens were collected or observed across a depth range of 8–30 m (26–98 feet), and were found under large pieces of coral rubble along a gentle slope on an inner patch reef. They were never observed in the open, but only found under coral rubble and living within the interstices of the reef.” Read the description.

So, how many Eviota Dwarfgobies are there?

Fishbase currently recognizes 117 valid Eviota species. However, that list does not include any of the species described in 2020 by Greenfield and his collaborators. That puts the species count to 120. Officially, Greenfield and Erdmann put the species count at 122 as of September 8, 2020, which means there are probably a few more species we’re not accounting for! Already hinting at the possibility of more Eviota species descriptions to come in several of these recent papers, we wager that it is quite possible that this genus of tiny gobies may well overtake the species diversity of coral reef moray eels (Gymnothorax) in the years to come.

We’d like to thank Greenfield, Erdmann, Tornabene, the late J.E. Randall, Winterbottom, Gómez-Buckley, Pada, and Gorden for their ongoing contributions to open-source, open-access journal publications through the Journal of the Ocean Science Foundation. Choosing this vehicle to convey scientific discovery allows greater public access to the constantly growing body of knowledge, and it offers greater opportunities for connections and appreciations of coral reef biodiversity.