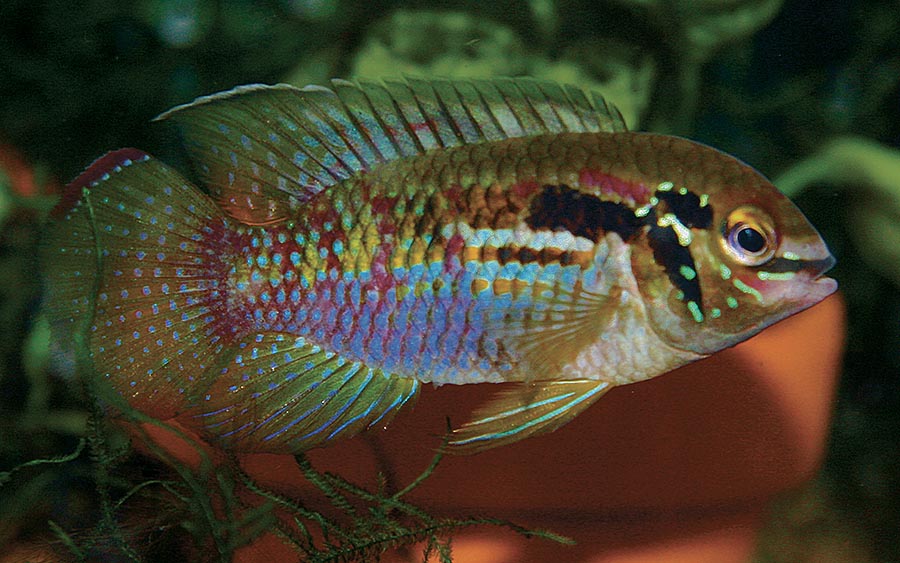 an excerpt from the September/October 2020 issue of AMAZONAS Magazine, by Paul V. Loiselle

The history of Laetacara araguaiae, both taxonomic and aquaristic, is convoluted. This colorful cichlid entered the German hobby in 1949 under the name Aequidens thayeri, a valid and closely related species described from the western Amazon basin. Given that the fish in question were exported from Belém in eastern Brazil, at the mouth of the Amazon River, and the fact that they sport very different color patterns, it is at first glance difficult to understand how such a misidentification could occur. However, due to the imprecise nature of the original description of Laetacara thayeri, as this species is now known, and how little was known of the distribution of Amazonian fishes 65 years ago, it is much easier to forgive this erroneous identification. 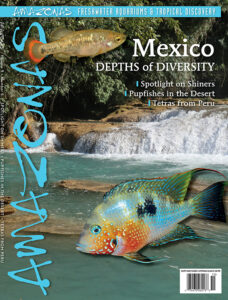 This Species Snapshot was first published in AMAZONAS Magazine, Volume 9, Number 5, MEXICO: Depths of Diversity, our September/October 2020 issue. Never miss our exclusive coverage of rare and unusual aquarium fish when you subscribe to AMAZONAS! This issue is also available directly from the publisher as a printed back issue.

In 1978, German hobbyists realized they were dealing with a different—and undescribed—species, upon which they bestowed the cheironym Aequidens sp. ‘Buckelkopf’ (meaning round or bump head) (Romer, 2000). Another 31 years passed before two Brazilian ichthyologists, F. P. Ottoni and W. J. E. M. Costa, formally described the buckelkopf acara, bestowing upon this distinctive little cichlid the name Laetacara araguaiae.

Smiling acaras, to give Laetacara species their English common name, are small cichlids, rarely exceeding 4 inches (10 cm). SL. Laetacara araguaiae is one of the smaller species of the genus, qualifying on the basis of size as a dwarf cichlid. Males can grow to 3 inches (7.5 cm) SL, but it is unusual to encounter specimens larger than 2.5 inches (6 cm) SL. Females rarely exceed 2 inches (5 cm) SL. Its temperament also qualifies L. araguaiae as a dwarf cichlid. The behavior of this species towards smaller schooling tankmates is exemplary. Indeed, it displays much less shyness when housed with small tetras, rasboras, or danios. Except when breeding, L. araguaiae poses no threat to Corydoras species or other callichthyid catfishes, nor does it have any issues with small loricariid catfishes such as Hypancistrus, Otocinclus, or Peckoltia species. Provided the tank is large enough, i.e., at least 36 inches (about 1 m) long, L. araguaiae will also co-exist amicably with other South American dwarf cichlids. Laetacara species neither eat nor uproot plants. Indeed, they are more comfortable, and certainly show their colors to the best advantage, in planted tanks with a dark substrate.

As its species name suggests, the type series of L. araguaiae was collected within the basin of the Araguaia River, a northward-flowing tributary of the Amazon. However, this species is more widely distributed and has been reported from the Tocantins, Tapajos, and Xingu Rivers, as well as from Isla Marajó, the large island situated at the mouth of the Amazon River (Romer, 2000). The south bank tributaries of the Amazon are clear-water rivers. This state of affairs greatly simplifies the aquarium maintenance of this species. Unlike black water species, which often require very soft, highly acidic water to thrive in captivity, pH values between 6.0 and 7.2 and hardness up to 10° DH suit L. araguaiae quite well. This is a tropical lowland species that does not tolerate chilling. A temperature range of 72–79°F (22–26°C) suffices for day-to-day maintenance, with an increase to 85°F (30°C) for breeding. This is an easily fed dwarf cichlid, with a healthy appetite for live, frozen, and prepared foods of appropriate size. Grindal and black worms, as well as frozen bloodworms and glassworms are particularly relished and are conditioning foods of choice. 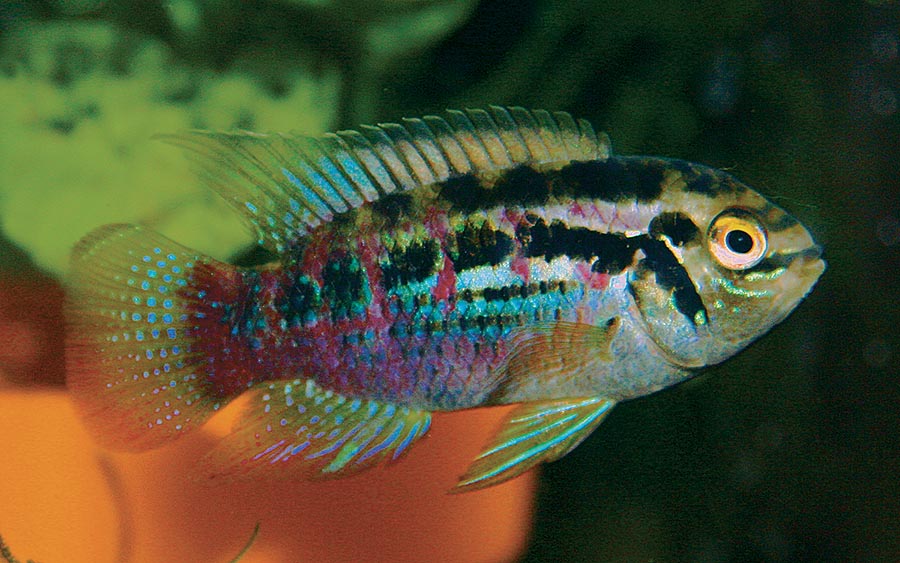 This female Laetacara araguaiae is arguably even more attractive than the male form of the species! Photo by Paul V. Loiselle.

Smiling acaras are usually easily sexed, as females have a roughly rectangular lighter-edged black spot in the spiny portion of their dorsal fin. Laetacara araguaiae is an exception to this rule. While some females may have an indistinct darker blotch in the spiny dorsal, most do not. However, in addition to being both smaller and fuller-bodied than males, females have less pointed soft dorsal and anal fins and usually show less coppery orange color on their flanks. This is an easily bred and surprisingly prolific little cichlid. A compact plaque of several hundred eggs is deposited on a solid surface. Both parents are actively involved in both hygienic and custodial brood care, although territorial defense is largely the male’s responsibility. Parental fish undergo a veritable Jekyll to Hyde behavioral shift and are likely to seriously injure or even kill tankmates unable to move beyond the boundaries of the pair’s territory.

The eggs hatch in 72 hours, and the fry are free-swimming six to seven days post-spawning. They are large enough to make an initial meal of Artemia nauplii or microworms and within a week one can add finely powdered flakes to their diet. Parental care can last for up to six weeks, but it is not unusual for the adults to re-spawn much sooner in captivity. As parents will not tolerate the presence of older fry in proximity to a new clutch of eggs, prudence dictates separating parents and offspring before the onset of a new spawning cycle, roughly three weeks after the fry have become free-swimming. With good feeding and frequent water changes, the fry grow fairly rapidly, reaching 1 inch (2.5 cm) SL at an age of about two months. By their eighth month, they are old enough to pair up and begin breeding.

Unlike its congeners L. curviceps and L. dorsigera, L. araguaiae has not attracted the attention of fish farmers in Florida or the Far East. Given that it is significantly more colorful than either of those species and just as hardy and prolific, this state of affairs can be expected to change in the near future.