Vaxx vexation: Dark days ahead for the American Horseshoe Crab? 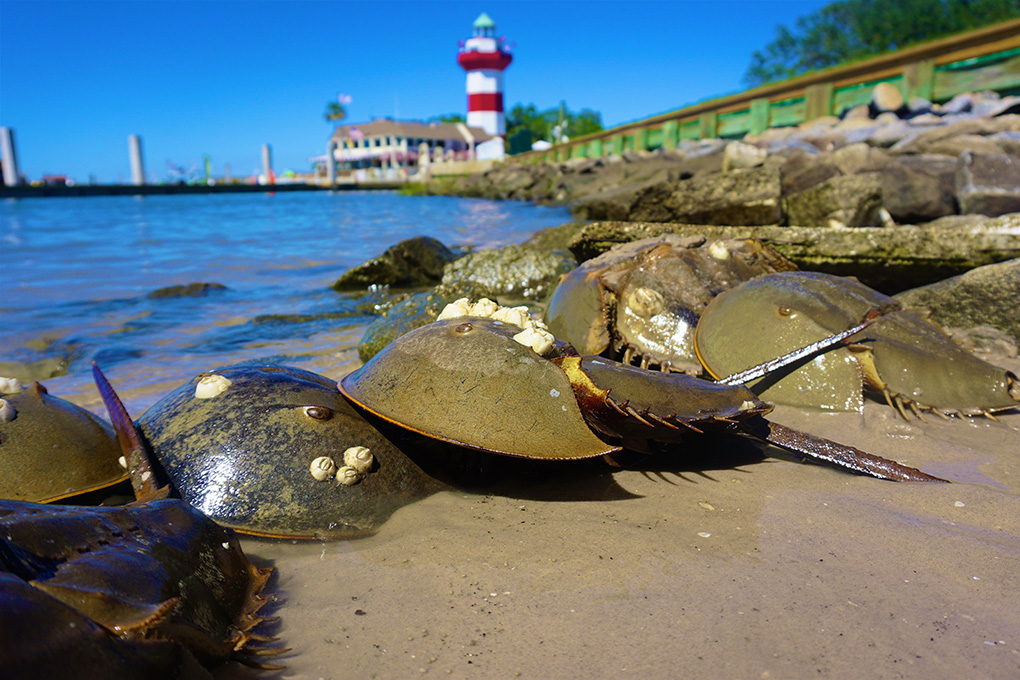 American Horseshoe Crabs for medical research are found along the Eastern Seaboard, with the greatest population density in the mid-Atlantic states. Credit: Captain Gillespie/shutterstock

Horseshoe crabs, those ancient arthropods from the family Limulidae that have been around for 450 million years, are considered living fossils that predate the dinosaurs and have somehow survived from the Paleozoic Era. Sporting a hard carapace and ten eyes that make them extremely photoreceptive, these creatures live in shallow coastal waters on sandy or muddy bottoms along the east coast of the United States. Marine aquarists occasionally encounter them, but they have a reputation for being clumsy, almost comical, animals that don’t adapt well to the rocky aquascaping of most typical aquariums.

Unassuming and awkward, the horseshoe crab would not draw much media attention were it not for its pale blue, copper-rich blood that happens to be the sole natural source of Limulus Amebocyte Lysate (LAL). It is harvested from one species, the American Horseshoe Crab, Limulus polyphemus, which ranges from the Gulf of Mexico to New England, with the greatest population density in the mid-Atlantic waters off Delaware and Maryland. Three other members of the family are found in the Indo-Pacific and are primarily used for table fare and as bait by native fishermen. All species are similar and are classified as xiphosurans, more closely related to arachnids and spiders than to true crabs and other crustaceans within the phylum Arthropoda. 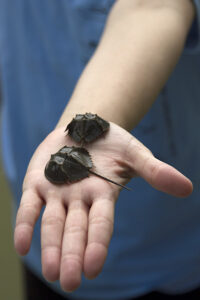 LAL is crucial to pharmaceutical companies, which use it in vaccine development to detect toxins called endotoxins that reside in the cells of bacteria. Endotoxins—which include E. coli, Salmonella, and Shigella—can be present in vaccines, injectable drugs, and artificial knees or hips. If they go undetected, they can seriously sicken or kill the user—causing high fevers, intestinal malady, and/or septic shock. They must be identified, and this is where the horseshoe crab’s blood comes in: endotoxins exposed to horseshoe crab blood cause the blood to clot, sending an obvious warning signal that the drug in question is not safe for human applications. This test, which uses a tiny amount of the ancient animals’ life source, is now the subject of a brewing controversy as the world grapples with COVID-19.

The protective element of American Horseshoe Crab blood whereby it clots and forms a sold mass when mixed with a bacterial endotoxin was discovered by medical researcher Dr. Fred Bang in 1956. By 1977, the U.S. FDA approved horseshoe crab lysate for pharmaceutical use. Throughout the 1980s and 1990s, horseshoe crabs were brought to facilities along the east coast of the U.S. to be bled for their lysate. Many crabs died in this period, though the pharmaceutical industry claimed that only three percent perished from the blood extraction. However, by the 2000s, horseshoe crab population numbers were found to have decreased, and independent studies showed that up to one-third of bled crabs died after the procedure. After pressure was exerted by environmental activists, companies made a shift towards sustainability. Two companies that breed horseshoe crabs for pharmaceutical use, Charles River Laboratories and Associates of Cape Cod, Inc., released 100,000 juvenile horseshoe crabs into the Atlantic Ocean off the coasts of Massachusetts and Rhode Island in 2019.

Every pharmaceutical company needs a supply of horseshoe crab lysate, and this is especially true as companies begin to plan for ramped-up production of the COVID-19 vaccine to help combat the global pandemic. Companies will need an especially large supply of the lysate in order to test for bacterial contamination in the huge number of vaccine doses that will be required in the coming months and years. The process for extracting LAL can damage horseshoe crab populations because they are caught and bled, then released them back into the ocean, where many of them die from the trauma. Most years, half a million Atlantic horseshoe crabs are bled for lysate extraction, and their numbers have decreased over the past few decades, due to LAL extraction and overfishing. Beyond the environmental costs, the monetary costs associated with lysate production are sky-high: a single gallon can cost $60,000. LAL extraction is a billion-dollar industry that in a typical year supplies around 70 million tests to pharmaceutical companies.

Looking to move away from reliance on animals, in Europe in 2016, scientists developed a synthetic crab lysate that was said to perform as well as the real thing for a fraction of the price. Some U.S. pharmaceutical companies began using the lysate, called recombinant factor C (rFC), but in June 2020, U.S. Pharmacopeia, which regulates the U.S. pharmaceutical industry, stated that rFC was not of equal quality to natural crab lysate and that its safety has not been proven yet. They defended this position by saying that they have 30 years of data showing that horseshoe crab lysate is safe, but only two years of data about the synthetic lysate, so they need more information over time. Charles River Laboratories, for its part, maintains that the rFC test is not proven as safe and effective as the LAL test. 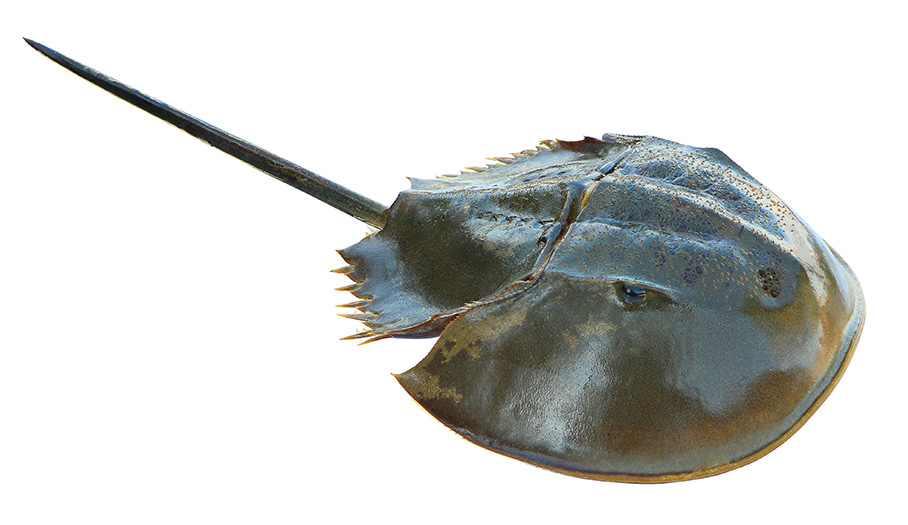 American Horseshoe Crab, Limulus polyphemus, has a helmet-like carapace with two dorsal compound eyes and eight other photoreceptors facing up, down, and along the telson or tail of the animal. Credit: chatchai.wa/Shutterstock

Further, U.S. Pharmacopeia banned the use of rFC in the U.S., which means that any vaccine distributed and administered in the U.S. will need to be tested with LAL, and when all is said and done, billions of doses will need to be tested for endotoxins. Additionally, it is not just the final product that needs to be tested, but also elements of the vaccine (including vials, stoppers, and separate ingredients) must be tested for safety at multiple steps during production—the final figure for lysate doses needed rests somewhere around 10 times the number of actual vaccines produced. This enormous demand has huge implications for the horseshoe crab population in the Atlantic Ocean, and some scientists are sounding the alarm that the declining population will not be able to withstand the increased need for LAL in the coming months.

The Food and Drug Administration (FDA) is currently examining data from U.S. Pharmacopeia and individual vaccine manufacturers to determine if rFC is safe. There are regulatory hurdles, though: a company that uses rFC to test a drug must show with data that it is as effective in identifying endotoxins as the standard LAL test. In a move that shows they are open to collecting as much data as possible, U.S. Pharmacopeia announced that they would assist vaccine-makers with information resources to help them evaluate and potentially validate the rFC tests. But the efforts required to show efficacy of rFC are time-consuming and may serve is a deterrent to some pharmaceutical companies.

One pharmaceutical company that has been advocating for the synthetic lysate testing is Eli Lilly, which has used rFC to test new injectable drugs since 2016. They cite the lowered burden on the animal population, reduced cost, and consistent safety to support their use of the rFC test. Eli Lilly even brought a migraine medicine, Emgality, to market after solely using rFC to test for its safety. Recently, they announced that they are testing a COVID-19 antibody with rFC. Scientists at Lilly say they trust rFC and express worry that U.S. Pharmacopeia’s extreme caution will delay its broader use by years—they say the validation requirements imposed by U.S. Pharmacopeia forced them to clear extra hurdles in the production of Emgality. But they also hold hope that the FDA will see the data clearly and put rFC and LAL on equal footing sooner rather than later. 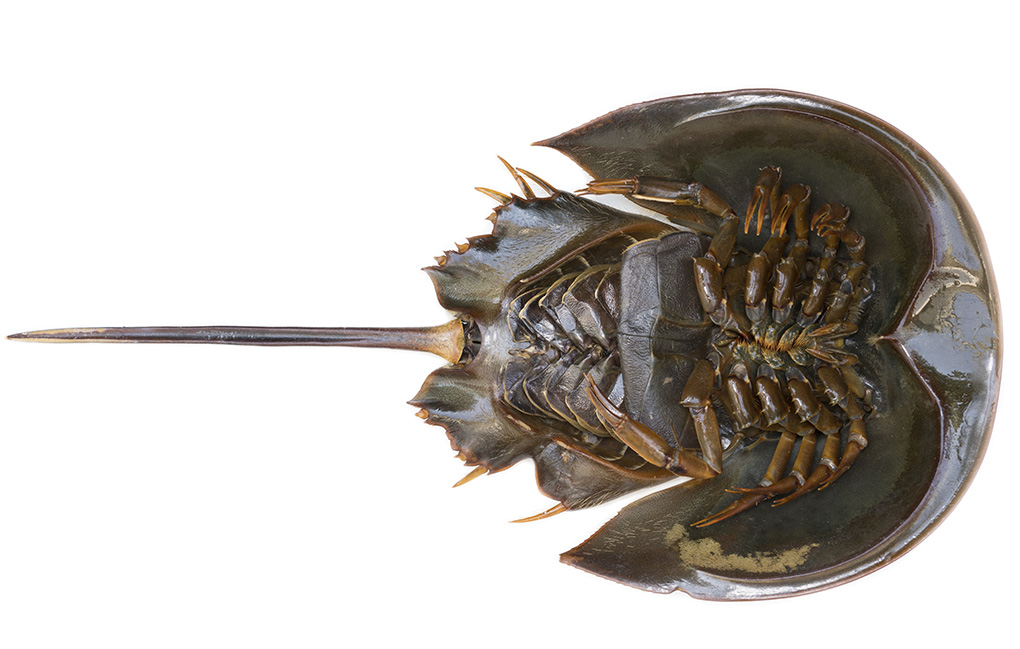 Its ventral side has six pairs of appendages, a central oral opening, and five pairs of gills on the abdomen. Credit: chatchai.wa/shutterstock

Conservationists share this hope. They note that migratory shorebirds like the Red Knot need horseshoe crabs to survive (they eat the crabs’ eggs out of nests on the beaches along the east coast) and that the high burden placed on their population—in addition to other environmental stressors that affect horseshoe crabs, like overfishing and habitat loss resulting from sea level rise—warrants the use of rFC on a much broader scale. They see rFC as a way to take pressure off horseshoe crabs, and they are lobbying U.S. Pharmacopeia to reconsider the synthetic test. In 2018, 500,000 horseshoe crabs were bled to produce LAL tests, and many died as a result. Conservationists estimate that shifting to rFC testing could save the lives of 100,000 crabs each year.

Collection of horseshoe crabs for the aquarium trade is minimal, observers say, as demand for the animals come primarily for expert aquarists setting up special biotopes. According to invertebrate zoologist Dr. Ronald Shimek, “They are not suited to most systems. They are bulldozers capable of significantly rearranging a tank. They can easily become wedged in live rock formations and constantly need rescuing. An appropriate aquascape would be a large, open expanse of sand and seagrasses. However, they can strip a sand bed of noticeable life, after which they usually starve unless target-fed” (A PocketExpert Guide to Marine Invertebrates, 2004). Small specimens tend to do better in aquaria, but keep in mind that the maximum size of Limulus polyphemus is two feet (30 cm).

Clearly the greatest threat to horseshoe crab populations is the drug industry. Outside the U.S., pharmaceutical companies are forced to be flexible if they want to bring their drugs to the U.S. market. Lonza, a Swiss-based pharmaceutical company, began manufacturing their COVID-19 vaccine this month (July), and they are using natural horseshoe crab lysate so it can be distributed in the U.S. They maintain that “This places no undue burden on the supply chain or horseshoe crab population,” and that conducting the 600,000 necessary tests required to ensure the safety of five billion doses of the vaccine will only require one day’s production worth of lysate. However, Lonza says they would rather use their proprietary synthetic lysate, called PyroGene, but that “regulatory hurdles remain.” However, they continue, “We remain hopeful that the barriers preventing drug developers from using the synthetic alternatives are starting to fall.” 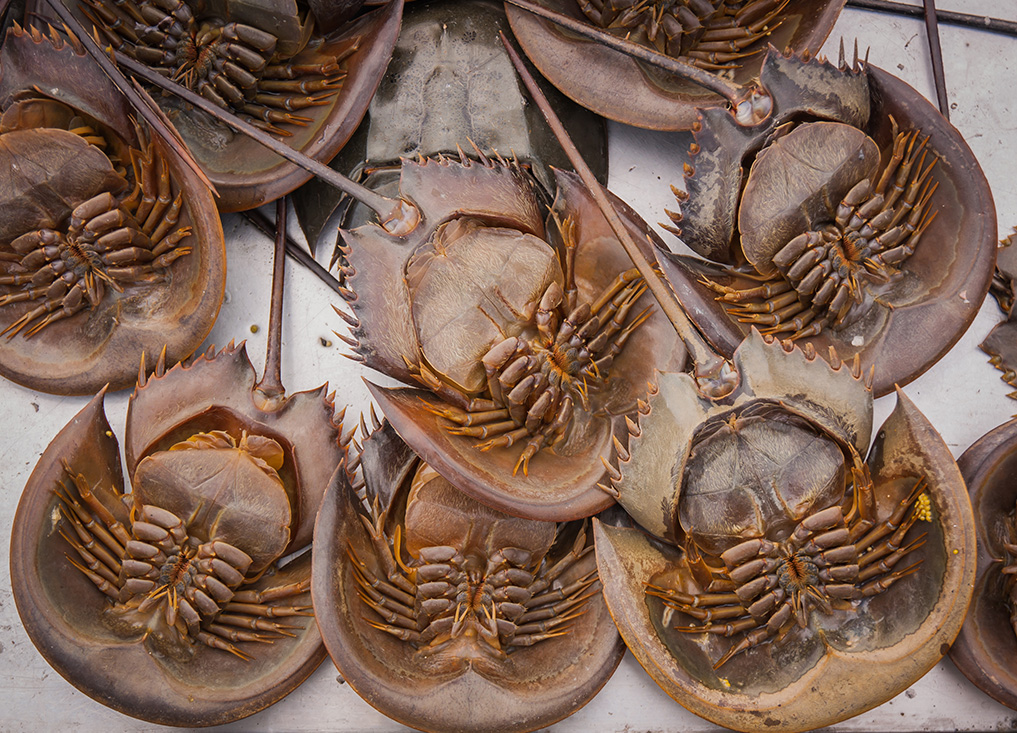 The horseshoe crab represents a vital balancing act: its blood contains something precious to humans, but our use of it can be detrimental to its population. Simultaneously, science has come up with an alternative that harms no horseshoe crabs, but it isn’t yet accepted by a major regulatory agency in the U.S. What will it take for U.S. Pharmacopeia to approve the use of rFC? Perhaps the vaccine that will help bring an end to the COVID-19 pandemic is what will change the industry.

References
The Race for a Coronavirus Vaccine Runs on Horseshoe Crab Blood
https://www.smithsonianmag.com/smart-news/race-coronavirus-vaccine-runs-horseshoe-crab-blood-180975048/

The Last Days of the Blue Blood Harvest
https://www.theatlantic.com/science/archive/2018/05/blood-in-the-water/559229/ 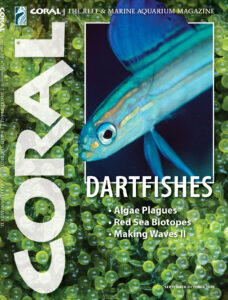 This article appeared in CORAL, September/October 2020, available from the publisher.