Accidental Angels? Explaining the Phenomenon of Fish Hybridization on the Reef 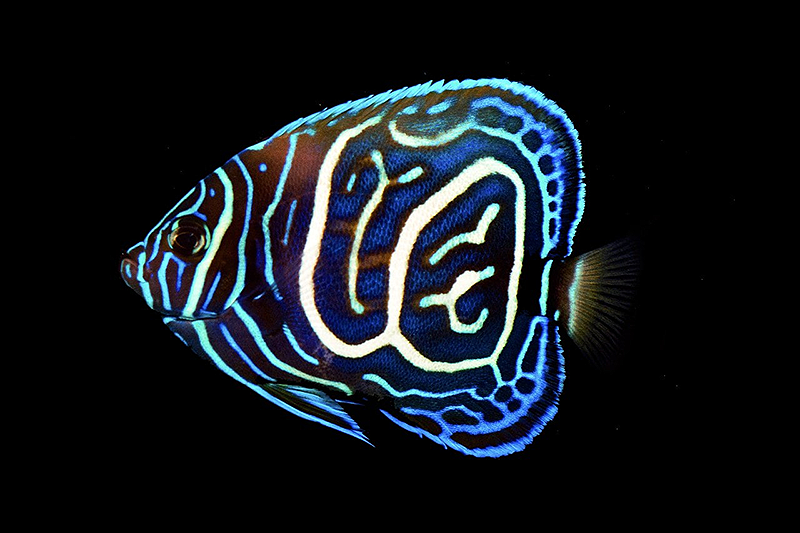 All God’s angels come to us disguised.
—James Russell Lowell

via University of Sydney

Why do some fish species form hybrids while others don’t?

In attempting to answer this question, researchers in Australia have discovered that marine angelfishes may be the most prolific hybridizers in the communities of species found on coral reefs. 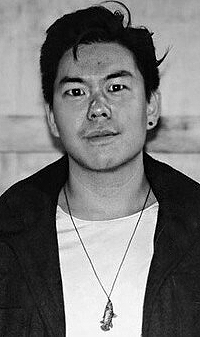 The research was led by Yi-Kai (Kai) Tea, PhD candidate at the University of Sydney’s School of Life and Environmental Sciences. Tea and his colleagues, Professors Nathan Lo and Simon Ho, Dr Joseph DiBattista from the Australian Museum, Jean-Paul Hobbs from the University of Queensland, and Federico Vitelli from Edith Cowan University, sought to explore why some fishes frequently create hybrids, and to look for the factors that facilitate this.

After deciding to focus on “one of the most charismatic and iconic groups of coral reef fishes,” they found that 42 species–nearly half of all known species of marine angelfishes—create hybrids.

“This is among the highest incidences of hybridization in coral reef fishes,” Tea said. The study has just been published in the open-access journal, Proceedings of the Royal Society B: Biological Sciences, August 5, 2020.

Tea continued: “We also found that hybrids are frequently produced even between angelfish species that are distantly related to each other; some separated by over 10 million years in evolutionary time.” 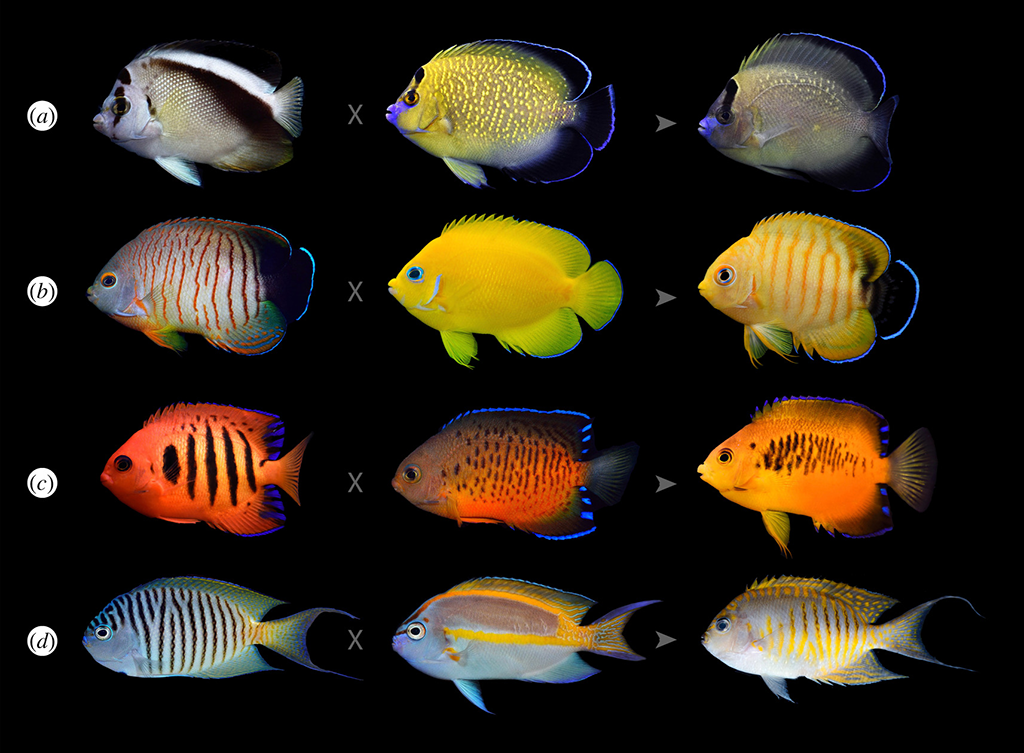 Putative hybrids are identified on the basis of intermediate coloration between contributing parents. This approach has been adopted by several authors in the context of the Pomacanthidae and has been demonstrated to be a sound approach in several other coral reef taxa. (a) Apolemichthys griffisi × A. xanthopunctatus; (b) Centropyge eibli × C. flavissima; (c) Centropyge loricula × C. ferrugata; (d) Genicanthus melanospilos × G. bellus. All photos by Y.-K.T.

“This genetic separation is quite astounding, considering that hybrids are rarely reported between species that share more than 2 percent in genetic distance,” Mr Tea said. “Though coral reef fish hybrids are common; they are usually formed by closely-related species.”

A third key finding was that angelfish hybridize wherever different species exist. This contrasts with other coral reef fishes, which tend to only hybridize within certain zones of their shared habitats.

It is generally believed that hybridization between closely related sympatric species that share the same geographic area may accidentally produce hybrids by spawning at the same time. Because marine angelfishes are pelagic spawners, releasing their eggs and sperm in the water column, it is possible for a mixing of species without an intentional mating between males and females of that species. However, this remains to be documented.

“In terms of coral reef fish hybridisation, much remains unanswered, particularly in the context of why, and how hybrids are formed. We still don’t know why some species hybridize and others don’t,” Tea said. “For example, the regal angelfish, Pygoplites diacanthus, is found throughout the Indian and Pacific Oceans, yet no hybrids have ever been reported for this species.” He also has pointed out that the rare, deepwater Peppermint Angelfish, Centropyge boylei, has yet to be reported as involved in hybridization events.

From the paper, the authors offer this point of view:

“Curiously, no hybrids have been reported between Pa. multifasciata and Pa. boylei despite their distributional overlap in the French Polynesian Islands of Rarotonga and Moorea. However, unlike Pa. multifasciata and Pa. venusta, Pa. boylei has a preference for much deeper waters (53–120 m versus 7–70 m in Pa. multifasciata), making any overlap in the two species a rarity. A more parsimonious explanation is that hybrids between the two species have not yet been recorded, which is not unlikely given the geographical isolation and preference of Pa. boylei for very deep reefs. Nonetheless, our study provides novel insights into the outcomes of hybridization between divergent species of marine angelfishes, with results corroborating previous studies on hybridization between other divergent lineages of coral reef fishes.” 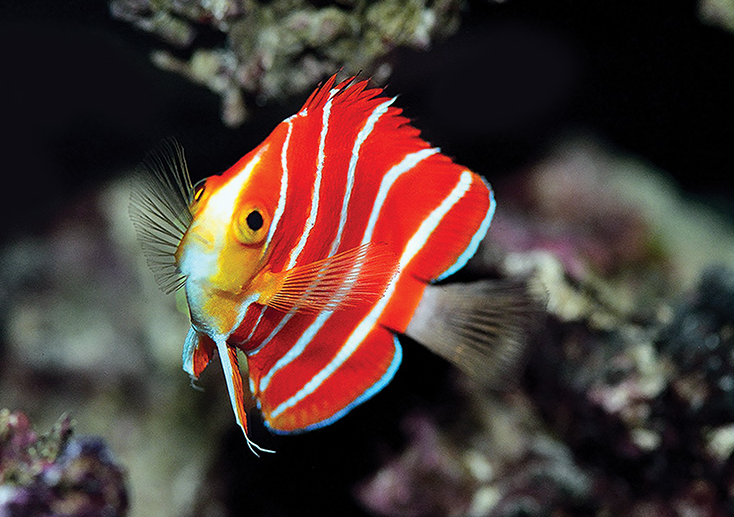 Paracentropyge boylei, the Peppermint Angelfish. The marine angelfishes are among the most charismatic groups of coral reef fishes, with up to 48% of the known species capable of hybridizing. This puts the family among the groups of coral reef fishes with the highest incidences of hybridization, not only between sympatric species, but also between deeply divergent lineages. Photo credit: Yi-Kai Tea.

“In terms of cracking the secrets to hybridisation in coral reefs, we’ve only just scratched the surface.”

Figure 2. (a) Geographical distribution of species of Paracentropyge. Known localities of hybrids are indicated by a solid star. Overlapping regions between species are denoted by coloured gradients. The Kuroshio Triangle sensu Chen & Shashank [35] is loosely reconstructed and represented by the dashed triangle. (b) Phylogenetic relationships and median-joining haplotype network among species of Paracentropyge based on mitochondrial COI. Phylogenetic relationships were inferred using maximum likelihood and Bayesian inference. Numbers at nodes indicate posterior probabilities and likelihood bootstrap support. Haplotypes of hybrids are indicated in light blue. Median-joining haplotype networks are also presented for (c) RAG2, (d) S7 and (e) TMO-4C4. Each circle represents a haplotype and its size is proportional to its total frequency. Unless specifically stated, each black crossbar represents a single nucleotide change. In the haplotype networks for RAG2, two haplotypes are presented for the single hybrid examined, corresponding to alleles inherited from each parent (see electronic supplementary material, figure S4). Sites that displayed ambiguous bases in the sequence of one or more non-hybrid individuals were removed from alignments prior to network construction, and a single haplotype consensus sequence per individual was used. Each network is, therefore, an underestimation of the true haplotype diversity at each nuclear locus for the parent species. Photographs of angelfishes from top to bottom by: H. Senou, Y.-K.T., J. T. Williams and Y.-K.T. 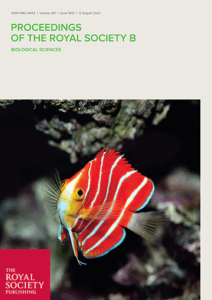 Proceedings of the Royal Society B featuring the Peppermint Angelfish on a recent cover.  Said the editors: “It commands star power due to a new study highlighting the remarkably high incidence of and tendency for hybridization in this family (even between divergent species), more so than in any other group of coral reef fishes.”