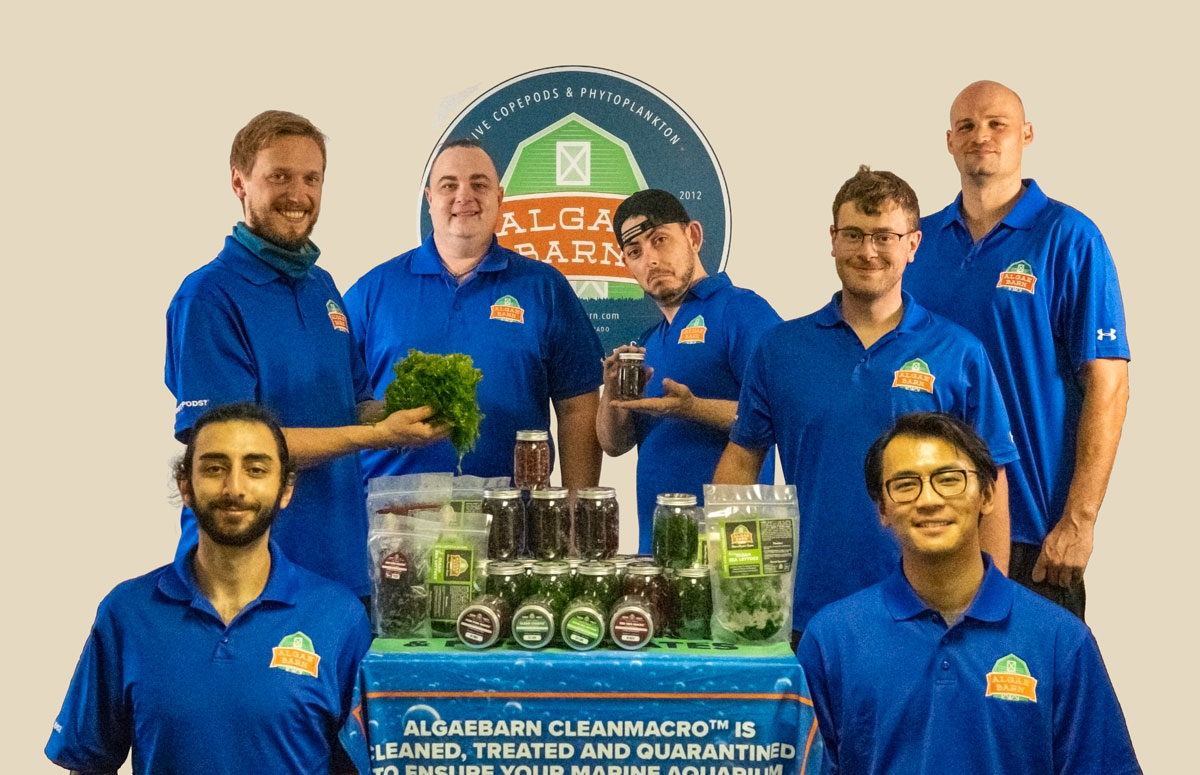 In the perpetual war against problem algae, a cutting-edge crew in Colorado promotes a biological arsenal of macroalgae for refugia and reactors.

Sean Tadjeran’s collegiate career might represent every parent’s worst nightmare. Imagine: your child goes off to a prestigious university, like the University of Colorado at Boulder, with a clear plan and an idea of what the future holds—perhaps a career as a biochemical engineer. However, while a respected, high-paying profession might have been the starting goal, along the way the freedom to explore other interests and passions can prove to be a distraction for a young adult during the college years. In the case of Tadjeran, reef aquariums lured him astray. His life would never be the same.

“My entire senior year was all macro- and micro-algae focused, and I was thinking I could grow these for biofuel. I had kept a saltwater aquarium for three years at that point, and I had fallen in love with the hobby. I started with a 55-gallon aquarium, and then the concept of a refugium caught my attention. They didn’t seem very popular; not a ton of people were using them. Refugia were kind of relegated as an afterthought: ‘Oh, you have a tank and you might want to keep a mandarin [dragonet]? That’s when a refugium is really good, to feed your mandarin.'” 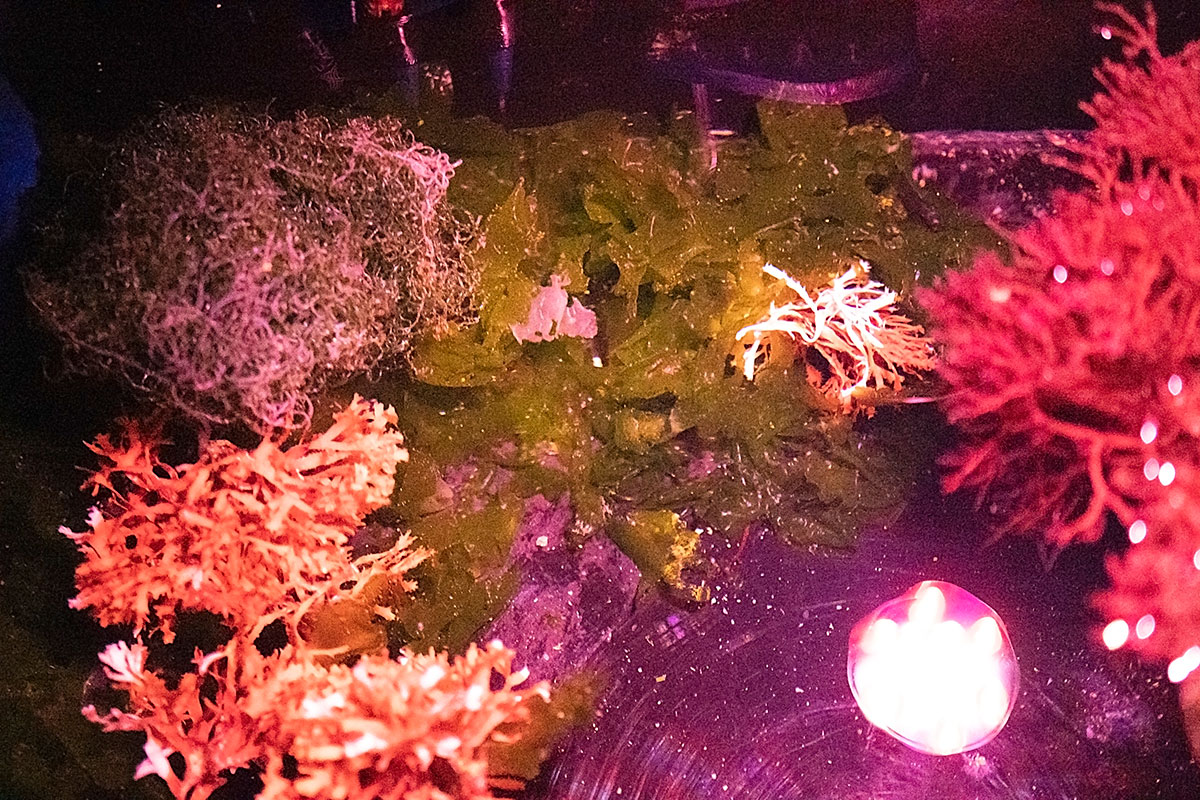 Still a relatively new aquarist, Tadjeran started to see a field ripe for innovation. “Everyone said, ‘This is a hard hobby,’ but the voice in the back of my head said, ‘You can do it!’ Meanwhile, I was being trained as a biochemical engineer to view everything as a process, with inputs, outputs, generation and accumulation.”

Suddenly, Tadjeran’s engineering education and the natural processes of growing algae clicked in a way they hadn’t before. “Chaetomorpha cleans the water by consuming the exact waste nutrients that served as fuel for nuisance algae. Refugiums offered much more than just a way to cultivate microfauna such as copepods to feed mandarins, they could be utilized as a highly reliable biological reactor automating mundane but necessary processes to keep a thriving reef aquarium.” 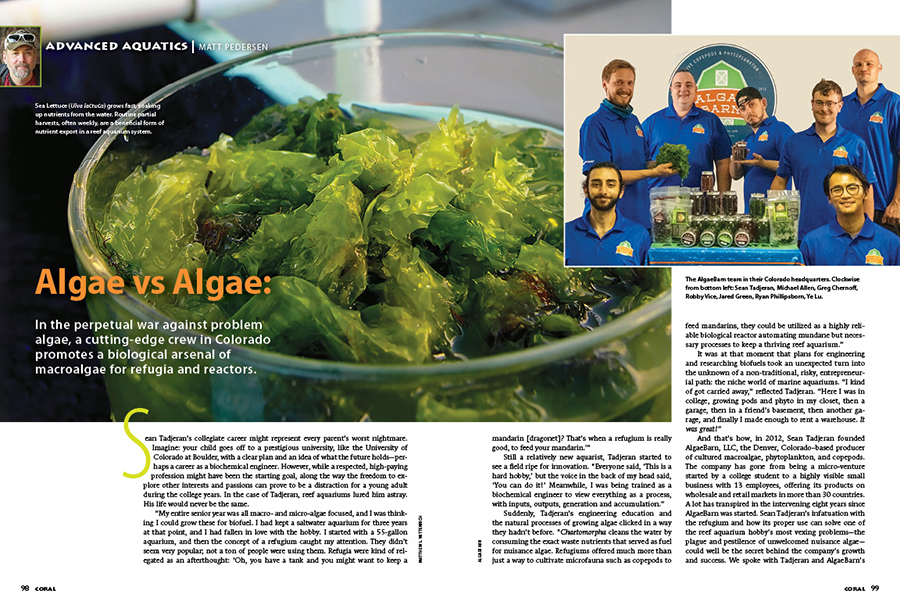 Find the full article by Matt Pedersen in the September/October 2020 issue of CORAL.

It was at that moment that plans for engineering and researching biofuels took an unexpected turn into the unknown of a non-traditional, risky, entrepreneurial path: the niche world of marine aquariums. “I kind of got carried away,” reflected Tadjeran. “Here I was in college, growing pods and phyto in my closet, then a garage, then in a friend’s basement, then another garage, and finally I made enough to rent a warehouse. It was great!” 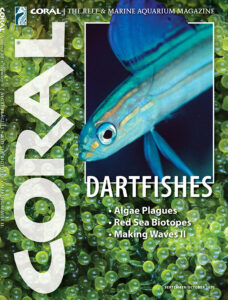 Algae vs Algae and more valuable content is headed your way in the September/October 2020 issue of CORAL. Subscribe or renew today!

And that’s how, in 2012, Sean Tadjeran founded AlgaeBarn, LLC, the Denver, Colorado-based producer of cultured macroalgae, phytoplankton, and copepods. The company has gone from being a micro-venture started by a college student to a highly visible small business with 13 employees, offering its products on wholesale and retail markets in more than 30 countries. A lot has transpired in the intervening eight years since AlgaeBarn was started. Sean Tadjeran’s infatuation with the refugium and how its proper use can solve one of the reef aquarium hobby’s most vexing problems—the plague and pestilence of unwelcomed nuisance algae—could well be the secret behind the company’s growth and success.

Learn more, in the current issue!

CORAL Magazine Sr. Editor Matt Pedersen spoke with Tadjeran and Algae Barn’s Greg Chernoff to discover their anti-algae weapons and hear how they suggest wielding them in the perpetual war against problematic algae in the marine aquarium. Look for the full interview in the new September/October 2020 issue of CORAL.