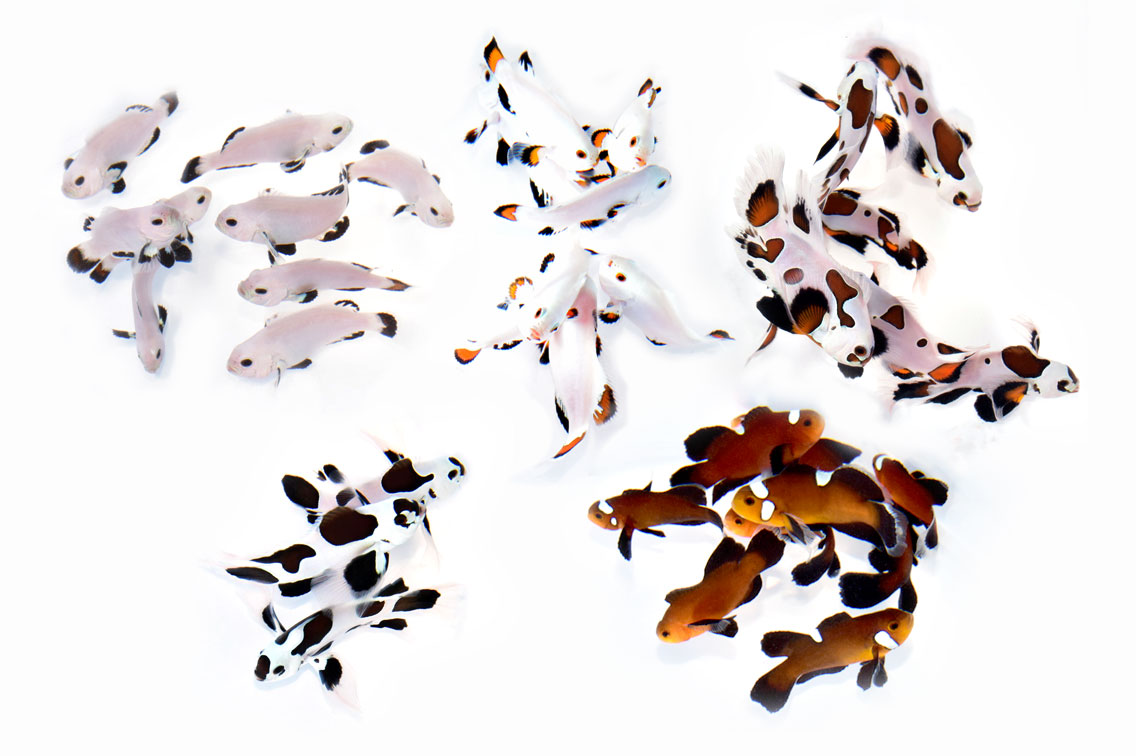 Proving that not even a pandemic will slow down the pace of marine ornamental aquaculture progress, Sea & Reef Aquaculture has released several new types of designer clownfish in the first half of 2020. Capitalizing on random mutations discovered during the course of routine breeding operations at the Maine-based hatchery, Sea & Reef Aquaculture founder Soren Hansen has helped lead the expansion of the designer clownfish marketplace. Every new Sea & Reef introduction released so far in 2020 represents the breeder’s intentional combination of multiple mutant genes. This is the logical progression of ornamental marine fish aquaculture, where new genes are first discovered, and then mixed into the genetic soup to discover new forms and appearances.

It’s amazing to think that not only are there two distinct forms of “longfin” clownfish but that the flowing and rounded fins found in descendants of Sea & Reef Aquaculture’s breeding all stem from just a single specimen that was isolated in 2013. As a matter of marine fish breeding history, Sustainable Aquatics first revealed a different, more stiff and spiky longfin mutation, but arguably the more flowing, rounded “long fins” discovered by Sea & Reef may wind up being the preferred gene. Commercial and private aquarists continue to tinker with the genetics of the Ocellaris and Percula complex of clownfish, which are regarded as the marine aquarium hobby’s equivalent of the guppy, and Sea & Reef has released many new designer clownfish in recent months.

Of particular note, the last few months have seen an expansion of Sea & Reef Aquaculture’s longfin clownfish lines. Outcrossing between genetic lines has furthered the multi-gene phenotypes to create both a Longfin Black Storm and a Longfin Mocha Storm Clownfish. Furthermore, a Longfin Domino Clownfish has been introduced. These three new longfin clownfish introductions are the result of three distinct breeding projects. 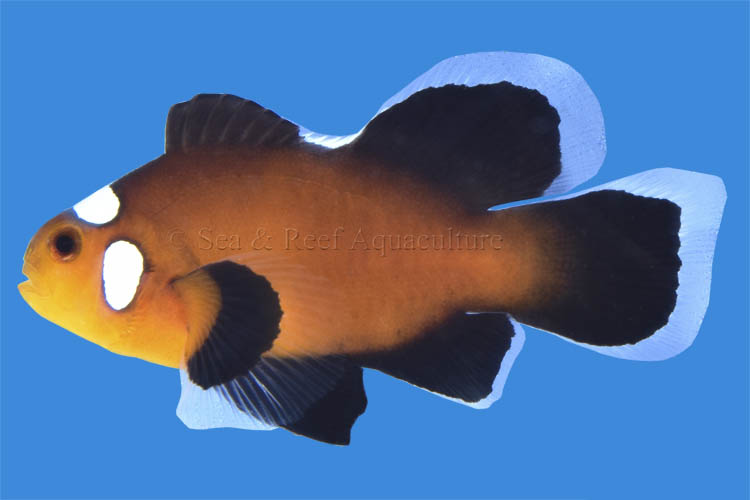 The first new longfin clownfish variant for 2020 is the Longfin Domino Black Ocellaris.

The Longfin Domino was the first new longfin phenotype to be introduced in 2020. It carries the longfin gene and reduced striping genetics that approach the stripeless phenotype known as a Midnight. It has been revealed that this new variety was created by breeding the initial Longfin Black Ocellaris line with the well-established Domino Ocellaris.

While the stock photos suggest a more “Mocha” phenotype (the result of intermixing between Orange and Black Ocellaris populations), there is no “Mocha” in the mix…these are straight Darwin Black Ocellaris. Current WYSIWYG offerings on Sea & Reef’s website show darker fish, which are typical of the juvenile coloration of Black Ocellaris phenotypes. 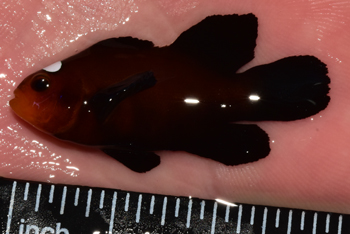 Ultimately, the Longfin Domino Clownfish should mature with deep black base coloration, showing the vastly reduced stripes indicative of the Domino genotype. 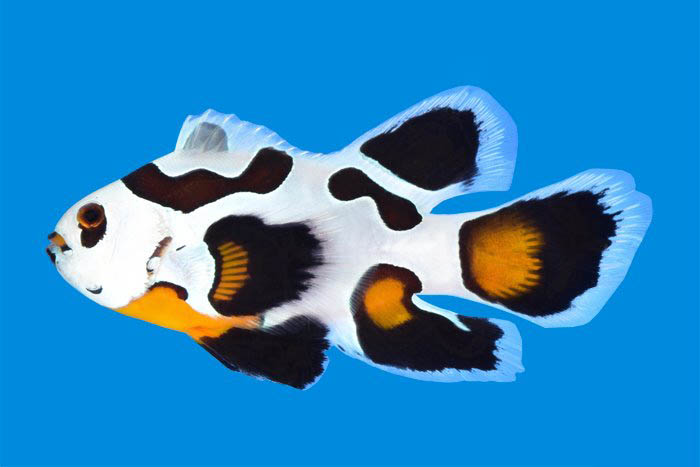 What is interesting to fish breeders is that when you start intermixing multiple genetic mutations, a wide range of phenotypes and associated genotypes are initially produced, meaning that there will be Mocha, Longfin Mocha, Mocha Storm, and Longfin Mocha Storm Clownfish all produced in each batch of offspring. 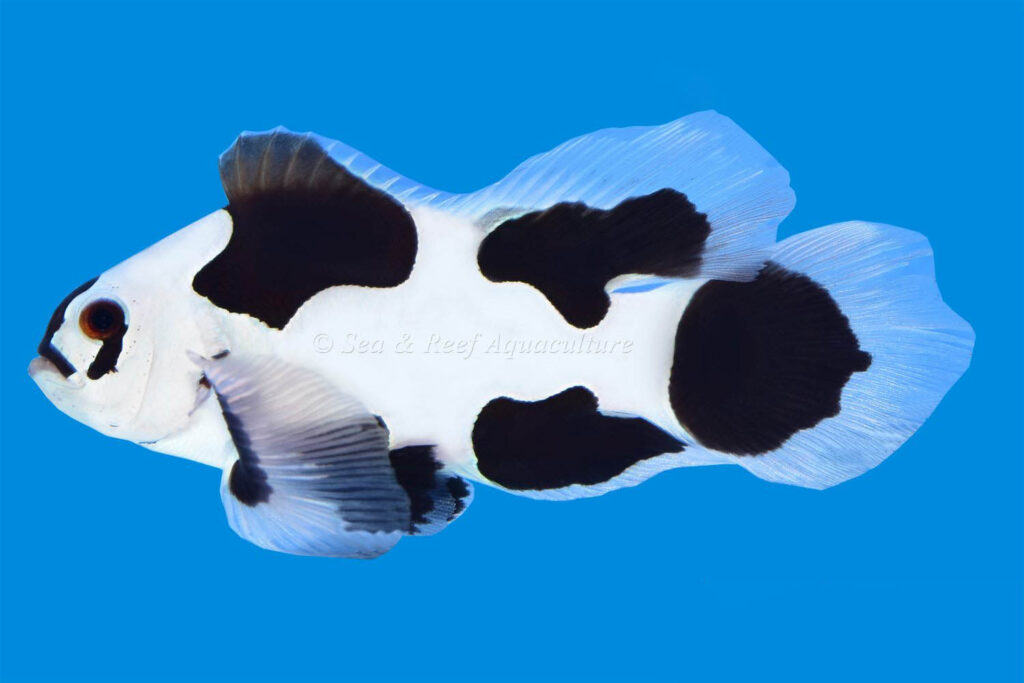 The addition of the longfin gene brings a new dynamic to the original Black Storm Clownfish.

On the heels of the Longfin Mocha Storm, Sea & Reef then introduced the Longfin Black Storm. This is considered to be the 8th type of longfin clownfish variety to be created by the breeding program at Sea & Reef Aquaculture. However, the distinction between the “Premium” and “Normal” Longfin Black Ice Clownfish is probably one of grading, and not directly representative of different primary genetics.

Such breeding is likely to produce only 25% of the coveted new phenotype at best, with the rest being prior genetic combinations already in production. This explains why these new Longfin Storm Clownfish varieties will initially be in limited supply. Prices will follow accordingly, as with any new designer clownfish introduction. But that’s only part of the story.

“The reality is still that the percentage of Longfin Clownfish in each batch of larvae is still very small,” wrote Soren Hansen, Sea & Reef’s founder. “It is one of the reasons that it took us almost 5 years from when we found the one mutated Darwin Ocellaris and until our first release of a Longfin clownfish (The Black Ice Longfin) in October of 2018. The original pairing only produced a few Longfins in each clutch. In fact, some clutches had no longfins. So a lot of work went into increasing the percentage of longfins in each clutch (5 years worth of work!).”

Genetics predictions and reality are sometimes in opposition, which can skew the final results in breeding projects. Hansen emphasized that even now, they do not produce 25% Longfins in each batch of these new projects. “In fact, the number of longfins per clutch is still very small (although better than back in the days),” he concluded.

The Storm gene, although similar in outward appearance to the long-established DaVinci Clownfish, remains distinct in its tendency to push white coloration fully into the face of a clownfish.

These new introductions focus on the combination of two stripe-altering genes, similar in some regards to the twin genetic combination that drives the Frostbite genetics (found in fish possessing both the Snowflake and DaVinci genes) 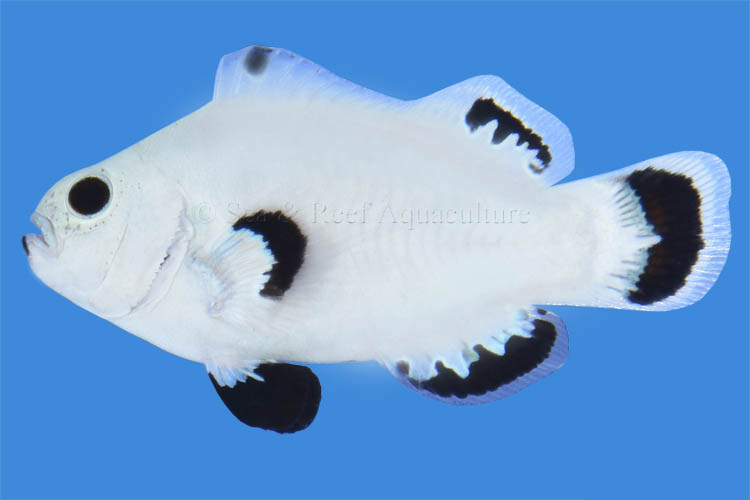 The name should have made the genetic combination rather obvious already: this is the combination of both the Storm and Snowflake genes, overlaid on a “black” base. Sea & Reef does not lay claim to the invention of the Snow Storm Clownfish; this combination was first introduced by Florida-based ORA in late 2019. 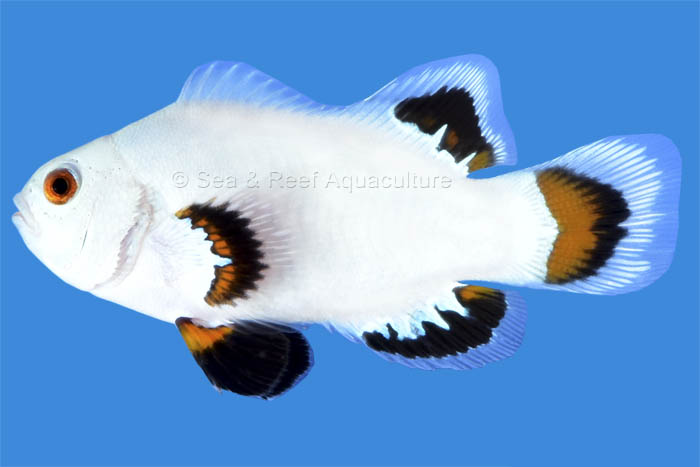 Ice Storm Clownfish are similar to the Snow Storm variety, but with a slightly different underlying base genetic makeup which allows for more orange coloration.

Officially, according to Sea & Reef, “The Ice Storm Clownfish was created by breeding one of our Mocha Storm Clownfish with a Black Ice Clownfish.” Based on that information, this fish retains the 50/50 mix, more or less, between Darwin Black and classic Orange Ocellaris genetics.

Knowing how Mocha and Black Ice Clownfish tend to darken over time, the initial orange coloration that distinguishes this variety from the Snow Storm Clownfish may become less notable as the fish mature. The change in stripe patterning is driven in the same manner as in the Snow Storm, and as such, the same 25/25/25/25 percentage of offspring and genotypes would have occurred with the production of this new variety as well.

Certainly, more new offerings will come from Sea & Reef, as ornamental clownfish carrying three or even four distinct mutant genes are  within the realm of possibility.