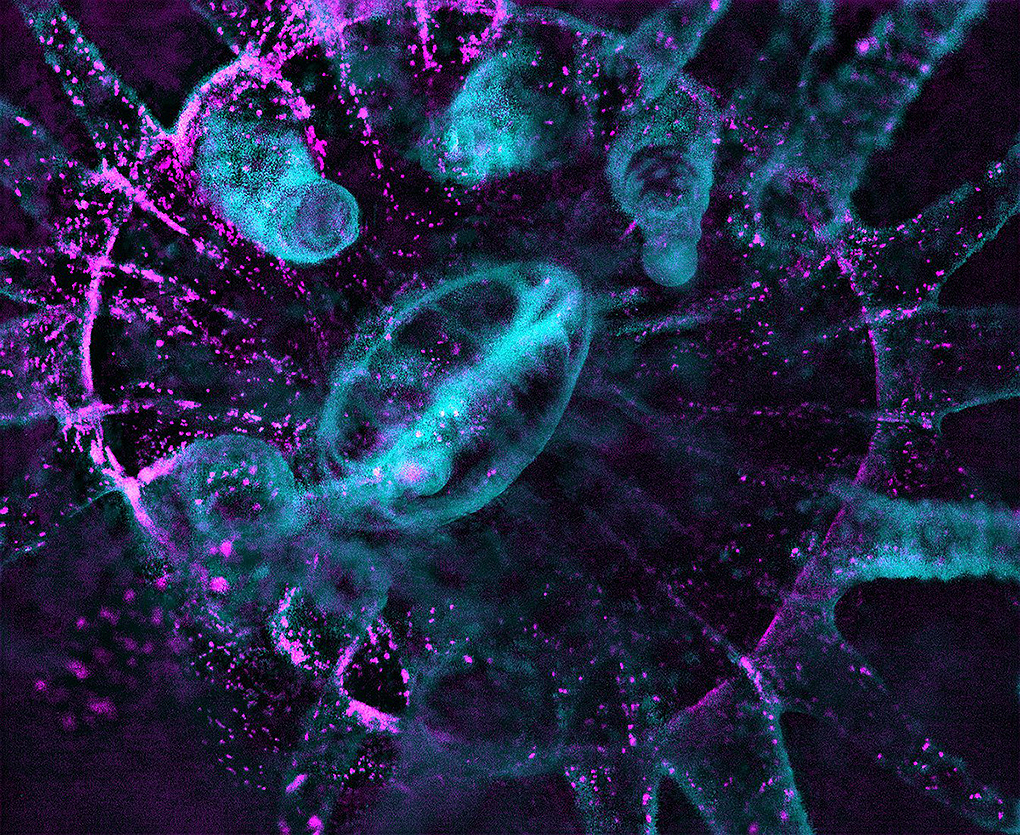 Darkfield imaging is used to reveal the non-autofluorescent coral tissue in the Northern Star coral (Astrangia poculata), a species with no intrinsic fluorescence. Non-fluorescent tissue (cyan) and algae (magenta) are combined in the image. Credit: Philippe Laissue, Scientific Reports, 2020

WOODS HOLE, Mass. – Corals are “part animal, part plant, and part rock – and difficult to figure out, despite being studied for centuries,” says Philippe Laissue of University of Essex, a Whitman Scientist at the Marine Biological Laboratory. Many corals are sensitive to bright light, so capturing their dynamics with traditional microscopes is a challenge.

To work around their photosensitivity, Laissue developed a custom light-sheet microscope (the L-SPI) that allows gentle, non-invasive observation of corals and their polyps in detail over eight continuous hours, at high resolution. He and his colleagues, including MBL Associate Scientist and coral biologist Loretta Roberson, published their findings this week in Scientific Reports.

Here is a video explainer of the research:

Coral reefs, made up of millions of tiny units called polyps, are extremely important ecosystems, both for marine life and for humans. They harbor thousands of marine species, providing food and economic support for hundreds of millions of people. They also protect coasts from waves and floods, and hold great potential for pharmaceutical and biotechnological discovery.

But more than half of the world’s coral reefs are in severe decline. Climate change and other human influences are gravely threatening their survival. As ocean temperatures rise, coral bleaching is afflicting reefs worldwide. In coral bleaching, corals expel their symbiotic algae and become more susceptible to death.

“The L-SPI opens a window on the interactions and relationship between the coral host, the symbiotic algae living in their tissues, and the calcium carbonate skeleton they build in real-time,” Roberson says. “We can now track the fate of the algae during [coral] bleaching as well as during initiation of the symbiosis.”

Roberson is also using Laissue’s imaging technology to measure damage to corals from “bioeroders” – biological agents like algae and sponges that break down a coral’s skeleton, a problem exacerbated by ocean acidification and increasing water temperatures.