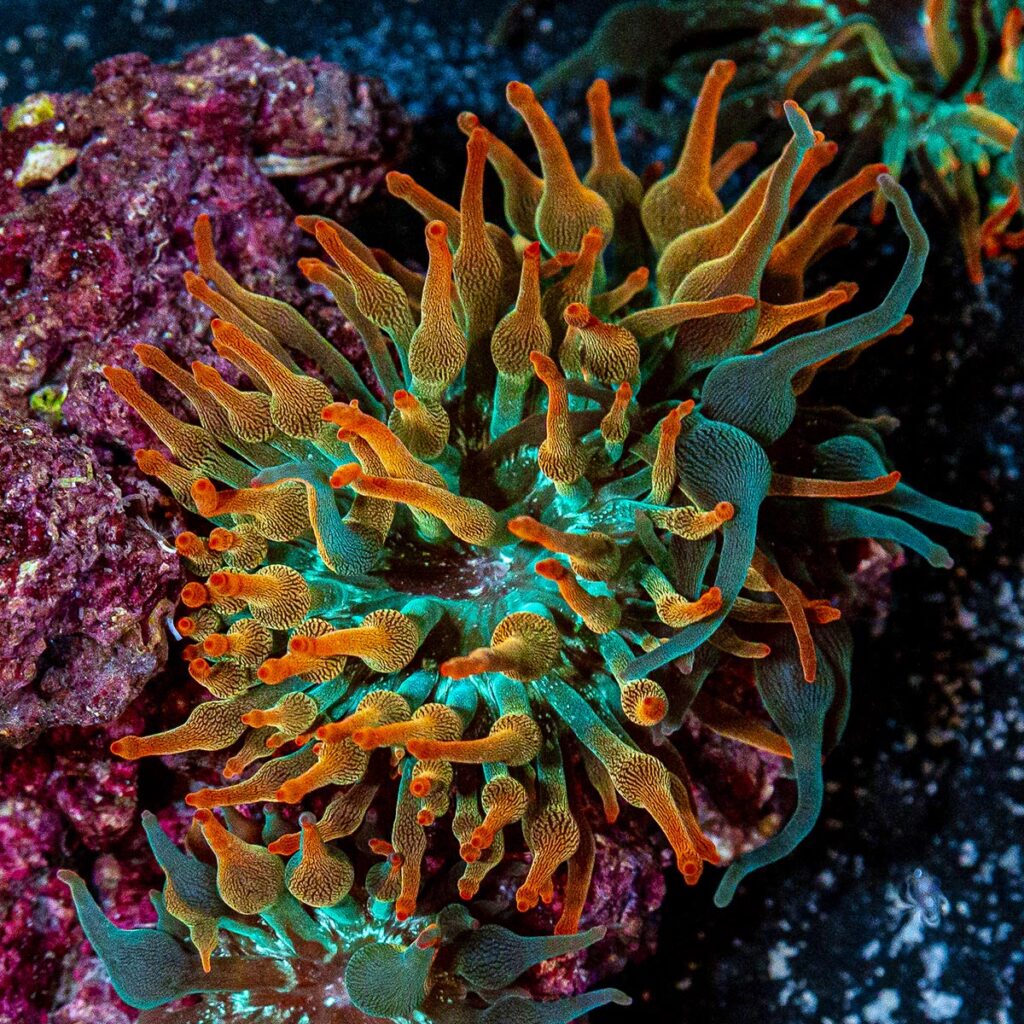 The Bubble Tip Anemone that may well ruin all other bubble tip anemones for you: Eye Catching Coral’s new Nexus Burst BTA.

Now, for the rest of the story… 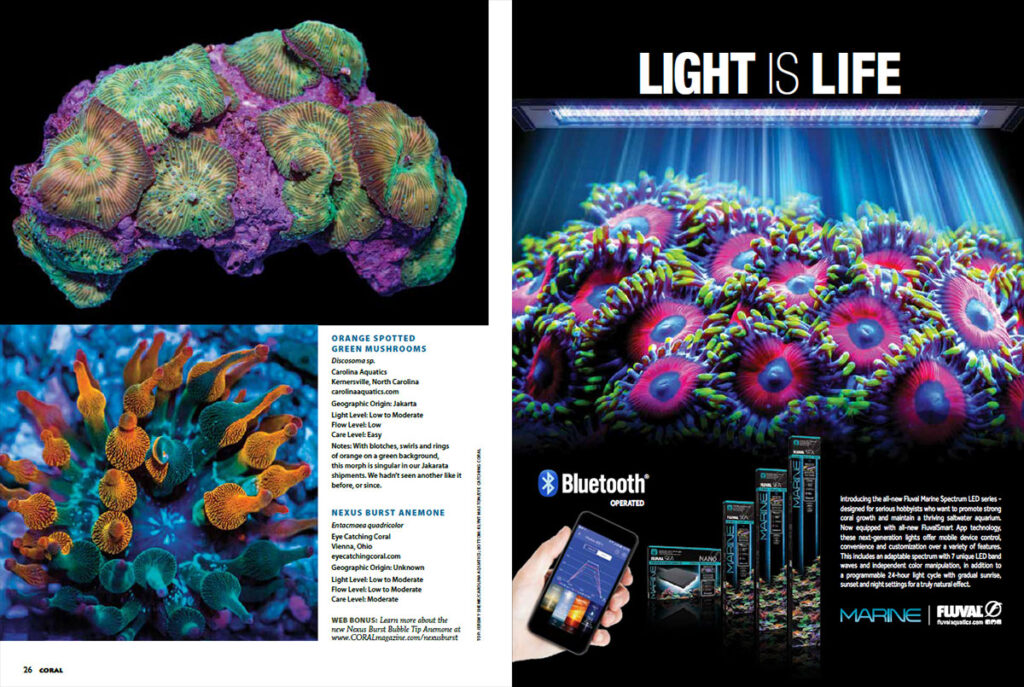 From the lower portion of page 26 in the July/August 2020 issue of CORAL, Eye Catching Coral’s Nexus Burst Bubble Tip Anemone (Entacmaea quadricolor) is the latest one-of-a-kind BTA for aquarists to scramble over.

Eye Catching Coral’s (ECC) newest anemone cultivar is a riotous spectacle of color. Furthermore, no two are ever alike, making them truly one-of-a-kind works of biological art, straight out of Mother Nature’s studio. The moment ECC submitted a couple of images as possible candidates for the Reef Visions column in the July/August 2020 issue of CORAL Magazine, we knew that there was no way to convey the back story of this remarkable cnidarian in just a few short sentences. 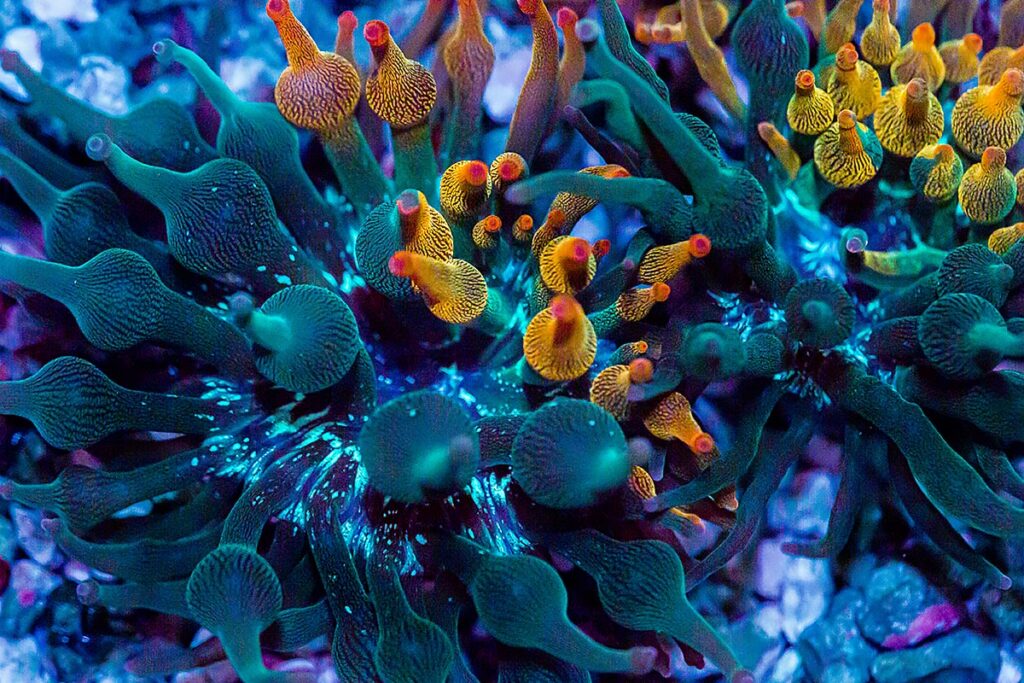 Conversing with ECC’s director, Jim Gintner, we learned a little more about the anemone’s husbandry. 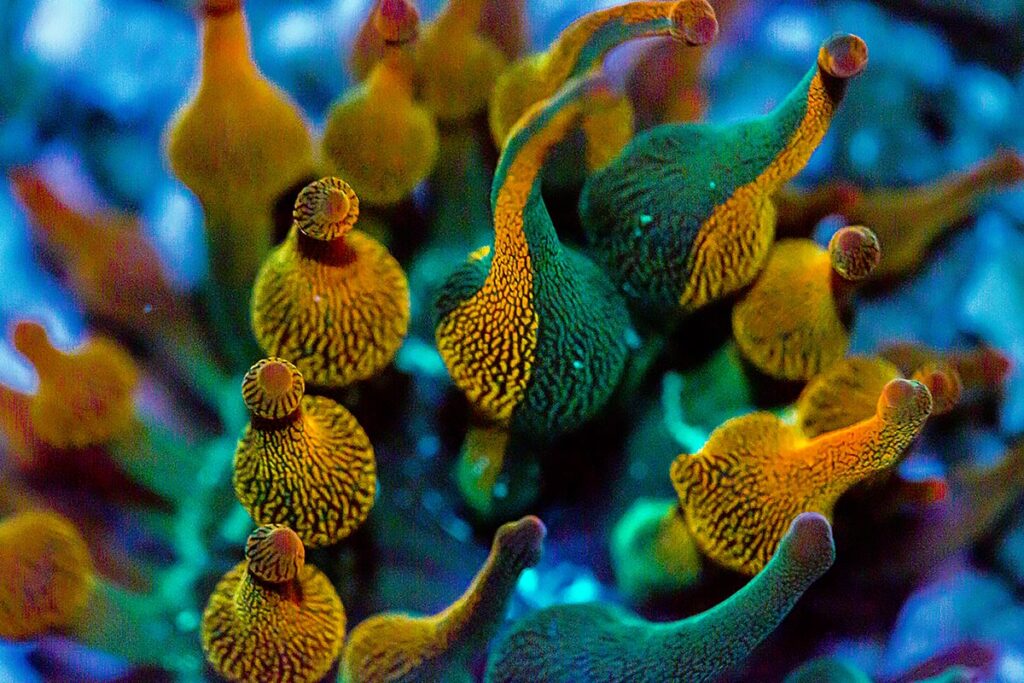 Up close with the Nexus Burst Anemone.

The Quiet History Behind the Nexus Burst Anemone

As far as where these anemones came from and how they’ve come into cultivation, much can be learned from a statement released by Gintner. 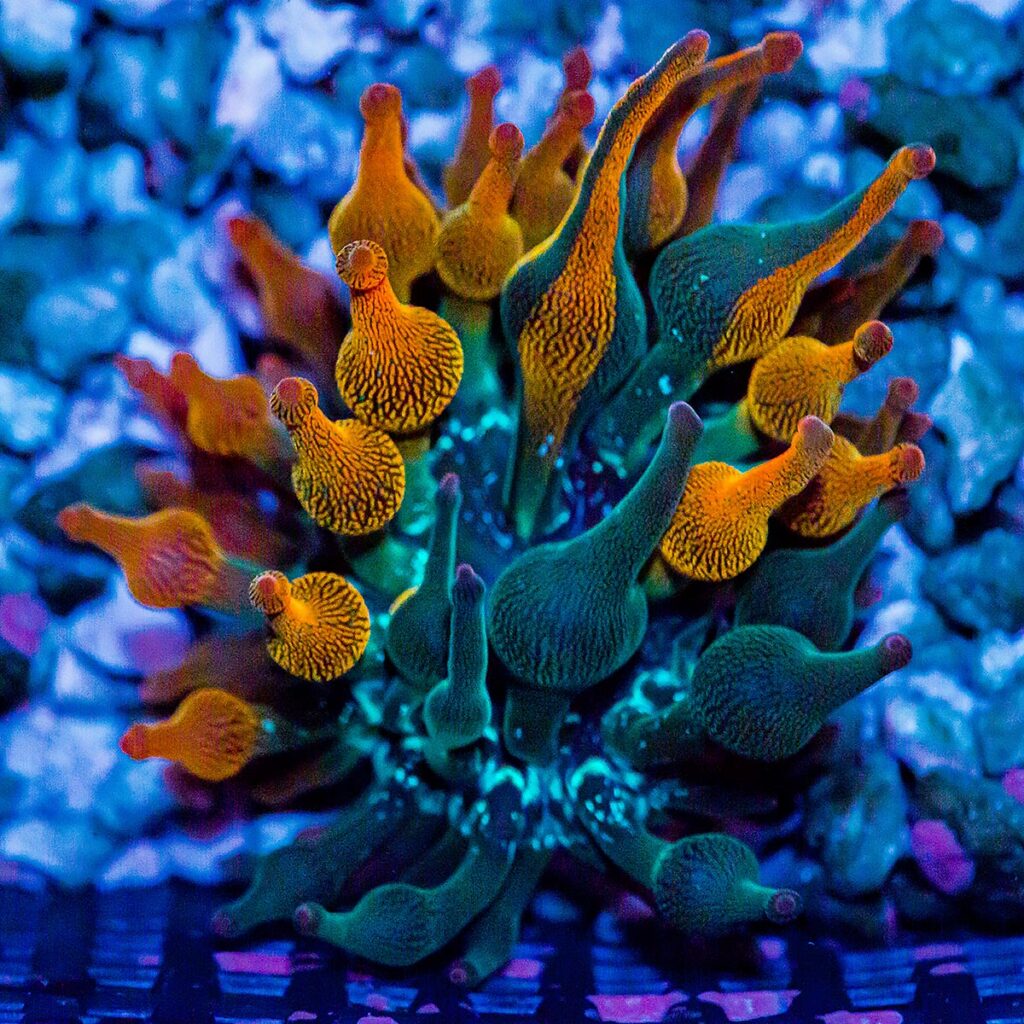 The mixing and swirling of green and orange coloration is unique in every individual Nexus Burst Anemone.

“When we were first offered these anemones, we were very concerned that they would not keep their color. Having seen thousands of anemones, we had never seen anything like these, so it was really hard to believe. We feared it was due to light shading, photo editing, or maybe even a health issue. We also wondered if they would continue to hold their color over time and, after being propagated, would one color win or lose out? I reached out to most of my friends in the industry to get their input and almost no one thought they would keep their color. I was doubtful myself, but I couldn’t stop thinking about them. 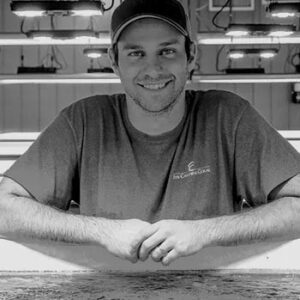 “I traveled to see them and inspect them in person. It just so happened I was on a vacation only a few hours away from the shop offering them for sale (The Coral Connect in Dania Beach, FL.)

“Once I saw them in person I knew I couldn’t pass them up. They were in great health and well looked-after. We decided to take the risk and purchase the anemones and naming rights to them.

“Fast-forward almost 18 months, and I am glad to report we have had tremendous success with them. They have kept their color well and have been great growers. We now have over 25 of these anemones since acquiring our original two.” 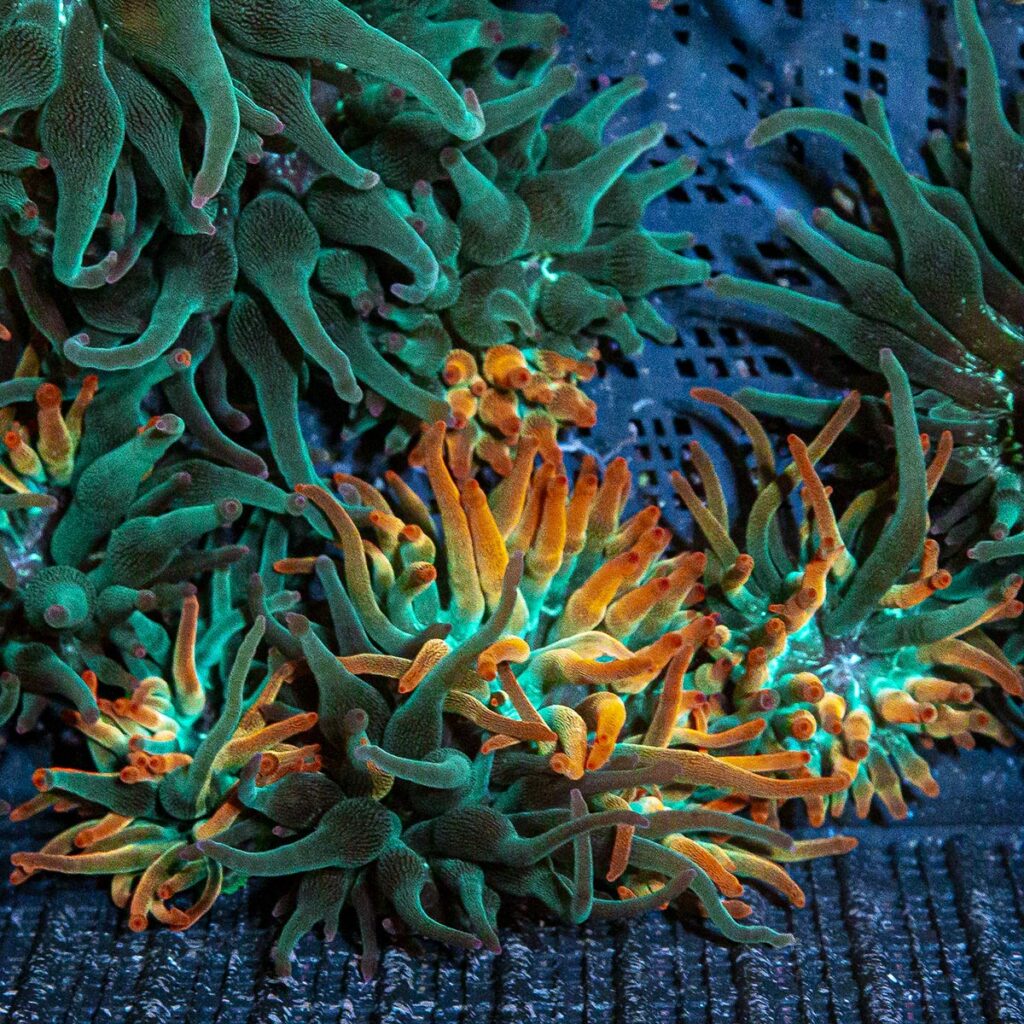 “This particular strain stays much smaller than other strains of BTAs we are currently farming. This presents a challenge for us, as they often split before growing to a large enough size to safely manually propagate by cutting. We would prefer to cut them, as this allows us to ensure both colors remain in the anemone.” 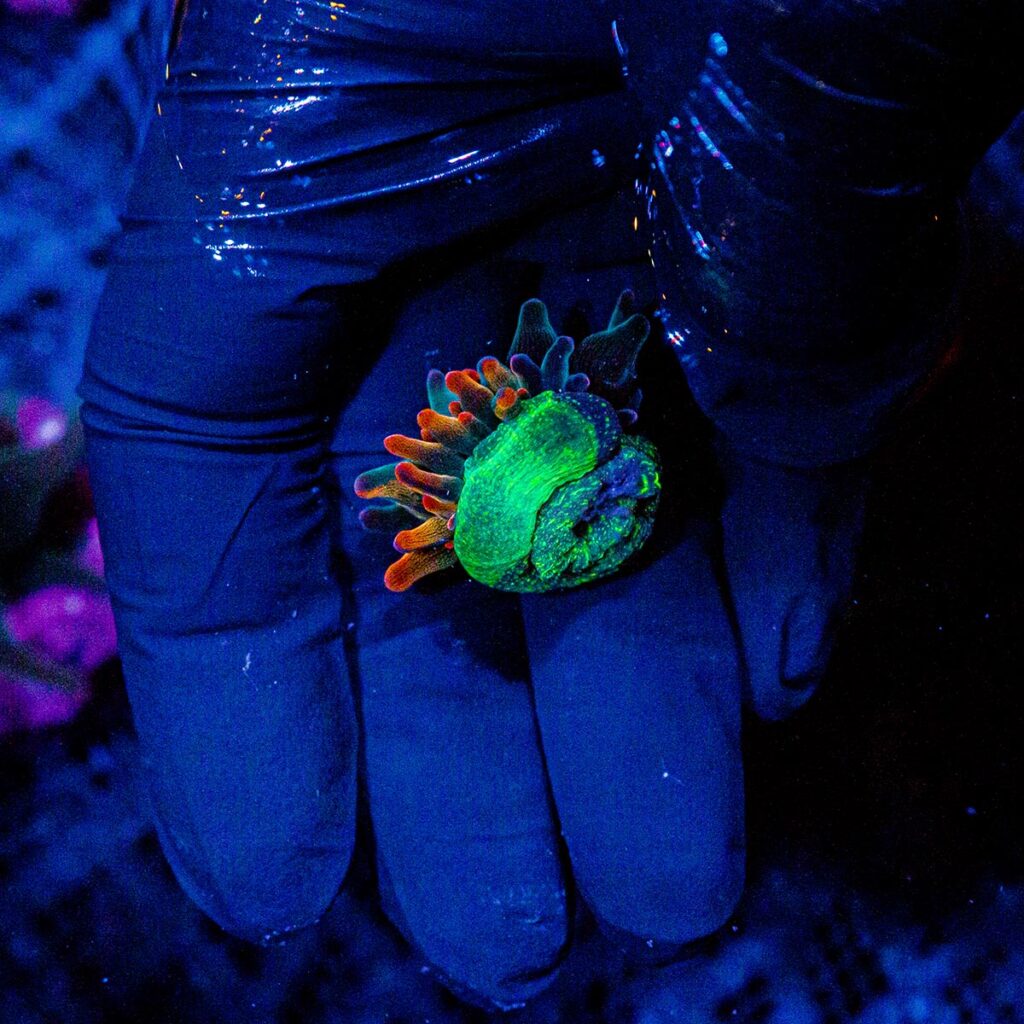 “When they split on their own, it is completely random as to whether they will keep the 50/50 color or not. We have many that are 50/50, some 100/0, and most that are somewhere in between. This is going to make pricing each one of them fairly a challenge.” 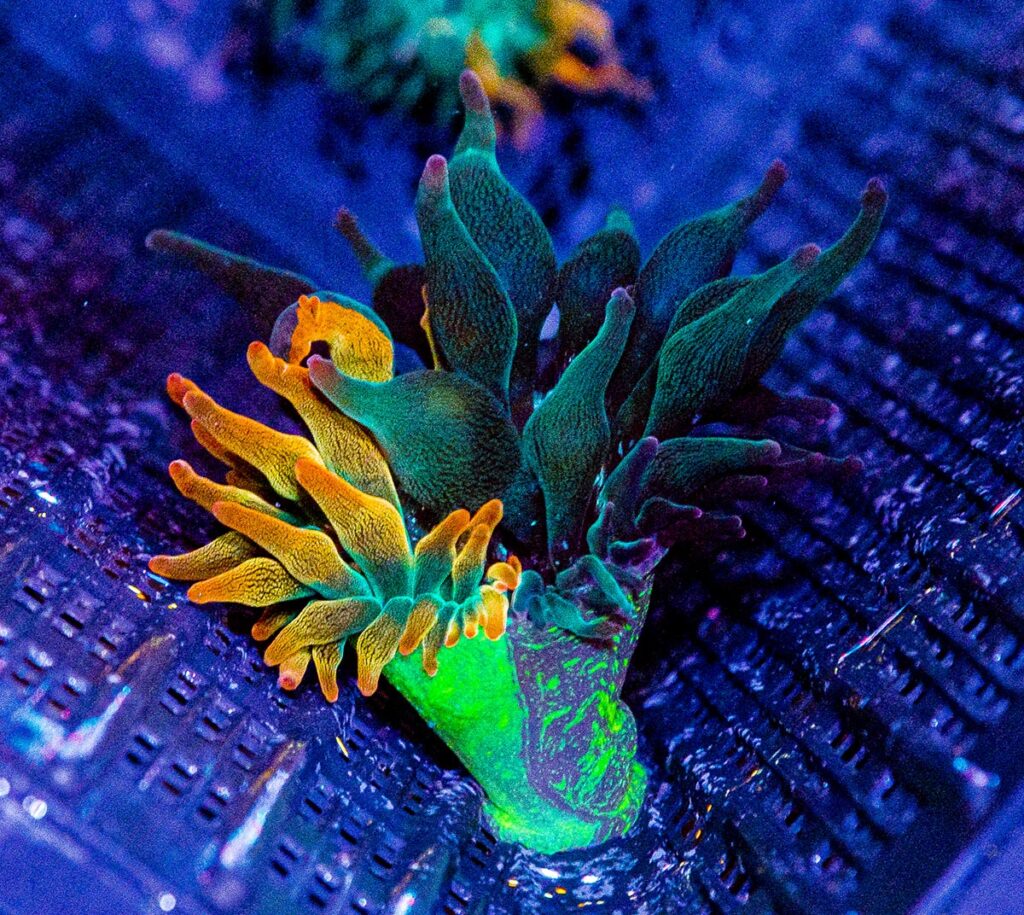 “Overall, we are very pleased with how they are doing for us. Our team has worked very hard to care for them. We are proud to offer them soon and share them with the hobby.”

While quantities have increased, limited availability of this morph means the rules of supply and demand are in effect. Eye Catching Coral expects that the most aesthetically interesting individuals may fetch retail prices ranging from $1,500 to $3,500 depending on retailer markups.