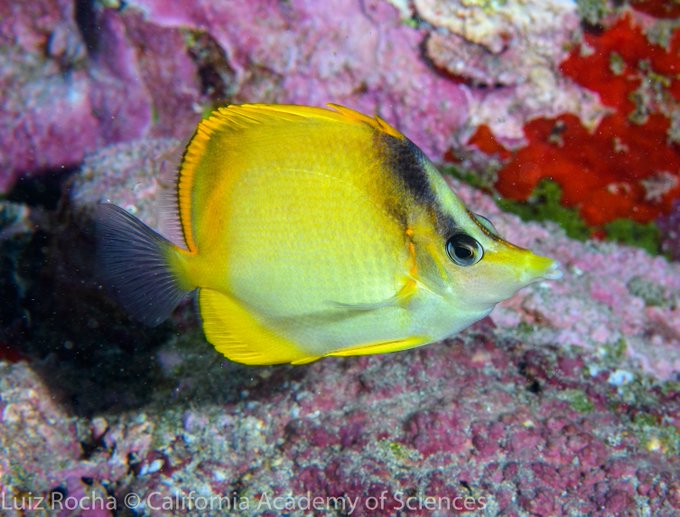 The Brazilian Butterflyfish (Prognathodes brasiliensis), shown here at Trindade Island, has been illegal to export from Brazil in recent years. Changes to Brazil’s export laws could allow for rarities like this to find their way into aquarium collections. Image Credit: courtesy Luiz Rocha, PhD.

Brazil is primarily known for a dizzying diversity of freshwater aquarium species, including iconic species like the Imperial Zebra Pleco, Hypancistrus zebra, also known simply as L46. Lesser known, however, are Brazil’s tropical marine fishes; this is mostly because prior regulations kept some species entirely out of the aquarium trade, while others were readily available from other Caribbean sources.

In the past, Brazil had implemented what many would call a “white list” approach, whereby only a listed species could be exported, which severely restricted the growth of viable and sustainable aquarium fisheries when more diverse offerings were available from other South American countries. This approach also resulted in the laundering of prohibited Brazilian species via exportation through neighboring countries, primarily featuring high-demand, off-limits endemic species like the aforementioned Zebra Pleco.

The Goldline Neon Goby (Elacatinus figaro) is a Brazilian endemic species prohibited from export, but it is readily available in the aquarium trade as the result of decades of commercial captive breeding. Image credit: Rzpguimaraes, CC BY-SA 3.0

A recent legal change to Brazil’s export policies governing live fish destined for the aquarium trade could change that, presenting new opportunities for marine aquarium fishes from the southwestern Atlantic to make their way into home aquariums. One might speculate that the more permissive exporting format might disincentivize smuggling operations as well. AMAZONAS Publisher and Editor Stephan M. Tanner Ph.D. and Dr. Leandro Melo de Sousa (one of the people responsible for the new rule) have compiled an English translation of the original Portuguese-language policy, which went into effect May 1st, 2020. The translation and a link to the original text can be found here. An in-depth examination from Tanner and Sousa is published in the July/August 2020 edition of AMAZONAS.

In the new policy, Brazil has created several common-sense processes for allowing the commercial exploitation of species that might otherwise not be permitted. This includes those that have yet to be formally described (mainly a problem with freshwater species), but also those that might otherwise exist on a “red list” of species that by default are not allowed for commercial collection and export, through a series of individual evaluations. Captive breeding also has prominent support in the new rules, and may be another pathway to market for species that would not otherwise be allowed for export. In addition, clear rules are laid out for the proper (and prohibited) collection methods of marine fishes.

On a quick review of past information, a few Brazilian marine fishes may be affected by this rule change. While Brazil has always exported marine aquarium fishes, some of Brazil’s fishes were prohibited from export, including a range of blennies, parrotfishes, grunts, boxfishes, burrfishes, jacks, and groupers; these are not popular aquarium fishes to begin with, and they were also readily available from other sources. Wide-ranging, popular species such as the Queen Angelfish (Holacanthus ciliaris) were readily available from other locales, although Brazilian Queen Angels have a certain stature and cult following, with some suggesting that they are more vivid in coloration.

However, other species—Brazil’s endemics—were squarely out of reach for aquarium hobbyists. From Gasparini et al., 2018, the endemic species prohibited from export include:

Some of these species have been in the aquarium trade before, and as a result of the rule change, we could see their return to availability again. 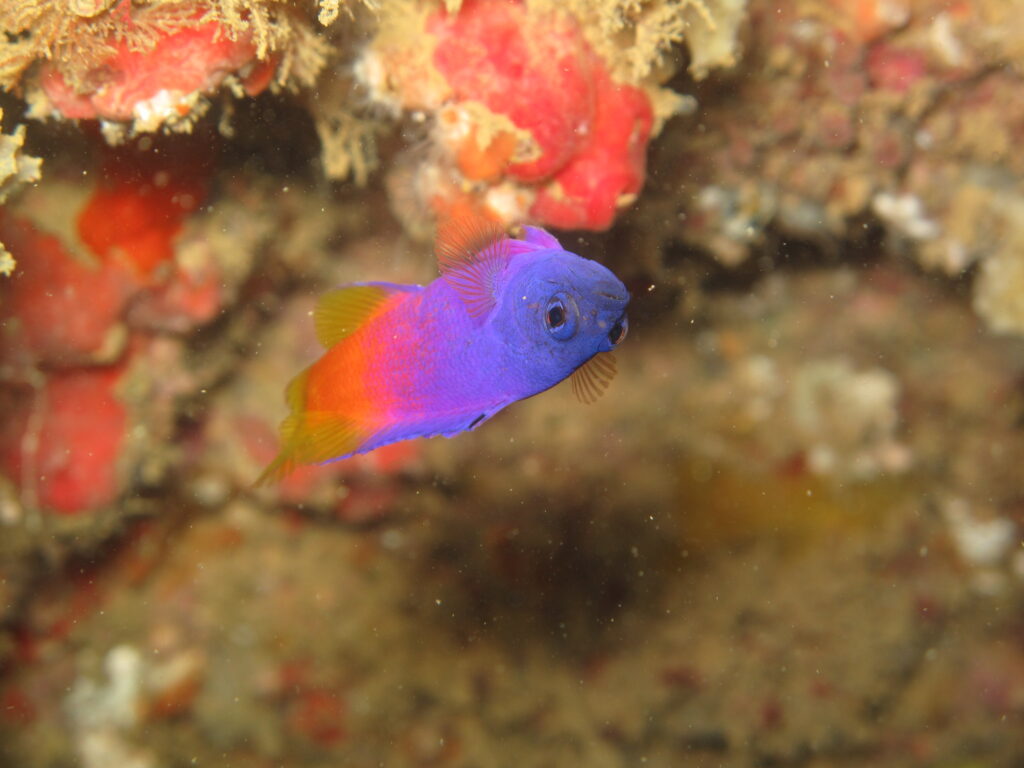 A sister species to the well-known Royal Gramma (Gramma loreto), the endemic Brazilian Gramma (Gramma brasiliensis) orients its belly to the bottom of an overhang on a reef off the coast of Espírito Santo, Brazil. This species had been in the trade prior to being banned, and thus could once again become available. Image credit: Daniel Filgueiras, CC BY 2.0

Some of Brazil’s endemics may remain unobtainable. For example, Bodianus insularis, Prognathodes obliquus, Stegastes sanctipauli, and the Koi variations of Queen Angelfish, which are found exclusively at St. Paul’s Rocks, will likely remain off-limits, as the revised rules prohibit “specimens collected on oceanic islands, for marine, and estuarine species” (Chapter II, Article 3, section IV). As mentioned earlier, however, there are pathways by which these fish could be made legally available outside of this general restriction. Common sense does seem to play a role in Brazil’s new decision-making process. 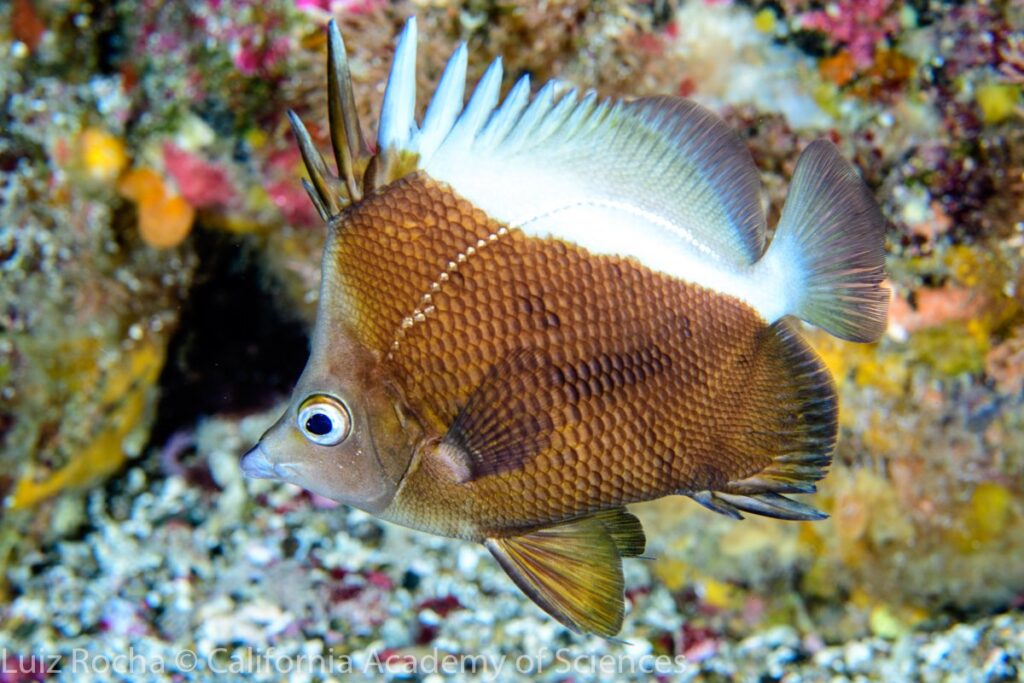 While the bright yellow Brazilian Butterflyfish could see a return to the aquarium trade, a double whammy of somber coloration and geographic restriction to the Saint Peter and Saint Paul Archipelago means that the Oblique Butterflyfish (Prognathodes obliquus) will likely remain uncollected by the aquarium trade. Image Credit: courtesy Luiz Rocha, PhD.

In addition to making some endemic species once again available in the aquarium hobby, the lifting of regulations on other species could add diversity to Brazilian exporters lists, helping to grow the industry. Ongoing COVID-19 pandemic-related transportation issues remain at this time, affecting the international trade in aquarium fishes. As a result, it may still be some time before we see special new fishes exported from Brazil arriving in the U.S. 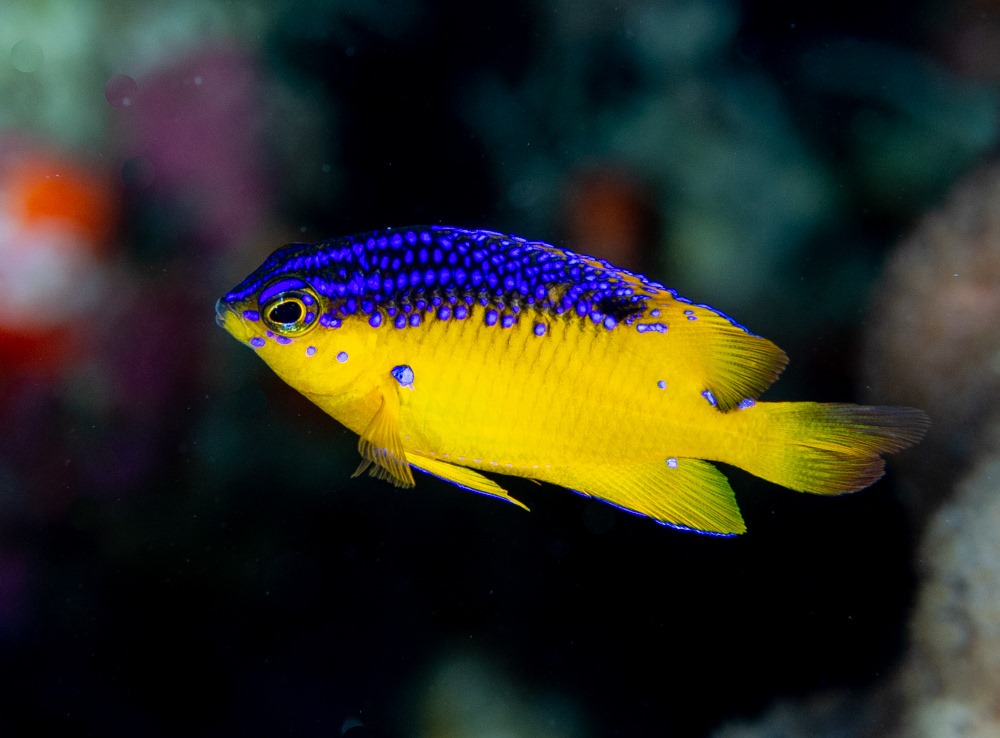 A Word of Caution for the Aquarium Trade

Sharing this news with Dr. Luiz Rocha, Associate Curator and Follett Chair, Ichthyology at the California Academy of Sciences (who provided several images for this story), one could sense both optimism and concern.

Rocha, a world-renowned specialist in the evolution and taxonomy of reef fishes, has spent time diving some of Brazil’s most remote reefs in search of new and interesting species. In his firsthand experience, he recounted that marine aquarium fishing in Brazil can be problematic. “I don’t know much about the freshwater trade, but the marine trade can be very damaging in some areas. Gramma brasiliensis is locally extinct in some places because it was collected too much. The same can happen with Elacatinus figaro if left unchecked. But all of this of course can be done in a sustainable way like they do it in Hawaii and even some places in the Philippines and Indonesia.”

As a friendly reminder, Rocha asked us to share this message with those in the aquarium trade: “Fisheries (both food and aquarium) in Brazil are very badly regulated. And by ‘badly regulated’, I mean not regulated at all, pretty much the opposite of Hawaii. So before every wholesaler in the US races back to get fishes from Brazil, try to make sure they were collected sustainably.”

Given that Brazil’s aquarium trade history, the aquarium trade is arguably getting a second chance. It would be wise to not squander this opportunity. 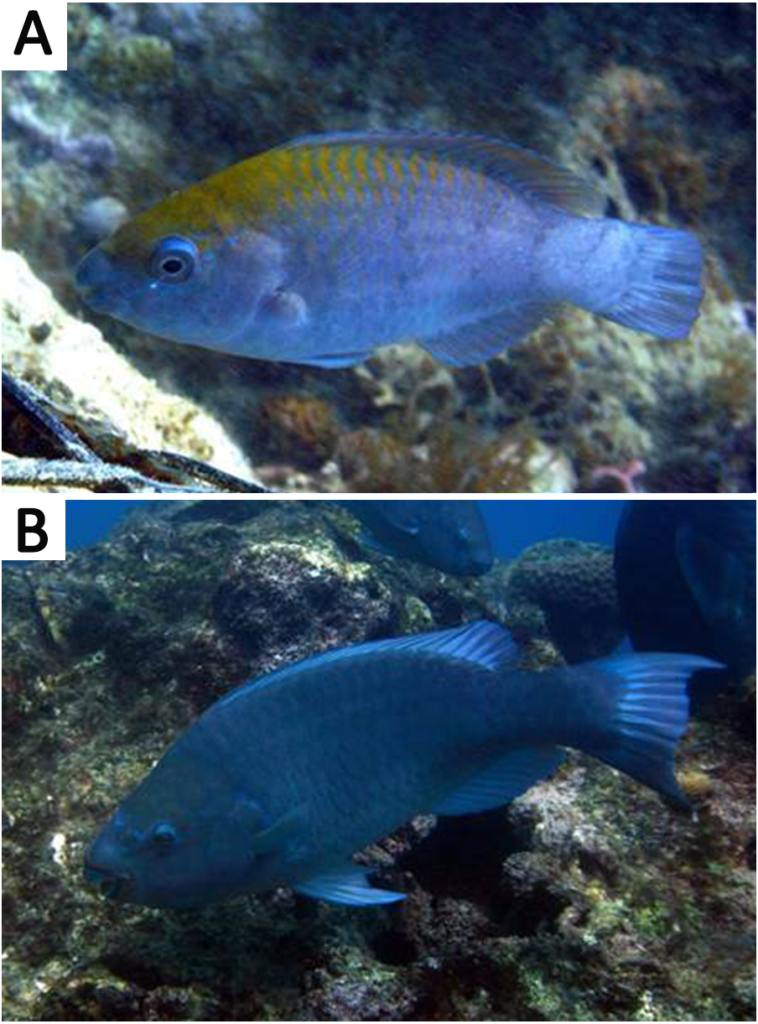 The Greenback Parrotfish (Scarus trispinosus) was prohibited from export, but that could soon change. Potentially growing up to 22 inches (56 cm), this is a beautiful, deep blue fish; whether it should ever be collected and exported for aquariums is a separate discussion. Shown here: (A) Juvenile specimen showing yellow area on nape. (B) Adult individual. Both images from the Abrolhos Bank reefs, Brazil. Photo by Ronaldo B. Francini-Filho. CC BY 4.0