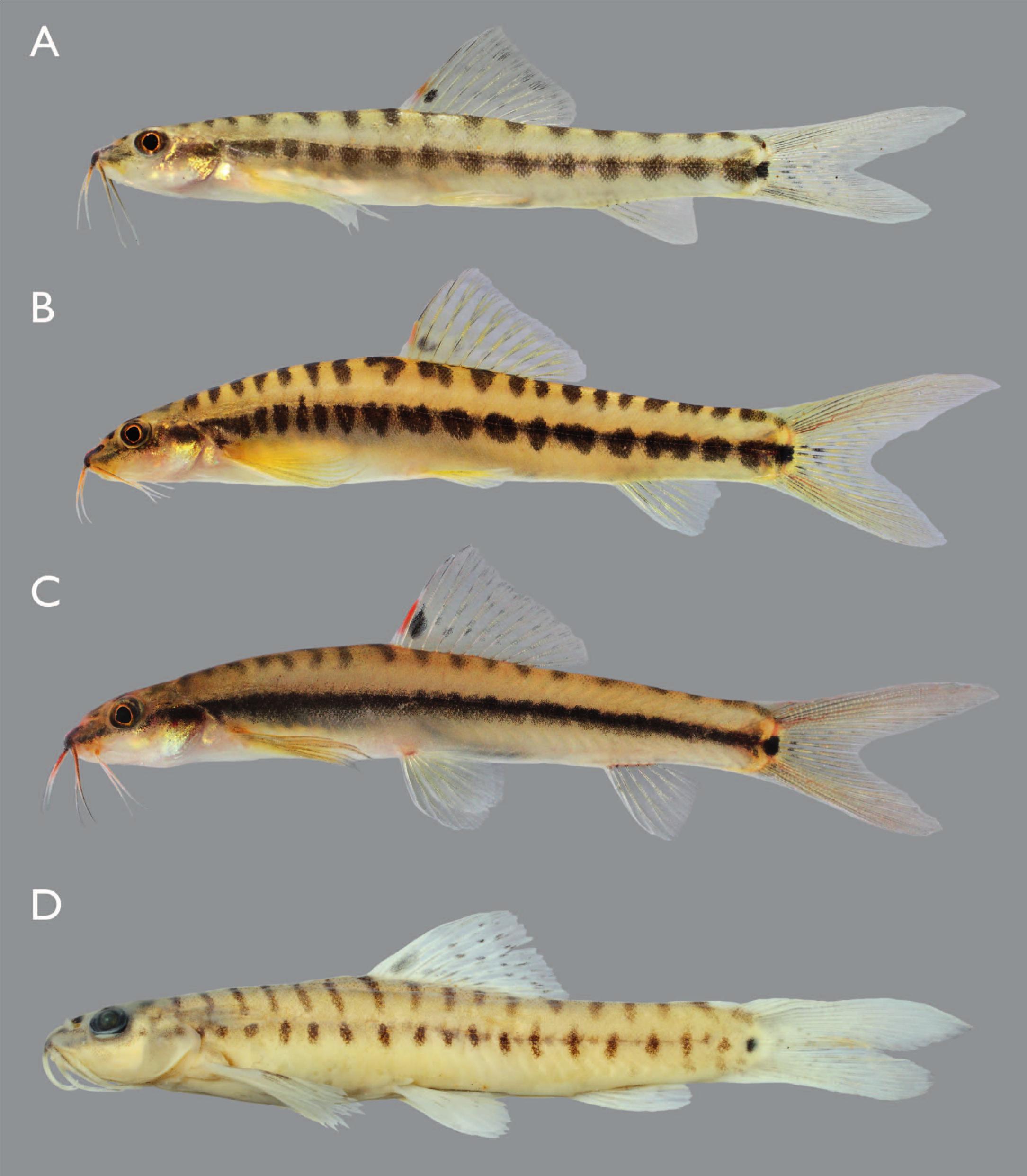 The inability to confidently identify several Nemacheilus loaches from certain drainages in Cambodia, Malaysia, and Thailand led to a molecular and morphological investigation that resulted in a recent publication in the journal Copeia by Dr. Larry Page and colleagues. The analytical results revealed a new species, Nemacheilus zonata, from the large tributaries of the Mekong River in Thailand. The data also indicated that N. pallidus Kottelat 1990 is a junior synonym of N. masyae Smith 1933 (the arrow loach) and that specimens of the N. masyae can exhibit a large range of variation in color patterns.

The basic color pattern of 14-19 dark lateral blotches and 13-16 dark dorsal saddles, a black spot at the caudal peduncle, and a dark spot on the anterior dorsal ray about one fourth the height of the ray are characteristics shared by N. pallidus and N. masyae that differentiated the species from other Indochinese species of Nemacheilus. When first described as a distinct species, N. pallidus was said to have a deeper body, eyes more on the side of the head, and lighter and thinner spots and saddles than N. masyae. The distributions of the two species also varied. Nemacheilus pallidus was described to occur in the Mekong basin in Cambodia, Laos, Thailand, the upper tributaries of the Chao Phraya, and the Mae Klong basins. Nemacheilus masyae occurs in the peninsular Malasia and Thailand, and also in the Mae Klong and Chao Phraya basins.

The present study examined the morphological variation of the species and found that the high variability in color pattern of N. masyae does not accommodate the separation of N. pallidus from N. masyae based on coloration. Body proportions differed by a slight, not statistically tested amount. Molecular data also did not support the separation of N. pallidus from N. masyae. Specimens that would have been identified as N. pallidus based on the original species description were nested in a large clade of N. masyae. 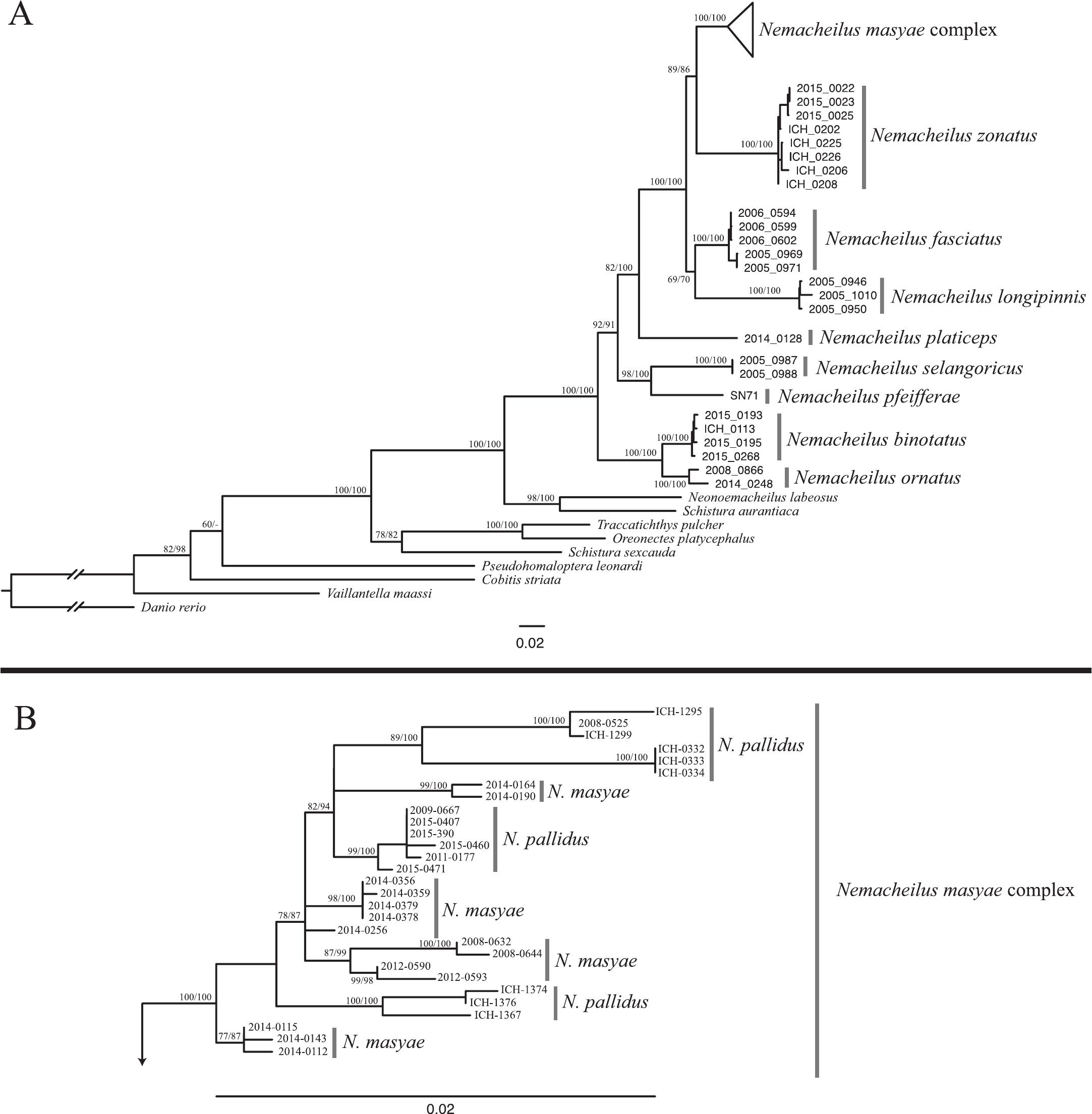 Although the phylogenetic analysis collapsed N. pallidus with N. masyae, the analysis also resulted in the resurrection of a new species. Nemacheilus zonatus formed a distinct clade, sister to N. masyae and morphological dissimilarity supports this distinction.

Nemacheilus zonatus is distinguished from all other species of Nemacheilus in southeast Asia by the presence of 8–12 thin dusky black bars (not blotches) along the side of the body that cross over the back and join the bars on the other side and its small body size. Nemacheilus zonatus (up to 29 mm SL) is smaller than its closest relative, N. masyae (up to 66 mm SL), and while N. zonatus is uniformly thinly barred, N. masyae exhibits black blotches along the side, a black saddle along the dorsal mid-line and a conspicuous black spot on the anterior dorsal fin rays. The novel species has a shorter snout, smaller gape, and several skeletal differences from its sister species.

In general, N. zonatus has a slender, slightly compressed body, pointed snout, slightly subterminal mouth with thin lips, and three pairs of barbels. It has a nearly translucent body with a light yellow dorsal region and 8-12 dusky bars, thinner than interspaces, on the side of the body and over the back. A black bar is present on nape, another between eyes, and an interrupted bar immediately behind nostrils. The side of the snout has a dusky black patch, and there is a bright yellow sheen on the cheek, opercle, and anterior part of lateral line. A bold, somewhat triangular black spot is found on the caudal peduncle. Halfway up the first ray of the dorsal is a bright red spot.

The known distribution of N. zonatus is from the Mun and Songkhram river drainages on the Korat Plateau of Thailand. The species was found in moderate flow areas with sandy substrate near the banks of the rivers.

The epithet zonatus is a Latin adjective meaning “banded” or “barred” and is in reference to the dark lateral bars that cross over the back and meet the bars of the opposite side.

Analyses of morphological and molecular data from recently collected specimens of Nemacheilus from Cambodia, Malaysia, and Thailand indicate that N. pallidus is a junior synonym of N. masyae, and an undescribed species of Nemacheilus occurs in large tributaries of the Mekong River in Thailand. The new species, described herein, is small—with a maximum-known standard length of 28.6 mm—and has a distinctive color pattern of dusky black bars along the side of the body that cross over the back and join the bars on the other side. Molecular phylogenetic analyses suggest that the new species is most closely related to N. masyae, which reaches a much larger size—to 66.2 mm SL—and otherwise is easily distinguished from the new species. The new species is known from the Songkhram and Mun river drainages in Thailand and appears to be restricted to the Khorat Plateau ecoregion of the Mekong River basin. Nemacheilus masyae occurs throughout mainland southeast Asia, including in the Chao Phraya, Mae Klong, Mekong, and coastal drainages of the Malay Peninsula.