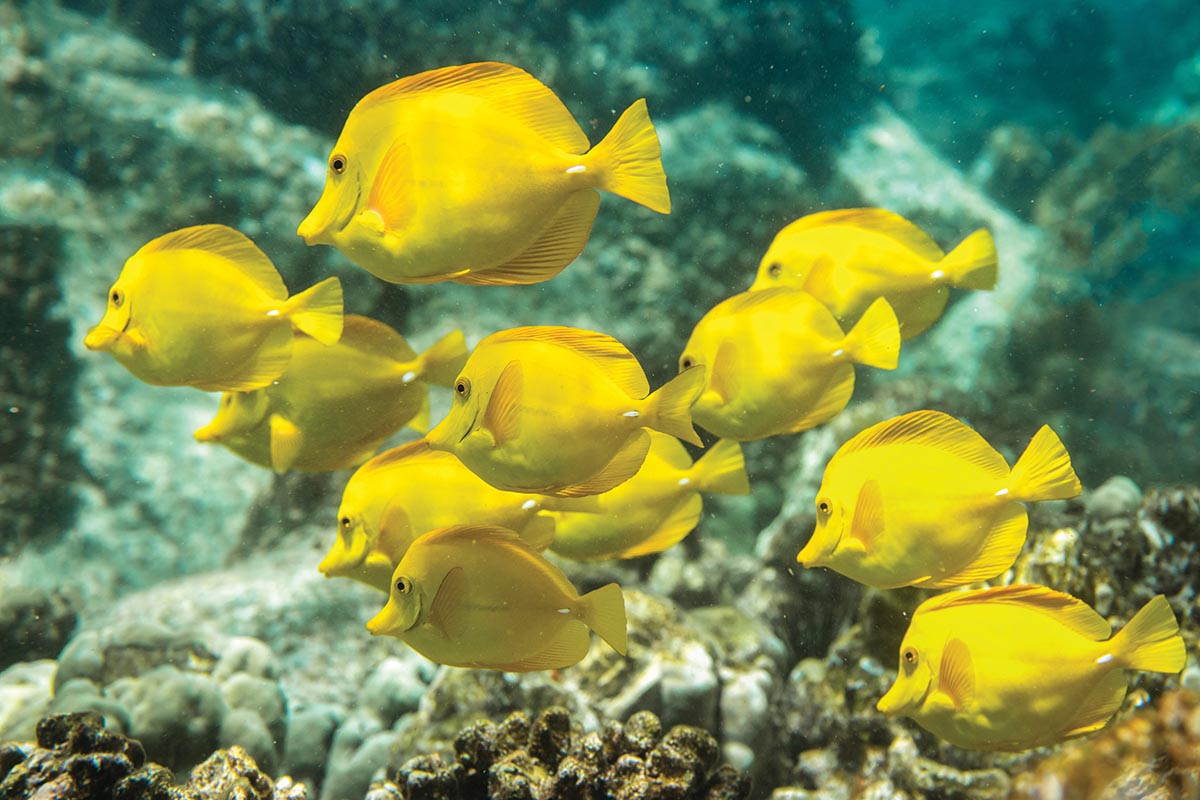 Hawaiian Yellow Tangs, the mainstay species for the Hawaiian aquarium fishery, which has lost another round to those calling for a ban on collection of live fishes.

May 23, 2020
Released by Hawai’i Board of Land and Natural Resources

(Honolulu) – In a 7-0 decision Friday, the Board of Land and Natural Resources (BLNR) voted to reject an Environmental Impact Statement (EIS) for proposed aquarium fishing in West Hawaiʻi. The over 2000-page EIS had been produced by a group of ten West Hawaiʻi aquarium fishers and the National Pet Industry Joint Advisory Council, on their proposal to ask the DLNR to issue permits to the ten aquarium fishers. The proposed permits themselves were not before the BLNR for decision.

The Supreme Court in 2017, in Umberger et. al vs. the Department of Land and Natural Resources, issued a decision requiring for the first time, Chapter 343 environmental review for the issuance of permits required to use fine mesh nets for aquarium fishing. No permits have been issued since the 2017 decision, though aquarium fishing using other gear, considered less optimal for aquarium fishing but not regulated under Hawaiʻi law, continues. The EIS was an applicant-action rather than an agency-action, meaning it was proposed by the aquarium fishers, not the Department.

After reviewing the applicant aquarium fishers’ proposal and testimony and deliberating for over four hours, the BLNR determined that the EIS did not adequately disclose the potential environmental impacts from the issuance of ten aquarium fishing permits for West Hawaiʻi.

Board Chair Suzanne Case stated: “This was a tough process and decision. But the unanimous vote clearly reflects the Board’s view that the aquarium fishers’ proposal, without meaningful limits on future catch, without enough attention to our highly depleted stocks like pākuʻikuʻi (Achilles tang) and other low-number species, and without adequate analysis of the near-future effects of climate change, ocean warming and coral bleaching on our reefs, did not adequately disclose the potential environmental impacts of the proposed ten permits.”

Hundreds of written testimonies were submitted to the BLNR, which is meeting online in response to COVID-19 stay-at-home orders. In a significant first for this state agency, the Land Board took oral testimony during the online meeting from over a dozen members of the community who signed up to testify live before the board on the matter.

PIJAC has issued the following statement this week in response to the decision of the BLNR:

The Pet Industry Joint Advisory Council and its members are disappointed with the Board of Land and Natural Resources’ decision to reject the Hawaii Aquarium Fishing Final Environmental Impact Statement. The Council and Hawai’i fishers have spent over two years and hundreds of thousands of dollars to develop an Environmental Assessment and Environmental Impact Statement analyzing the aquarium fishery, resulting in thousands of pages of analysis and multiple scientific peer reviews. The ten Hawai’i fishers whose livelihoods depend on this fishery will be significantly harmed by the Board’s decision. The decision likewise has serious implications for other commercial fisheries in Hawai’i. PIJAC and its members will continue to support sustainable fishery practices, and use of the best available scientific information in guiding management decisions.

EarthJustice: Hawai’i Land Board Says No To Aquarium Pet Trade