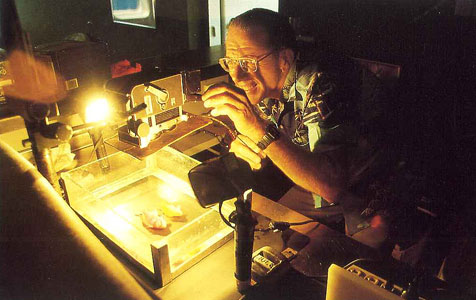 The science world is still counting the number of fish species he described—somewhere north of 830—but Dr. John E. “Jack” Randall will be remembered as one of the greatest ichthyologists of all time. He passed away peacefully Sunday, April 26th, at the age of 95 at home in Honolulu with his wife Helen, daughter Lori, and granddaughter Sandra. His family said that his death was from natural causes and was not attributable to Covid-19.

A long-time science advisor to CORAL, Jack had chosen the magazine’s editorial and art team to publish his long-awaited 800-page book of memoirs and adventures, due to appear in the fall of 2020 in partnership with the Bishop Museum, Honolulu. Dr. Richard L. Pyle, who has worked with Dr. Randall for a number of years organizing and editing the book says: “There will never be another Jack Randall.”

A full tribute and one of Jack’s last magazine articles will appear in the next issue of CORAL. 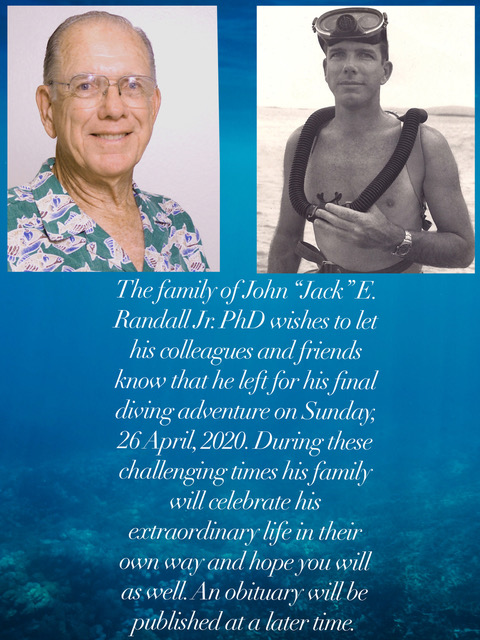 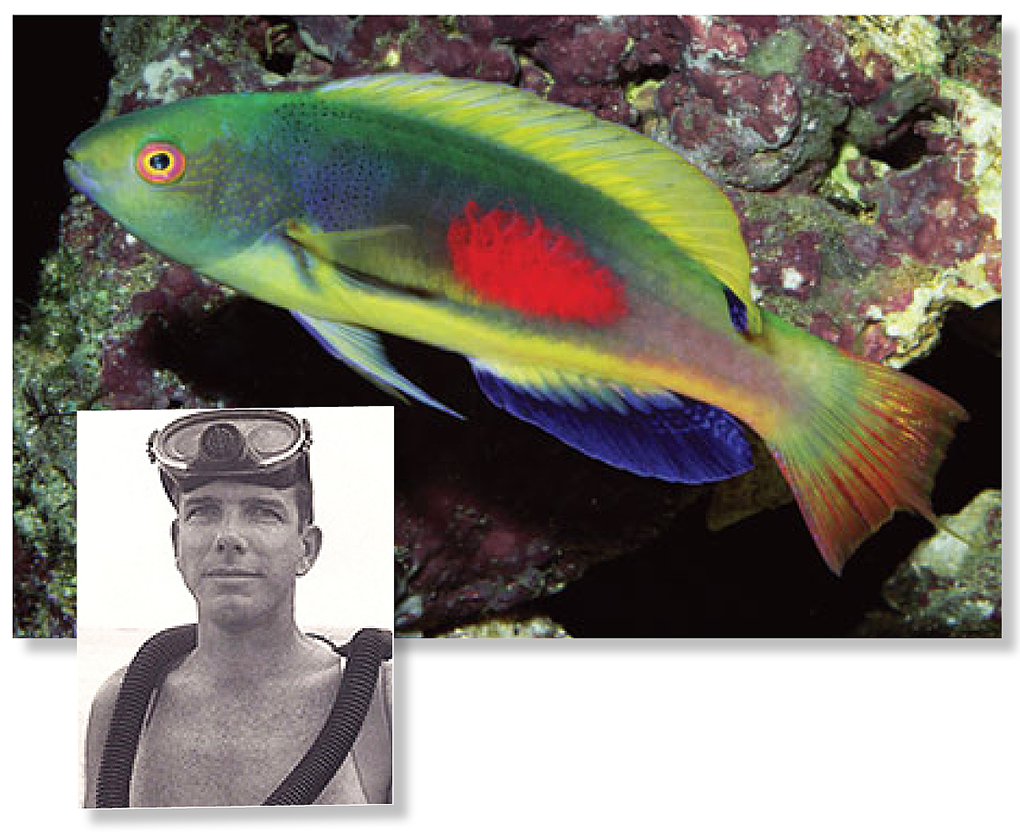 Dr. Randall’s accomplishments are numerous, and MASNA honored him in 2018 with a MASNA Pioneer Award at MACNA 2018. Learn more at https://masna.org/masna-programs/masna-pioneer-award/

My most vivid image of Jack Randall was seeing the tips of his flippers as I struggled to keep pace with him during dives we shared in the Persian Gulf in 1991. Fish everywhere in the world know Jack as one of their own. I know him as a man obsessed with discovering everything about everything, especially in the sea that was his natural home. It was my good fortune to know him and his beloved soulmate, Helen.

My bookshelf sags with the many volumes of fish books Jack produced during an astonishingly productive, positive, lifetime of giving to the world an enduring legacy of knowledge and inspiration. Aloha, Jack, as you journey into the great blue beyond.

NINE LIVES — PLUS
In his own words: Excerpt from Dr. Jack Randall’s forthcoming book, Fish & Ships

“I remember my friend Lewis Strauss remarking, after reading the first two parts of my memoirs, “You have already used up your nine lives.” True, and I have used up still more.

“Two were in Puerto Rico while driving a small Volkswagen when I averted a last-second crash with a much larger vehicle. Another in Puerto Rico when lightning hit the mast of our research vessel one second after I took my hand off the metal railing that is in metal contact with the shrouds supporting the mast. Once at high speed on a bicycle with failed hand brakes down a steep curving road in California. Once when diving in shallow water in the harbor at San Pedro, California with a scuba tank filled with oxygen (this was before I knew oxygen is lethal below about 30 feet). Once off California in my first sailboat en route  to Catalina Island, when I barely managed to lower sail before sea pouring in the bow from a missing hatch cover would have sunk the vessel. The crew and I would have died from hypothermia long before we could swim back to shore. 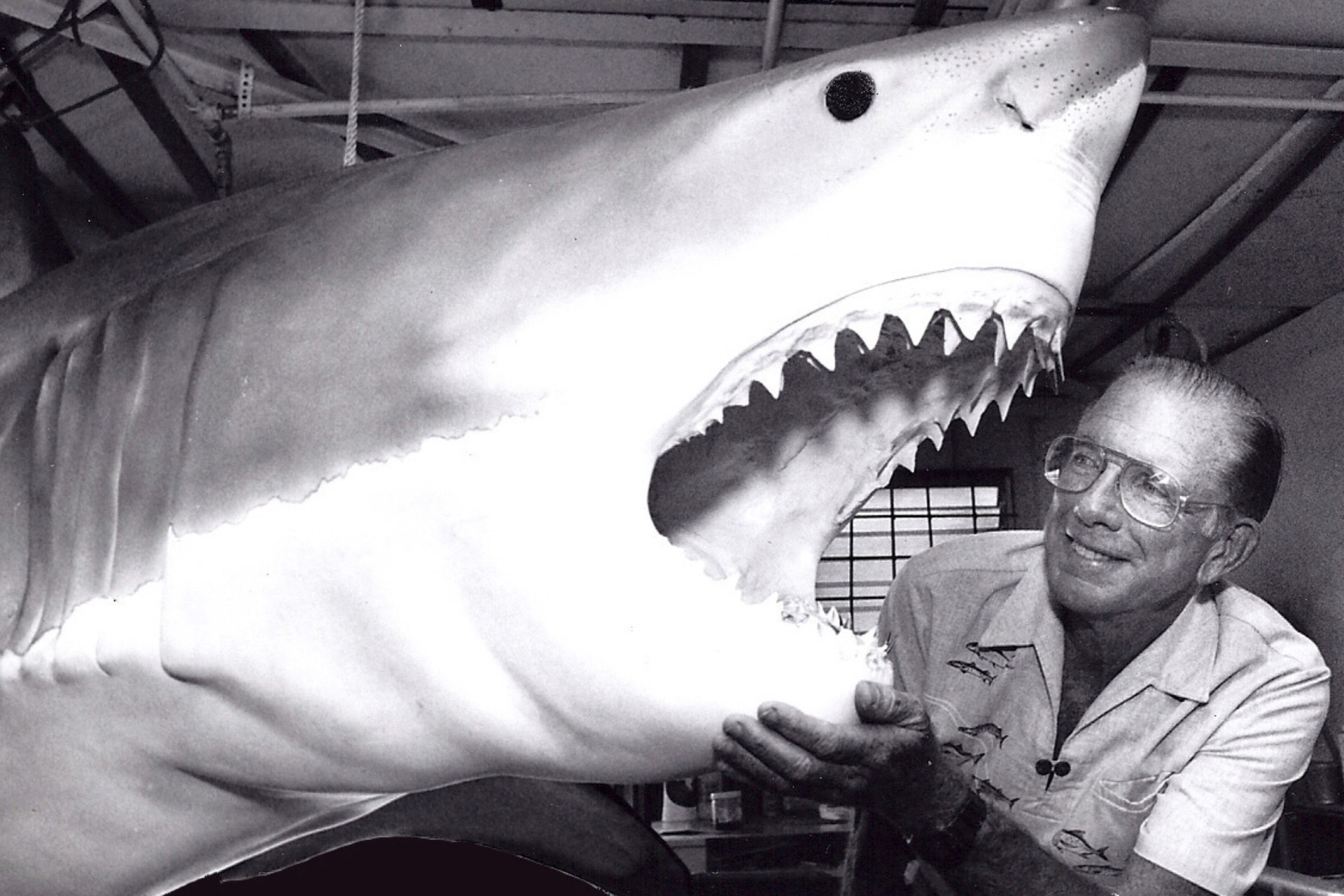 “Twice I had massive bleeding; once at age of about eight following tonsillectomy, and once following rectal surgery at age 70. Three times I was saved from death or a serious case of bends by getting air for decompression just in time (Virgin Islands, Palau, and Tonga). Four times I barely reached the surface after running out of air (St. John, Rurutu, Samoa, and O’ahu). Four times I was nearly trapped in an underwater cave (O’ahu, Puerto Rico, Philippines, and Solomon Islands). Once in Tikahau Atoll diving with an old double-hose regulator, I made it back to the boat from 120 feet just before being hit with prolonged vomiting (from an intestinal illness that had affected most of the crew of our vessel).

“Three times at Enewetak Atoll I narrowly missed being bitten by a shark (two by Tiger Shark, and one by Gray Reef Shark). Narrowly missed by a rock avalanche in Banda. One time while diving in 180 feet in the Bahamas with former student Walter Starck, I started to dive deeper; he grabbed me and pointed to go up. He had realized we had bad air before I did. Back in Nassau, we checked the source of air of the American from whom we had rented the tanks. The exhaust of his gasoline-powered air compressor was much too near the air intake. These close calls are discussed in greater detail in the present text of my memoirs, except the last that I had forgotten. They add to 23. Eighteen involve scuba diving, thus serving as a warning of the danger of this as sport or profession. Even more dangerous is diving with rebreather gear, as statistics have clearly shown.”