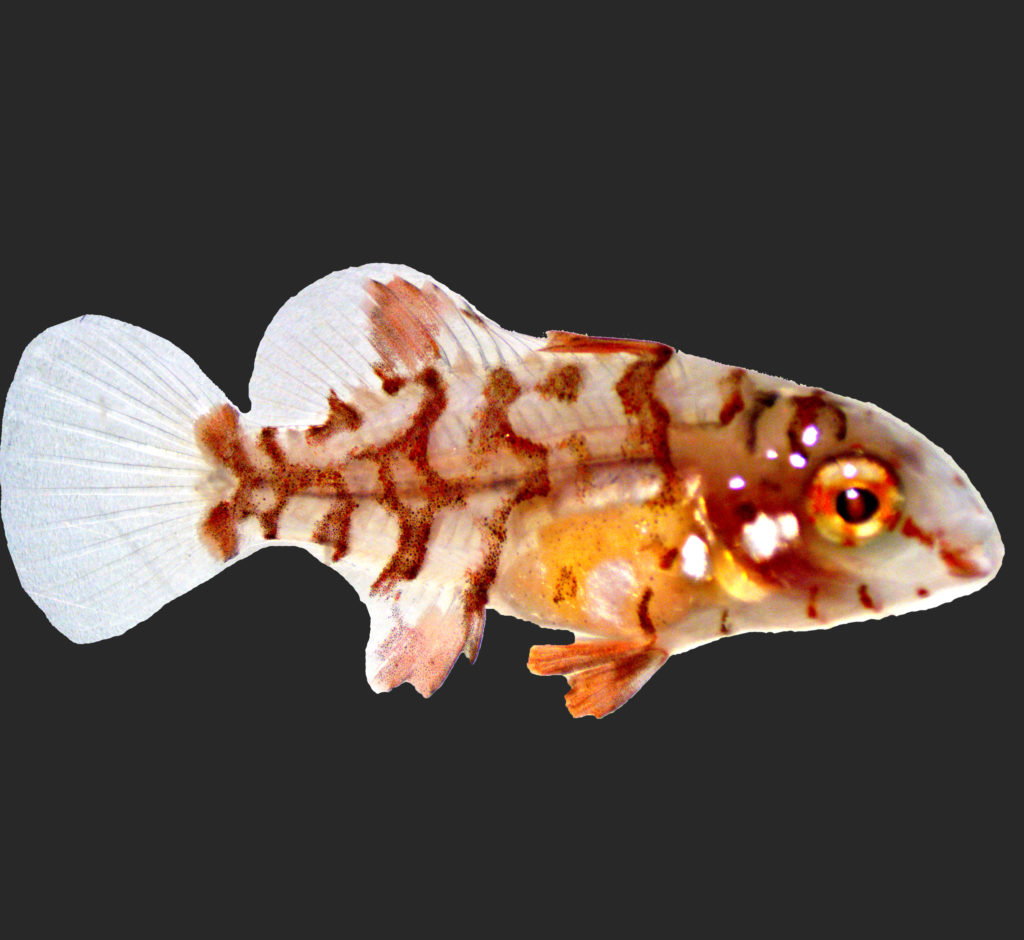 This species is considered a food fish, but is also displayed at public aquaria.

Harems were formed with 4-6 fish in 1500 gallon tanks. Groups were structured around one large assumed male (a fish displaying male physical characteristics, such as an elongated snout and large body size) and several smaller females. Males can be more than double the size of functional females within their harem, which in the wild could contain as many as 15 female fish.

Viable eggs float on the top of the water column. Eggs were collected daily every morning during a month and a half long spawning period. Spawning periods could potentially be much longer in captivity, but unforeseen circumstances led to the loss of the male in the actively spawning tank.

Eggs were clear with a defined yolk and oil droplet without much pigmentation. Eggs were roughly 1100 microns in size.

At hatch, larvae were already almost 3000 microns in length before developing any features like eyes or a mouth. Once the mouth was formed and opened, larvae were able to consume prey items in excess of 150 microns with ease.

Larvae were fed starting 2 days post-hatch. For the first 12 days, larval feeding consisted of rotifers and copepod nauplii, with artemia then integrated into the diet. Rotifers and nauplii were phased out over the next week. At day 16 post-hatch, dry Otohime feeds were incorporated into feeding, and by day 45 post-hatch larvae were fed predominately dry diets.

Settlement was difficult to define given the space these fish occupied within the water column. By 30DPH most larvae had fully metamorphosed into juveniles and aggregated to floating structures, but it took subsequent weeks for all larvae to aggregate to the bottom of the tank to non-floating structures.

Juvenile yields were over 10% from stocking in some tanks. We are confident yields could be greatly improved after identifying several unique bottlenecks that challenge this species at specific time frames of development. 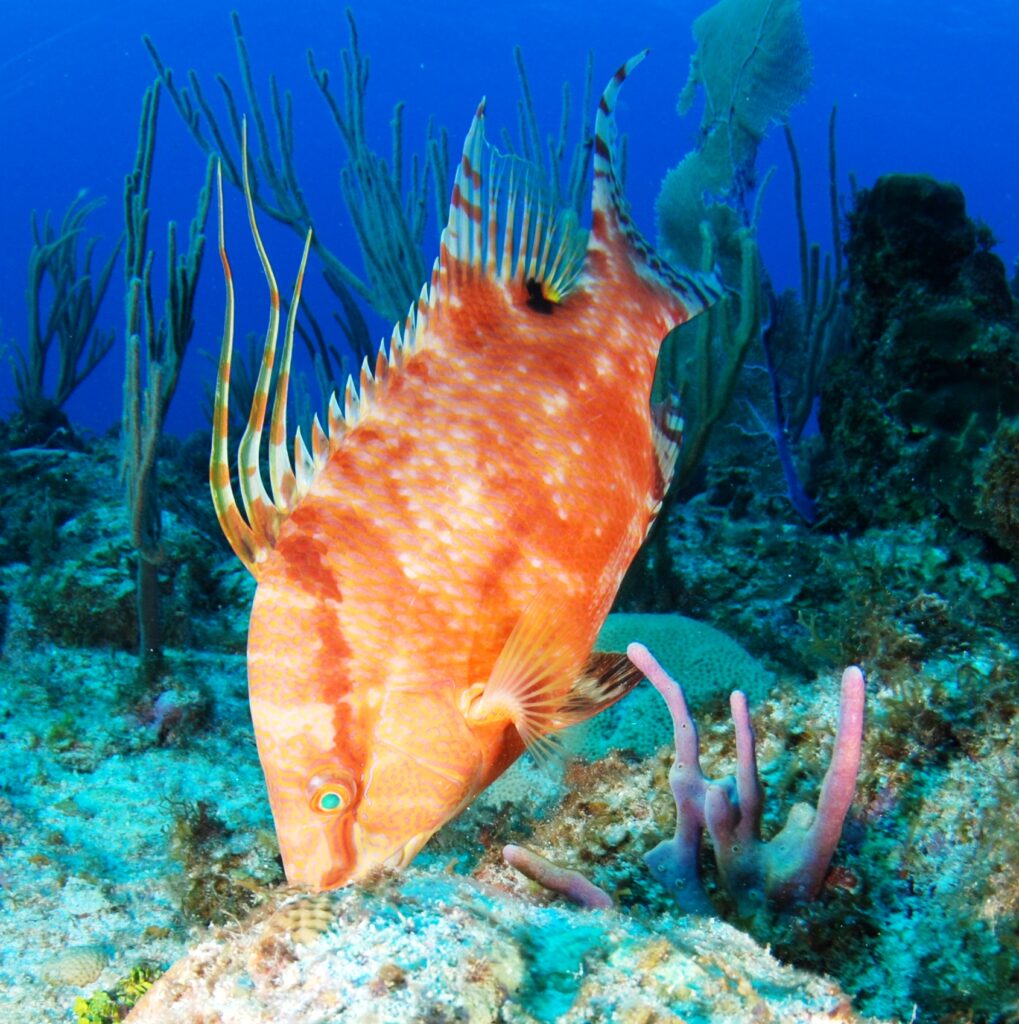 Application to Other Species

The pattern of harem formation and control we used would apply to many monandric mating systems, especially from the family Labridae (Wrasses) and Scaridae (Parrotfishes). Larger species of both families that would be seen more often in public aquaria would be likely candidates to perform in a similar pattern to Hogfish. 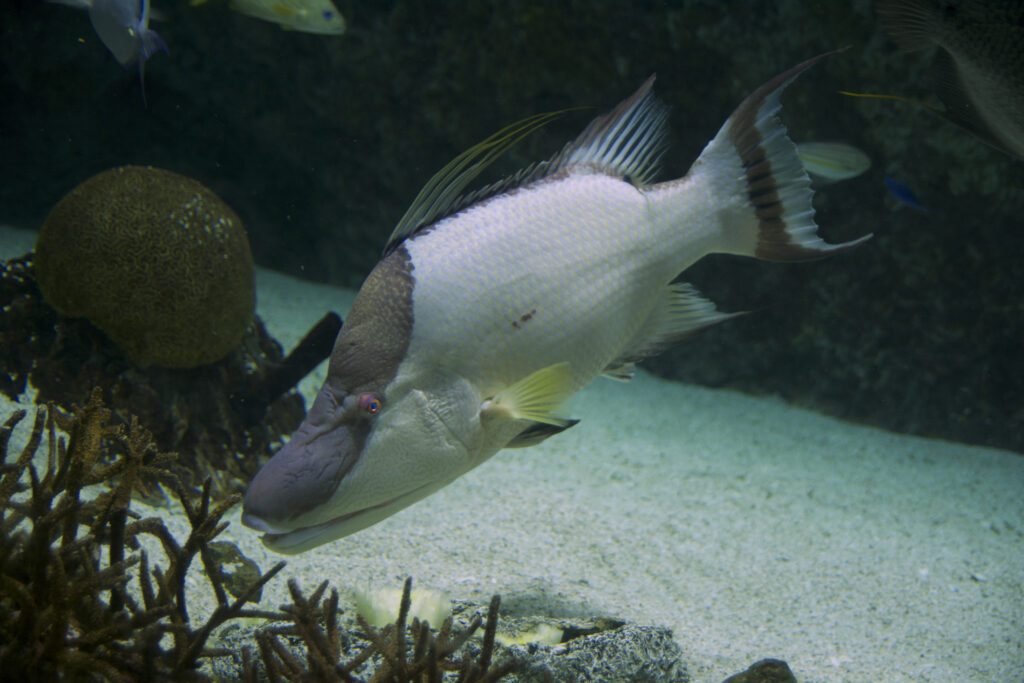 A large Rooster or Maximus Hogfish on display at the National Aquarium of Baltimore. This species commonly reaches sizes of 14″ (30 cm) but has been recorded as large as 36″ (91 cm) and 24 lbs (11 kg), which means this species is primarily relegated to sportfish utilization and public aquarium display. Image Credit: PlanespotterA320, CC BY-SA 4.0

Watch the juveniles at the lab, 84 days post-hatch as of mid-April:

Another aquaculture success on this Fishy Friday ✨ Dr. Oh's Lab at the UF/IFAS Indian River Research & Education Center successfully aquacultured the maximus hogfish, Lachnolaimus maximus! This was the first time this species was raised from captive broodstock eggs. Congratulations to the IRREC team!!Enjoy this video of the maximus hogfish, which are currently 84 days post hatch, and stay tuned for the blog about this achievement which will launch next week!

Editor’s Note – This groundbreaking work adds a welcomed bit of knowledge and understanding to what was once a rather limited view of the aquaculture for Lachnolaimus maximus. This species has been on “captive-bred” marine fish lists for years, a holdover from prior lists that were used in the foundation of our own reporting (e.g. https://www.reef2rainforest.com/2013/01/03/coral-magazines-captive-bred-marine-fish-species-list-for-2013/).

In the past, it is not always clear that a “captive-breeding” success from decades prior actually meets the modern definition we apply today. As such, the prior existence of this species on our list as a matter of long-standing history could be validly challenged. With today’s news, we now have a firm, undeniable, documented captive-breeding success which squarely affirms the species’ placement on our lists.

Our congratulations are once again extended to the research team at the UF/IFAS Indian River Research & Education Center.