Aquarists: Do Not Try Your Chloroquine Phosphate to Prevent COVID-19 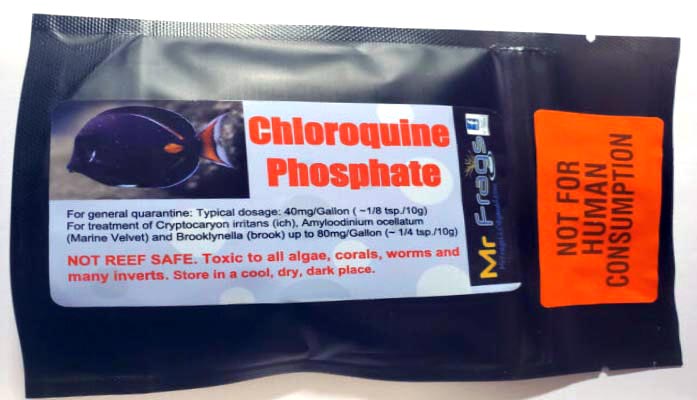 An example of chloroquine phosphate, sold by Mr Frags and clearly marked “Not For Human Consumption”, sold in a powder form to medicate marine fish suffering from various parasitic infections. As of 3/27/2020, search results suggest that 10 grams of the medication were retailing for $54.99 through this vendor, although it appears this and other mentions of the offering have been removed from the retailer’s website and social media pages.

We at the Pet Industry Joint Advisory Council are saddened to hear of the death of a man in Arizona after he ingested a substance labeled for use as a medication used to treat fish parasites that contained the ingredient chloroquine phosphate. On behalf of the entire responsible pet care community, we warn the public that they should never use pet care products, or any products, for any purpose other than what the label directs.

Some fish medications contain chloroquine phosphate or other forms of chloroquine, but the active ingredients are in a different form from those intended for human use and can be poisonous if ingested by people. These products may also have additional ingredients that support the intended use, but that can be harmful to humans. In this case, it is believed that the deceased mistakenly thought that chloroquine phosphate could prevent the COVID-19 virus. According to the World Health Organization (WHO) and the Centers for Disease Control and Prevention (CDC), there is no vaccine to prevent COVID-19 nor any evidence that current medicine can cure the disease.

The responsible pet care community is now, and always has been, committed to protecting the health and well-being of humans and companion animals. The WHO and CDC continue to affirm that there is no evidence that a dog, cat, or any pet can transmit COVID-19. We at PIJAC recommend that people follow the guidelines for preventing COVID-19 infections at cdc.gov/covid19, and for keeping safe around pets at cdc.gov/healthypets, including always washing your hands after handling or being around animals or their waste, food, or supplies.

Editor’s Note: Mainstream media coverage has repeatedly referred to chloroquine as a “fish tank cleaner“, a “drug found in fish tanks“, “fish food“, a “fish tank additive” and other such variations on the theme that vastly misrepresent the role of this compound in the aquarium hobby. With this ongoing news coverage promoting the possible benefits of chloroquine as a drug that may be useful for treating coronavirus/COVID-19, some aquarists found themselves recognizing the product as something they may have used in the past, or even had on hand.

Last week, mainstream news outlets (notably NBC) reported the troubling story of a Phoenix, Arizona couple in their 60s who ingested pet-grade chloroquine phosphate which the wife reported that they had used to treat their pet Koi. The husband died, and the wife was hospitalized.

When To Use Chloroquine

Chloroquine phosphate (actually chloroquine diphosphate) is definitely not a fish food, fish tank cleaner or additive. In fact, it is really only promoted as an anti-parasite medication applied within the marine side of the aquarium hobby. The parasites most often cited as susceptible to chloroquine include Saltwater Ich (Cryptocaryon irritans), Marine Velvet Disease (Amyloodinium ocellatum), Brooklynella hostilis, & Uronema marinum.

So how did chloroquine get so vastly mischaracterized as an “aquarium cleaner” or “additive”?

There is one possible explanation, although certainly not the only hypothesis.

We might have Wikipedia’s chloroquine content to blame. Buried within a large article on the family of related chloroquine compounds is this statement: “Chloroquine, in various chemical forms, is used to treat and control surface growth of anemones and algae…”

Following the citation to its source, we’re lead to an article by Jay Hemdal in Advanced Aquarist, published around 2012 or 2013 (“7 years ago”). Taken out of context and oversimplifying a large article into a single sentence about the animal applications for chloroquine, it’s easy to understand how a Wikipedia contributor got it wrong.

In the opening lines of the article, Hemdal notes, “Marex was sort of a wonder drug for us back then – simply adding a single $1.99 dose protected the fish in a 50-gallon aquarium from many diseases plus it killed the unsightly algae that grew all over the tank decorations …I did some research and discovered that the active ingredient in Marex was chloroquine…”

Hemdal continued later in the article, noting, “A single dose of chloroquine at 15 mg/l was found to be effective at eradicating Aiptasia sp. glass anemones within 48 hours. In one test, no reinfestation of these pest anemones was seen in two months following treatment (personal observation). However, this method cannot be used in aquariums housing other invertebrates as this dose also eradicated algae and sponges that were growing alongside the Aiptasia sp. anemones.”

Considering the proportion of invertebrate dominated reef aquariums in the marine hobby, we’d hardly think of chloroquine as an aquarium cleaner or practical algicide, at least not any more appropriate than using something like copper to combat Majano anemones while hoping it eradicates a cyanobacteria outbreak.

At some point, Hemdal’s notes on the effective but impractical capability of chloroquine to function as an algaecide made their way into Wikipedia, framed in a manner that is inconsistent with what experts like Hemdal actually recommend. It dubious that any aquarists or companies are actively promoting a useful anti-parasitic medication simply for its ability to kill algae; to do so would be unwise, uneconomical, and raise the chance of causing resistant strains of parasites along the way.

When Not To Use Chloroquine

We’ve been hard-pressed to find any information suggesting its use on the freshwater side of the aquarium hobby and as such, we’re not immediately able to comment on its application in koi ponds and why a freshwater aquarist would keep the chemical on hand, as both uses are certainly “off-book” from what aquarium literature recommends.

We would not recommend chloroquine as an aquarium cleaner, nor as a freshwater medication (without significantly more information that is currently lacking), nevermind trying to self medicate with your aquarium medicine chest’s chloroquine in an effort to treat or prevent a COVID-19/coronavirus infection.

For more on the proper application of Chloroquine in the aquarium hobby: