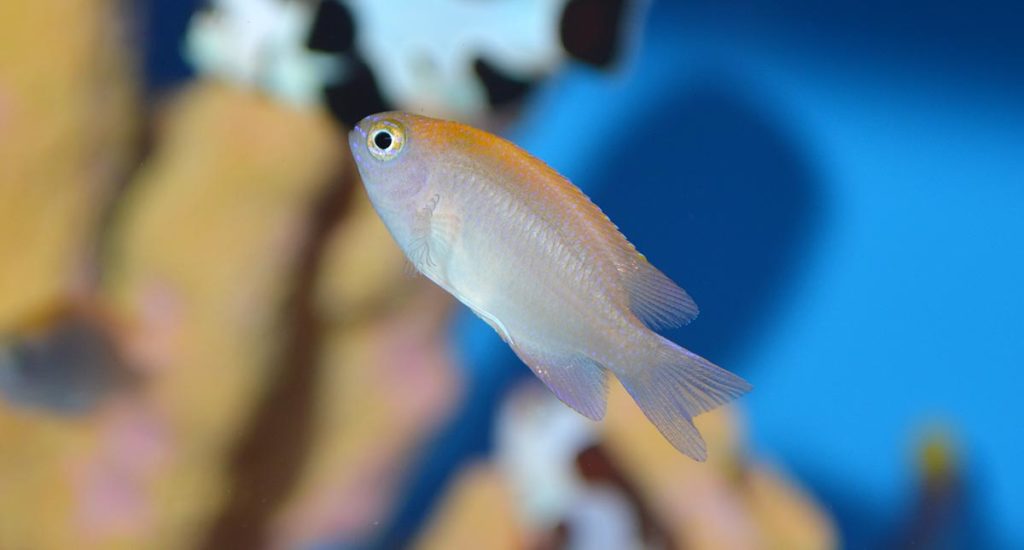 The Pink Smith is a welcome addition to the marketplace of captive-bred damselfishes.

Damselfish are truly a staple of the marine aquarium hobby. They often wind up as a somewhat underappreciated “beginner’s fish,” relegated to being the first piscine additions to a new aquarium. They may carry reputations for aggression, which are often well-deserved. Still, there are many worthwhile damselfishes that aren’t terrors in a saltwater aquarium. It is these species which Florida-based Oceans, Reefs & Aquariums (ORA) aims to produce in their never-ending quest for a 100-percent captive-propagated reef tank. 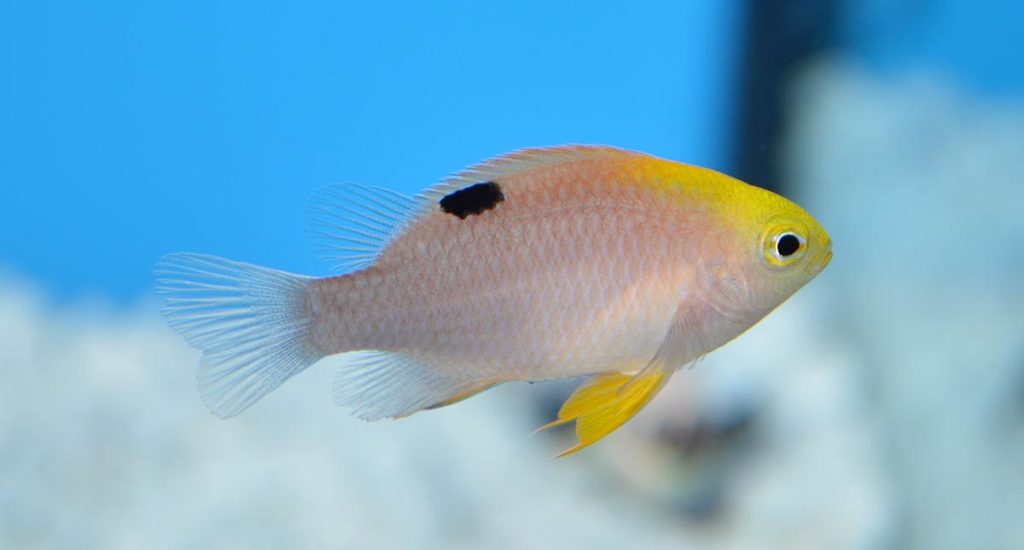 ORA’s captive-bred Talbot’s Damselfish, Chrysiptera talboti, are one of several species that have been produced routinely by the hatchery. ORA’s newest introduction is similar at first glance.

ORA’s 2020 Global Pet Expo display featured many noteworthy additions to their offerings of captive-bred fish, which we’ll cover in several installments. On the damselfish front, ORA displayed well-established offerings of the Azure Damselfish (Chrysiptera hemicyanea) and Talbot’s Damselfish (Chrysiptera talboti). On the larger end, the ORA Lemon Damsels (Pomacentrus moluccensis) were a couple of inches in size and vividly colored. Anyone who has bred solid yellow fishes understands the challenge of getting their coloration “just right” without turning muddy, orange, or dusky; these damsels were striking. 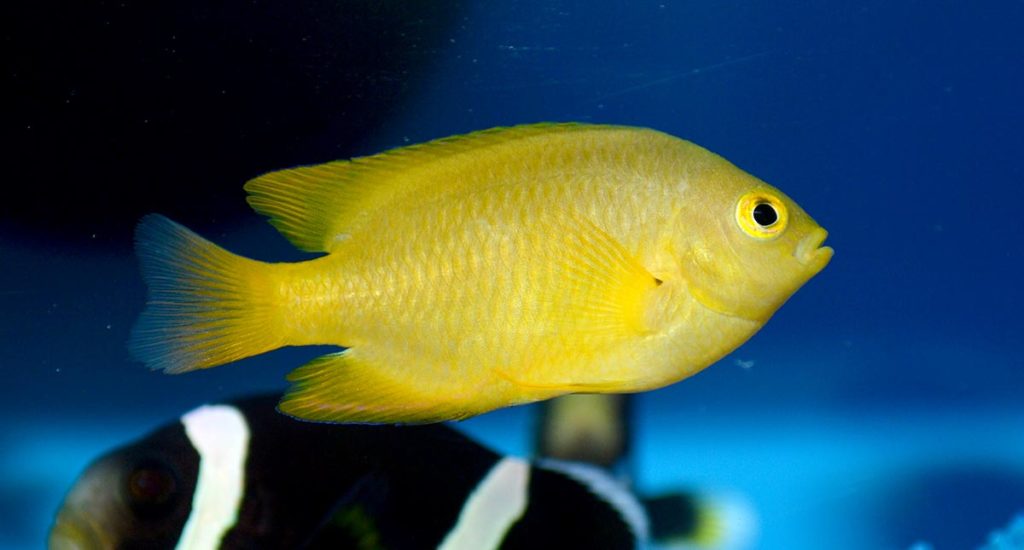 But if you spent a little time talking to the ORA staff, you would discover that there was something new, somewhat hidden among the many captive-bred damsels on display. It only took a minute for Adam Heinrich, ORA Production Manager, to pull me aside and proudly show me the newest species to enter cultivation at ORA, the Pink Smith or Smith’s Damselfish, Pomacentrus smithi. Because it was mixed into the display with the similar-looking Talbot’s Damsels, one could have easily overlooked these lavender-colored beauties, which are truly comparable in appearance except for the notably lacking dorsal ocelli. It’s worth noting that per the ongoing tally of captive-bred marine fishes, this release represents a captive-breeding first for the species. 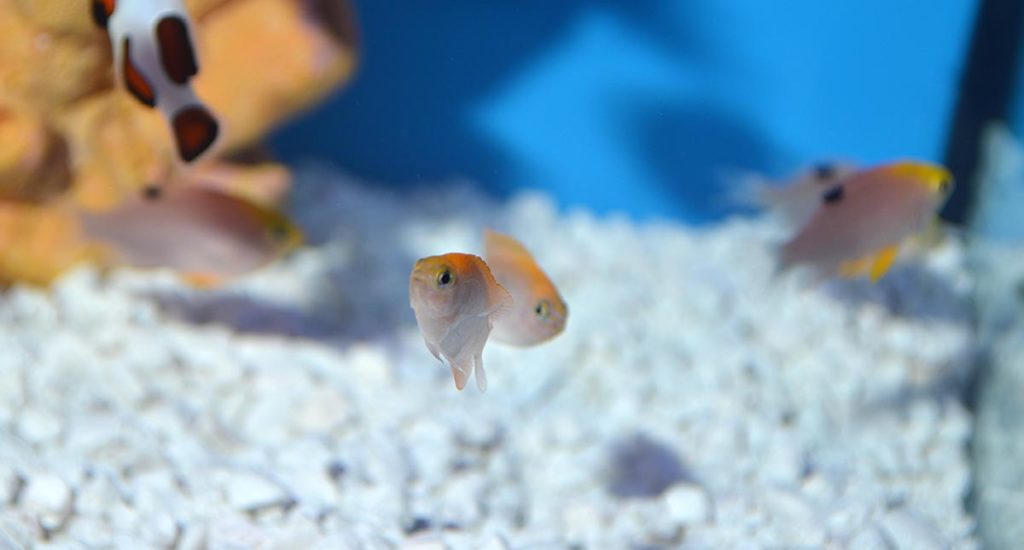 Front and center, ORA’s latest damselfish debut, but in the background, the similar-looking Talbot’s Damselfish is readily identified by its prominent black dorsal ocellus.

Says an excited Heinrich, “We do have them producing at a commercial level, 500 to settlement per month per pair. They grow twice as fast as Chrysiptera.” 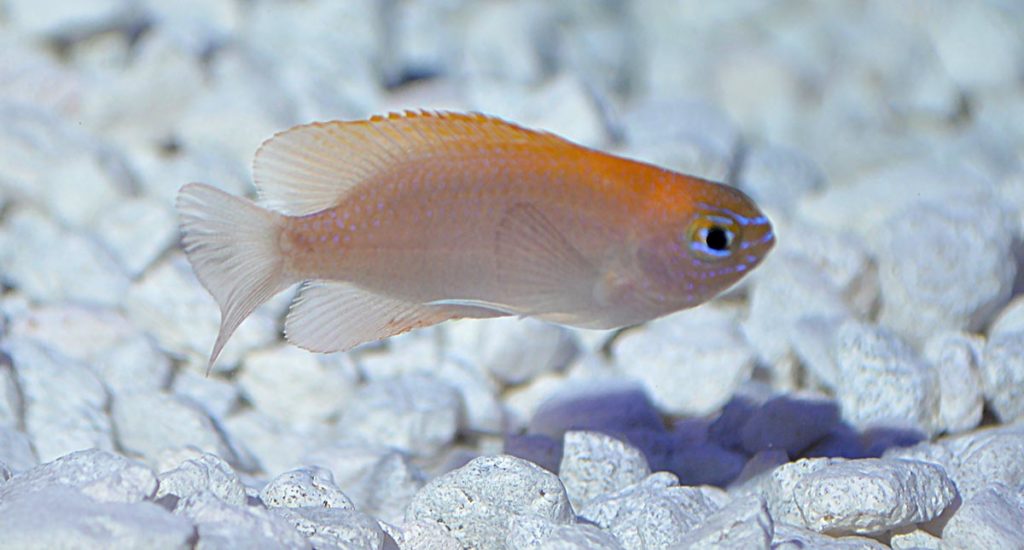 With a pink-to-lavender body, goldenrod back, and blue facial markings, the Pink Smith or Smith’s Damselfish has a pleasing appearance that would stand out in a group display.

With such positive results, one can presume that Pink Smiths will become one of the more readily available captive-bred damselfishes in the near future.

Over time, the Pink Smith Damselfish may slightly fade in coloration, but with a maximum size under 3″ and a pleasing, mildly aggressive disposition, this species certainly deserves consideration if you are in the market for a damsel (or group of damsels). 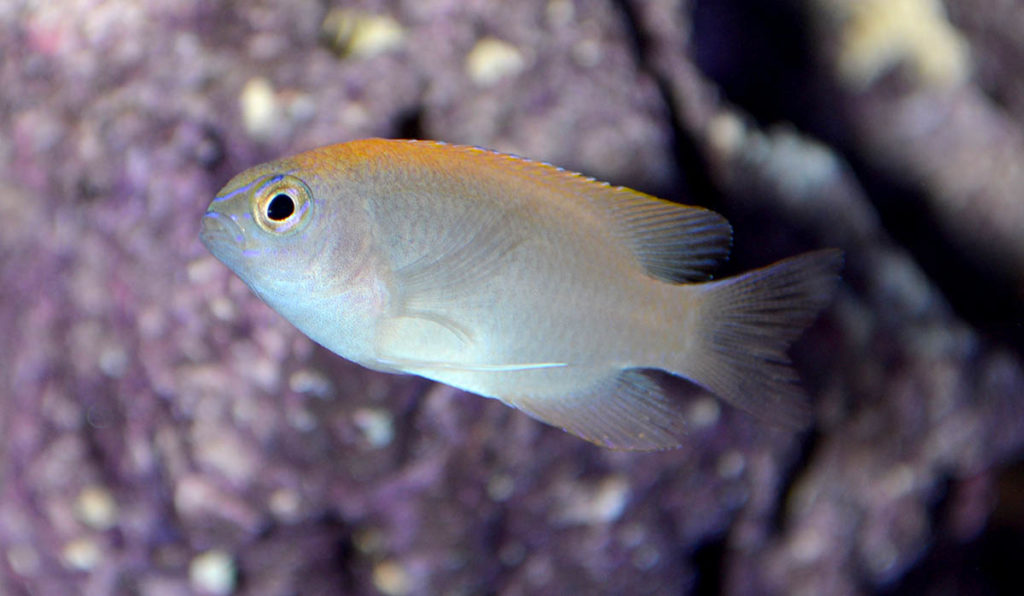 One last look at the newly-bred Pink Smith Damselfish which ORA debuted at the 2020 Global Pet Expo.