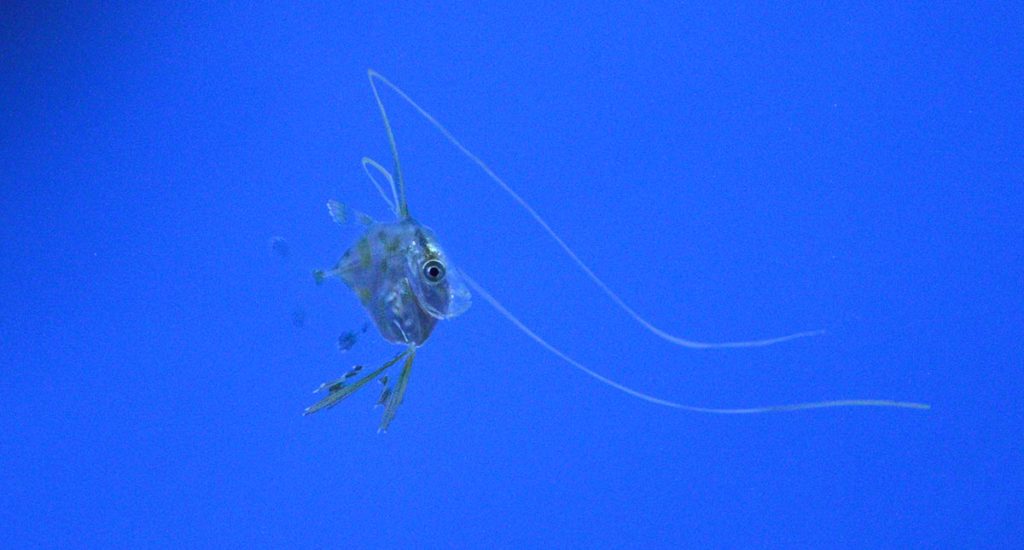 With a body smaller than a dime, these baby captive-bred Lookdowns may have been one of the most captivating marine fishes on display at the 2020 Global Pet Expo in Orlando, FL.

There were so many fish on display at the 2020 Global Pet Expo that we cannot possibly cover them all, but Florida’s aquaculture producers, both freshwater and marine, put on truly stellar displays that would captivate even the most experienced (or jaded) fish geek. This is just the first installment in several updates in the days and weeks ahead from one of the largest pet industry trade shows on the planet, which was held at the Orange County Convention Center in Orlando, FL, on February 26–28th, 2020.

To kick off our Global Pet Expo coverage, I’d like to highlight a captivating example of what Florida’s fish farmers are producing for the marine aquarium market: the amazingly beautiful and tiny captive-bred Lookdowns (Selene vomer) that were on display from Proaquatix, a marine ornamental fish aquaculture facility in Vero Beach, FL. 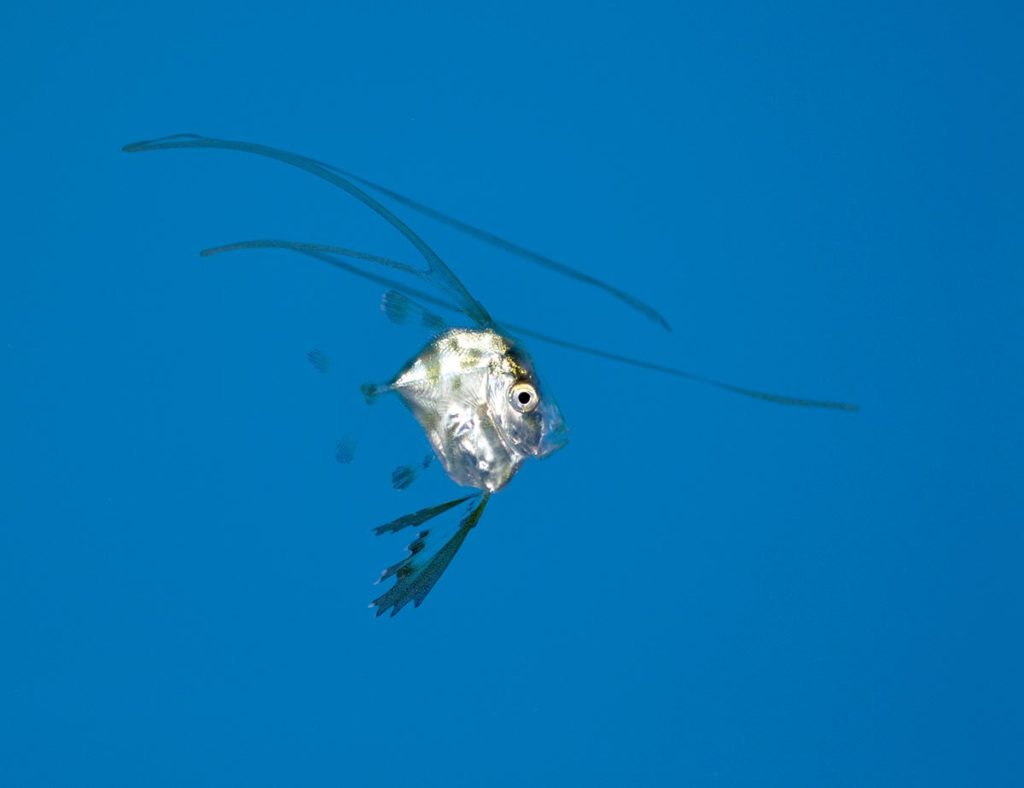 As they’re always on the move, a high shutter speed and external flash are as close as one can get to freezing the movement of this baby Lookdown.

The captive-bred Lookdown isn’t new (we first covered the story in 2011). It is perhaps best described as a flagship offering from Proaquatix; no other commercial breeder of marine ornamental fishes currently produces the species for the aquarium trade. The species itself isn’t a “reef fish,” at least not in the sense of what many aquarium hobbyists with average-size aquariums are pursuing these days. These large predators mainly find their homes in larger fish-only displays and public aquaria. They make for impressive displays when housed in large shoals.

A wide-ranging eastern Atlantic species found from Maine south to Uraguay, Lookdowns aren’t for everyone. Capable of reaching well over 13″ in length (or is it diameter), Selene vomer are active, predatory fish that require several hundred gallons of tank space at maturity. 200-gallons is often cited as a minimum, but in truth, a group of these fish would appreciate something even larger.

Even with routine, annual production (the adults breed seasonally), Proaquatix’s Lookdowns can take a bit of tracking down if you’re looking to buy them, and are not inexpensive. This is a rare case where the difficulty of capturing and shipping the wild fish makes them rather costly and infrequently offered; captive-bred specimens are more affordable and robust and certainly worth seeking out. 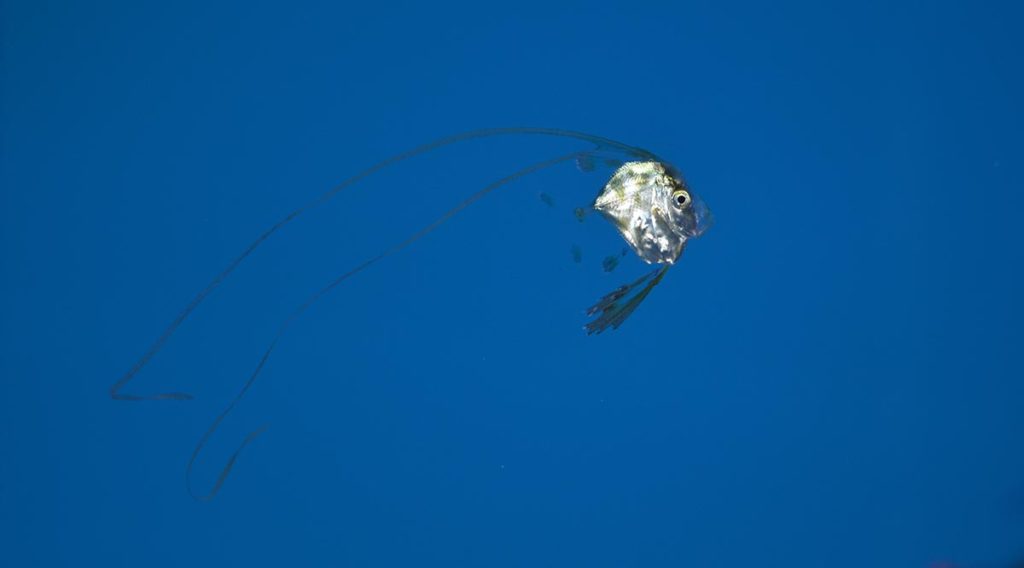 Even at this baby stage, the Lookdown is already a highly laterally-compressed silver disc.

The fish displayed by Proaquatix this year were nothing short of hypnotic, otherworldly even. With a body smaller than a dime, they were dwarfed by their magnificent, highly elongated dorsal fin rays, which were several inches long. The reasons for these massively over-elongated fins are not well understood, but they present a true challenge during the larval development phase, where tangling of these extensions may well be a death sentence for these baby marine fish.

The dorsal extensions of this baby fish won’t last, but at this point in the fish’s development they are several inches in length.

While the mature adult fishes are extremely laterally compressed, lightning-fast silver discs, these young Lookdowns energetically navigated the display with an air of grace, their fin extensions echoing each movement in a fashion rivaling the most accomplished Olympic rhythmic gymnast. 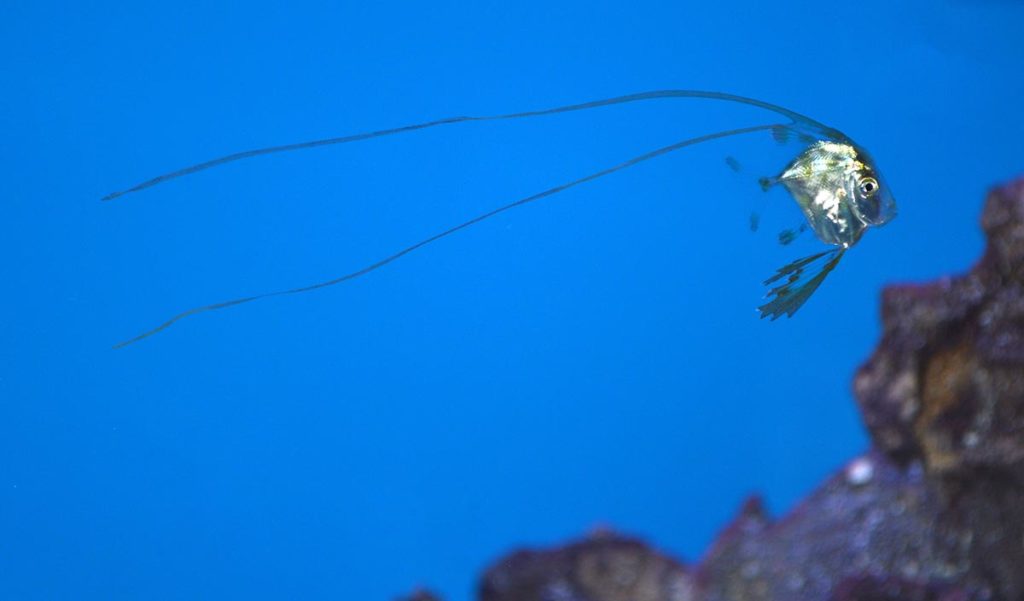 A glimpse of this baby captive-bred Lookdown with rockwork in the background, giving a slight sense of scale.

From a photography standpoint, these fishes proved challenging. Their mirror-like finish easily captured and reflected any flash, but their speed and activity level (they’re always on the move) made capturing them without augmented lighting difficult! 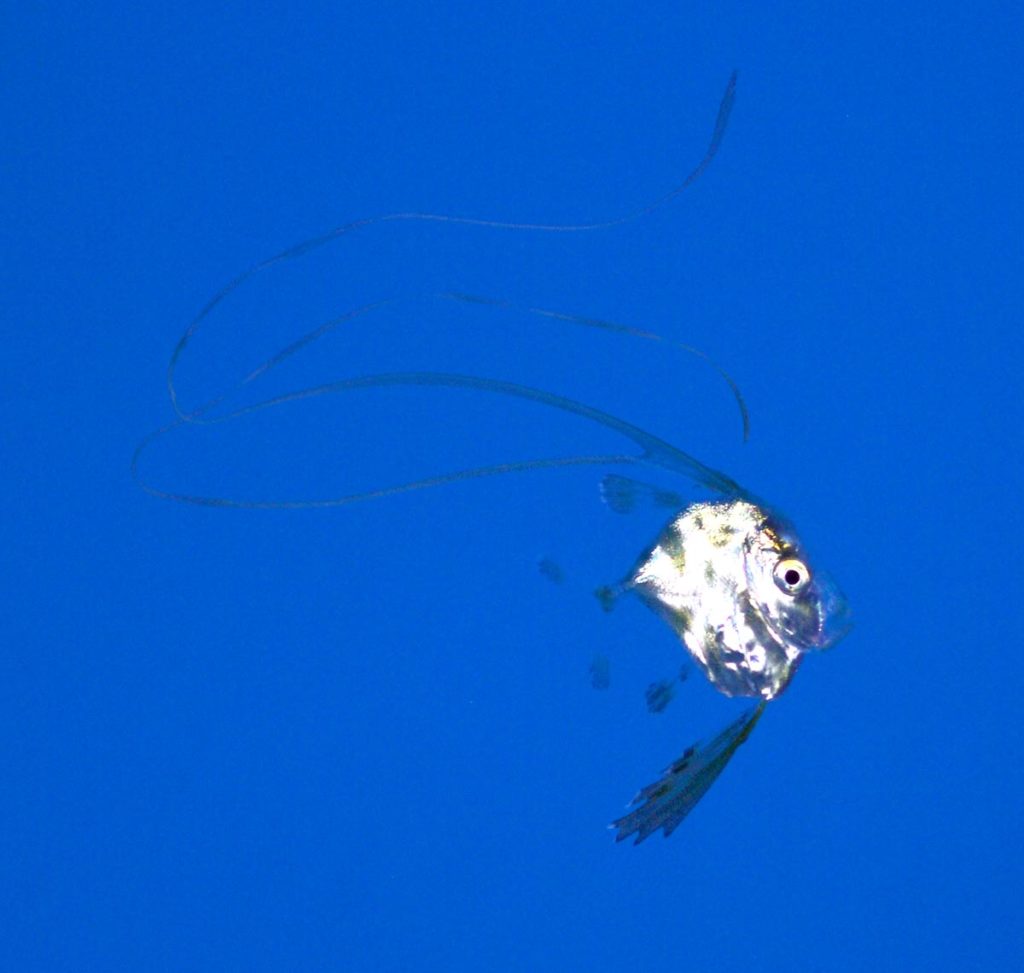 Get the angle just wrong, and all the light of a flash is reflected straight back into the camera. 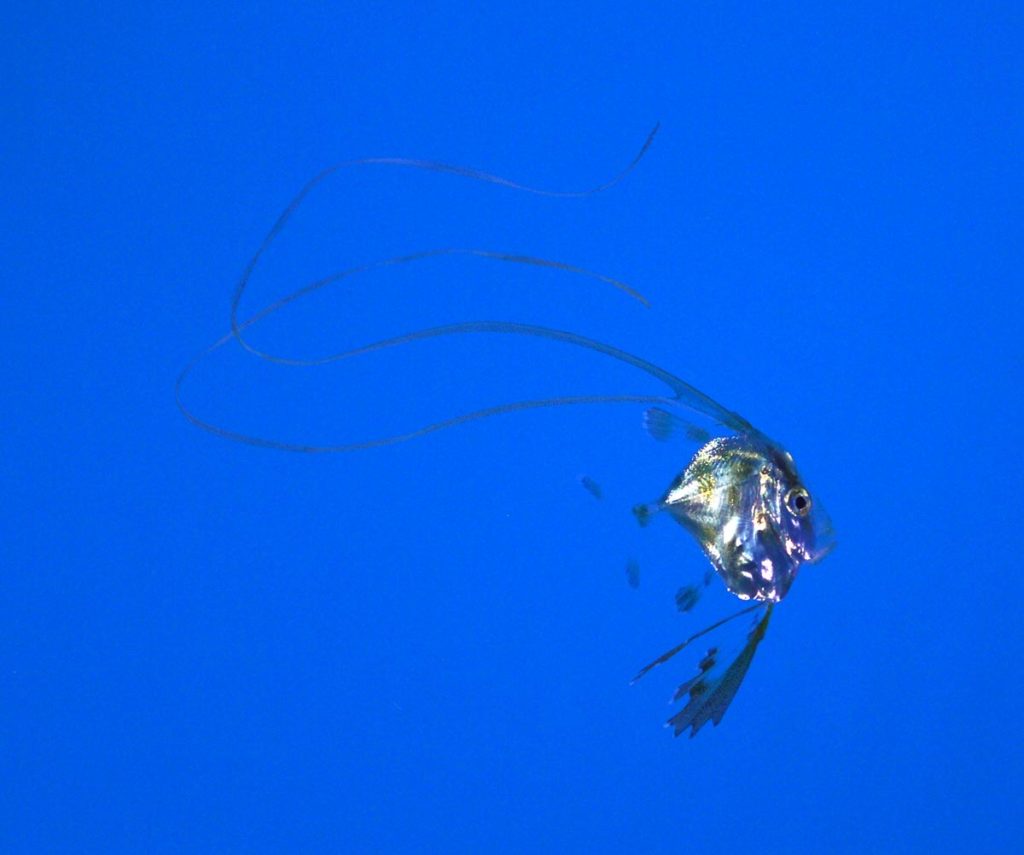 A split second later, a slightly different angle, and a very different image is captured. 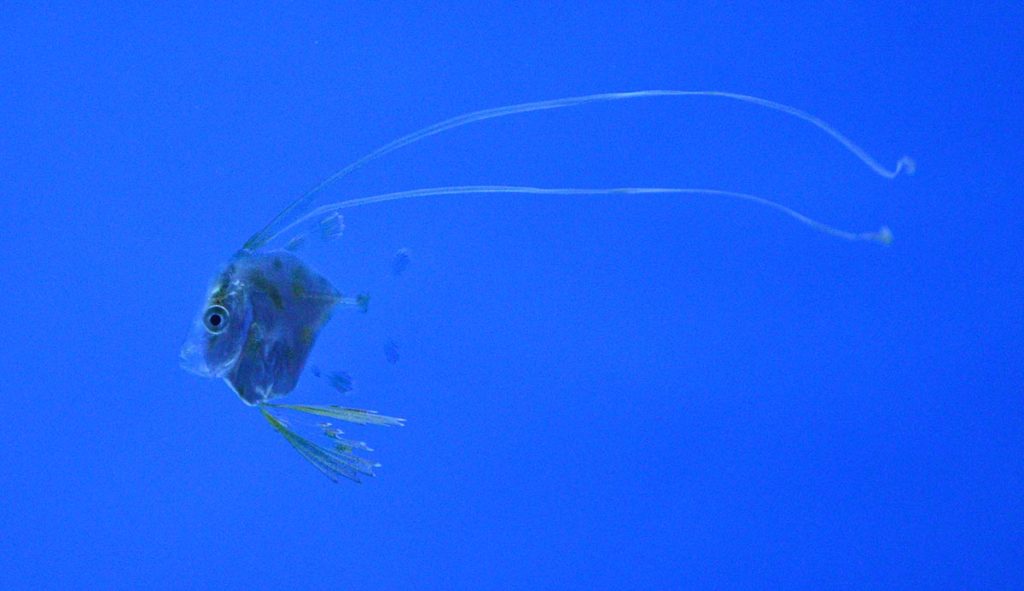 My personal preference is for the photos shot with only ambient light. 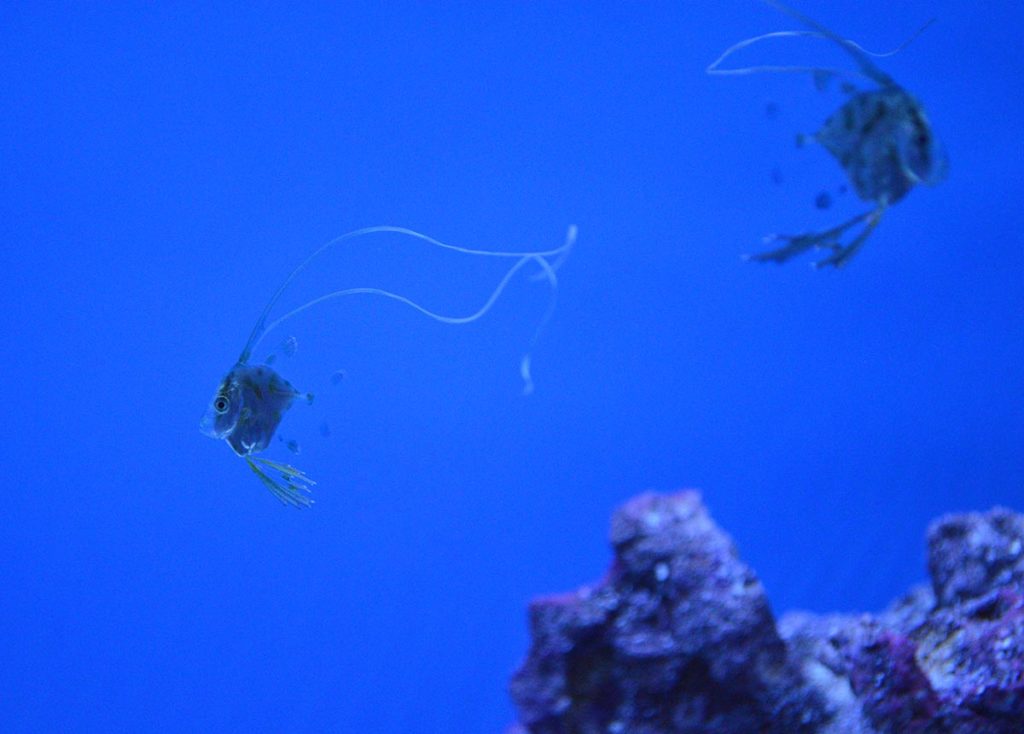 While they are grainier, the ambient-light images are perhaps a little more true to life. 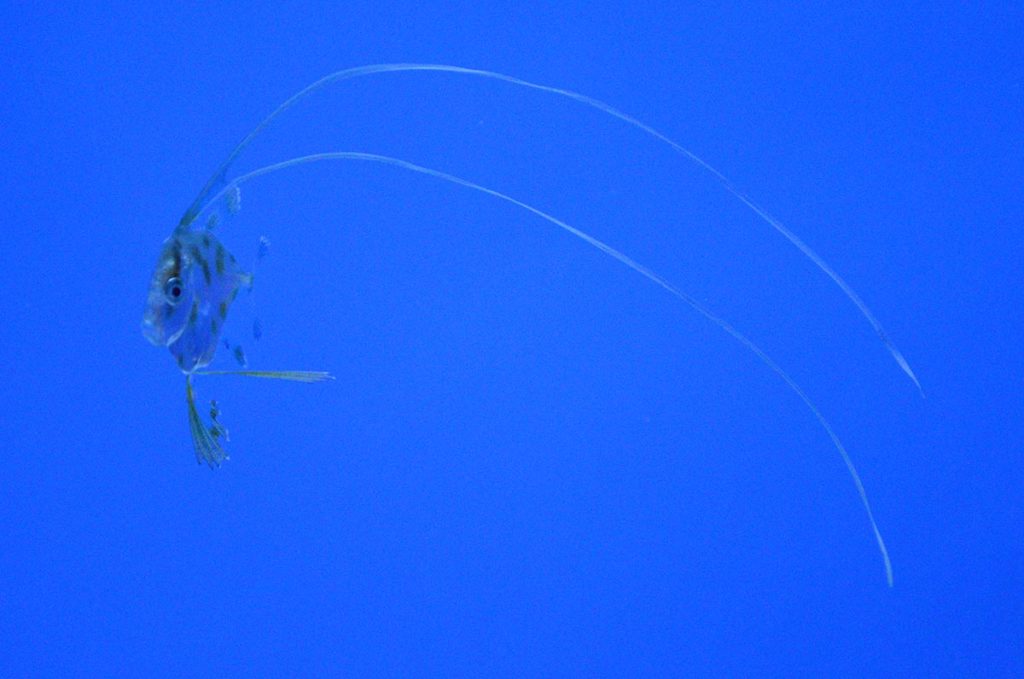 Check out those amazing dorsal extensions! 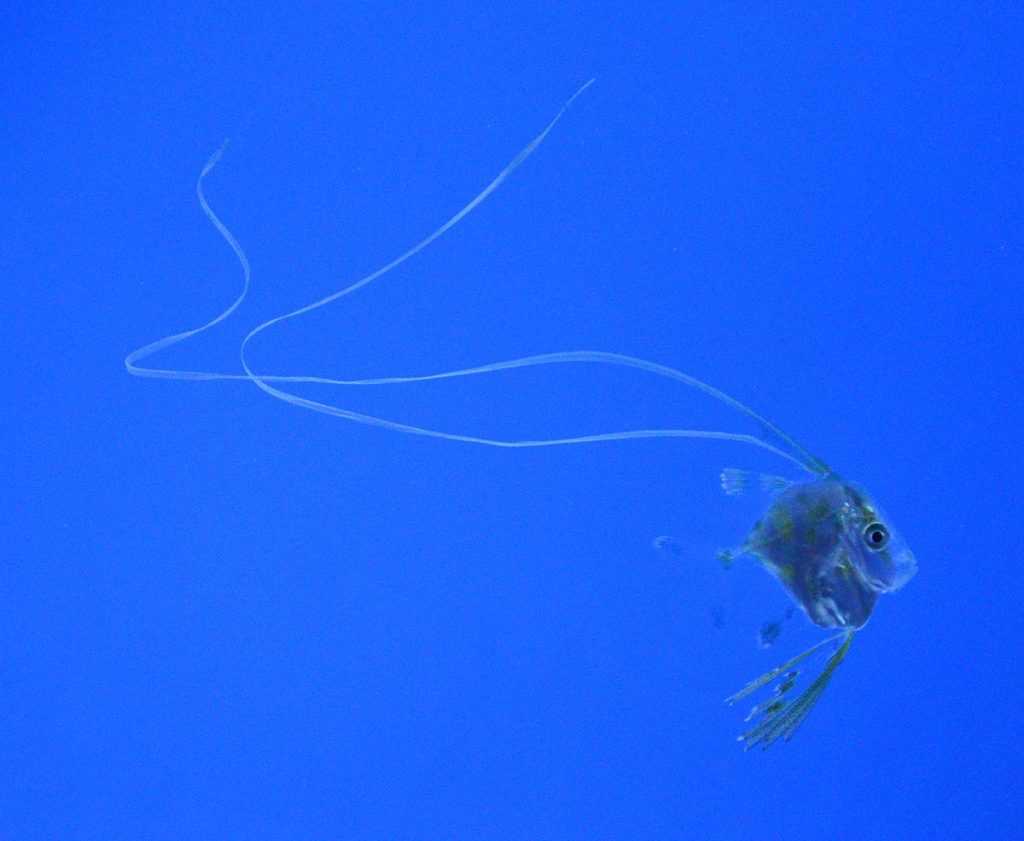 Every turn of the fish was mirrored by the long dorsal rays. 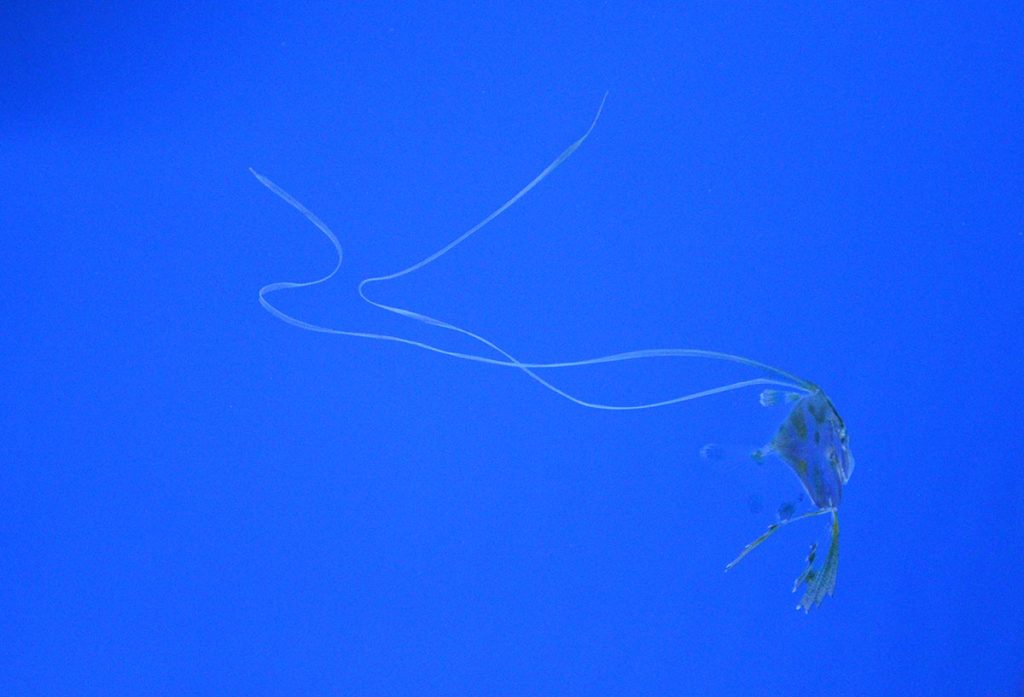 Every movement of the fish was replicated by the dorsal extensions. 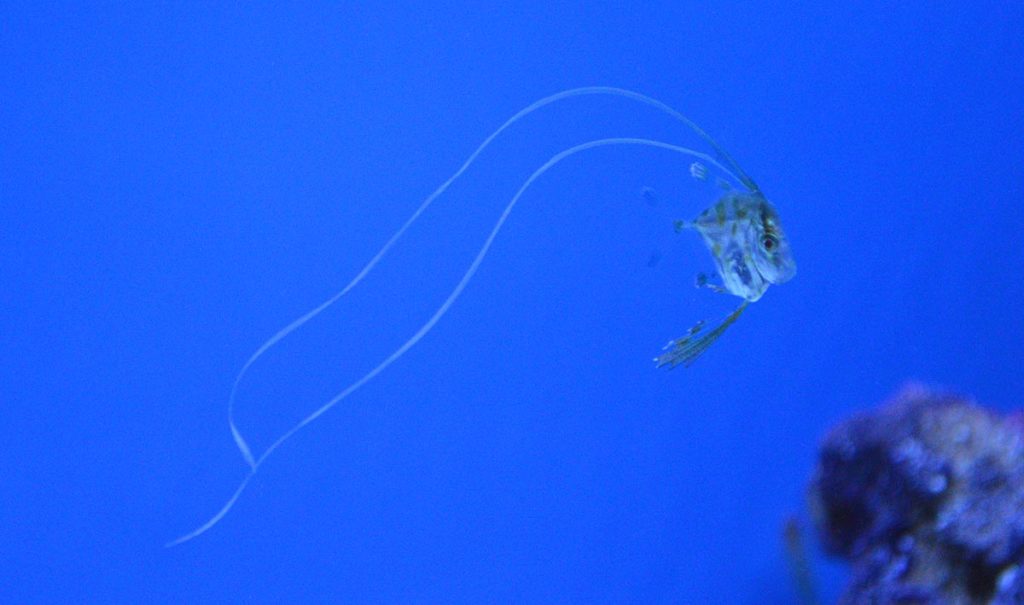 The experience was an ever-changing, ever-evolving show, as unique as a fireworks display. 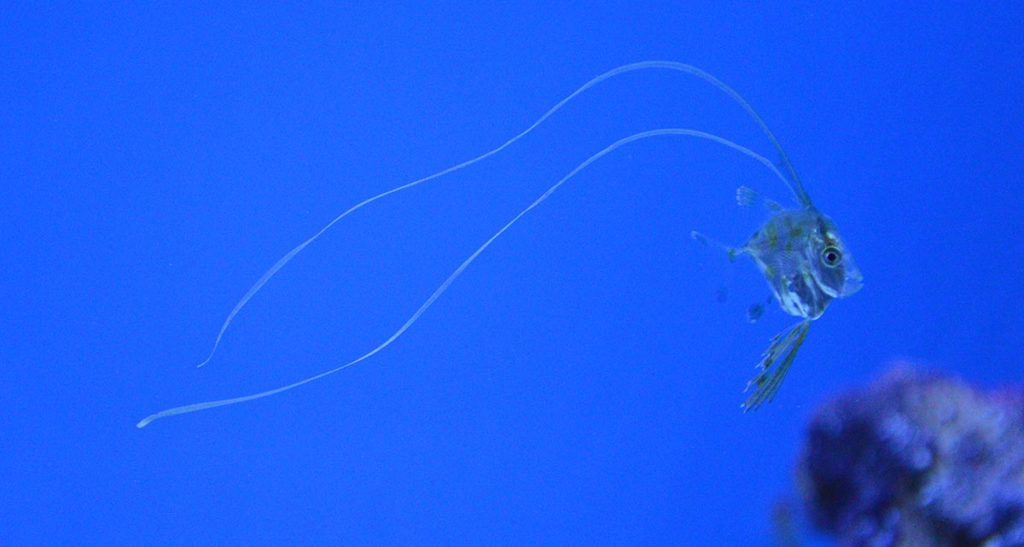 No two images were ever alike!

Proaquatix’s Eric Wagner informed us that their next crop of Lookdowns is due for release in April, 2020. Given proper care and space, over time these fishes will transform into equally unusual, captivating adults. 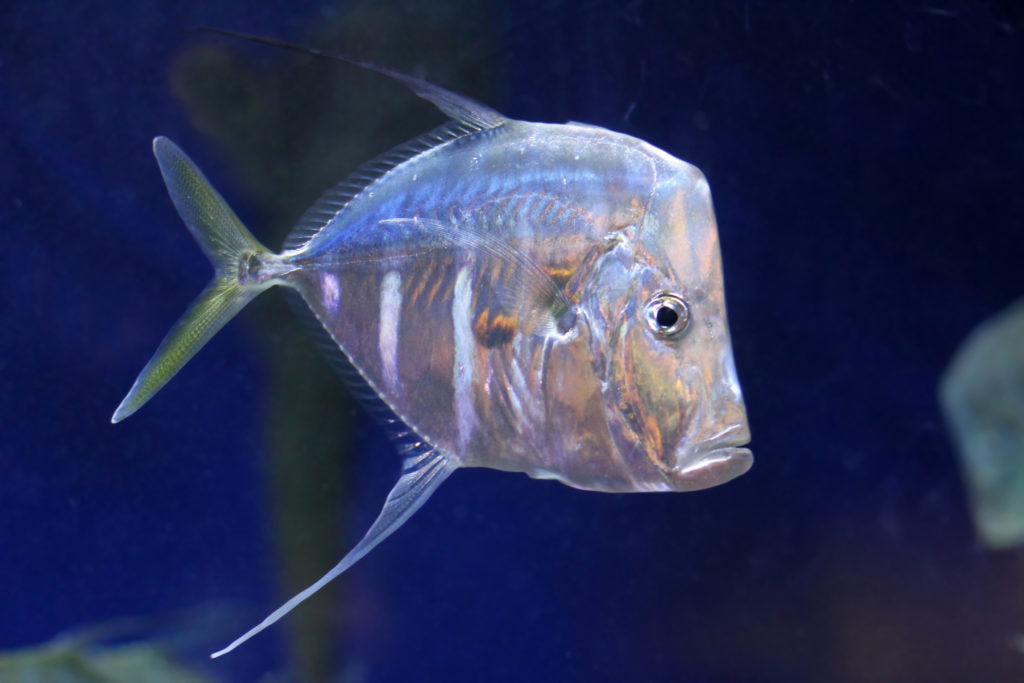 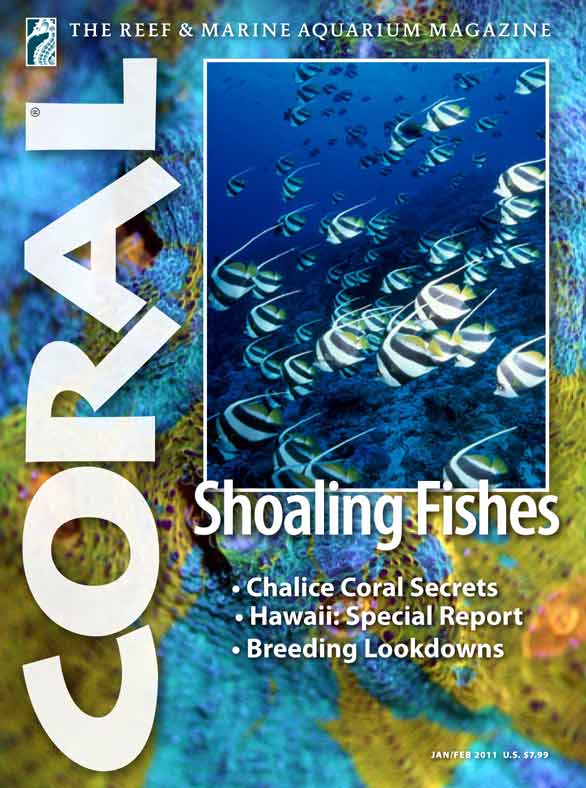 To learn more about the long-standing production of captive-bred Lookdowns by Proaquatix, check out the article “Captive-Bred Lookdowns,” by Matthew Pedersen, which first appeared in the January/February 2011 issue of CORAL Magazine, Shoaling Fishes.