via the Australian Institute of Marine Science (AIMS)

Marine scientists are using portable ship-borne aquaria in the search for heat-resistant corals that could survive warming ocean temperatures caused by climate change. The specially designed experimental aquarium is operating from the Australian Institute of Science’s largest research vessel, the RV Solander, on expeditions to Western Australia’s remote Rowley Shoals and the Great Barrier Reef.

“We can now conduct high-tech experiments from the back deck of our ship while surrounded by corals on the reef,” Dr. Thomas, a researcher working with AIMS and the University of Western Australia’s Oceans Institute, said.

AIMS climate change scientist Dr. Line Bay is using the technology on the Great Barrier Reef, and he said the idea was to use a standard test to get a snapshot of corals’ bleaching tolerance. 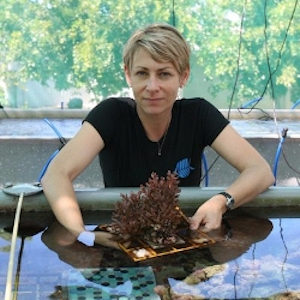 “These on-board aquaria will allow us to test corals across vast geographical scales and collect samples from corals that we know have been impacted by bleaching events, or are in naturally warmer waters and thus more heat-tolerant corals,” Dr. Bay said.

“We are testing the theory that corals naturally exposed to higher and more variable temperatures on the reef use their genes to cope with extreme water temperatures during times of coral bleaching,” Dr. Gilmour said.

The SeaSim-in-a-Box is testing the capacity of different corals to withstand higher temperatures while in the field. Image credit: AIMS

“This SeaSim-in-a-Box technology can be taken to reefs around Australia to test different corals’ capacity to withstand future climate conditions to deliver cutting-edge information needed to support conventional and new management actions into the future,” Dr. Gilmour said.

Watch video footage from the experiments, courtesy of AIMS: