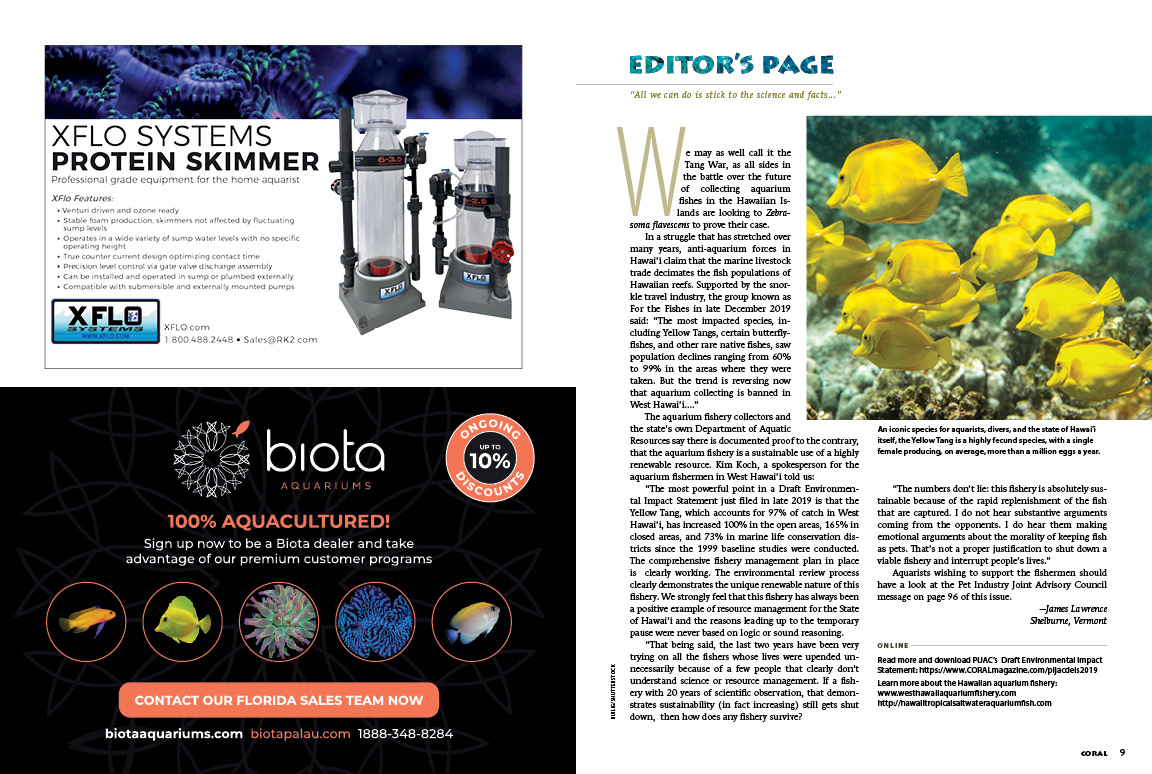 An excerpt from the January/February 2020 issue of CORAL Magazine

“All we can do is stick to the science and facts…”

We may as well call it the Tang War, as all sides in the battle over the future of collecting aquarium fishes in the Hawaiian Islands are looking to Zebrasoma flavescens to prove their case.

In a struggle that has stretched over many years, anti-aquarium forces in Hawai’i claim that the marine livestock trade decimates the fish populations of Hawaiian reefs. Supported by the snorkel travel industry, the group known as For the Fishes in late December 2019 said: “The most impacted species, including Yellow Tangs, certain butterflyfishes, and other rare native fishes, saw population declines ranging from 60% to 99% in the areas where they were taken. But the trend is reversing now that aquarium collecting is banned in West Hawai’i….”

“The most powerful point in a Draft Environmental Impact Statement just filed in late 2019 is that the Yellow Tang, which accounts for 97% of catch in West Hawai’i, has increased 100% in the open areas, 165% in closed areas, and 73% in marine life conservation districts since the 1999 baseline studies were conducted. The comprehensive fishery management plan in place is clearly working. The environmental review process clearly demonstrates the unique renewable nature of this fishery. We strongly feel that this fishery has always been a positive example of resource management for the State of Hawai’i and the reasons leading up to the temporary pause were never based on logic or sound reasoning.

“That being said, the last two years have been very trying on all the fishers whose lives were upended unnecessarily because of a few people that clearly don’t understand science or resource management. If a fishery with 20 years of scientific observation, that demonstrates sustainability (in fact increasing) still gets shut down, then how does any fishery survive?

“The numbers don’t lie: this fishery is absolutely sustainable because of the rapid replenishment of the fish that are captured. I do not hear substantive arguments coming from the opponents. I do hear them making emotional arguments about the morality of keeping fish as pets. That’s not a proper justification to shut down a viable fishery and interrupt people’s lives.”

Aquarists wishing to support the fishermen should have a look at the Pet Industry Joint Advisory Council message on page 96 of this issue.