Notes: Beautiful and bold, but not commonly collected, infrequently captive-raised available from Oceans Reefs and Aquariums (ORA). For a small fish, it has lots of attitude.

Could cause problems for tankmates in a smaller tank. Like some similar species, it is often in the surge zone, with adult pairs living in crevices. Females are brown with dark markings. Male colors intensify during aggressive/courtship encounters. Bonding can be surprisingly violent—pairs should be kept in larger tanks with lots of hiding places. ORA puts pairs together for spawning and then separates them.
—Scott W. Michael,
CORAL, May/June 2022

It is Chelmon mülleri, Müller’s Butterflyfish, (Klunzinger, 1879)
Maximum length: 18 cm (7 inches)
Distribution: Northern Australia, Queensland.
Similar to the much more common Copperband Butterflyfish, Chelmon rostratus, but reportedly a more hardy, and highly commendable aquarium fish. “Although not as colorful as its close relatives, this species is the best member of the genus Chelmon for the home aquarium,” says Reef Fishes author Scott Michael. Read more about it in CORAL’s July/August 2021 Issue.
Reference
Angelfishes & Butterflyfishes by Scott W. Michael

Currently on display with its mate at the Birch Aquarium at Scripps, La Jolla, California.

Read more about this extraordinary fish in the November/December Issue of CORAL MAGAZINE. Subscribe now to be sure of getting this issue. 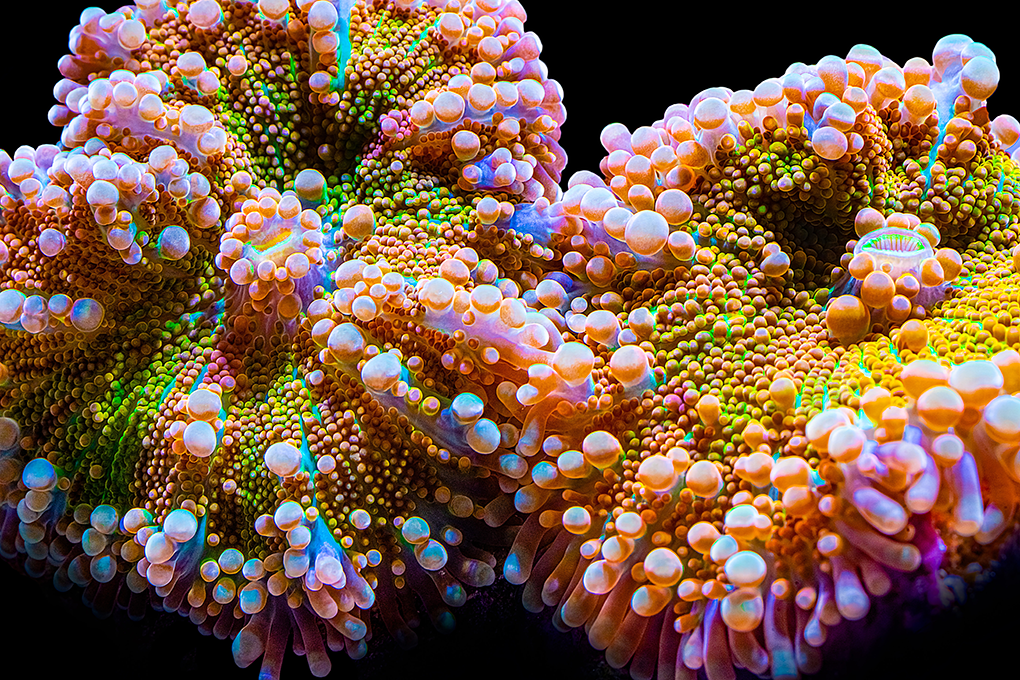 Geographic Origin: Indonesia
Light Level: Moderate
Flow Level: Low
Care Level: Easy
Notes: Even though this Ricordea yuma is usually easy to maintain, it can be one of the most beautiful center pieces of any reef aquarium for the beginner to the most advanced aquarists.
Ricordea yuma will readily eat any small, meaty foods, and will benefit from routine feedings. 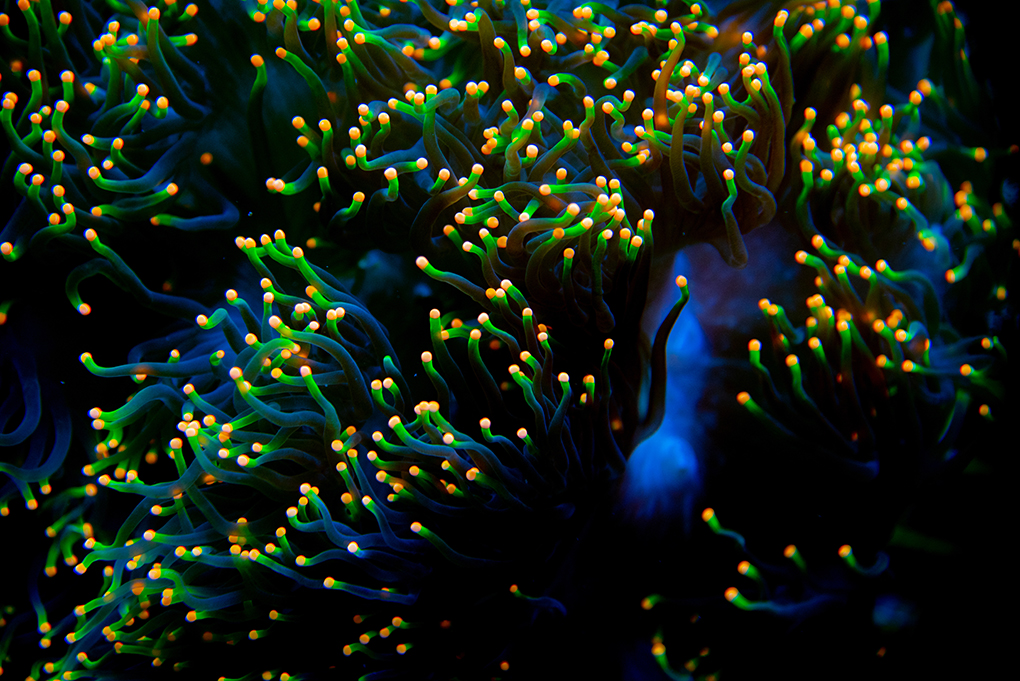 See a full-size print of this fabulous specimen in Reef Visions in the September/October CORAL. 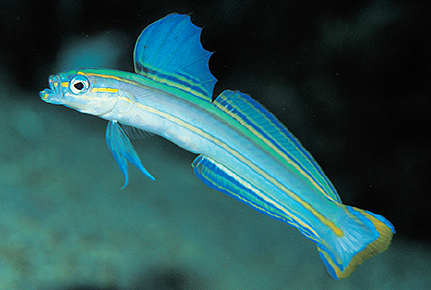 A deepwater species that is a good candidate for the peaceful reef aquarium, the Lined Dartfish is an Indo-Pacific fish that reaches a length of about 4 inches (10 cm) and feeds on zooplankton in mid-water. Read more about this and other dartfishes, genus Ptereleotris, in Scott Michael’s feature article in the September/October, 2020 issue of CORAL Magazine. 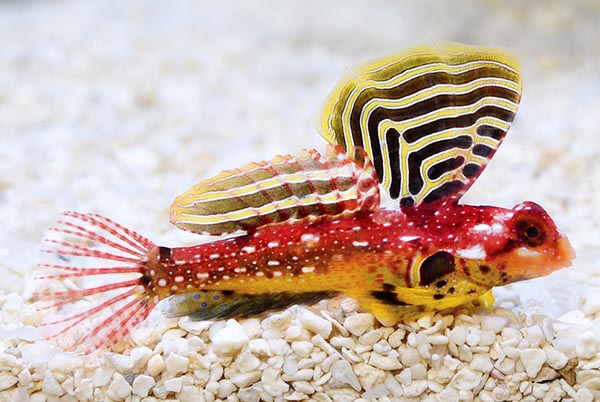 Having only been collected for the aquarium trade in the last decade, the Ruby Dragonet has become a reef aquarium favorite: it is visually stunning when in full display mode, it’s small and will eat readily if fed the proper micro-predator foods, and it even carries an exotic scientific name. According to lead author Yi-Kai Tea who described it in 2016, “The species is named after the red-robed and caped Sycorax warriors from the BBC sci-fi series ‘Dr. Who,’ in showing similarities in both coloration and grandiloquence of their garb. The epithet sycorax is a noun in apposition.” Since its debut in the aquarium trade, Synchirpus sycorax has been tagged with various common names: Ruby Red Dragonet, Ruby Dragonette, Sycorax Mandarinfish, and more.

Read all about it in Species Spotlight by Daniel Knop, CORAL July/August 2020. 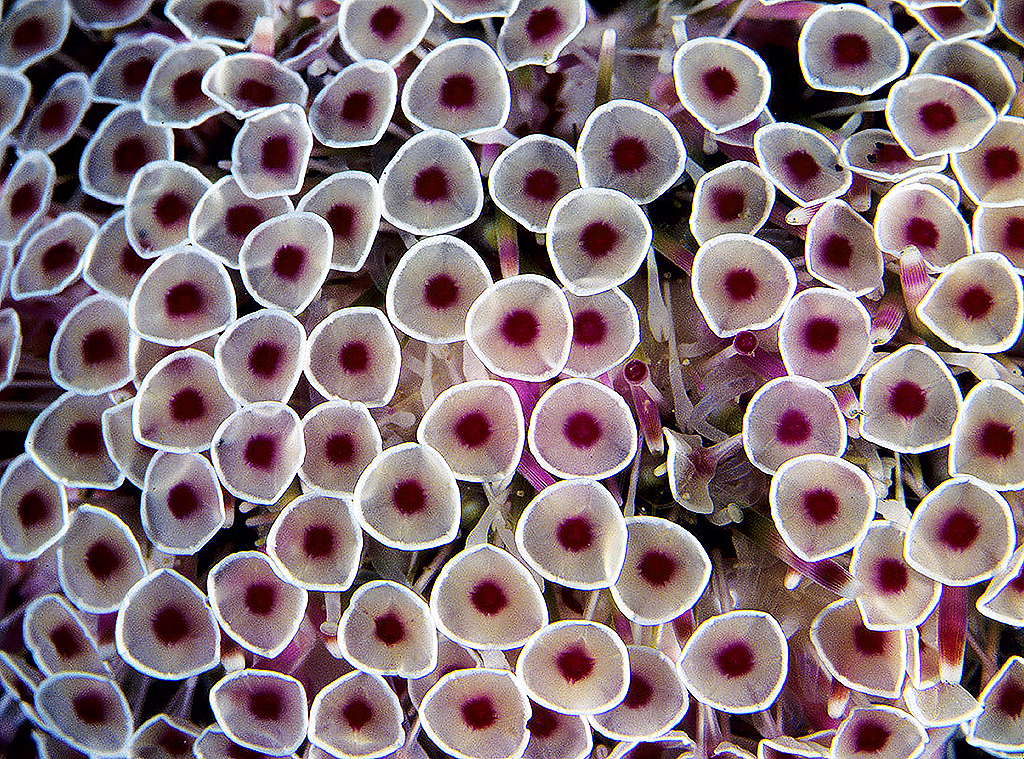 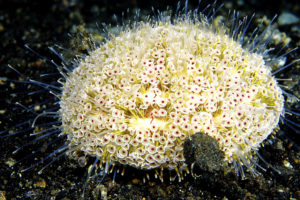 It may be lovely to behold, but this Indo-Pacific sea urchin can inflict paralyzing stings and it has been implicated in the deaths of divers who touched the blossom-like pedicillaria. These defensive appendages can grasp the soft tissue of a victim and release two or more toxins that can cause excruciating pain, shock, coma, and even death.

In 1935, Japanese marine biologist Tsutomu Fujiwara unwittingly picked up Flower Urchin brought to the surface in a fisherman’s net and later reported: “Instantly, I felt a severe pain … and I felt as if the toxin were beginning to move rapidly to the blood vessel from the stung area towards my heart. After a while, I experienced a faint giddiness, difficulty of respiration, paralysis of the lips, tongue and eyelids, relaxation of muscles in the limbs, was hardly able to speak or control my facial expression, and felt almost as if I were going to die. About 15 minutes afterwards, I felt that pains gradually diminish and after about an hour they disappeared completely. But the facial paralysis like that caused by cocainization continued for about six hours.”
—Tsutomu Fujiwara (1935). “On the poisonous pedicellaria of Toxopneustes pileolus (Lamarck)”. Annotationes Zoologicae Japonenses. 15 (1): 62–68.

Sources
• Read more about this and other fascinating echinoderms in the March/April 2020 issue of CORAL, with Dr. Ronald Shimek’s essential profile of the urchins, sea stars, brittle stars, crinoids, and sea cucumbers—some iconic members of the coral reef community but not all ideal or even safe for the curious aquarist.
• Fujiwara (1935) Quotation: Wikipedia.org
https://en.wikipedia.org/wiki/Toxopneustes_pileolus 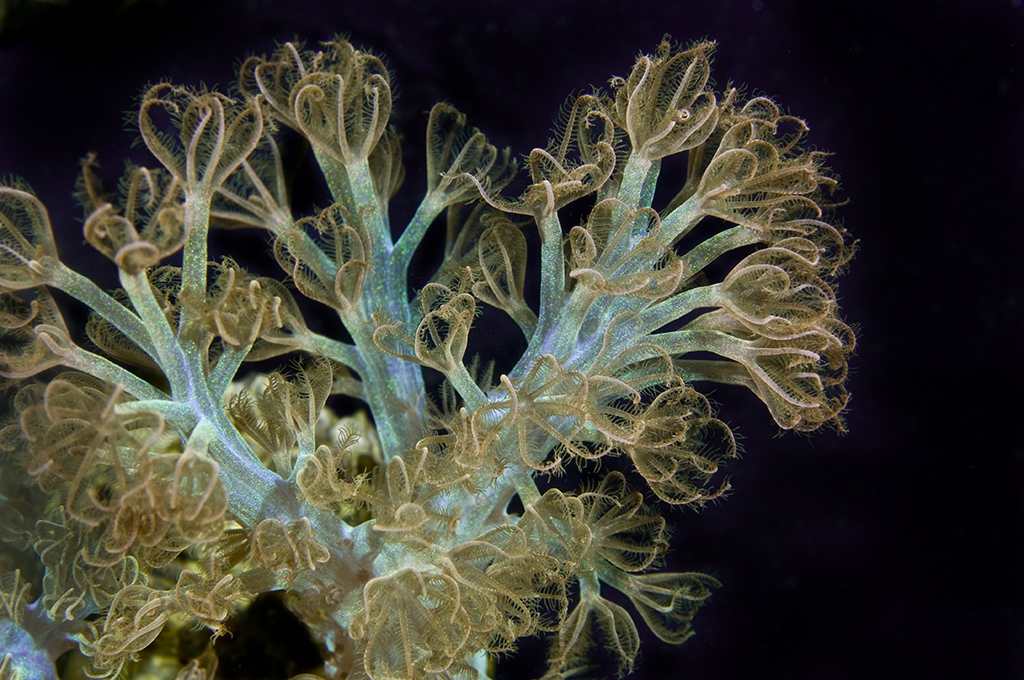 ORA’s Blue Cespitularia is a glittering, iridescent example of an exceptional octocoral cultivar made more accessible through intensive aquaculture efforts. 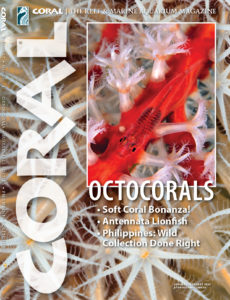 According to ORA: Blue Cespitularia is sometimes referred to as Blue Xenia. The variety ORA grows is a unique color form that has a turquoise body with elegant peachy – orange polyps. The color intensity of this soft coral varies greatly and is dependent of lighting conditions. In some settings the ORA Blue Cespitularia develops to have a sparkling metallic quality similar to very fine glitter. 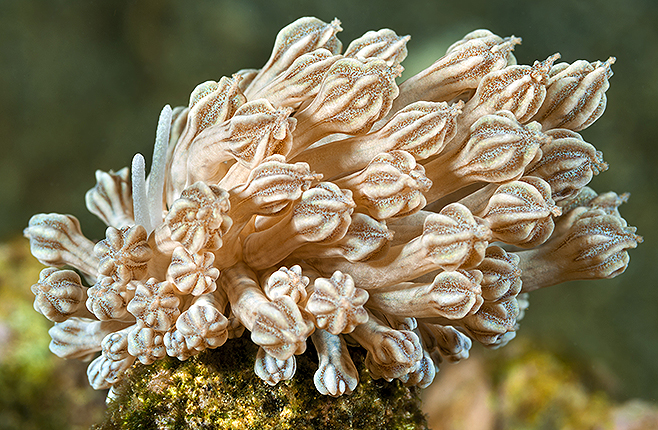 From the January’February 2020 Issue of CORAL Magazine: An amazing example of marine mimicry, this remarkable sea slug has evolved to appear as a perfect match for Xenia sp. soft coral. This species grows to about 4.5 cm (1.8 inches), and aquarists may find it hitchhiking into their reefscapes on imported colonies of Xenia. Sea slugs have a paired set of antenna-like sense organs called rhinophores, which can be spotted in this image upon careful inspection.

Phyllodesmium rudmani is reported to have photosynthetic symbiotic Symbiodinium zooxanthellae in its tissues.

Read a good account in the always informative Sea Slug Forum, which says: “This solar-powered aeolid is a remarkable mimic of the Xenia colonies on which it feeds, often nestling in cavities it has burrowed out in the base of the colony.” 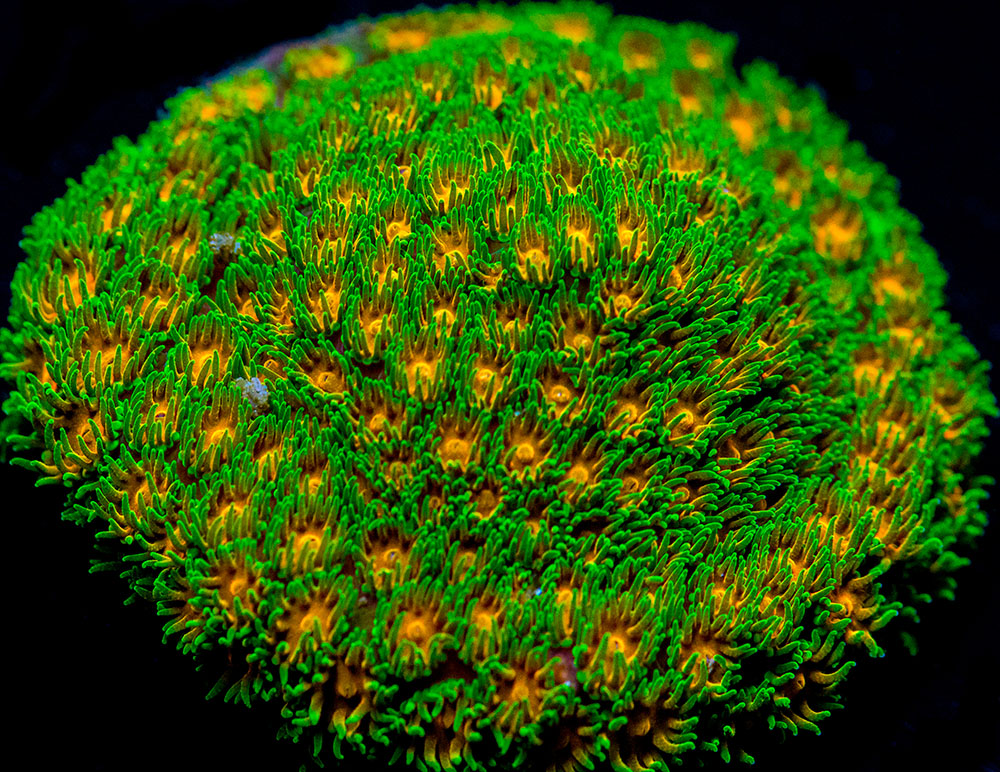 Leptastrea is a genus of encrusting reefbuilding stony corals from the Indo-Pacific. Previously assigned to the family Faviidae, it has been moved to uncertain status, Scleractinia incertae sedis, based on DNA testing. 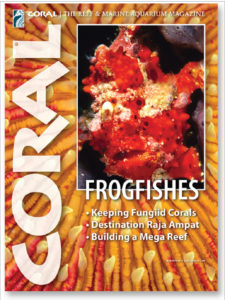 “Leptastrea purpurea has an extensive distribution and can be found from the reefs of the western Indian Ocean to the Indo-Pacific Coral Triangle to the Hawaiian Islands.

“The most astonishing and unique feature of L. purpurea is not, however, its apparent adaptability but its reproductive strategy: so-called brooding, in which parent colonies harbor their growing progeny before releasing them. The extraordinary thing about the reproduction in this species isn’t, however, the strategy, but the daily release of larvae. This circumstance makes L. purpurea a particularly suitable species for performing experiments with planula larvae.”