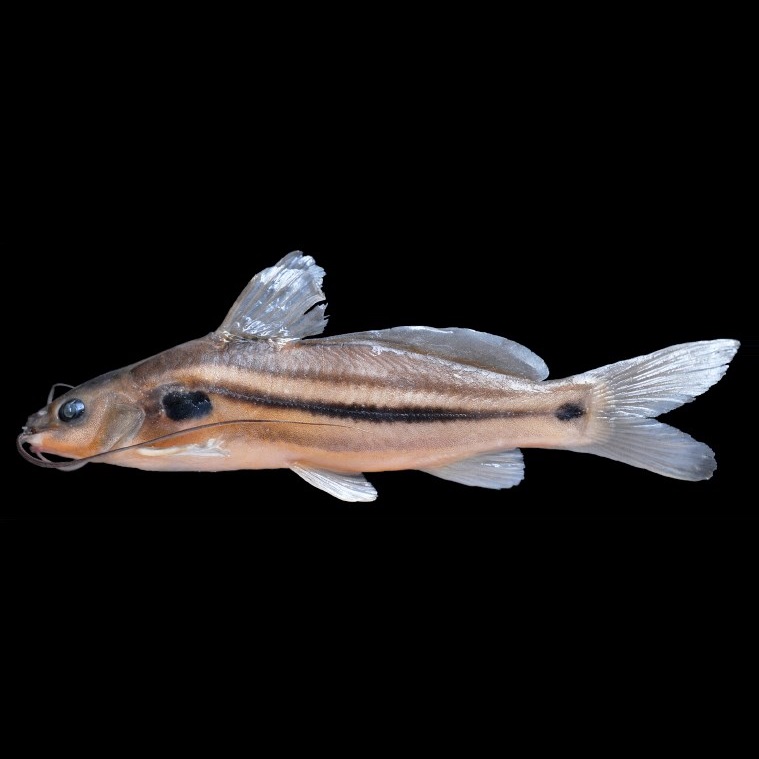 There is a new catfish known to science! Mystus prabini was formally described this summer by a team of eight scientists in the journal Zootaxa. Similar to nine other currently known Mystus catfish, this small bagrid catfish has a long fleshy adipose fin that stretches to the base of the dorsal fin. Mystus prabini, however, stands out from the others as it exhibits a distinct narrow black mid-lateral band that extends the length of the body from a dark tympanic spot to the round spot at the caudal-fin base. Genetically, its closest known relatives are M. bleekeri and M. albolineatus. Keep an eye out for this fish; perhaps it has already been unknowingly imported into the trade.

Mystus prabini, a new species, is described from the Sinkin and the Dibang River in the Lower Dibang Valley District of Arunachal Pradesh, India. The new species differs from all South-Asian congeners except M. bleekeri, M. cavasius, M. zeylanicus, M. falcarius, M. seengtee, M. cineraceus, M. ngasep, M. rufescens and M. ankutta in having a long adipose fin that reaches anteriorly (vs. distinctly does not reach) the base of the last dorsal-fin ray. The new species can be distinguished from the named nine species in having (vs. lacking) a narrow black mid-lateral stripe extending from the anterior region of tympanic spot to the rounded black spot at the caudal fin base. The analysis of mitochondrial cytochrome c oxidase subunit I (COI) gene sequence shows that the K2P value between Mystus prabini and all other Mystus species ranges from 8.6-22.1%. Mystus prabini is closest genetically to M. bleekeri and M. albolineatus, from which it has a genetic distance of 8.6% and 13.9%, respectively. The genetic distance (K2P) between the new species and M. dibrugarensis is 21.1%.