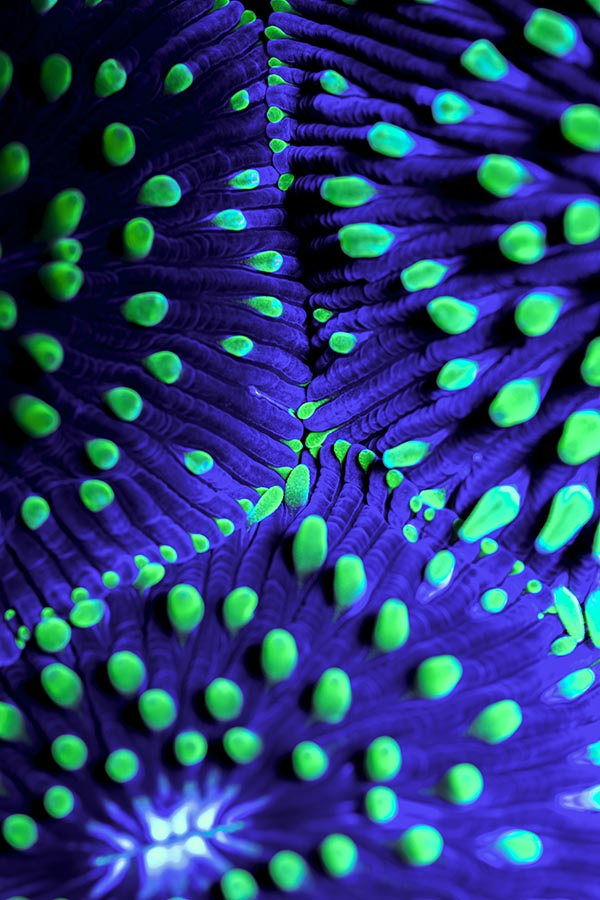 While gathering up info for the Coral Visions column, we traced this amazing coral back to the source—Colin Foord at Coral Morphologic in Miami, Florida. Foord shared the incredible backstory and another image depicting the mother colony of these corals.

“I call this coral the ‘Mons Venus’ Fungia. The original mother colony came from Vincent Chalias in Indonesia, probably six years ago. It was perfectly mons-pubis-shaped; I’ve never seen another Fungia like it. Several years ago, the original coral was stung by a neighboring coral, and I subsequently lost it. I put the skeleton behind a rock in the aquaculture tub and promptly forgot about it.

“A few months later, when I was doing a water change, I noticed scores of tiny polyps budding off the old skeleton. It is now a bonafide Fungia tree. I dug up an old photo I took of it a couple of years ago where it looks an awful lot like a Blastomussa merletti.” 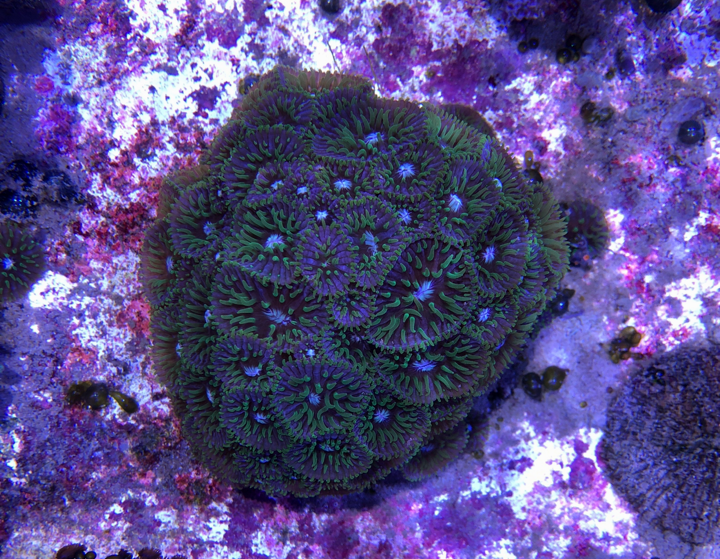 How the Mons Venus Fungia Reproduces

“After the clones grow to a size of roughly 1 cm (0.4 inches) in diameter, they drop off the mother on their own and then start moving around the tub to find some available space. Then a new clone starts growing again from the head of the anthocauli where it just popped off. As far as I can tell, the mother skeleton will keep producing more and more. I’m through at least three generations of clones popping off the same anthocauli. I probably have about 200 free-living ones in my system, plus another several hundred babies still on the mother.”

“Interestingly, when I switched from Kessil to Radion G4 Pros, the purple color of this coral became more intense, and the green colors shifted towards yellow. However, these changes occurred only on the new emerging growths. In other words, the ones that started life under the Kessils have continued to stay a little more green and brownish under the Radions, whereas the new ones that started life under the Radions are noticeably more colorful.”

Foord reminds us to keep this normal reproductive strategy for Fungia in mind if we ever lose a plate coral. “Presumably, these Fungia will also be very prolific if they die in the aquarium. I always hold onto my plate coral skeletons for as long as possible in the aquarium, just to see what might emerge. Also, all the babies are perfectly disc-shaped, so the mother must have formed under some unusual conditions in the wild to get the shape that it ultimately took!

“I think most of the colorful plate corals sold in the hobby are actually Cycloseris, which I have not had very much long-term success with. The trick to finding a ‘resurrectable’ Fungiid is to flip over the plate and look for the ‘nipple’ in the center, which is where it was once connected to the substrate as a recruit or anthocauli from a previous adult.”

While we list this coral as Fungia repanda, some sources will now show it as Lithophyllon repanda due to a revision in 2011. We follow the lead of Charles Veron & Corals of the World, and will continue to utilize the genus Fungia for this species at this time.

Hard to believe, but this is just one of several visually arresting corals featured in the forthcoming November/December 2019 issue of CORAL Magazine. Don’t miss out, subscribe today!