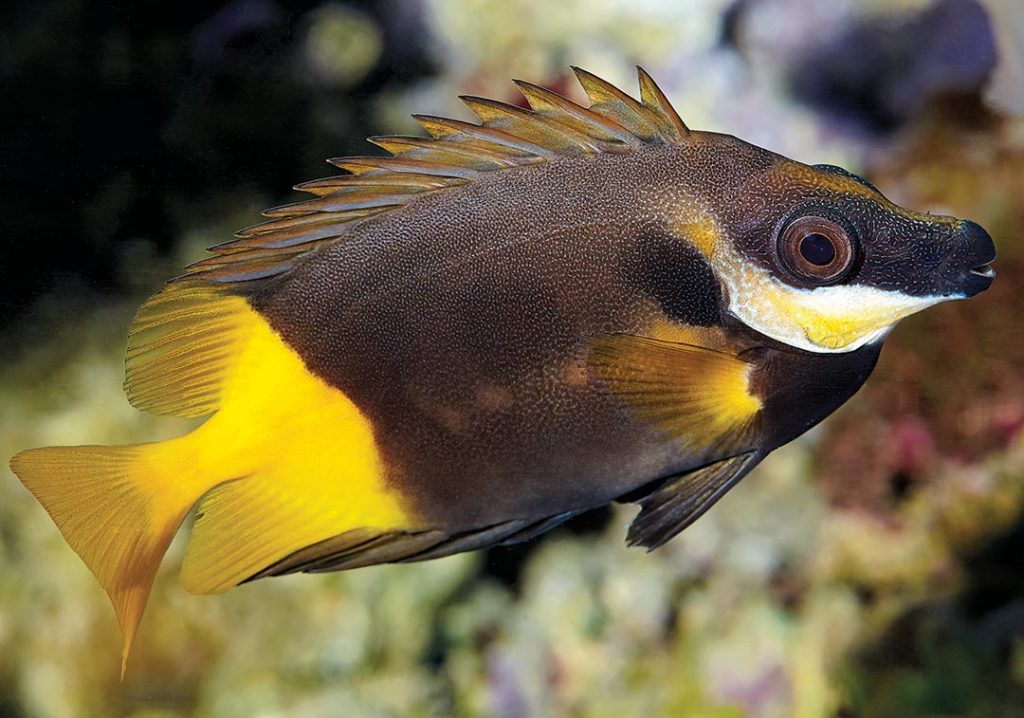 The rabbitfishes or foxfaces are admirable marine aquarium fishes, hardy and active, suited to beginners and experts alike. They are generally peaceful herbivores with hare-like snouts for nibbling algae, but conspecifics will battle each other until a bonded pair forms. This is a less common import with distinctive coloration, dominated by black and/or very dark gray covering more than two-thirds of the body back from the head. Only the rear part of the body, including the caudal fin, is yellow, with the black extending further back on the dorsal and anal fins. There are, in fact, three colors on this fish, as the Bicolored Foxface, like its sibling taxa Siganus vulpinus and S. magnificus, has a broad white stripe extending from the throat region to behind the eye. The stripe can darken considerably depending on the fish’s mood. Maximum body length is 9.5 inches (24 cm), usually less in the aquarium.

Editor’s Note: Fishbase lists this species as “… endemic to Fiji, with strays recorded from New Caledonia.”

This raises immediate questions, as the islands of Fiji are not geographically or biologically isolated, the primary prerequisites for the development of endemic species. Additionally, members of the Siganid family are pelagic spawners whose larvae can be widely distributed by ocean currents.

When asked about this, Dr. John E. Randall, the world’s foremost marine ichthyologist, said flatly: “Siganus uspi is not endemic to Fiji.”

There are, in fact, three colors on this fish, as this species, like its sibling taxa Siganus vulpinus and S. magnificus, has a broad white stripe extending from the throat region to behind the eye. The stripe can darken considerably depending on the fish’s mood. Maximum body length is 9.5 inches (24 cm).

Siganus uspi prefers to live among stony corals on the edge of the reef, where it almost always travels in pairs and feeds on algae. Young fishes move around in shoals, where they associate with Sargassum and feed on both algae and small sessile invertebrates.

The aquarium for these rabbitfishes shouldn’t be too small, as they can reach lengths of 8 inches (20 cm) or more and are constantly roving the reefscape. Consider a six-foot-long, 125- gallon tank the minimum (2 m/475-L). If possible, they should be maintained in pairs, but putting together a pair isn’t easy, as individuals of the same sex are often aggressive towards one other. This can lead to serious injuries and cause the subordinate individual to hide, fail to feed, and perish. The best way is to acquire a harmonious pair from a dealer. In principle, maintaining a pair is unproblematic as long as sufficient food is available. Hungry fish will compete and fail to thrive.

Siganus uspi is not overly susceptible to disease, and it is a forceful fish that is able to look after itself in the aquarium by virtue of its sharp-pointed spines. Stout, needle-sharp spines in the dorsal and anal fins possess venom glands, which release a toxin that any attacker finds instantly painful. The firays are T-shaped in cross-section, resulting in two longitudinal pits, each containing a venom gland (Mebs 2000). This toxin isn’t overly threatening to humans, but it causes severe pain that takes hours to fade. Hence, it is strongly advised not to catch these fishes by hand or otherwise handle them without precautions.

Feed at least two to three times daily or have dried macroalgae constantly available for grazing. In addition to the usual diet of frozen food, algae are very important for these rabbitfishes. They will eat many species of macroalgae and seaweeds, including Ulva, Gracilaria, Caulerpa, all manner of herbivore rations, and Nori algae.