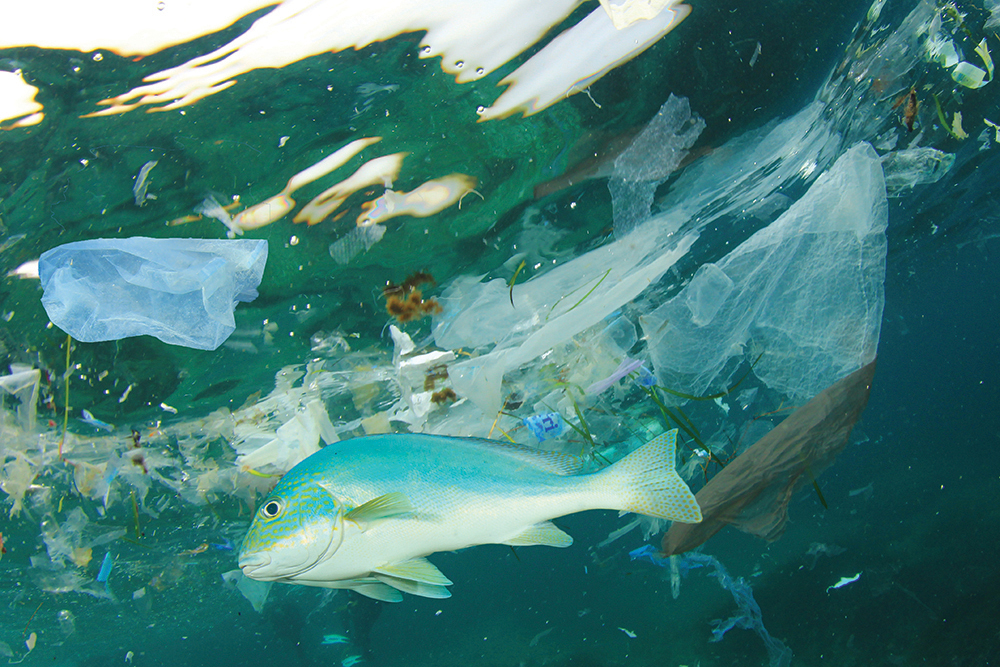 There are now more pieces of plastic in Earth’s oceans than stars in the sky. Image: Rich Carey/shutterstock

An eyesore of gigantic proportions, the Great Pacific Garbage Patch is a floating, drifting mass of plastic trash three times the size of France. It’s located in the Eastern Pacific gyre between Hawaii and California. There are five major islands of drifting plastic in the world’s seas, two in the Pacific, two in the Atlantic, and one in the Indian Ocean. About half of the debris in this vast vortex of flotsam is comprised of ghost nets and synthetic ropes used in fishing, plus mountains of plastic film, foam coolers, yogurt containers, and lost flip-flops. Now, however, scientists say it may be the plastics we can’t see that pose the most insidious threat to life on Earth.

Microplastics (MPs) are pieces smaller than 5 mm (less than the size of pencil eraser), and they include countless tiny particles that one scientist says “are like flecks of pepper in a pot of soup.” Some scientists think that the estimated 50 trillion pieces of microplastic already in the earth’s oceans outnumber all the stars in the known universe, and they are being found infiltrating marine food webs. While larger pieces of plastic are ingested by everything from baby sea turtles to whales, microplastics are being eaten as pseudoplankton by marine animals such as mollusks, copepods, and krill near the bottom of the food chain. Larval marine life is known to target nano-plastic particles; the larvae are eaten by fishes such as anchovies, which deliver a plastic payload to the larger species that feed upon them.

We don’t yet know exactly how dangerous microplastics are in fishes, as the research is still in its infancy. Larger pieces of MPs can accumulate in an animal’s digestive tract, causing malnutrition or even death. The situation is even more sinister with the so-called “small microplastics” (with particle size less than 0.2 mm), because entry into the circulatory systems, musculature, and other organs of the body is considerably more likely. The result is that not only are physiological processes disturbed, but ultimately the particles land on our plates via the food cycle. 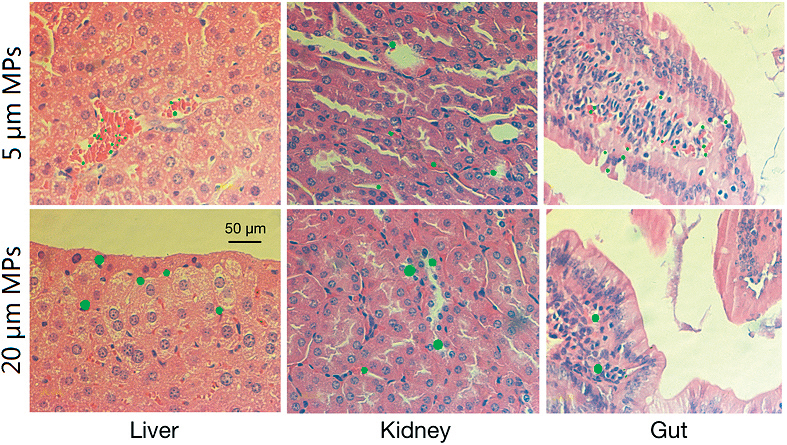 In order to investigate these relationships, Dr. Thomas Lang and his colleagues at the Thünen Institute of Fisheries Ecology in Bremerhaven, Germany, are conducting experiments with small fishes whose food has been deliberately laced with plastic particles of varying size and composition. The tissues of the fishes are analyzed to find out which materials in which particle sizes make the transit from the intestines to the body tissues, and what damage they cause there.

A major source of microplastics is microbeads in personal care products and cleaning products (toothpastes, skin scrubs, detergents), and many environmental groups are calling for a ban on these unseen pollutants that make their way via human waste water into lakes, rivers, and the oceans. Current methods do not remove MPs from sewage treatment plants. This water provides a growing source of micro debris to be consumed by aquatic life and, eventually back into the human diet. Recent studies have found high rates of microplastic content in tap water, bottled water (especially in plastic containers), American and European beers, and even sea salts made from ocean water, especially those from Asia.

The other main source of MPs is plastic trash that breaks down in the environment. Single-use plastic packaging such as PET bottles and food containers is also particularly problematic, as it takes around 450 years to disintegrate. Asian, African, and Middle Eastern countries are considered major sources of plastic wastes disposed of at sea.

One obvious long-term solution to the problem would be global moves to biodegradable plastics and sustainable packaging materials. An example of this is seen in the work of Professor Stephanie Stute of Nuremberg Technical College. She is working on the bio-based production of the biodegradable plastic polyhydroxybutyrate (PHB). Many bacteria, for example the soil microbe Cupriavidus necator, store energy inside their cells by synthesizing PHB from starches (like glycogen) in order to be able to release this energy again in times of shortage. This mechanism can be exploited by breeding the bacteria in large quantities and providing them with glycogen (which is an abundant waste product from the manufacture of biodiesel and usually has to be disposed of for a charge).

If it proves possible to make this type of plastic production as cost-effective as that of conventional materials, this might be part of a packaging revolution that is currently unfolding and that, in the long term, might reduce the colossal amount of plastic waste making its way into the sea.
—Daniel Knop

1. Reduce Your Use of Single-Use Plastics Wherever you live, the easiest and most direct way to get started is by reducing your own use of single-use plastics. Single-use plastics include plastic bags, water bottles, straws, cups, utensils, dry-cleaning bags, take-out containers, and any other plastic items that are used once and then discarded.

2. Recycle Properly This should go without saying, but when you use single-use (or other) plastics that can be recycled, always be sure to recycle them. At present, just 9% of plastic is recycled worldwide. Recycling helps keep plastics out of the ocean and reduces the amount of “new” plastic in circulation.

3. Participate In (or Organize) a Beach or
River Cleanup Help remove plastics from the ocean and prevent them from getting there in the first place by participating in or organizing a cleanup of your local beach or waterway.

4. Support Bans Many municipalities around the world have enacted bans on single-use plastic bags, takeout containers, and bottles. You can support the adoption of such policies in your community.

5. Avoid Products Containing Microbeads Tiny plastic particles, called “microbeads,” have become a growing source of ocean plastic pollution in recent years. Microbeads are found in some face scrubs, toothpastes, and bodywashes, and they readily enter our oceans and waterways through our sewer systems and affect hundreds of marine species. Avoid products containing plastic microbeads by looking for “polythelene” and “polypropylene” on the ingredient labels of your cosmetic products. Find a list of products containing microbeads on the Beat the Microbead website (link below).

6. Spread the Word Stay informed on issues related to plastic pollution and help make others aware of the problem. Check out plastic pollution–focused documentaries, like “Bag It,” “Addicted to Plastic,” “Plasticized,” or “Garbage Island.”