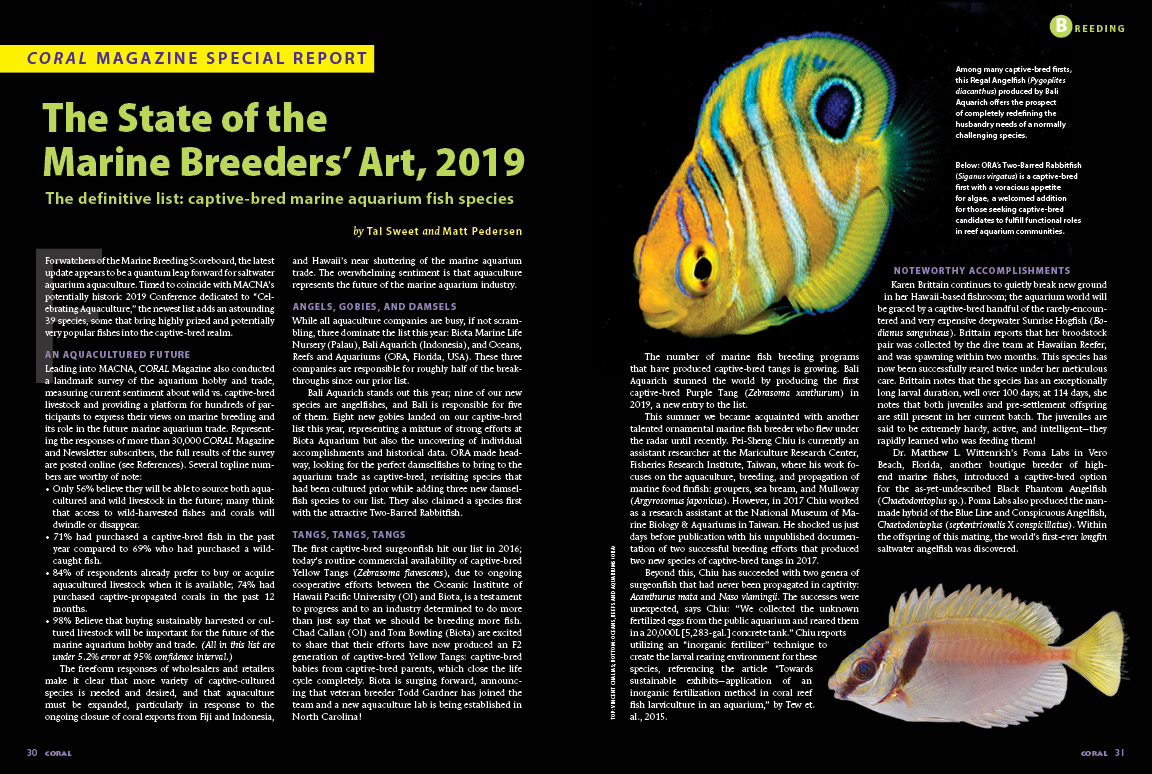 The CORAL Magazine & Marine Breeding Initiative recap of captive-breeding breakthroughs has been published in the September/October 2019 issue of CORAL Magazine.

A CORAL SPECIAL REPORT: The State of the Marine Breeder’s Art, 2019

Excerpt from the September/October 2019 issue of CORAL Magazine – subscribe today!

For watchers of the Marine Breeding Scoreboard, the latest update appears to be a quantum leap forward for saltwater aquarium aquaculture. Timed to coincide with MACNA’s potentially historic 2019 Conference dedicated to “Celebrating Aquaculture,” the newest list adds an astounding 39 species, some that bring highly prized and potentially very popular fishes into the captive-bred realm.

Leading into MACNA, CORAL Magazine also conducted a landmark survey of the aquarium hobby and trade, measuring current sentiment about wild vs. captive-bred livestock and providing a platform for hundreds of participants to express their views on marine breeding and its role in the future marine aquarium trade. Representing the responses of more than 30,000 CORAL Magazine and Newsletter subscribers, the full results of the survey are posted online (see References). Several topline numbers are worthy of note:

The free-form responses of wholesalers and retailers make it clear that more variety of captive-cultured species is needed and desired, and that aquaculture must be expanded, particularly in response to the ongoing closure of coral exports from Fiji and Indonesia, and Hawaii’s near shuttering of the marine aquarium trade. The overwhelming sentiment is that aquaculture represents the future of the marine aquarium industry. 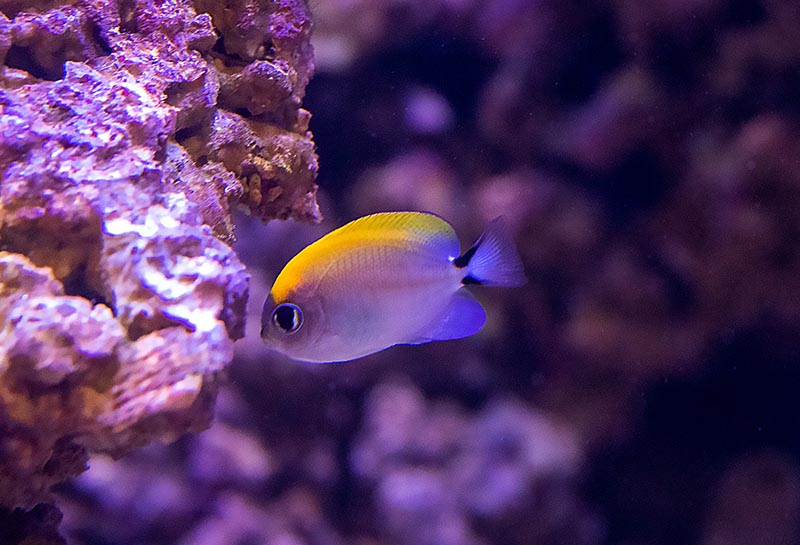 The Industry Gives Us Angels, Gobies, and Damsels

While all aquaculture companies are busy, if not scrambling, three dominate the list this year: Biota Marine Life Nursery (Palau), Bali Aquarich (Indonesia), and Oceans, Reefs and Aquariums (ORA, Florida, USA). These three companies are responsible for roughly half of the breakthroughs since our prior list.

Bali Aquarich stands out this year; nine of our new species are angelfishes, and Bali is responsible for five of them. Eight new gobies landed on our captive-bred list this year, representing a mixture of strong efforts at Biota Aquarium but also the uncovering of individual accomplishments and historical data. ORA made headway, looking for the perfect damselfishes to bring to the aquarium trade as captive-bred, revisiting species that had been previously cultured, while adding three new damselfish species to our list. They also claimed a species first with the attractive Two-Barred Rabbitfish. 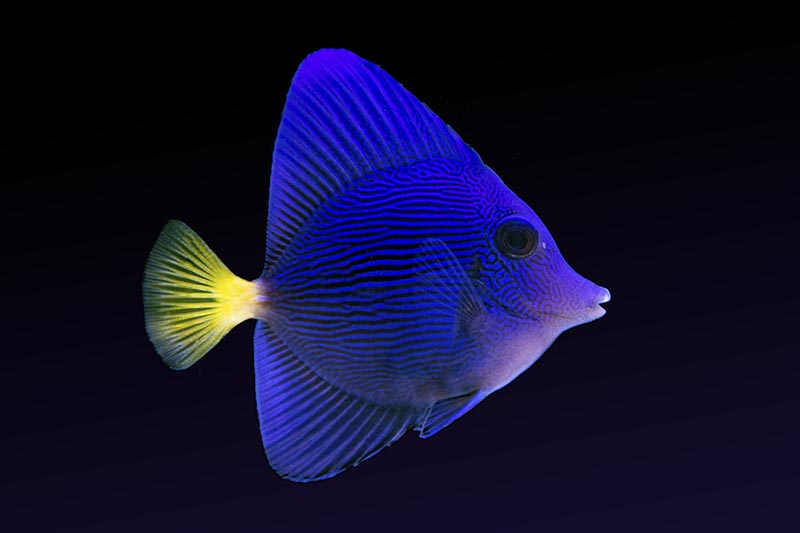 The first captive-bred surgeonfish hit our list in 2016; today’s routine commercial availability of captive-bred Yellow Tangs (Zebrasoma flavescens), due to ongoing cooperative efforts between the Oceanic Institute of Hawaii Pacific University (OI) and Biota, is a testament to progress and to an industry determined to do more than just say that we should be breeding more fish. Chad Callan (OI) and Tom Bowling (Biota) are excited to share that their efforts have now produced an F2 generation of captive-bred Yellow Tangs: captive-bred babies from captive-bred parents, which close the life cycle completely. Biota is surging forward, announcing that veteran breeder Todd Gardner has joined the team and a new aquaculture lab is being established in North Carolina!

The number of marine fish breeding programs that have produced captive-bred tangs is growing. Bali Aquarich stunned the world by producing the first captive-bred Purple Tang (Zebrasoma xanthurum) in 2019, a new entry to the list.

This summer we became acquainted with another talented ornamental marine fish breeder who flew under the radar until recently. Pei-Sheng Chiu is currently an assistant researcher at the Mariculture Research Center, Fisheries Research Institute, Taiwan, where his work focuses on the aquaculture, breeding, and propagation of marine food finfish: groupers, sea bream, and Mulloway (Argyrosomus japonicus). However, in 2017 Chiu worked as a research assistant at the National Museum of Marine Biology & Aquariums in Taiwan. He shocked us just days before publication with his unpublished documentation of two successful breeding efforts that produced two new species of captive-bred tangs in 2017.

Beyond this, Chiu has succeeded with two genera of surgeonfish that had never been propagated in captivity: Acanthurus mata and Naso vlamingii. The successes were unexpected, says Chiu: “We collected the unknown fertilized eggs from the public aquarium and reared them in a 20,000L [5,283-gal.] concrete tank.” Chiu reports utilizing an “inorganic fertilizer” technique to create the larval rearing environment for these species, referencing the article “Towards sustainable exhibits—application of an inorganic fertilization method in coral reef fish larviculture in an aquarium,” by Tew et. al., 2015. 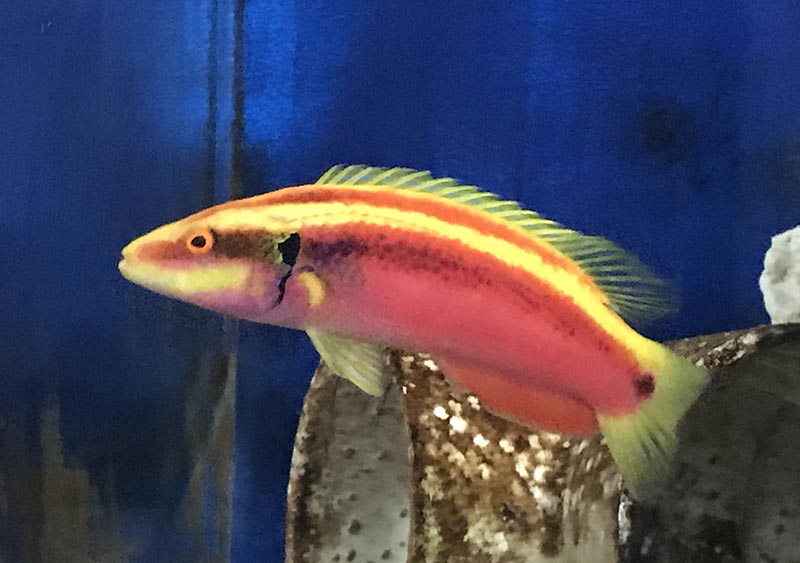 Karen Brittain continues to quietly break new ground in her Hawaii-based fishroom; the aquarium world will be graced by a captive-bred handful of the rarely-encountered and very expensive deepwater Sunrise Hogfish (Bodianus sanguineus). Brittain reports that her broodstock pair was collected by the dive team at Hawaiian Reefer and was spawning within two months. This species has now been successfully reared twice under her meticulous care. 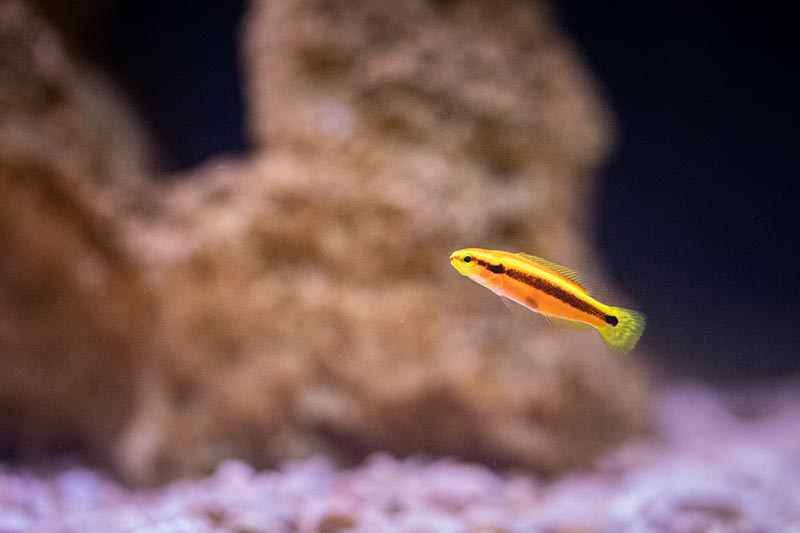 Brittain notes that the species has an exceptionally long larval duration, well over 100 days; at 114 days, she notes that both juveniles and pre-settlement offspring are still present in her current batch. The juveniles are said to be extremely hardy, active, and intelligent—they rapidly learned who was feeding them! 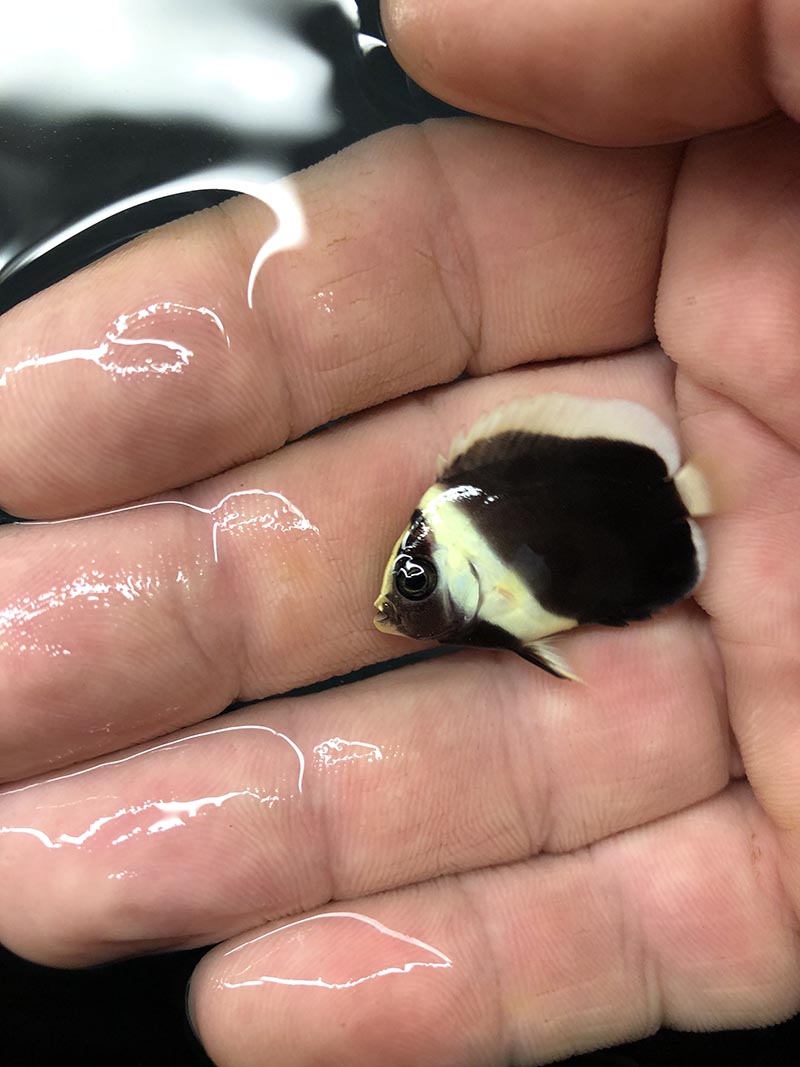 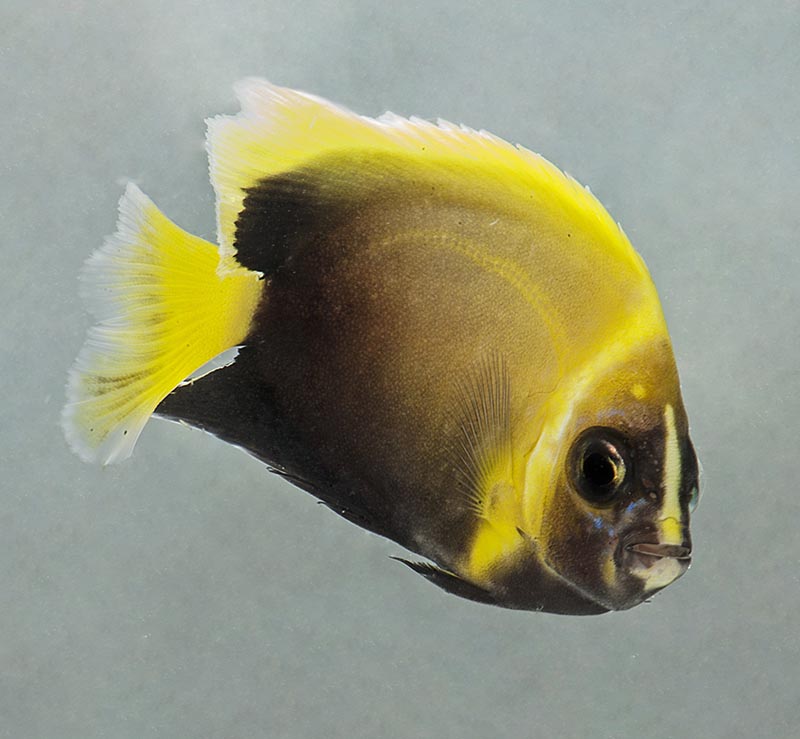 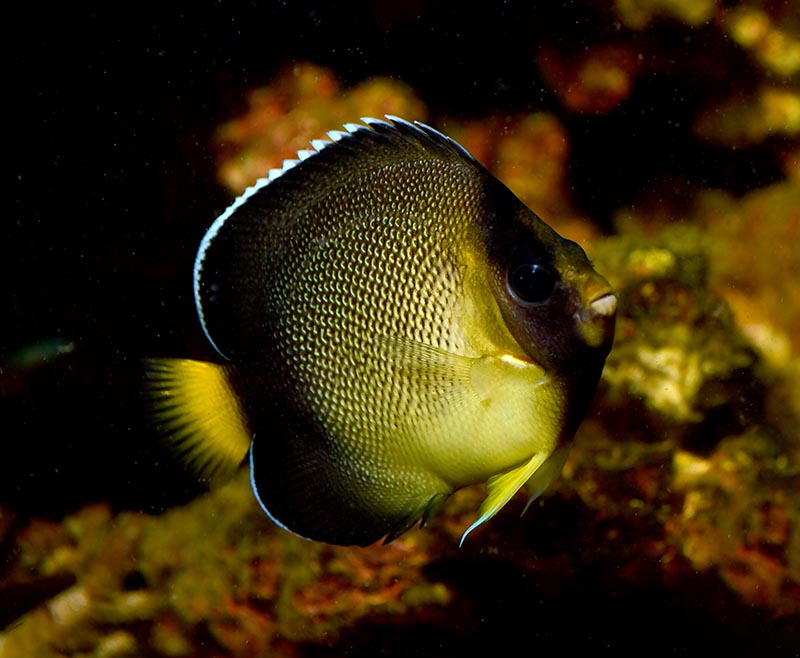 In another angelfish milestone, Tennessee-based Sustainable Aquatics tackled the production of three species of angelfish in 2018, one of which resulted in a species first with a captive-bred Cream Angelfish (Apolemichthys xanthurus).

At the urging of Jonathan Foster, we’ve decided to include monos on our species list. While the aquarium trade often considers them to be freshwater or brackish-water aquarium species, the reality is that adults are pelagic-spawning marine fish, and the larvae can only be reared in saltwater. While juveniles can inhabit environments of reduced salinity, they do not require it; the reality is that Monos are ornamental marine fish, and they provide an active, flashy, silvery display when kept in shoals. University of Florida’s Tropical Aquaculture Lab was responsible for the first captive production of the Sebae Mono (Monodactylus sebae) in 2007. Foster was part of that research and in 2015, his company FishEye Aquaculture (Florida) successfully commercialized the species for the aquarium trade. It’s unclear who first pioneered the breeding of the more widespread Silver Mono (Monodactylus argenteus), but FishEye routinely produces this species as well.

Foster has leveraged his existing skill set with breeding grunts to claim a species first this year with the beautiful and mostly monochromatic Cottonwick Grunt (Haemulon melanurum), a fish destined to be snapped up by public aquariums looking to source captive-bred species for use in creating large schools in big display tanks.

Researchers Dr. Cortney Ohs, Benjamin Lovewell, Paul Schlict, and Fred Shopnitz, working at University of Florida’s Indian River Research and Education Center with Rising Tide Conservation, added a beautiful and functional butterflyfish to the list: the Banded Butterflyfish (Chaetodon striatus), which happens to be a fairly good destroyer of Aiptasia in a reef aquarium, and which will leave your coveted SPS alone (a classic “reef-safe with caution” warning applies here!). 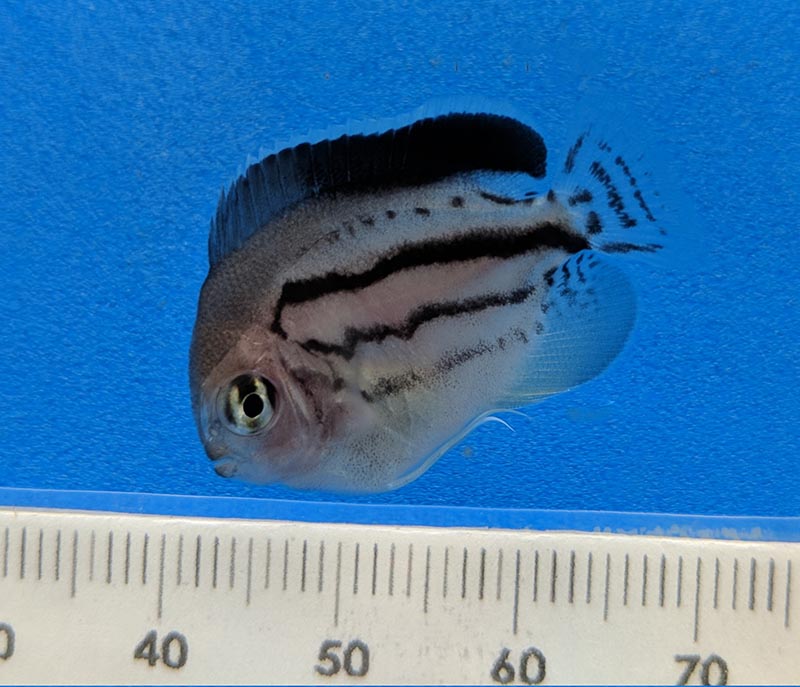 We’re not sure how we overlooked the breeding of Lamarck’s Angelfish (Genicanthus lamarck); Noel Heinsohn, now the Hatchery Manager for Fundación Grupo Puntacana (Dominican Republic), successfully reared this species in 2017 while serving as the Aquaculture Aquarist at the Long Island Aquarium (New York). The captive breeding of the Lamarck’s Angelfish was repeated just months later by Tim Morrissey, Andrew Hinrichs, and colleagues at Omaha’s Henry Doorly Zoo and Aquarium (Nebraska) in 2017, and then again in 2018.

It may seem that little headway has been made by amateur breeders; professional breeders, large-scale operations, and research programs are responsible for nearly all the additions to the list this year. But that’s not to say there isn’t room out there for the home hobbyist or casual breeder to claim a species first of their own. Just as August started, German aquarist Herbert Nigl, proprietor of the wholesale operation Aquarium Dietzenbach, shared definitive success breeding the Hi-Fin Red Banded Goby (Stonogobiops nematodes). We are excited to share the success of students and faculty at Southampton High School on Long Island, New York, who tackled the challenge of breeding the rarely encountered Lagoon Shrimp Goby (Cryptocentrus cyanotaenia), a story we plan on sharing in more detail in the near future.

Orange Common Name = New to the list this year
Pink Common Name = New to the list this year, but as a formerly overlooked accomplishment
Green = Commonly Available. Easy to find as a captive-bred fish, often from more than one source, throughout 2018 and the first half of 2019.
Blue – Moderate to Low. Might have taken some searching, and availability may have been limited, potentially only with one source, but was reasonably obtainable as a captive-bred fish in 2018/2019.
Purple = Scarce. Generally only one source or breeder is known, and potentially only a handful of specimens may have been available. You may have “had to know someone” or even know the breeder directly in order to obtain them as captive-bred fish during 2018/2019.
Black = None. The authors and consulted parties were unaware of any retail availability of this species from a captive-bred source during 2018/2019.