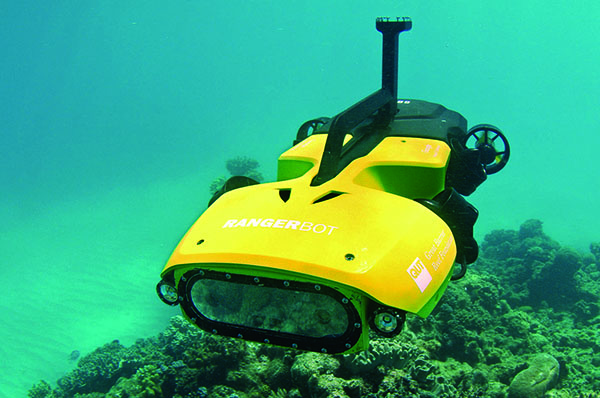 Could a submersible robot save the world’s struggling coral reefs? A team of scientists in Australia believes it can, and they want to use their invention, a piece of submersible wizardry that can zap coral predators and even spew live coral larvae to prove it.

RangerBot burst onto the marine science scene in 2016, when a robotics and autonomous systems program at the Queensland University of Technology (QUT), in partnership with the Great Barrier Reef Foundation, debuted a high-tech, low-cost, semi-autonomous robot that weighed just 33 pounds (15 kg) and measured 30 inches (75 cm) long.

RangerBot, as they called it, was designed specifically for underwater applications, and it immediately garnered a great deal of attention. The year it came out, it won the $75,000 Google Impact Challenge People’s Choice Prize for its potential to protect coral reefs worldwide with its innovative design—quite a debut for a robot about the size of a small dog. Controlled by an iPad, RangerBot excels at “real-time navigation, obstacle avoidance, and complex science missions,” says Professor of Robotics Matthew Dunbabin of the Institute for Future Environments, who developed RangerBot with Dr. Feras Dayoub of QUT University.

RangerBot’s first task, funded by the Google prize money, was straightforward but revolutionary. Professors Dunbabin and Dayoub programmed RangerBot to inject Crown-of-Thorns starfish, which eat corals and are responsible for inflicting wide swaths of destruction on the reef, with a fatal dose of a chemical that kills the starfish but doesn’t affect any other reef life. RangerBot’s accuracy in this application was an astounding 99.4 percent. 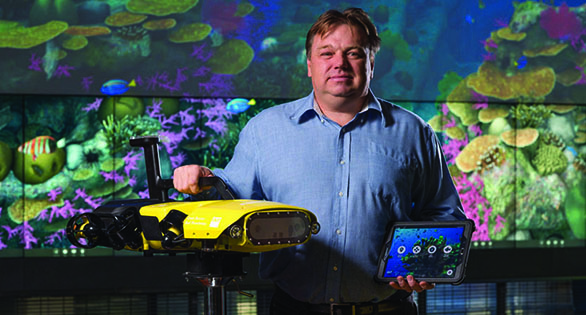 A robot has many distinct advantages over a human in a marine setting. Because it can stay underwater three times longer than a human can, it can have a much broader impact over a shorter period. Unlike a human, RangerBot can collect a huge amount of data and doesn’t have to worry about weather conditions on its dives. On trips to the reef, RangerBot has collected data on bleaching, pollution/water quality, invasive species, and more. It can make a detailed map of the reef and ocean floor, and it has excellent obstacle avoidance (it moves in all directions).

After RangerBot’s success destroying Crown-of-Thorns, the Australian Institute of Marine Science (AIMS) partnered with QUT to use RangerBot for data collection and underwater observation to improve coral reef health. In November 2018, RangerBot developers won the Great Barrier Reef Foundation’s $300,000 Out of the Blue Box Reef Innovation Challenge. QUT scientists used the prize money from the GBR Foundation to fund a program using RangerBot to spread coral larvae on areas of reef damaged by bleaching. They called this incarnation of the robot LarvalBot, as the technique of seeding coral reefs with reared larvae is called larval restoration. This technique was pioneered by Professor Peter Harrison of Southern Cross University, who worked with Professor Dunbabin on the LarvalBot project.

Just six weeks after they won the prize, in December 2018, LarvalBot scientists were ready to start their first seeding trial. The work in the lead-up to the trail was finished: they spent prize money improving and enlarging the floating spawn catchers, then collected hundreds of millions of coral spawn from corals that survived the last two bleaching events and reared them for 5-7 days in enormous floating enclosures on the reef. Then they used LarvalBot to place the baby coral larvae onto damaged areas of the reef, with the hope that the larvae would develop into coral polyps or baby corals. Here’s how it worked: LarvalBot, operating on a command from an iPad, delivered the coral larvae to a specific location by gently pushing it out of the submersible across the intended area of reef, much like spreading fertilizer on a field. (LarvalBot can cover 5,000 square feet [1,500 square meters] per hour. Professor Dunbabin likened the action to “an underwater crop-duster.”) The trial went smoothly. Researchers believe that the coral larvae will grow to be sexually reproductive coral colonies in about three years.

The 2018 LarvalBot mission carried approximately 100,000 coral larvae per trip; the team plans to do a trial of millions of larvae later this year. The process is safe and gentle and does not disturb existing corals. RangerBot was tethered during the 2018 seeding trial, but its performance was so good that it will operate freely and cover a much larger area in future trials, according to Professor Dunbabin. Professors Dunbabin and Harrison see enormous potential for LarvalBot, and they believe it can be operational at other sites across the Great Barrier Reef and other reefs as well. On future missions, they want LarvalBot to release even larger numbers of larvae in a “larval cloud” over wide swaths of damaged reef (not just over target areas). It is a game-changing prospect to be able to seed coral reefs with larvae on a large scale; it could speed up ecosystem restoration and revive damaged reefs after bleaching events up to 100 times faster than previously used methods of coral restoration.

Professor Dunbabin heralds RangerBot as “the only autonomous, affordable, multi-function solution for effectively detecting and addressing threats to coral reefs.” He hopes that it will be utilized by reef researchers and managers worldwide in a wide variety of specialized applications. Its ease of use, small size, and affordability makes it a tool with enormous potential. RangerBot can be used by anyone who is trying to monitor and protect coral reefs, which besides being stunningly beautiful and ecologically rich provide food and livelihood to more than a billion people. The Great Barrier Reef, whose size makes its monitoring and management logistically and financially tricky, is an ideal testing ground for RangerBot.

What’s next for RangerBot? Researchers want to build even bigger spawn-catchers and solar-powered floating larval incubation pools to accommodate and rear greater loads of heat-tolerant, genetically diverse coral larvae to disperse over damaged reefs. Researchers are hopeful that they can help bleached reefs recover within a few years.