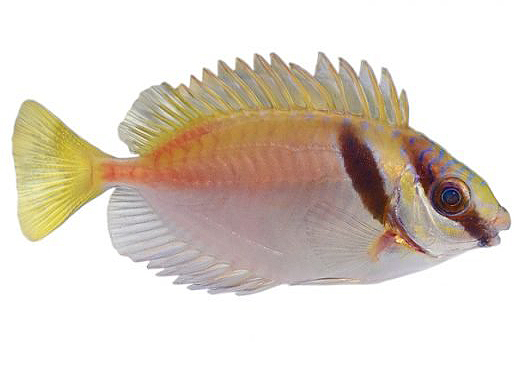 Everyone here at ORA is thrilled to announce the release of the first-ever, captive-bred Two-Barred Rabbitfish (Siganus virgatus)!

This fantastic species is an amazing algae-eating machine for both reef tanks and fish only systems alike. Our fish will eat all types of common fish food pellets, as well as sheets of dried Nori or fresh macroalgae like Ulva.

Visit www.orafarm.com to learn more about this captive-bred species and more.

The Two-Barred Rabbitfish, also known as the Barhead Spinefoot or Doublebar Rabbitfish, is a herbivorous fish with a wide distribution throughout the Indo-Pacific.  They have pearlescent white on their sides, with bright yellow extending along their dorsal edges and caudal fin. Attractive blue striations line across the top of their bodies, becoming more concentrated toward the head. Their two distinct and namesake black bars come down through the eyes and also extend upwards to the dorsal fin from behind the gills.  The fish can rapidly turn off its normal coloration and replace it with a camouflage like blotching, depending on mood or when sleeping. So don’t be alarmed if your beautiful fish suddenly becomes drab in an instant.

Two-Barred Rabbitfish exhibit similar grazing behavior, size and disposition to their cousins the tangs. These fish are amazing at consuming nuisance algae in the home aquarium. They will also readily accept diets formulated for herbivorous fish as well as macroalgae like Ulva and sheets of dried Nori.