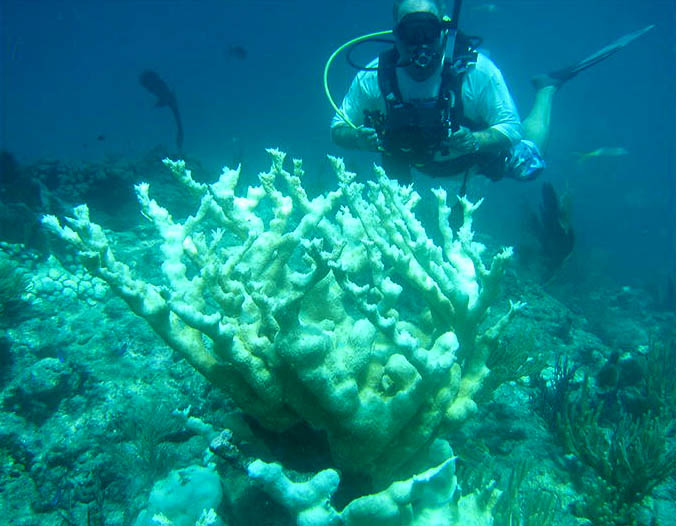 From the study: Coral bleaching in the lower Florida Keys, 2014. Image by Brian Lapointe.

Coral reefs are considered one of the most threatened ecosystems on the planet and are dying at alarming rates around the world. Scientists attribute coral bleaching and ultimately massive coral death to a number of environmental stressors, especially warming water temperatures due to climate change.

A new study published in the international journal Marine Biology reveals what some scientists believe is a major culprit in killing coral reefs. With 30 years of unique data from Looe Key Reef in the lower Florida Keys, researchers from Florida Atlantic University’s Harbor Branch Oceanographic Institute and collaborators have documented that coral bleaching is due not just to a warming planet, but also to a planet that is simultaneously being enriched with reactive nitrogen from multiple sources.

Improperly treated sewage, fertilizers, and topsoil are elevating nitrogen levels, which are causing phosphorus starvation in the corals, which reduces their temperature threshold for bleachin Coral reefs, they say, were dying off long before they were impacted by rising water temperatures. This study represents the longest record of reactive nutrients and algae concentrations for coral reefs anywhere in the world.

“Our results provide compelling evidence that nitrogen loading from the Florida Keys and greater Everglades ecosystem caused by humans, rather than warming temperatures, is the primary driver of coral reef degradation at Looe Key Sanctuary Preservation Area during our long-term study,” said Brian Lapointe, Ph.D., senior author and a research professor at FAU’s Harbor Branch.

A key finding from the study is that land-based nutrient runoff has increased the nitrogen:phosphorus ratio (N:P) in reef algae, which indicates an increasing degree of phosphorus limitation known to cause metabolic stress and eventually starvation in corals. Concentrations of reactive nitrogen are above critical ecosystem threshold levels previously established for the Florida Keys, as are phytoplankton levels for offshore reefs, as evidenced by the presence of macroalgae and other harmful algal blooms caused by excessive levels of nutrients.

Researchers gathered data from 1984 to 2014 and collected seawater samples during wet and dry seasons. Lapointe and collaborators from the University of Georgia and the University of South Florida also monitored the living coral and collected abundant species of seaweed (macroalgae) for tissue nutrient analysis. They monitored seawater salinity, temperature, and nutrient gradients between the Everglades and Looe Key. They wanted to better understand how nitrogen traveled from the Everglades downstream to the coral reefs of the Florida Keys National Marine Sanctuary, which now has the lowest amount of coral cover of any reefs in the wider Caribbean region. 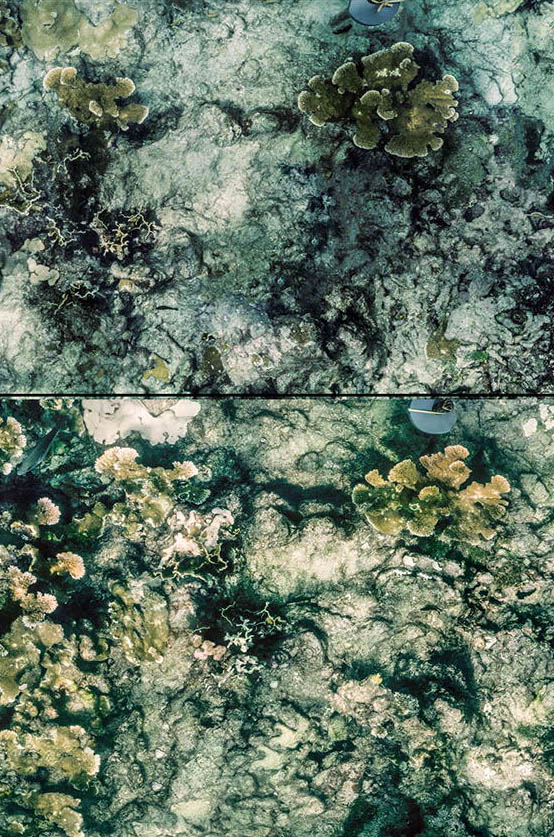 From the paper: A healthy reef in June 1997 (above) and a severely diseased (but unbleached) reef at the same location (Eastern Dry Rocks) in September 1997 (below). A large panoramic version is available in the open-access paper. Image credit: James Porter

Data revealed that living coral cover at Looe Key Sanctuary Preservation Area declined from nearly 33 percent in 1984 to less than 6 percent in 2008. The annual rate of coral loss varied during the study, but it increased from 1985 to 1987 and from 1996 to 1999 following periods of heavy rainfall and increased water deliveries from the Everglades. Between 1991 and 1995, significant increases in Everglades runoff and heavy rainfall resulted in increases of reactive nitrogen and phytoplankton levels at Looe Key above levels known to stress and cause die-off of coral reefs. Despite reduced Everglades flows, the water quality has not yet recovered to the levels of the 1980s.

Nitrogen loading to the coast is predicted to increase by 19 percent globally, simply as a result of changes in rainfall due to climate change, which suggests the need for urgent management actions to prevent further degradation.

“The future success of the Comprehensive Everglades Restoration Plan will rely on recognizing the hydrological and nitrogen linkages between the Everglades, Florida Bay, and the Florida Keys,” said Lapointe. “The good news is that we can do something about the nitrogen problem, such as better sewage treatment, reducing fertilizer inputs, and increasing storage and treatment of stormwater on the Florida mainland.”

The impact of local, land-based nitrogen contributions from sewage treatment plants that service 76,000 year-round residents and an estimated 3.8 million tourists annually is currently being mitigated by the completion of centralized wastewater collection and advanced wastewater treatment plants and nutrient removal facilities throughout the Florida Keys.

According to the Florida Keys National Marine Sanctuary, ocean-related activities associated with coral reefs add more than $8.5 billion annually and have added 70,400 jobs to the local economy in southeast Florida (https://floridakeys.noaa.gov/corals/economy.html).

“The Bonaire coral reefs in the Caribbean Netherlands is a great example of effective nitrogen pollution mitigation. These coral reefs are beginning to recover following the construction of a new sewage treatment plant in 2011, which has significantly reduced nitrogen loading from septic tanks,” said Lapointe.

“Citing climate change as the exclusive cause of coral reef demise worldwide misses the critical point that water quality plays a role, too,” said Porter. “While there is little that communities living near coral reefs can do to stop global warming, there is a lot they can do to reduce nitrogen runoff. Our study shows that the fight to preserve coral reefs requires local, not just global, action.”