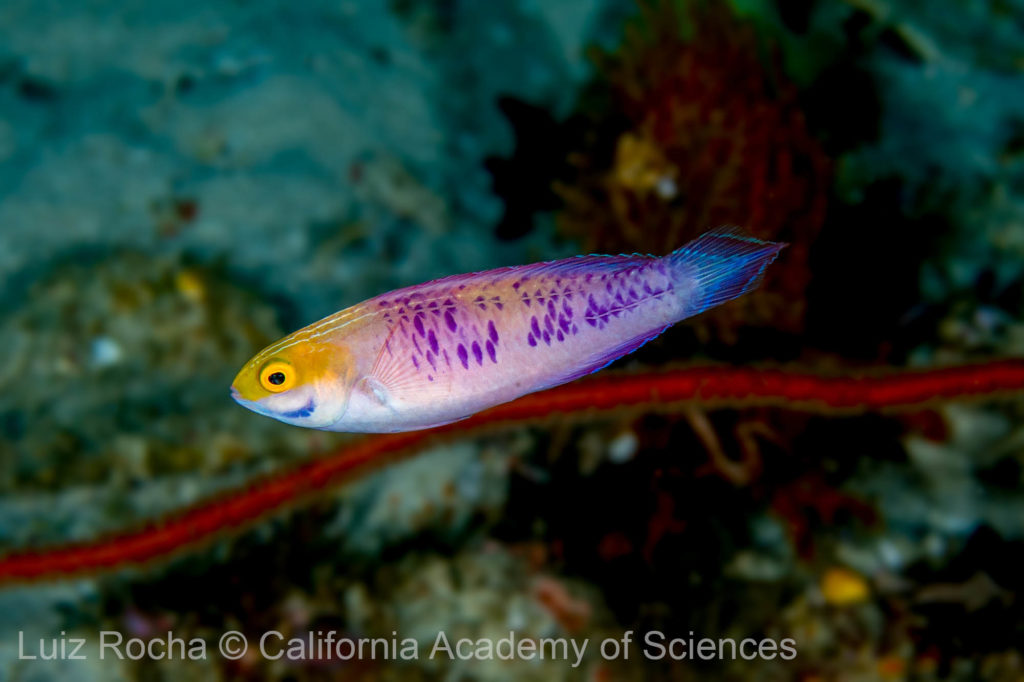 A male of the newly-described Cirrhilabrus wakanda in the wild. Image credit: Luiz Rocha © 2018 California Academy of Sciences

via the California Academy of Sciences

Named for Black Panther’s mythical nation of Wakanda, a dazzling new “Vibranium” Fairy Wrasse enchants with purple scales and a preference for deep, little-known mesophotic reefs up to 260 feet below the surface.

SAN FRANCISCO (July 11, 2019) – Africa has new purple-clad warriors more than 200 feet beneath the ocean’s surface. Deep-diving scientists from the California Academy of Sciences’ Hope for Reefs initiative and the University of Sydney spotted dazzling fairy wrasses—previously unknown to science—in the dimly-lit mesophotic coral reefs of eastern Zanzibar, off the coast of Tanzania. The multicolored wrasses sport deep-purple scales so pigmented they even retain their color when preserved for research. The scientists named this “twilight zone” reef-dweller Cirrhilabrus wakanda (common name “Vibranium Fairy Wrasse”) in honor of the mythical nation of Wakanda from the Marvel Entertainment comics and movie Black Panther. The new fish is described today in ZooKeys.

“When we thought about the secretive and isolated nature of these unexplored African reefs, we knew we had to name this new species after Wakanda,” says Yi-Kai Tea, lead author and ichthyology Ph.D. student from the University of Sydney. “We’ve known about other related fairy wrasses from the Indian Ocean, but always thought there was a missing species along the continent’s eastern edge. When I saw this amazing purple fish, I knew instantly we were dealing with the missing piece of the puzzle.”

The Academy scientists say Cirrhilabrus wakanda’s remote home in mesophotic coral reefs—below recreational diving limits—probably contributed to their long-hidden status in the shadows of the Indian Ocean. Hope for Reefs’ scientific divers are highly trained for the dangerous process of researching in these deep, little-known mesophotic reefs, located 200 to 500 feet beneath the ocean’s surface. Accessing them requires technical equipment and physically intense training well beyond that required for shallow-water diving. The team’s special diving gear (known as closed-circuit rebreathers) includes multiple tanks with custom gas blends and electronic monitoring equipment that allow the divers to explore deep reefs for mere minutes before an hours-long ascent to the surface.

“Preparation for these deep dives is very intense, and our dive gear often weighs more than us,” says Dr. Luiz Rocha, Academy Curator of Fishes and co-leader of the Hope for Reefs initiative. “When we reach these reefs and find unknown species as spectacular as this fairy wrasse, it feels like our hard work is paying off.”

Using a microscope, the team examined the specimens’ scales, fin rays, and body structures. DNA and morphological analyses revealed the new fairy wrasse to be different from the other seven species in the western Indian Ocean and other relatives in the Pacific. The new species’ common name is inspired by the fictional metal vibranium, a rare and, according to Rocha, “totally awesome” substance found in the Black Panther nation of Wakanda. The Vibranium Fairy Wrasse’s purple chain-link scale pattern reminded the scientists of Black Panther’s super-strong suit and the fabric motifs worn by Wakandans in the hit film. 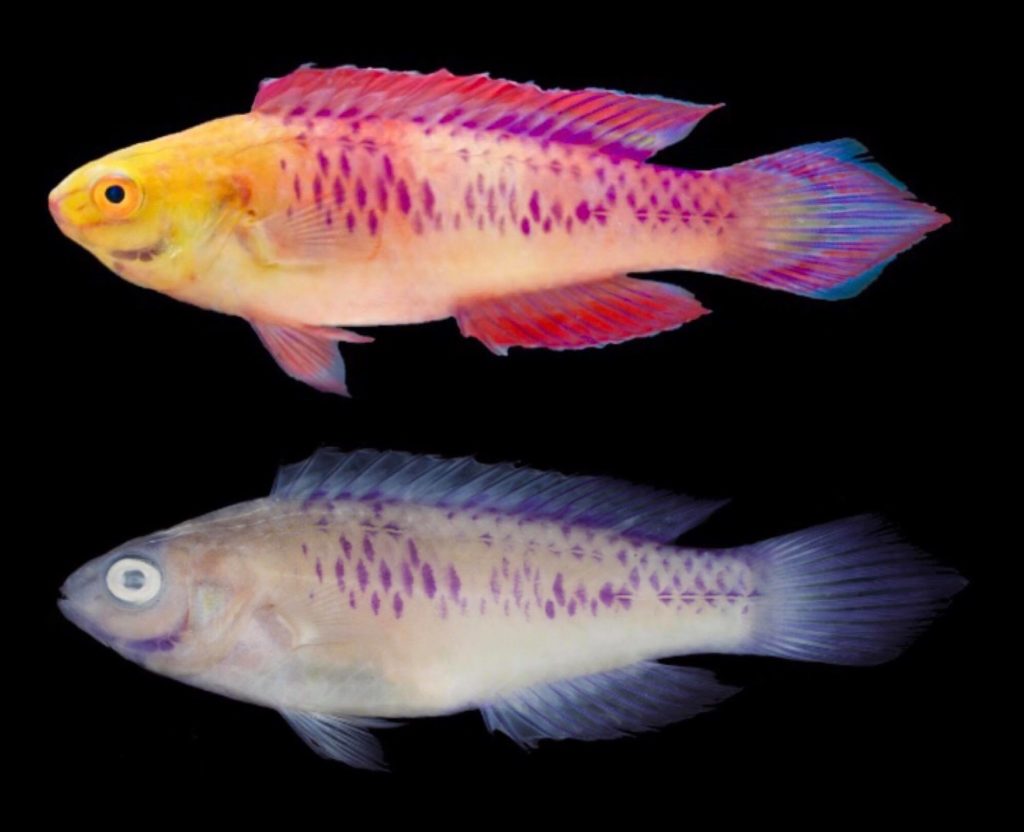 The male holotype for the Vibranium Fairy Wrasse (Cirrhilabrus wakanda), shown freshly euthanized (above) and preserved (below). Image credits: Photograph by H.T. Pinheiro and B. Shepherd (upper) and L.A. Rocha (lower).

In a recent landmark paper, the Academy team found that twilight zone reefs are unique ecosystems bursting with life and are just as vulnerable to human threats as their shallow counterparts. Their findings upended the long-standing assumption that species might avoid human-related stressors on those deeper reefs. The Hope for Reefs team will continue to visit and study twilight zone sites around the world to shed light on these often-overlooked ecosystems. 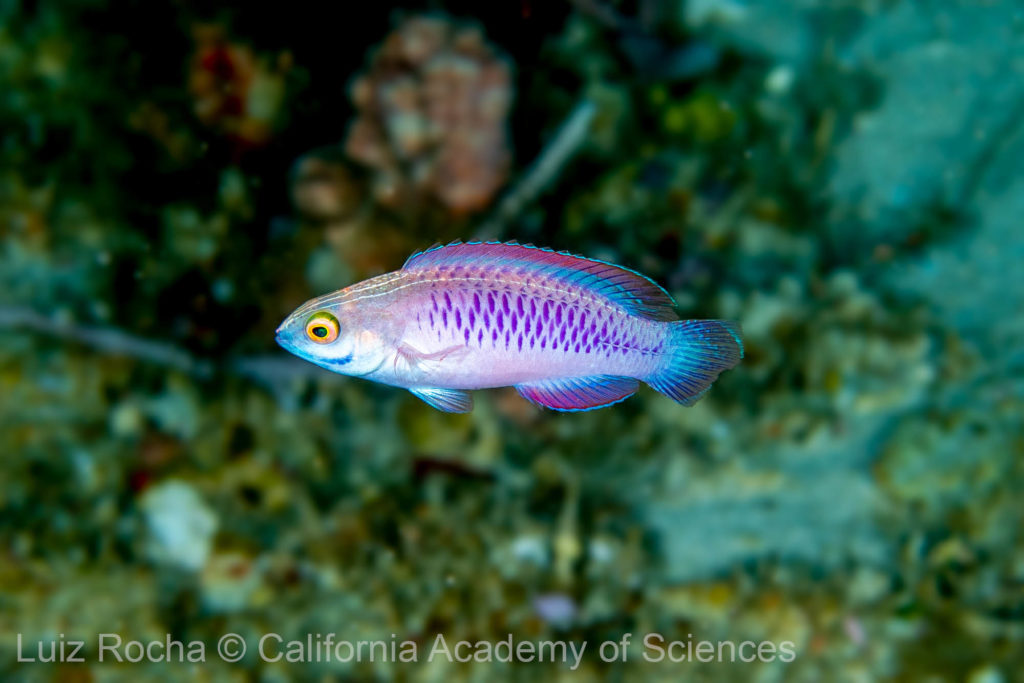 In addition to this new fish from Zanzibar, Rocha and his colleagues recently published descriptions of mesophotic fish from Rapa Nui (Easter Island) and Micronesia. Luzonichthys kiomeamea is an orange, white, and sunny yellow dwarf anthias endemic to Rapa Nui, and the basslet Liopropoma incandescens (another new species published today in ZooKeys) inhabits Pohnpei’s deep reefs—a neon orange and yellow specimen collected from a rocky slope 426 feet beneath the ocean’s surface.

“It’s a time of global crisis for coral reefs, and exploring little-known habitats and the life they support is now more important than ever,” says Rocha. “Because they are out of sight, these deeper reefs are often left out of marine reserves, so we hope our discoveries inspire their protection.” The Academy’s Hope for Reefs initiative is made possible through the support of visionary donors.

The Academy gratefully acknowledges the lead partners listed below.

About research at the California Academy of Sciences

The Institute for Biodiversity Science and Sustainability at the California Academy of Sciences is at the forefront of efforts to understand two of the most important topics of our time: the nature and sustainability of life on Earth. Based in San Francisco, the Institute is home to more than 100 world-class scientists, state-of-the-art facilities, and nearly 46 million scientific specimens from around the world. The Institute also leverages the expertise and efforts of more than 100 international Associates and 450 distinguished Fellows. Through expeditions around the globe, investigations in the lab, and analyses of vast biological data sets, the Institute’s scientists work to understand the evolution and interconnectedness of organisms and ecosystems, the threats they face around the world, and the most effective strategies for sustaining them into the future. Through innovative partnerships and public engagement initiatives, they also guide critical sustainability and conservation decisions worldwide, inspire and mentor the next generation of scientists, and foster responsible stewardship of our planet.