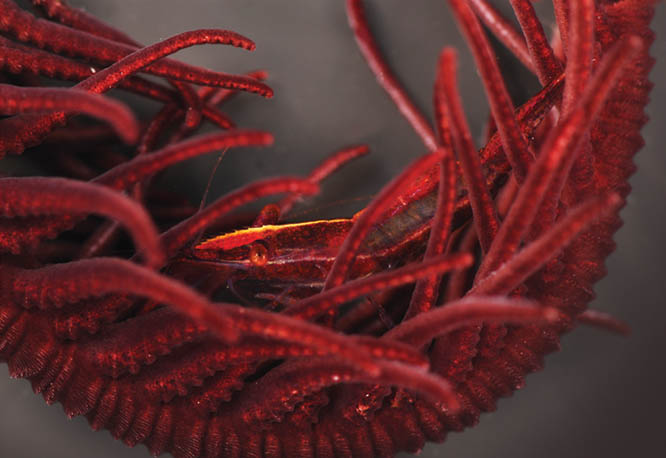 A gold blaze on the rostrum is the only giveaway revealing the presence of the maroon Cristimenes brucei hiding among the arms of a similarly-colored feather star.

Crinoid starfish, often called feather stars, aren’t exactly commonplace aquarium residents, due to their extremely difficult husbandry requirements. They require stable water parameters, the correct flow, and heavy, frequent feedings of suspended particulate foods; nearly all crinoids have perished, even in the hands of exceptionally accomplished aquarists. However, they do still trickle into the aquarium trade on occasion.

While they are interesting on their own, crinoids are also host to a variety of commensal invertebrates; aquarists may be familiar with the squat lobsters (e.g., Allogalathea elegans), which are occasionally offered in the aquarium trade and do not require their host to adapt to aquarium life. Other crinoid commensals could arrive, either intentionally or accidentally, including a number of small shrimp from a few different genera. 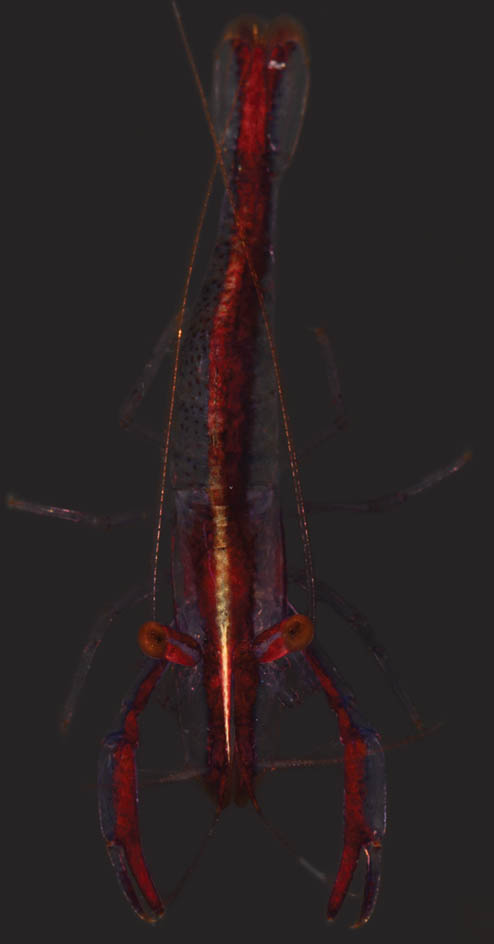 Researchers have discovered and described a new species belonging to the genus Cristimenes, all of which are known to associate with echinoderms. The three previously-known species include C. cristimanus (Bruce, 1965) and C. zanzibaricus (Bruce, 1967), which are found with sea urchins, and C. commensalis (Borradaile, 1915), which has a commensal relationship with crinoid feather stars. The researchers note that all three species have widespread ranges across the tropical regions of the Indo-West Pacific. Some of these species may be more familiar to aquarists and divers under their prior genus name, Periclimenes, which was revised in 2017. All are small and easily overlooked unless one is paying close attention. 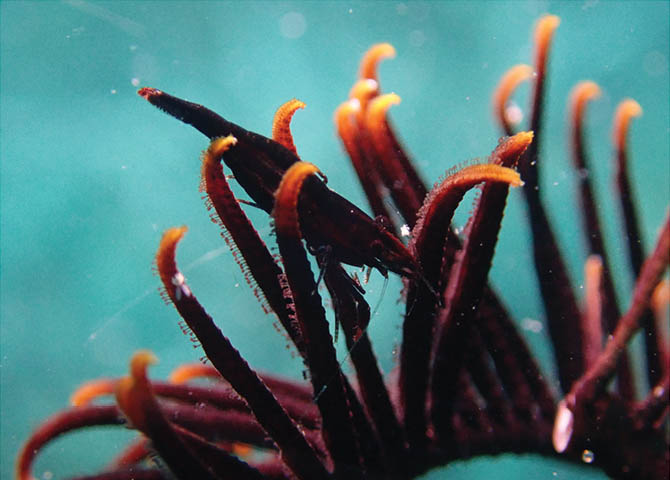 Life in a feather star: a related species, Cristimenes commensalis from Vietnam, makes its home in the feathery arms of a crinoid.

In the open access article “A new species of the genus Cristimenes Ďuriš & Horká, 2017 (Decapoda, Caridea, Palaemonidae),” from researchers Jin-Ho Park, Sammy De Grave, and Won Kim, we learn that this new species has been found in association with the crinoid species Anneissia japonica, A. solaster, and Catoptometra rubroflava at a depth of 15-27 m (approximately 50-90 feet) in Korean waters; specimens from Hong Kong were found in association with the crinoid Tropiometra afra. It’s important to note that the body color of this new shrimp can range from orange to reddish-brown, “adapted to the colour of the host crinoids.”

It’s unlikely that most casual aquarists will ever encounter shrimps from the genus Cristimenes, but it’s certainly not impossible. Since there are not many aquarium life exports out of Korea and Hong Kong, it’s far more likely that aquarists would acquire the related C. commensalis as an oddball hitchhiker, perhaps arriving with its host crinoid but potentially on its own, either intentionally or in an assortment of small ornamental shrimps. 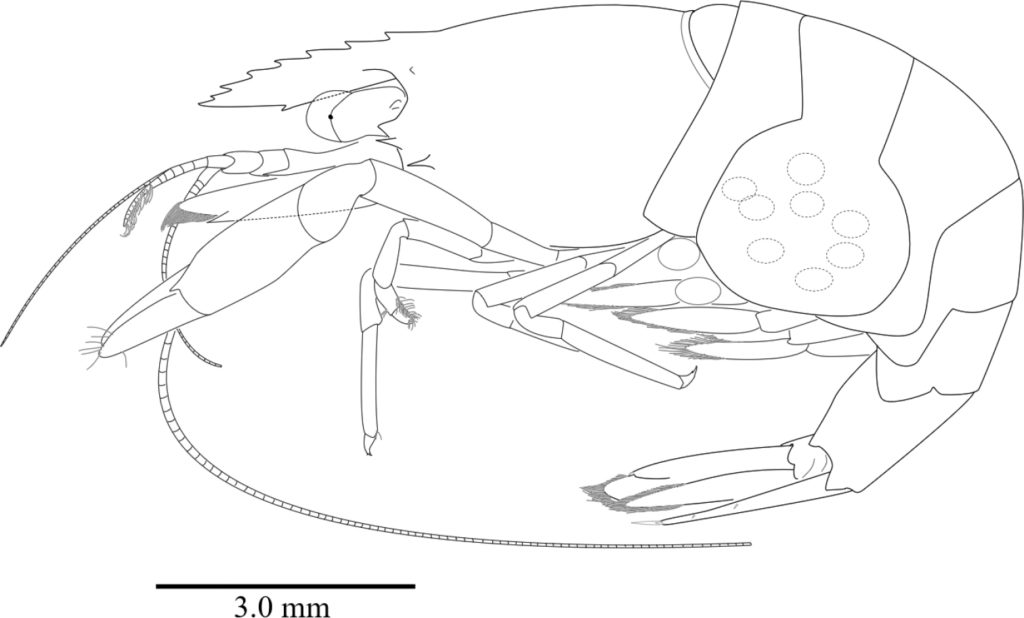 Inferring from the schematic above, Cristimenes brucei isn’t large; the individual above appears to be approximately 16 mm from the tip of the rostrum to the end of the uropoda (tail fan). Given their presumed small size (0.5-0.75 inches), Cristimenes might be of interest to pico reef aquarists should they ever come across one. Their husbandry is an unknown, but potentially these shrimps could do well without their crinoid host, and might not be too dissimilar from the very popular freshwater cherry and Amano shrimps that are all the rage in freshwater aquaria.

Check out the full species description for Cristimenes brucei, available freely as an open access journal article from ZooKeys.