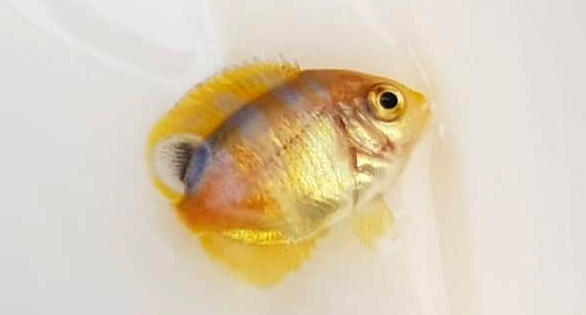 Wen-Ping Su of Bali Aquarich (Bali, Indonesia) saw fit to close out May 2019 by revealing yet another in a seemingly endless stream of groundbreaking marine fish aquaculture firsts. Shared as a bit of a guessing game for his friends and followers, Su’s clues included much of their history working with an iconic and often humbling marine angelfish.

Via translation and edited for clarity, Su asked, “Who am I? This is a very hard-to-do fish. It eats some pretty special food. Most people find it difficult to keep this fish; it’s often difficult just to get the fish to feed. We spawned this species before, years ago, but it was difficult to produce larvae….and the price of this fish, when harvested from the wild, is super-cheap. So we temporarily gave up attempting to breed this species. This time I tried it in our new system.”

Clearly, the “new system” at Bali Aquarich has borne fruit, in the form of the world’s first captive-bred Regal Angelfishes, Pygoplites diacanthus! Su privately noted that parents of these amazing babies represent the local Indonesian form of the species. 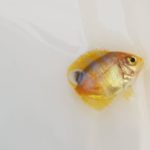 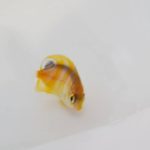 Phrases like “game-changing” tend to lose their meaning over time, striking people as simple hyperbole. But truly, if you ever aspired to keep a Regal Angelfish in your home aquarium, this accomplishment could be a sea change for the species, and could make all the difference between your success or failure. 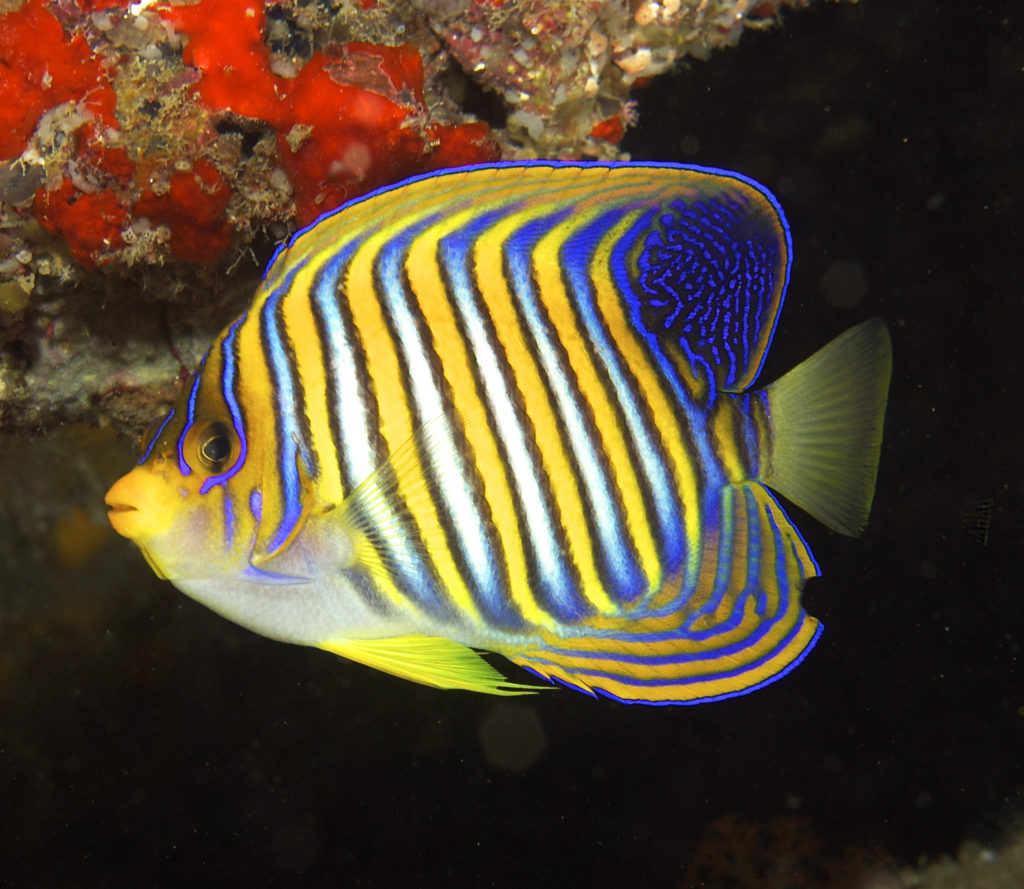 The Regal Angelfish, Pygoplites diacanthus, is highly prized but also widely regarded as a shy and very difficult angelfish to keep. Historically, specimens from the Red Sea, with their yellow breasts and more vibrant coloration, cost considerably more than their gray-breasted counterparts (which are most often available from Indonesian supply chain). This price disparity is, in part, due to simple logistics, but it’s also generally believed that Red Sea specimens are superior and offer a better chance at successful husbandry in captivity. Whether this “success factor” is somehow inherent to the fish themselves or due to disparities in capture and care methods depending on where they are sourced, it is certainly open for debate and should be investigated. That said, Kevin Kohen of LiveAquaria notes that in addition to Red Sea specimens, individuals collected from the “Maldives, Coral Sea, Fiji, and Tahiti are good shippers and are harvested and handled with care, and normally will adapt more easily than their Indo-Pacific counterparts.” 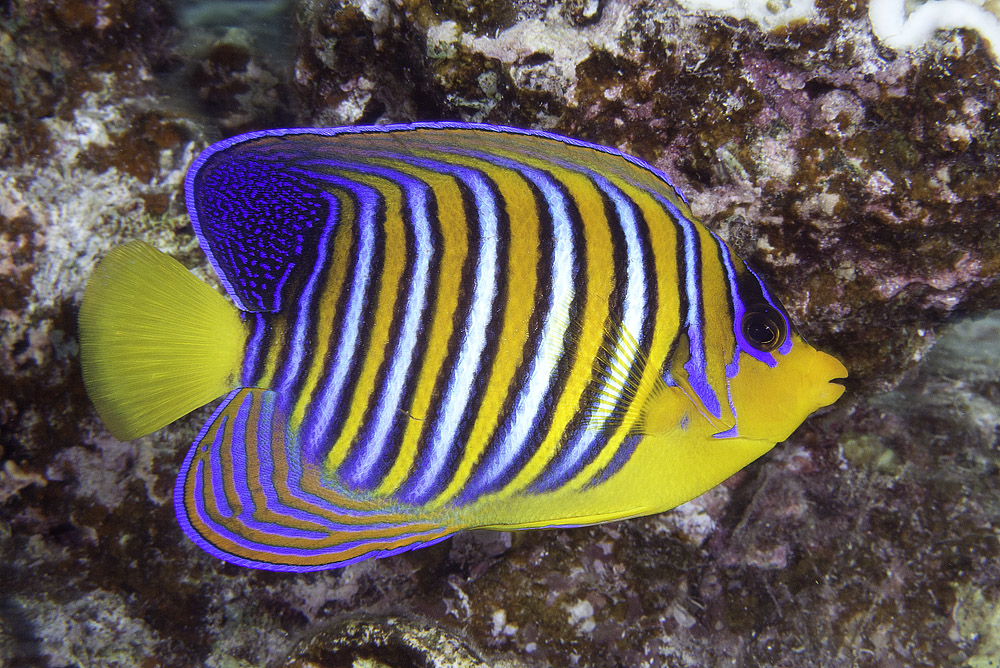 But beyond their general rumored “sensitive” nature, the number-one cited difficulty with keeping Regal Angels is their diet, which is widely regarded as comprised mainly of sponges and tunicates, and a general difficulty in getting them to eat anything at all in captivity. As a result of these husbandry issues, it’s common practice to suggest seeking out fishes that aren’t too large (and too set in their ways) or those that are tiny juveniles (which lack the reserves that might be required to successfully transition onto a captive diet). Of course, as the decades have passed, aquarium fish food manufacturers have provided angelfish keepers with many commercially-prepared diets that include sponge material as a component of the offering in an effort to entice and properly maintain these challenging fishes in captivity. It is certainly possible to have success with a Regal Angelfish in captivity, but the conventional wisdom suggests they are difficult, or even expert-only fishes, which means “stay away” for the vast majority of aquarists.

If there’s one thing we can typically say about captive breeding, it’s that offspring hatched and reared in captive conditions are nearly always superior to their wild-caught counterparts in terms of husbandry requirements. Now, being captive-bred won’t suddenly make, for example, a Mandarin Dragonet (Synchiropus splendidus) suddenly willing to snatch flake food floating in the water column—it’s still going to be a slow, methodical bottom picker. But being captive-bred will, perhaps suddenly, mean that small juvenile Regal Angelfish might be available with bold personalities and aggressive appetites and willing to consume easy-to-feed aquarium diets (like pellet foods).

It’s at this point that the reader needs to once again “do the math.” A “quality” wild-caught Regal Angelfish may easily retail for $300-500 depending on the source and size, while tiny juveniles from less reliable sources are sometimes offered for as little as $100 as wild-caught specimens. It’s entirely premature to speculate where retail prices could wind up for a captive-bred Regal Angelfish; they are in part going to be determined by whether the fish can be reared in quantity, and what it actually costs to make one. But how many wild-caught fish should an aquarist be willing to gamble on, and how many are acceptable to lose along the way if a more expensive “sure thing” is being offered via aquaculture?

It’s undeniable that historically, being “price competitive” with a wild-caught version is a very important aspect of predicting the commercial success of a captive-bred marine fish species. However, this reality must be based, in part, on a lack of information (and, frankly, shopping more on price than quality). It’s largely up to aquarists like yourself to understand that a captive-bred Regal Angelfish is likely going to be a completely different proposition than a wild one. I could say it’s “apples to oranges,” but in reality, it’s more like getting organic, grass-fed beef raised by artisanal ranchers vs. feed-lot-grown, discolored ground beef that’s “reduced for quick sale” with less than 24 hours left on the sell-by date!