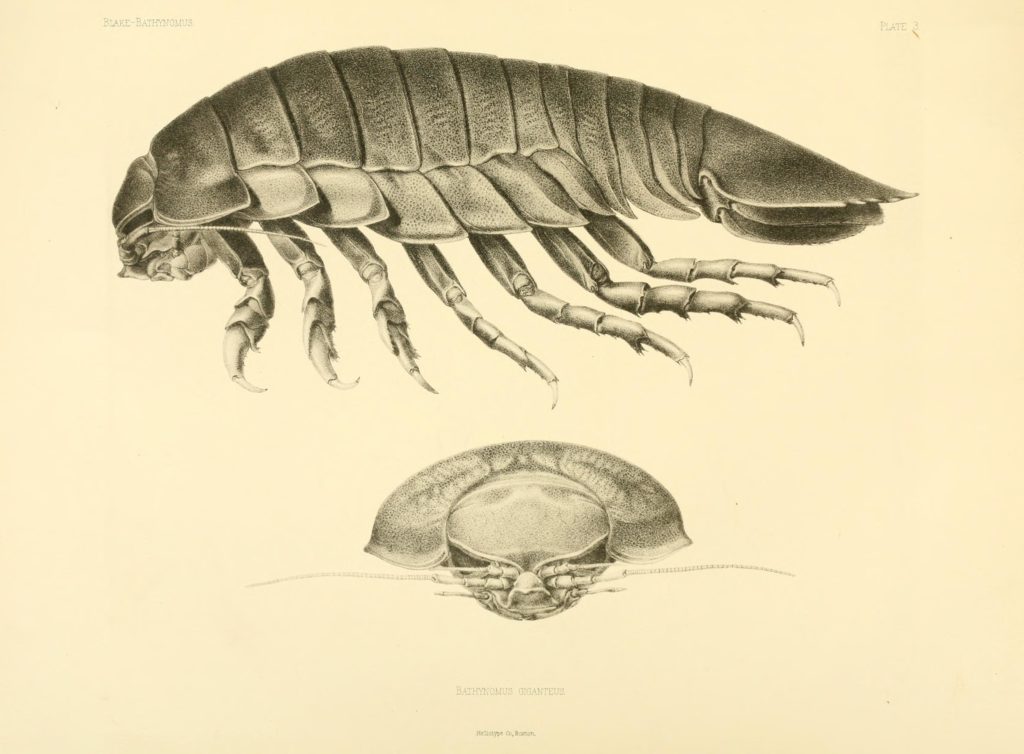 In a younger world, being a professional invertebrate zoologist, I wanted to learn about the variety of critters hitchhiking into our reef tanks. As a result, for about 10 years, I had online columns where I regularly answered hobbyist questions concerning any strange critters appearing in their aquariums. Based on those questions, it was obvious hobbyists were finding many isopod hitchhikers from a lot of different isopod groups.  This diversity took me somewhat by surprise.  I expected aquarists would find a lot of isopods, but I did not anticipate the wide diversity that was found.

Many isopod hitchhikers are free-living, harmless or even beneficial to their reef-tank neighbors, similar to their distant cousins, the amphipods. Unlike amphipods, however, a few of the isopod hitchhikers had the potential to be disastrous if they were not removed from a reef aquarium very soon after their arrival.  These isopods are from taxonomic groups containing many species of scavengers, but also some impressive predators and fairly nasty parasites.  I need to point out, as well, that most scavengers are also predators as well as vice versa.

Isopods Are Easy To Identify

Fortunately, dangerous isopods are easy to distinguish.  They have characters that set them apart from other crustaceans.  First, all free-living isopods are unique in being quite flattened from top to bottom. Virtually no other crustaceans, except a few crabs, are as flat as isopods, and the isopods are very obviously not crabs. Additionally, isopods lack a carapace, the shell-like extension covering the head and thoracic regions of shrimp and crabs.

Isopod bodies have three major regions: the head, the thorax, and the abdomen. Even so, the animals may lack obvious distinctions between those body regions. Sometimes, only by examining the animals’ undersides are the regions clearly evident.  However, the narrow “walking-leg” appendages of the middle body region or the thorax, are always quite similar, giving the animals their group name of Isopoda from the roots׃ iso (= alike) + podus (= foot). 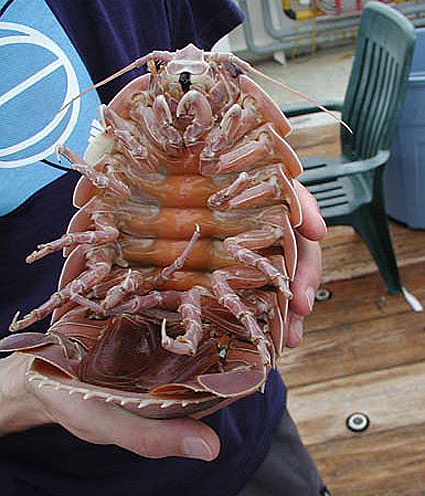 Underside of male Giant Isopod brought up from the depths by a remote vehicle. This species can reach lengths of 30 inches (76 cm). NOAA/OER image.

Finally, though, one confounding factor exists, mature females have large flat plates developed from the first leg segment of these thoracic appendages, extending under the animal toward the midline and overlapping a bit with plates from the other side. These overlapping plates form a protective volume between the bottom of the thorax and these plates where developing embryos are carried until their release.

Consequently, having the combination of any of a few of the characters of׃ being crustacean, flat, without a carapace, with three body regions, with five to seven thin, walking legs under the middle body region means an unknown animal has a very good chance of being a predator or scavenger isopod.  Of course, if it is chewing on a fish, that is also a dead (… for the fish) giveaway, as well.

A generalized isopod’s external anatomy is relatively simple, but as is often the case with marine invertebrates, such a simple plan is often a good basis for the evolution of a large number of living species, many of which seem to have anatomy that bears little resemblance to the basic plan. Over 5000 isopod species are presently known, and they are found in every available habitat. Indeed, isopods are one of the few crustacean groups to have become successful in terrestrial environments as well as marine and freshwater ones. Many aquarists may recognize them as the terrestrial “pill bugs” or “rolly-pollies.” Nonetheless, most isopods are marine creatures, and reef aquarists sometimes see a relatively wide array of their types. However, most isopods are small animals and often hard-to-see and, consequently, many of the odd types are often overlooked in a tank.

On the other hand, often to their dismay, aquarists often discover larger predatory isopods attached to and consuming flesh or sucking the blood from a fish. These isopods must be dealt with immediately, if not sooner, as they can seriously harm the fishes—by consuming them—and then, sometimes the predator finds other, more desirable, prey animals.  Several aquarists have told me how they watched isopods leave a fish in their tanks only to swim over and land on the aquarist’s bare skin, get a good grip, and then cut their way into the aquarist.  All this happens fast enough that the astonished aquarist just reacts by startling observations.   Yummy food…and not the first time I have known of isopods sampling pink apes as a food source.

In the long distant past, about 30 years ago, while teaching a course in marine invertebrate zoology at a field station, some of my students and I were on a boat sampling bottom substrates to examine and collect animals for their class. A dredge or grab would take a bottom substrate sample, which would be brought up to a sorting table on the boat’s deck where the students and I would then paw through it and see what kind of critters were present. We would grab animals and put them in buckets to take back to the instructional lab for detailed examination.

I encouraged the students to try to identify what animals they were collecting from the samples, as this helped them remember the many types of invertebrates we would see on one collecting trip. Often students would ask what “this” or “that” critter they found was prior to putting it into a bucket. The students were generally quite polite and asked questions in turn. Sometimes, that was a mistake.

One student had grabbed and was holding in her clenched fist a common 1.5-inch long Aegid isopod (Aega belliceps, see image below). Apparently, while she was awaiting her turn, the bug had gotten comfortable and had snuggled down in her palm, hooking its long dactyls (toe claws) into the creases in her paw, then it tasted her skin and determined was a vertebrate (= food). About the time she was ready to ask her question, the bug used its mandibles to razor slice through the flesh of her palm, immediately digging all the way down into the underlying muscle, whereupon it started to dine—on HER. Her vocal response was rather impressive! My ears still ring with the memory of the shrill tone of her screams…and I also discovered several new words, as well as new combinations of words, all of which were “colorfully descriptive.” 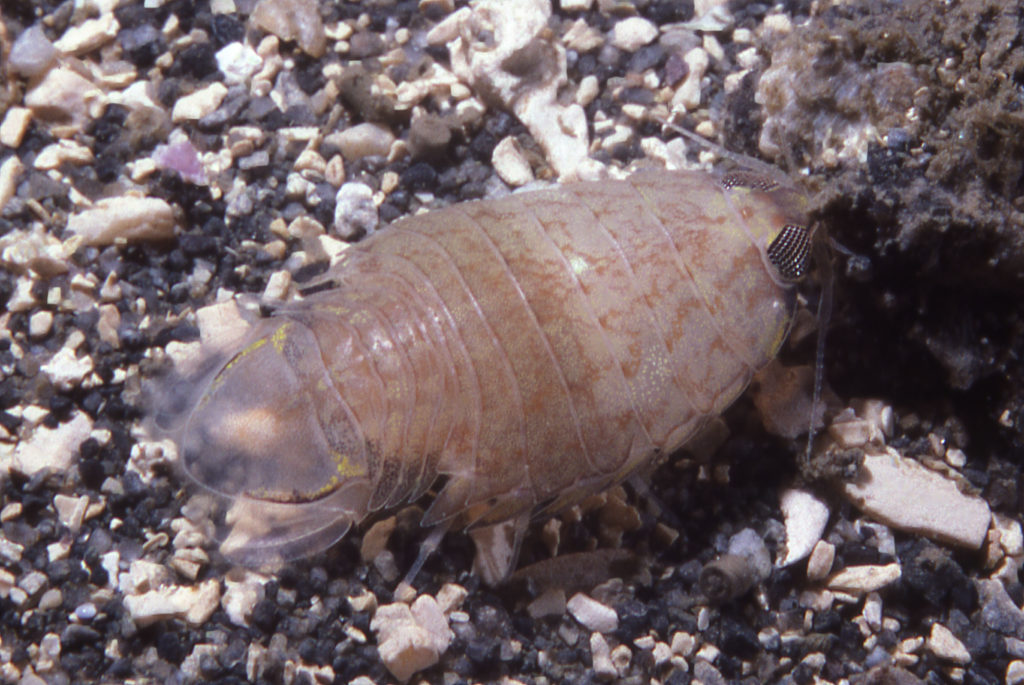 Such was the tenacity of the isopod, it was HARD to remove without damaging it, and I really didn’t want to harm it. I thought that a bug with that amount of initiative deserved to live. I finally got the animal free and although the student was politely screaming at me to kill it, I released it over the side of the boat, whereupon it swam straight down toward the bottom. These critters may live a long time—estimates of a couple of decades as a life-span are not uncommon—and I have often wondered if it still was around in that region, telling isopodish tales to unbelieving isopod juveniles about the strange creatures that lived above the sky.

The Isopoda is a huge and diverse assemblage including many parasitic and terrestrial forms, as well as an amazing diversity of free-living marine species. Although most are minute, some very large isopods are found in the deep ocean. The largest isopods that have been collected are Bathynomus giganteus, scavengers which are commonly found in deep water in the Gulf of Mexico, but this species has also been collected in most other seas. Other species of Bathynomus are known as well. Individuals well over 30 cm (over 1 ft) long are routinely collected from the Gulf of Mexico with the largest being 50.5 (about 18 inches) cm., and rumors persist of sightings of animals over 1 m in length.

Here are a couple of nice— very neat—videos of living B. giganteus.  The first was done by NOAA and the other is linked under the image below by the Louisiana Universities Marine Consortium.

And your take-home bonus for looking at this blog is a link to a recent blog by Dr. Craig McClain, the primary editor/author of the award-winning blog, “Deep-Sea News”. Why is this a bonus for you? Because it contains a link to a bunch of (a flock of ??) B. giganteus feeding on an experimental alligator fall on the bottom in the Gulf of Mexico, as well as a good explanation of why this is really good science. All credit for that study goes to LOUISIANA UNIVERSITIES MARINE CONSORTIUM, and here is another link to Atlas Obscura discussing this project. But – REALLY, folks, when was the last time you had the opportunity to watch a video of football-sized isopods eating a dead gator…or a dead anything?