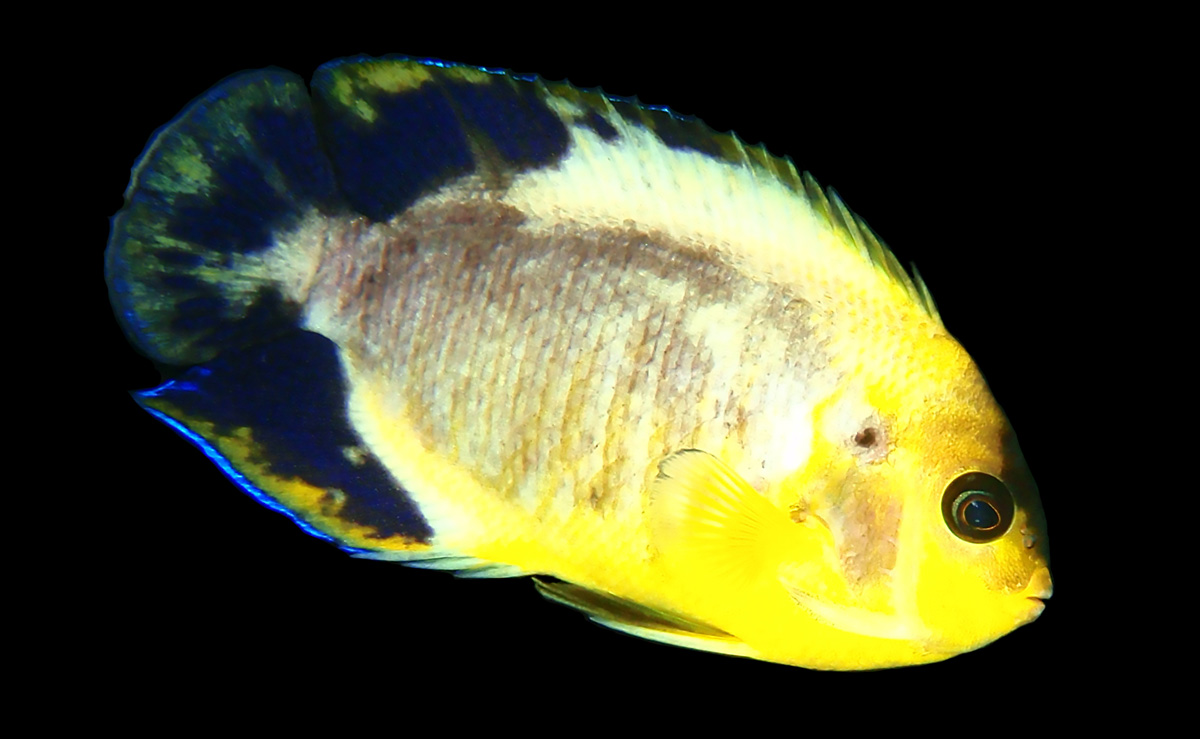 Dubbed “Koi” by the aquarium trade and hobby, aberrant tangs and angelfish that display mottled, patchy coloration that heavily deviates from the norm command attention. They remain a relative rarity, only occasionally encountered and collected for the aquarium trade. These fish are infrequently seen in the wild, and to this day, no one knows what is responsible for these unique variations in patterning. That hasn’t prevented people from speculating.

One Or More Hypotheses Could Be Correct

Rare fish guru Yi-Kai Tea has noted that the koi-type aberrations can even occur in other fishes besides tangs and angels, while Jane Hallam, a PhD candidate in Environmental Science at UCL in London, took a deep dive into the phenomenon of aberrant coloration in Centropyge and hypothesized that the cause could be dietary. Hallam also considers cases of genetic piebalding or an affliction akin to vitiligo in humans, and goes on to briefly discuss that these aberrant Centropyge could be the equivalent of supermales, donning spawning dress during a season and later returning to normal coloration.

Earlier this year, CORAL Magazine shared the observations of Dr. Dieter Brockmann about several “Koi” Scopas Tangs in the Maldives. While reiterating some of the aforementioned hypotheses, he also mentions the possibility of fungal disease as a causative agent. The most likely culprit, in Brockmann’s opinion, is the interesting possibility of oligomelany, a genetic condition which has outwardly similar manifestations known primarily in freshwater fishes.

Given the variety of fishes afflicted, and the wide array of unique color mutations being seen, it could well be that there are multiple causes, with it being different in different species or groups of fish. 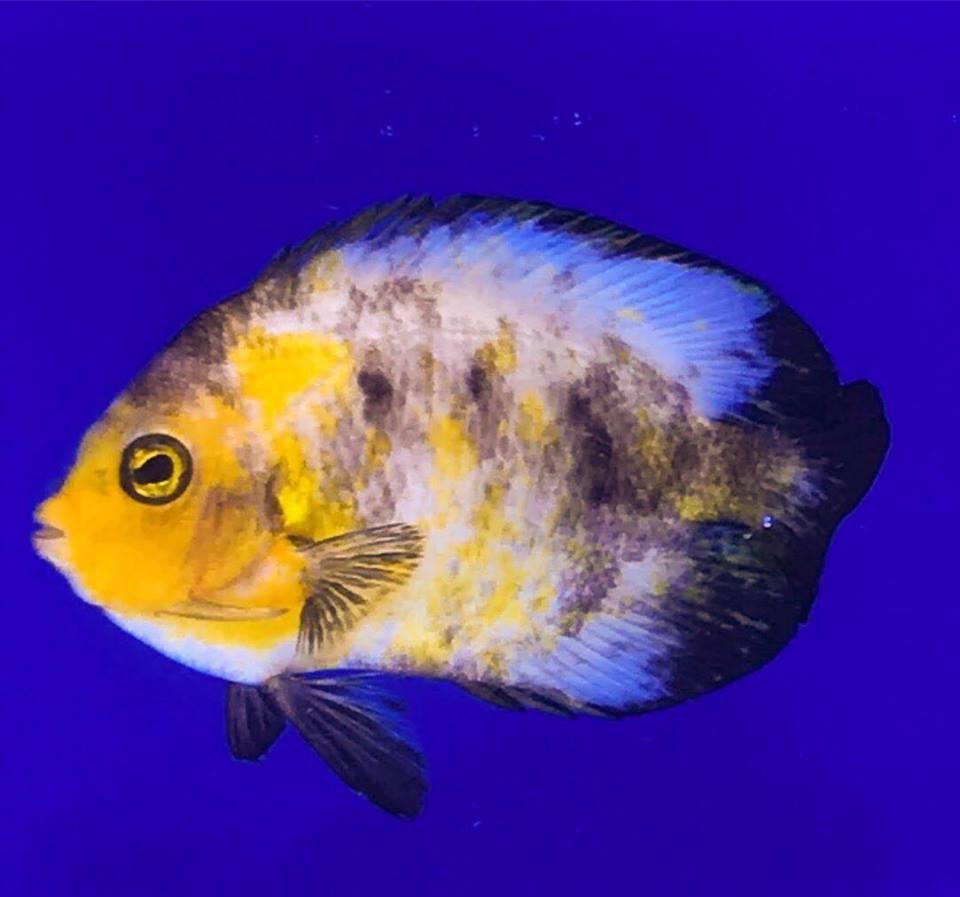 Another one-of-a-kind Koi Centropyge that presented a bit of a mystery at the time. Image courtesy ACI Aquaculture

About 10 months ago, Joe Rowlett shared the interesting story of a Koi Centropyge angelfish that had been obtained by ACI Aquaculture on Reefs.com (the specimen pictured above). Part of the difficulty when dealing with fishes like these is that their true identity may be obscured by the aberrant coloration. ACI’s fish, which was shipped from Jakarta, was outwardly similar to the fish we are featuring today. 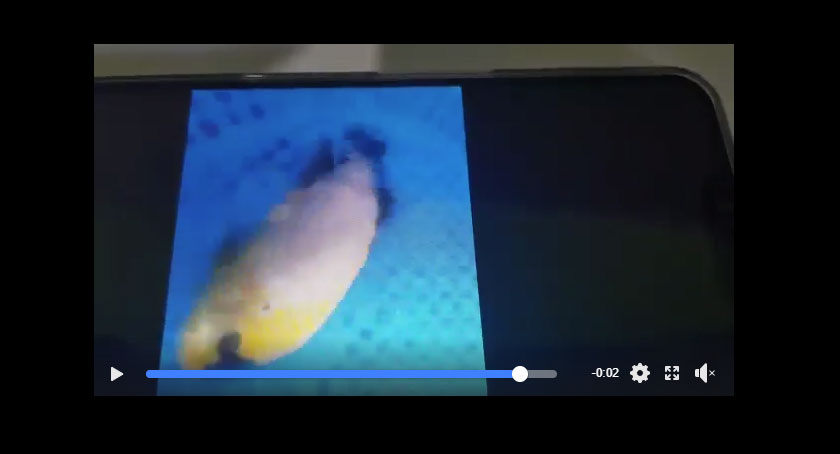 Screenshot from a video taken of the original video, depicting the fish halfway around the globe. 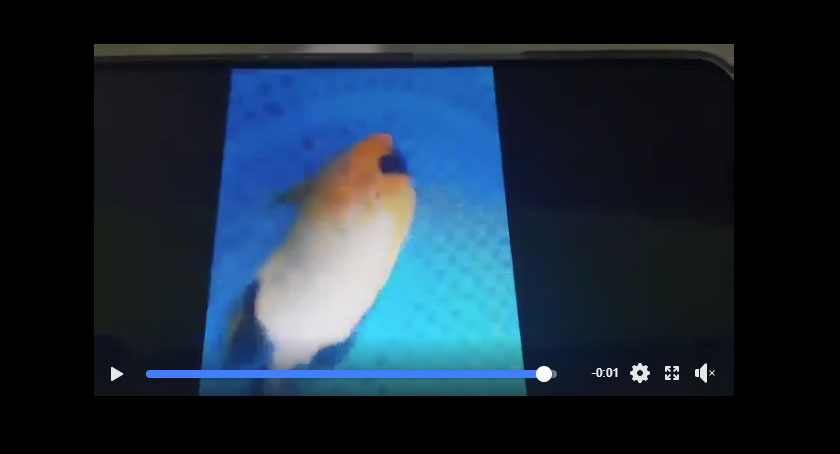 Another look at this aberrant Centropyge that was being marketed.

Carolina Aquatics founder and president Kris Cline circulated the offering among a group of confidants and ultimately made the call: the fish would be brought into the country. This is how the fish appeared after a few days of settling in. 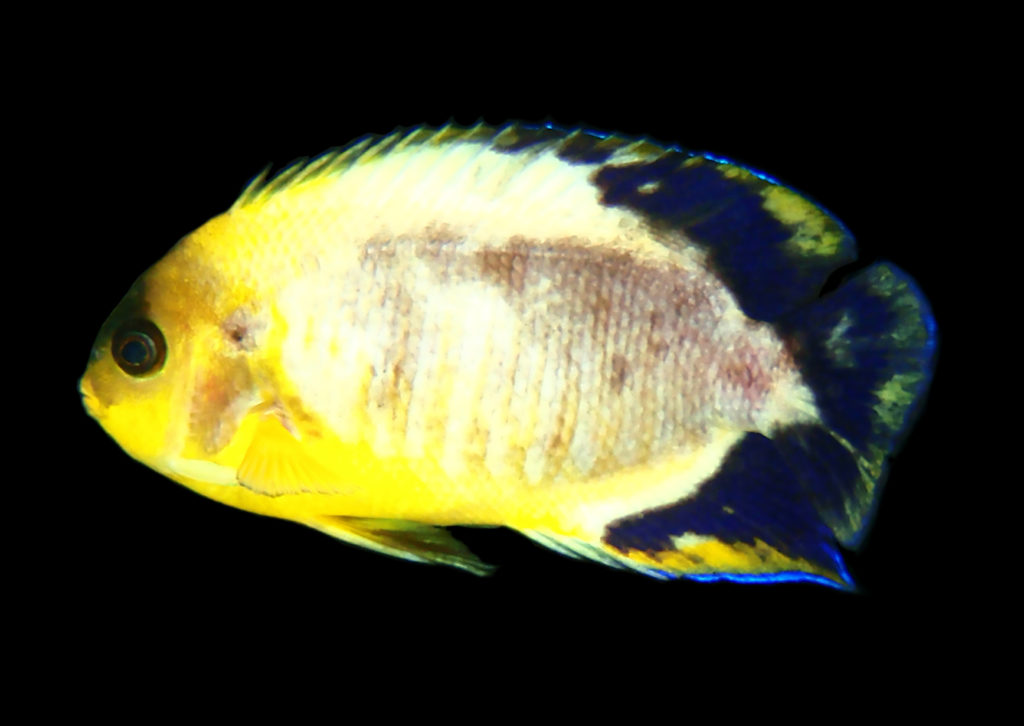 It took a little sleuthing to figure out what this fish likely is. It originated from Sri Lanka, which helps narrow down the species identity primarily to species found there. Reviewing the list of candidates, one subtle clue revealed the likely answer. Can you figure it out? 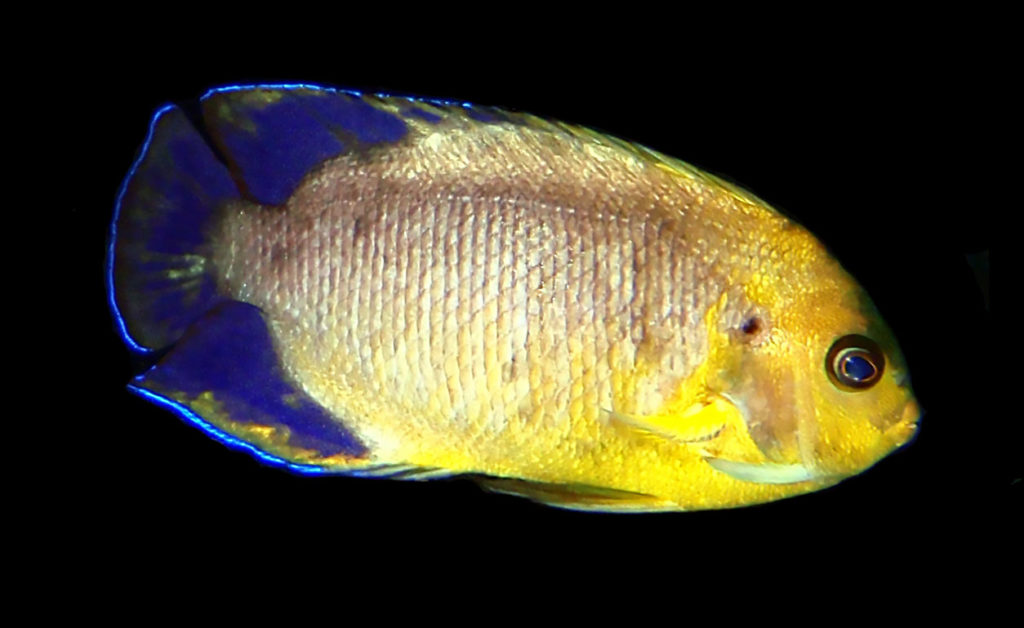 The most recent image of this one-of-a-kind Centropyge suggests it is starting to darken up and change coloration a bit. Image credit: Kris Cline/Carolina Aquatics

Consulting with Yi-Kai Tea was instrumental in potentially solving the riddle. The critical detail can be found in the coloration of the pectoral fins; they’re solidly yellow, a trait unique to only one species found in Sri Lanka. With reasonable certainty, the tentative species ID is that this fish is a Koi variant of the Yellowfin Angelfish, Centropyge flavipectoralis, which is mainly navy blue with bright yellow pectoral fins. But we could all be wrong, or we might never know!

As mysterious as the cause of the aberration itself, whether a Koi-type variant will remain that way in captivity is a virtual unknown. Some fish rapidly change their colors or even fully revert to the normal coloration for the species, while others change slowly, always morphing into something different. The gamble, and what everyone is hoping for, is to enjoy this unique variation for as long as possible.

Speaking with Chris Meckley of ACI Aquaculture, I checked in to see how their mystery Koi Angelfish had fared. As noted in the article at the time, there were a couple of strong contenders, but one, in particular, rose to the top after ongoing discussions. Having special-ordered it for a customer who knew the risks, Meckley was able to keep in touch with the aquarist who received it. In a quick interview last week, Meckley revealed the mystery. “The customer sent me a video four months later. It was a Midnight Anglefish [Centropyge nox], exactly what we thought it was.”

Indeed, the fish’s coloration had changed enough to reveal its true nature.

At best, only a handful of similar aberrant Centropyge like this have been seen in the aquarium trade. This unusual Koi Yellowfin Angelfish is currently available, wholesale to the trade, at Carolina Aquatics (you can have your favorite local fish shop special order it for you). Being a one-of-a-kind offering, there’s no standard market price for aberrant fish like these; every case is unique and hinges entirely on aesthetics and what people are willing to pay, and retailers will make the final determination. While Carolina’s wholesale asking price is not public information, it’s safe to say fish like these can retail anywhere from $1200 to $2500, and that this individual will probably fall into the lower half of that range.

Whether it will stay the same, change a lot, or even fully revert over the coming months is a complete unknown. But for the rare fish collector, this arguably intriguing aberrant koi dwarf angelfish is a chance to enjoy a very unique fish with an interesting story to tell—a story that has yet to unfold.