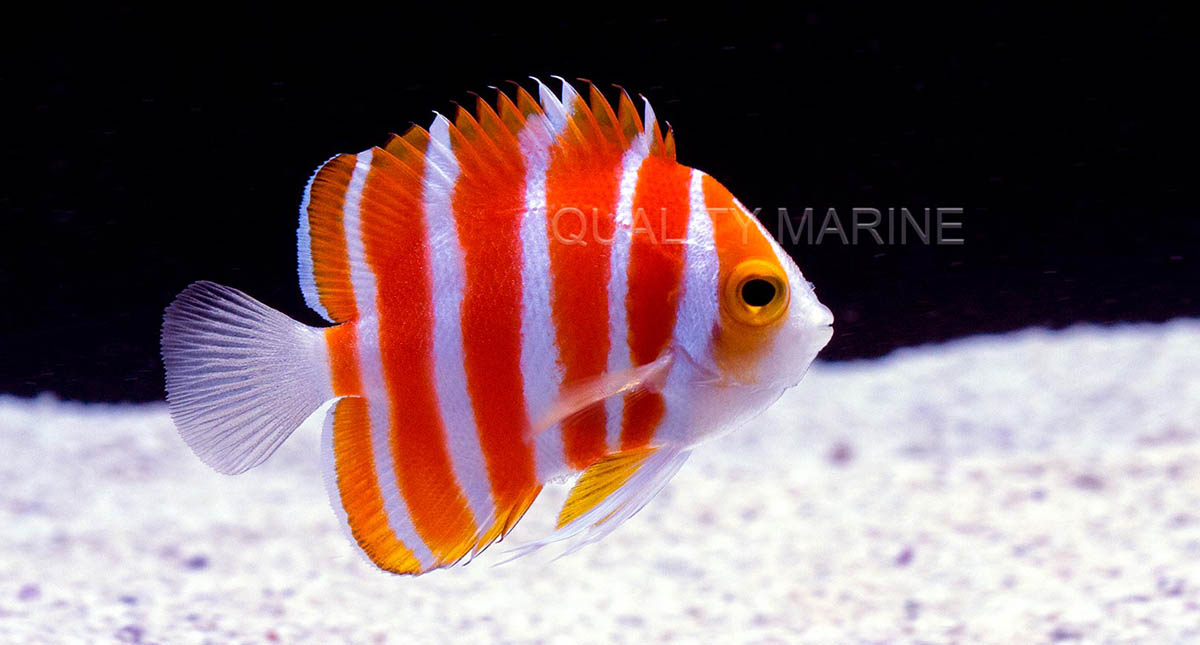 Quality Marine has imported some exciting and important species of marine fish from its longtime partner in the Cook Islands. Our Cook Island partners supply Quality Marine with an extensive list of rare and beautiful species, and they are a model for their commitment to sustainable collection. 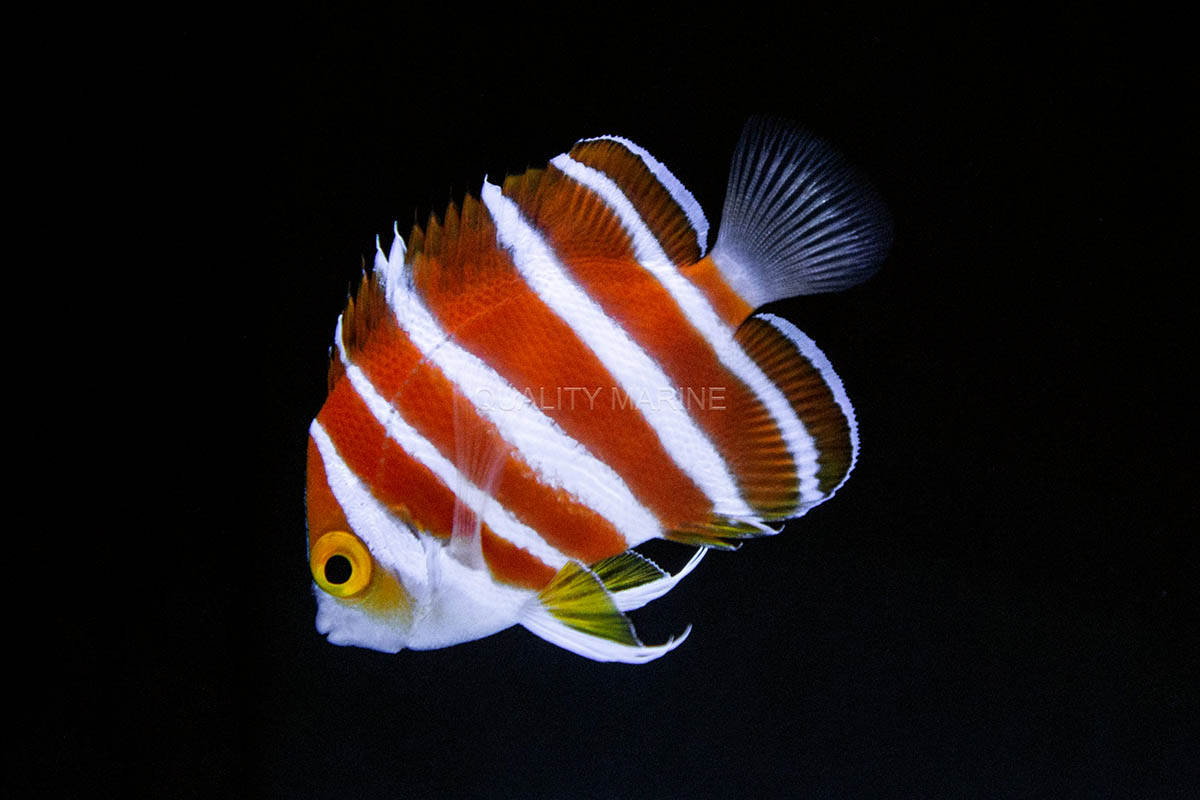 Another look at the rarely encountered Peppermint Angelfish, which is so coveted that if you have to ask how much, you probably can’t afford it. Image credit: Nick Neumann at Quality Marine.

Of particular interest was the importation of a Peppermint Angelfish (Paracentropyge boylei), an extremely rare, beautiful deep-water angel. This scarlet red and white angel is found in the deep waters of the South Pacific. The P. boylei is one of the hobby’s rarest fish and has been collected very infrequently. In the wild, the Peppermint Angel is found on ledges, in caves, and around rubble areas of steep reefs down to about 120 meters deep. The P. boylei should be housed in a dimly-lit, large aquarium with plenty of ledges and cave-like structures that mimic its natural habitat. Paracentropyge species are known to be finicky eaters, so the Peppermint Angel should be fed a varied diet of small thawed marine-based meaty foods and live sponges. Over time the species can be acclimated to higher light conditions. 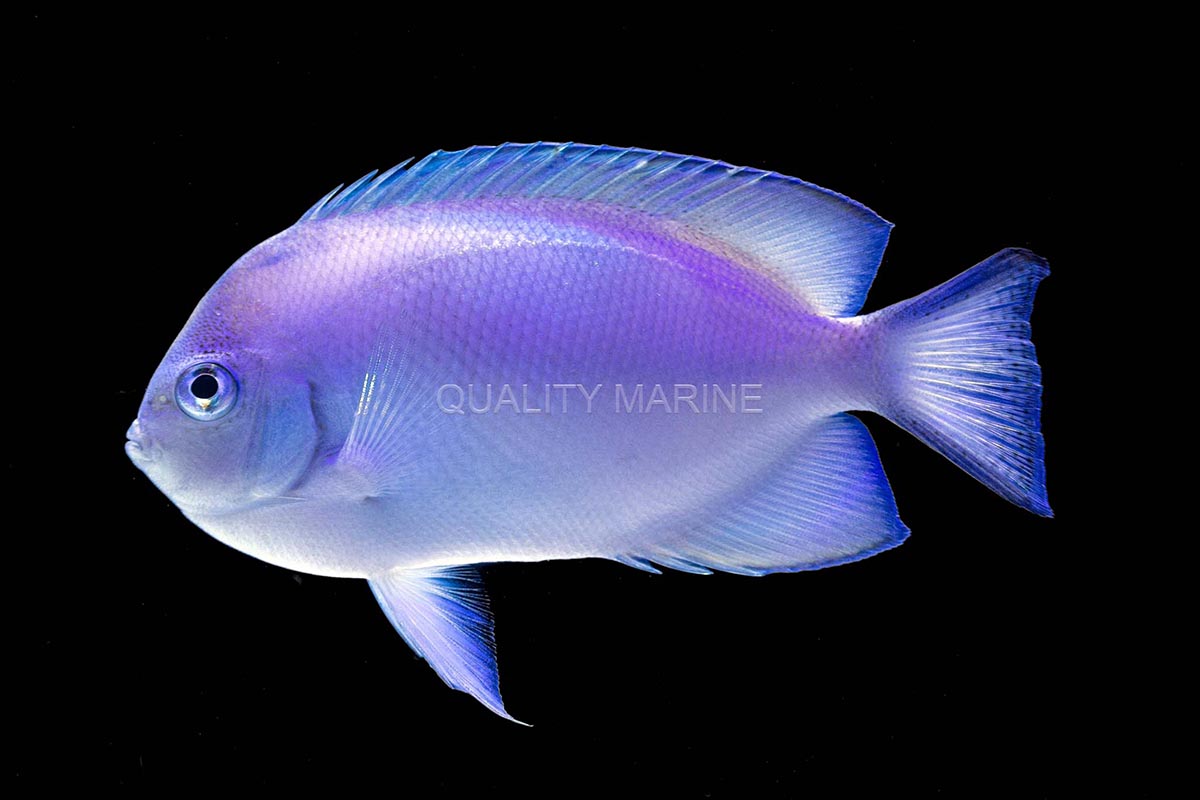 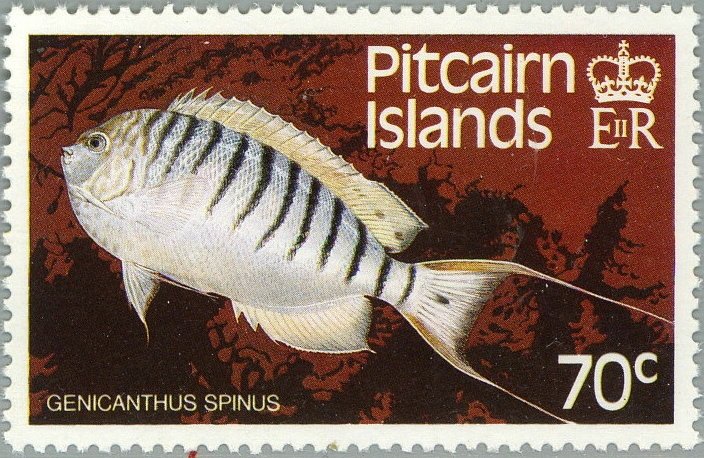 The male Pitcairn Angelfish, as depicted on a postage stamp from the Pitcairn Islands. 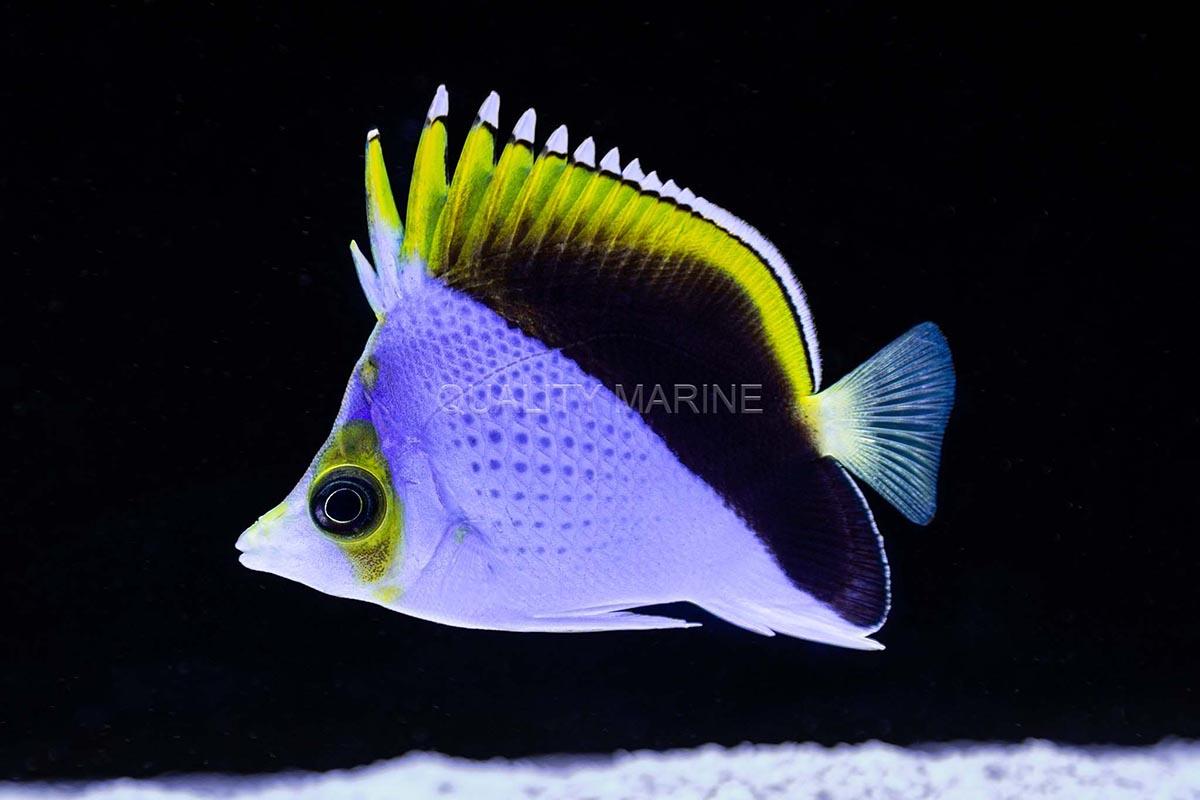 The Tinker’s or Tinker Butterflyfish, Chaetodon tinkeri, belongs to a group of deepwater-dwelling butterflyfishes that are generally considered reef-safe, or at least far less risky than most of their relatives. Image credit: Nick Neumann at Quality Marine.

The Tinker Butterfly (Chaetodon tinkeri) is typically collected around the Hawaiian Islands and occasionally in the Marshall Islands; to our knowledge this is the first example of Cook Islands–collected C. tinkeri in North America. In the wild, C. tinkeri are commonly found singly or in pairs around steep slopes at depths from 27 to 180 meters. The Tinker Butterfly’s golden mask is its most notable trait, and many researchers believe that the black marking by their caudal tail is actually a “false eye” to trick predators. 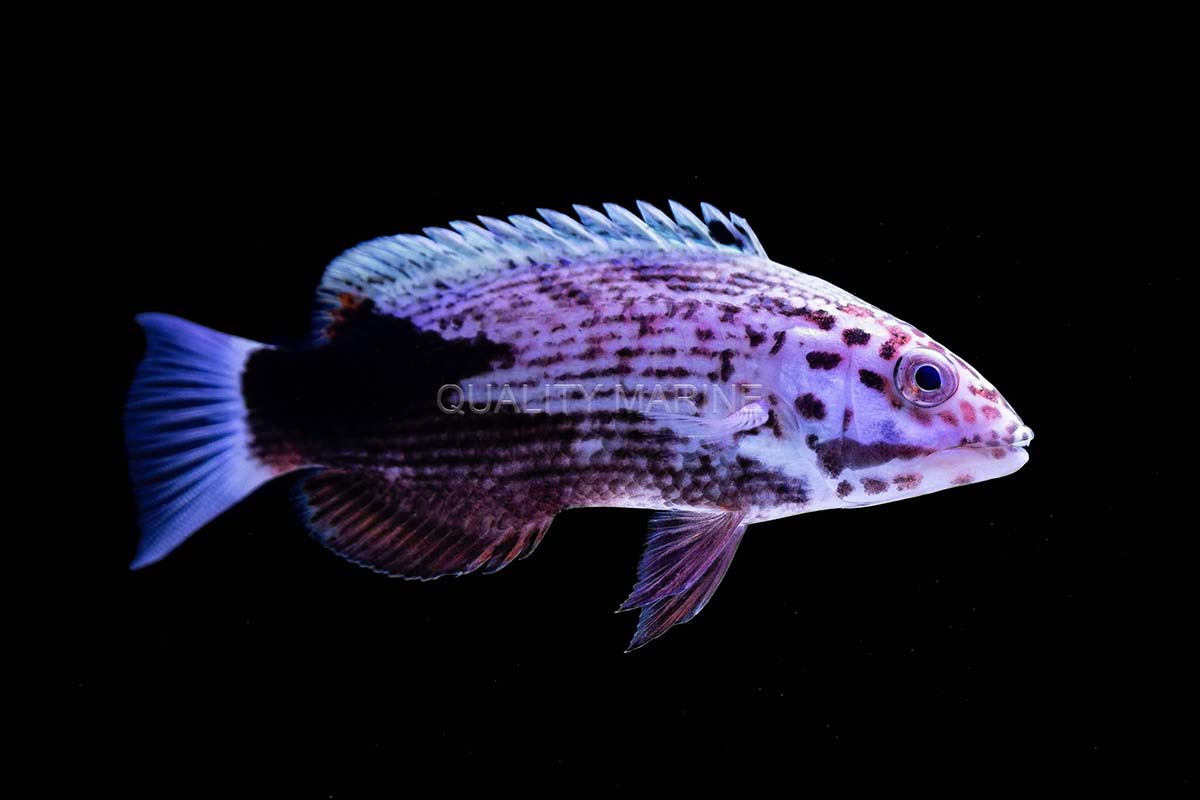 The juvenile Hogfish (Bodianus busellatus), another rarity, is new, not only to captive aquatics but to science as well, and was only recently classified as a new species (2006 Gomon). They can be seen scooting around reefs of the Central Pacific, Marshall Islands, Marquesas, and Pitcairn Islands. There they feed on just about anything they can fit in their mouths. Hogfish from the genus Bodianus are known to grow fairly large, averaging about 15 inches. The term “busellatus” roughly translates as saddleback, a reference to the large black spot on its back. 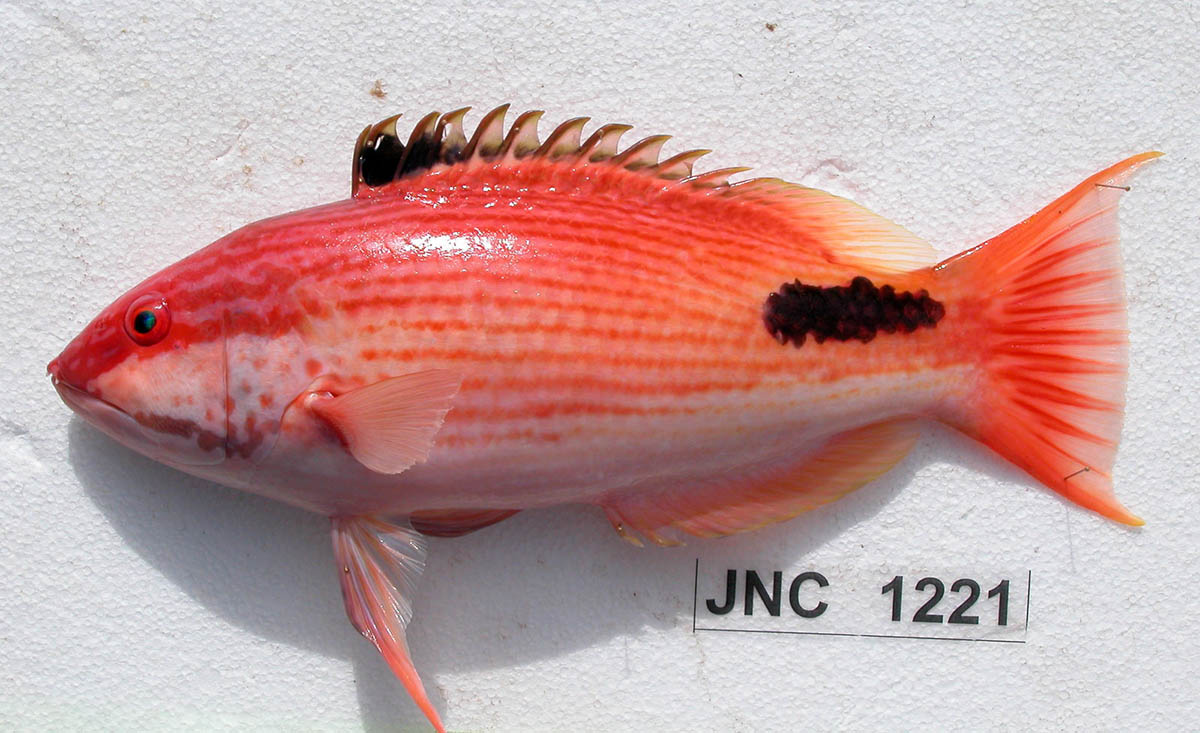 Very few of these species show up in the aquarium hobby, so it’s quite a treat to see them here at Quality Marine. They have made for a very exciting week thus far.