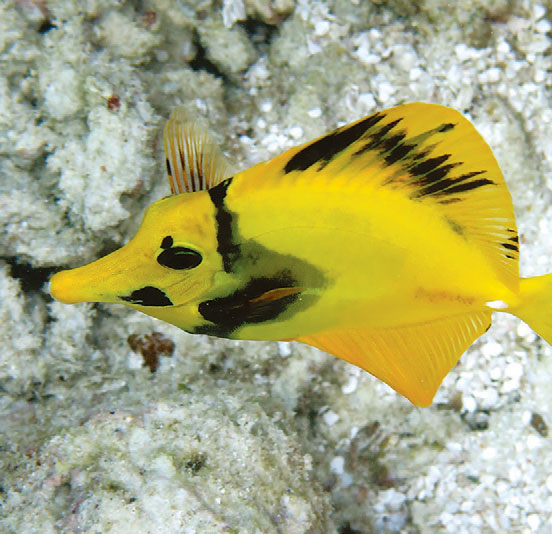 A “Koi Scopas” in shallow water close to the island of Kuredu, Lhaviyani Atoll, Maldives. Some observers speculate that the aberrant colors result from a genetic condition known as oligomelany. Image credit: R. Schmidt

an excerpt from the Reef News column of CORAL Magazine, March/April 2019 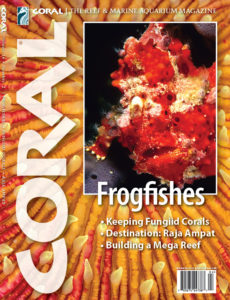 This article appears in CORAL Magazine’s March/April 2019 issue. Click to buy the back issue now.

Recently increasing numbers of color variants of the Scopas Tang (Zebrasoma scopas) have been turning up in the aquarium trade and have generated much curiosity—and elevated prices when they become available for purchase.

Surgeonfishes of the genus Zebrasoma are very popular with reef aquarists, but Z. scopas normally plays a minor role due to its brown base color, although it is extremely easy to maintain and a very elegant swimmer. It isn’t a trophic food specialist; it will move to pelleted and dry food after only a short settling-in period. In addition, it helps with algae control and will even consume thread and ball algae. Last but not least, it can attain a very old age in the aquarium.

Pure yellow specimens of this species, confusingly similar to the Yellow Tangs of Hawaii, have been known for quite some time. Pure black individuals have also been described, and probably result from hybridization with the Black Tang.

The oddly pigmented specimens, termed “Koi Scopas,” which in recent years have been imported mainly into the U.S. and England, have caused quite a furore. They are caught primarily for the U.S. and Japanese markets, where they fetch top prices: $600 to $800 or more is not uncommon.

The photos shown here were taken by R. Schmidt of Neu-Ulm, on an underwater mountain, a so-called giri coral patch just south of the Maldives island of Kuredu in the Lhaviyani Atoll. They were taken in the lagoon of the atoll at a depth of about 40 inches (1 m) at around midday. There was little coral growth at this giri, little but bare limestone rocks from which these surgeonfishes were grazing algae. These are a few of the rare photos that show Koi Scopas in their natural habitat. 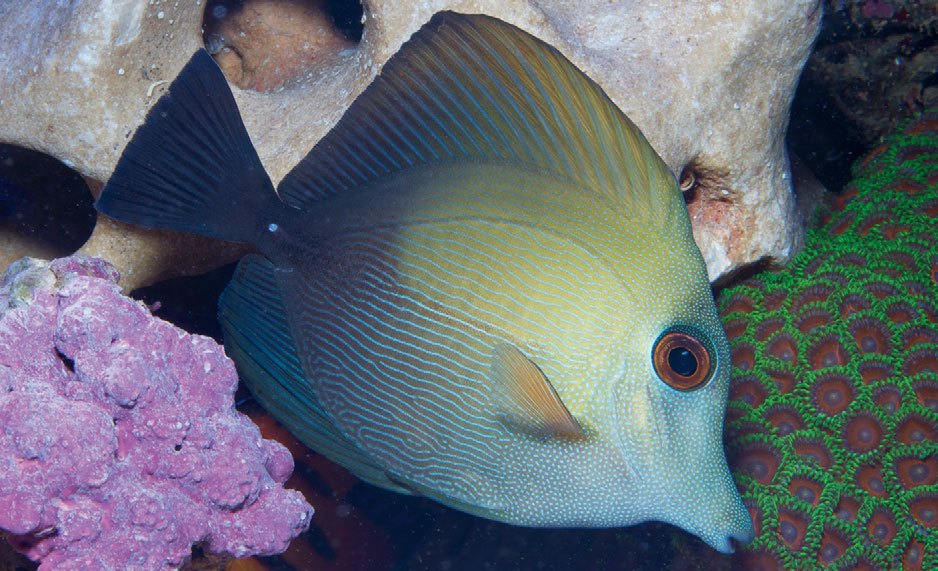 What are the reasons for the numerous different color variations and the extremely variable shape and position of the colored areas, with no individual being the same as the others? There are several hypotheses, but none of them has been proven yet.

The first hypothesis assumes that it could be a fungal infection that damages the epidermis (Debelius & Kuiter 2001). A second suggests that it may be a disease similar to the condition called vitiligo in humans, in which a destruction of the melanin-forming cells, the melanocytes, and results in similar irregular, blotchy whitening of the skin. The causes that trigger these skin changes are unknown.

However, the most likely explanation is that these are oligomelanic fishes, which are well known in the freshwater aquarium realm. For example, the Midas Cichlid, Amphilophus citrinellus, comes from Nicaragua, where about half of the wild population displays a blotchy color pattern and are regarded as albino variations with “oligomelany.” In this naturally occurring genetic condition, a fish can produce pigment, but it is limited in its ability to distribute melanosome cells containing colors over its entire skin surface. Some areas are white or a background hue, others are various shades of darker color. According to Marc Eliason on Cichlid Forum, “Oligomelanic individuals are known in many herptiles and fishes, including Pelvicachromis pulcher, swordtails, mollies, and others.”

Now, whatever the cause may ultimately be, there seem to be two categories of Koi Scopas: color-stable and those that may change their colors in the course of aquarium maintenance.

Because of this, you shouldn’t be disappointed if you paid a lot of money for this type of rarity, and then after a period of maintenance, it changed to normal brown or yellow.

To view additional exclusive images of Koi Scopas Tangs from the Maldives, subscribers can log in to the CORAL Magazine Digital Edition now. Or buy the back issue!