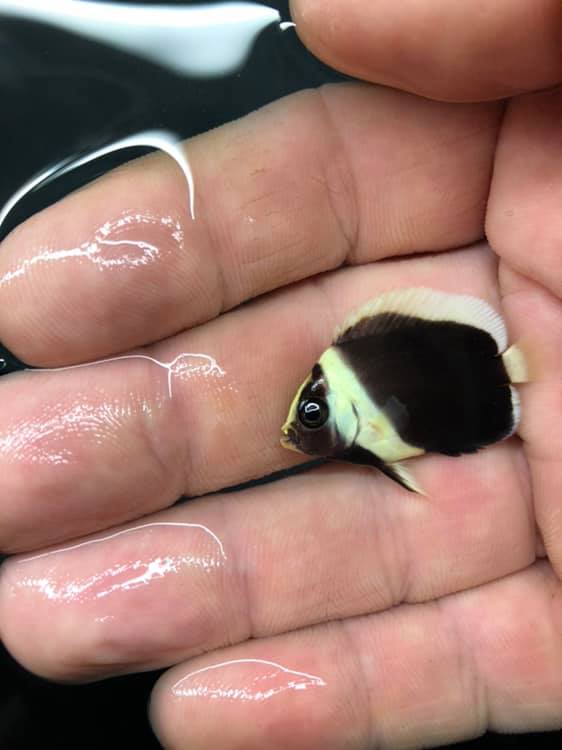 Nearing market size, this captive-bred juvenile of the undescribed Black Phantom Chaetodontoplus sp. angelfish heralds the latest “species first” in the world of marine aquarium aquaculture, and is another feather in the cap for the team at Poma Labs. Image courtesy Poma Labs.

Can you call it a marine breeding “species first” when the fish in question hasn’t even been taxonomically described (and could even wind up being a geographic variant of an existing species)? It’s the tale of a Holy Grail species being bred before anyone even knew about it, and the story is just starting to unfold. 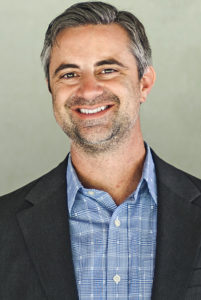 Dr. Matthew L. Wittenrich, award-winning marine ornamental fish breeding researcher and co-founder of Florida-based Poma Labs, shares the story of this latest accomplishment. “The Black Phantom Angelfish broodstock was sourced in the fall of 2017. I first saw this species posted on RVS Fishworld’s Facebook page and fell in love. As you know, I am a die-hard fan of Chaetodontoplus, and this fish quickly made it on my ‘must-have’ list.”

Shortly after seeing its picture for the first time, Wittenrich contacted Barnett Shutman, of RVS Fishworld, a Philippines-based livestock collection operation (with satellite operations around the Indo-Pacific), who made arrangements to help Poma Labs obtain some exceptional net-caught broodstock with the help of Jerry Tieder at T.F.T. Distributors.

“It took two years for them to mature, and we hit many snags in pairing and spawning,” says Wittenrich. “Despite these difficulties, we finally succeeded in bringing a handful of Black Phantoms through metamorphosis.”

Shutman, who was responsible for bringing these fish to the trade and into Poma’s lab, couldn’t be happier to hear of the success. “Congratulations to Matt; it’s a beautiful angel indeed!” 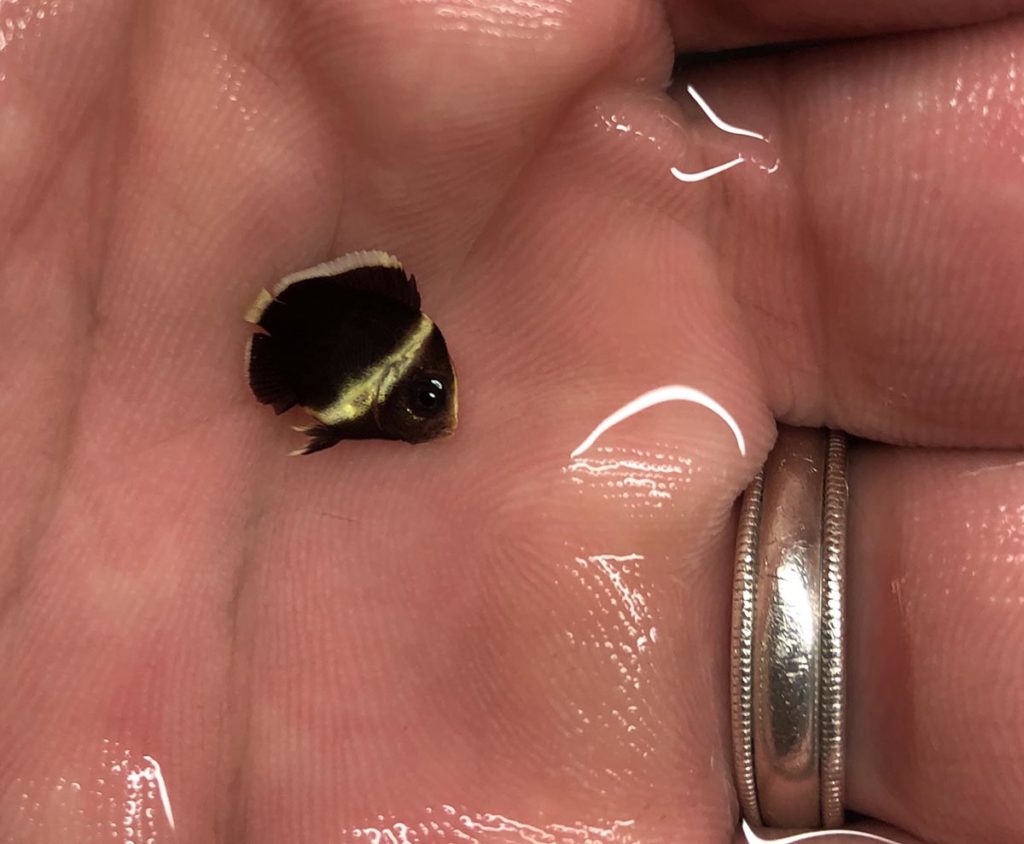 One of the first captive-bred individuals of the undescribed Black Phantom Chaetodontoplus. Note the ring for scale! Image courtesy Poma Labs.

What Is the Black Phantom Angelfish?

Reef Builders blog editor Jake Adams may have been among the first to introduce the world to this unique, and potentially undescribed, angelfish of the genus Chaetodontplus. Quickly dubbed the Black Phantom Angelfish by Adams, not much else has been written or shared about this fish, which is currently only known from the northern Philippines.

What is known is that the Black Phantom is clearly a member of a close-knit group of related species, most of which cannot be properly identified until they’ve attained mature, adult coloration. Outside of visual identification of adults, knowing where a fish was collected could be key to proper species identification.

The most commonly encountered member of the group is the wide-ranging Chaetodontoplus melanosoma, often called the Black Velvet or Grey Poma Angelfish, found in western Indonesia and north into the Philippines. As an adult, C. melanosoma has a bicolor flank, gray on the upper half shading into black below. The caudal fin is black, either outlined or edged in yellow, apparently depending on the fish’s state of maturity.

Very similar in appearance, C. dimidiatus, the Velvet, Pewter or Phantom Angelfish, differs mainly by having a well-defined border between black and gray areas, and a solid yellow caudal fin as a mature adult. It has a more restricted range in Indonesia, including notable locales such as Raja Ampat and Sulawesi.

The Vanderloos Angelfish, C. vanderloosi, is found much further east than either sibling species. It was originally described from Milne Bay in Papua New Guinea. It differs from the first two species by having a body that is mainly black, with a black caudal fin edged in yellow at maturity. 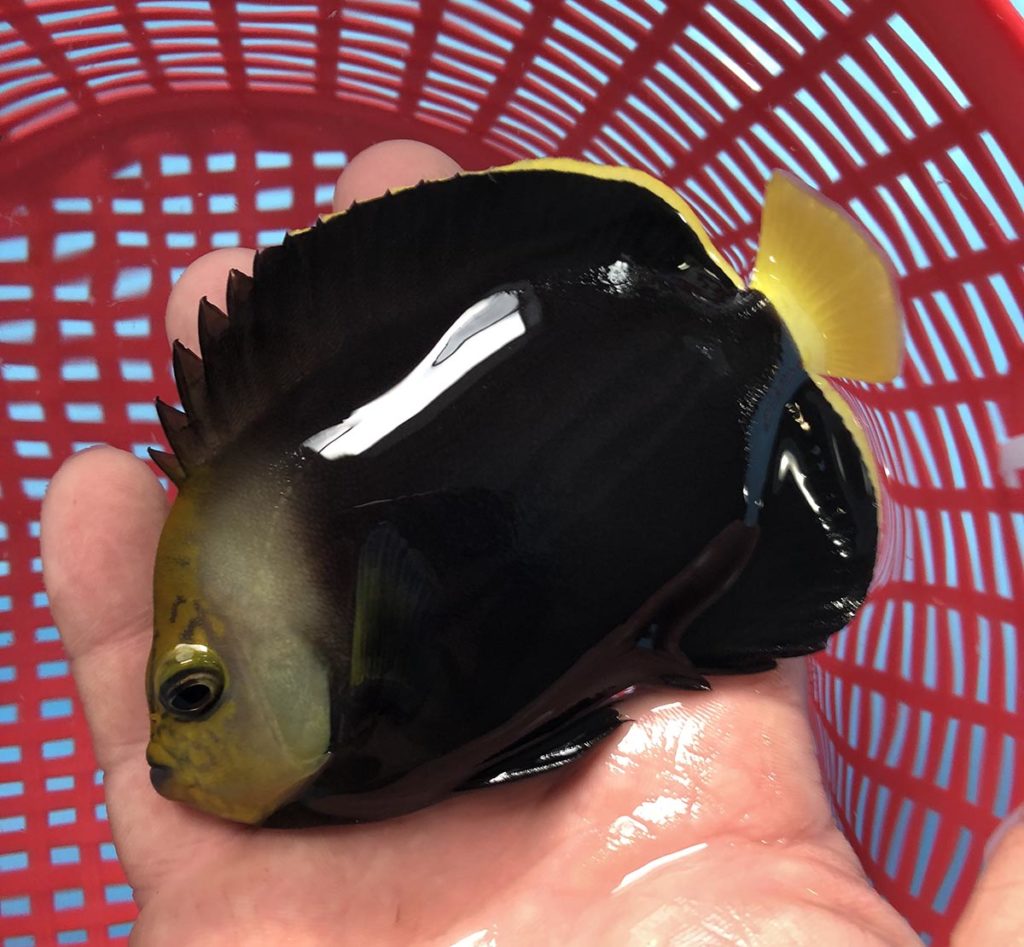 The Black Phantom Angelfish differs from all of these, effectively reshuffling these diagnostic traits into yet another configuration. Outwardly, it shares the deep black body coloration of C. vanderloosi, and might well be confused with that species were it not for the distinctive yellow tail of a mature Black Phantom. That, and the reality that the two phenotypes are separated by thousands of miles, make a compelling case for the Black Phantom being a species awaiting a description. A solid yellow caudal fin is a trait is shared only with C. dimidiatus, which has the aforementioned half-gray half-black color scheme. Therefore, when coining a trade name for this new form, Adams simply added “Black” to the Phantom trade name used for C. dimidaiatus, highlighting the mostly black body color of this undescribed fish in contrast to C. dimidiatus.

Barnett Shutman and RVS Fishworld, the company responsible for first bringing the Black Phantom Angelfish to aquarists’ attention in 2017, notes that this species remains difficult to obtain. “For six months per year, the weather where we collect the Black Phantom Angel is very bad, and typhoons are frequent. The season for collection has just started, and by October we’ll be done collecting in that part of the Philippines.”

Always a scientist and researcher, Wittenrich shared some interesting views on the importance of the Black Phantom Angelfish. “Perhaps the most intriguing aspect of this fish lies in the possibility that it is one of the input species to the elusive Maze Angel [sometimes considered a hybrid, other times considered a legitimate species as Chaetodontoplus cephalareticulatus – Ed.]. Given the collection location of the Black Phantom Angelfish, it likely hybridizes with Blueline Angelfish (Chaetodontoplus septentrionalis) in the wild. One of my goals is to see what this proposed cross looks like when made with known parentage in the lab. Will they match up with the Maze Angelfish, in support of the hybrid hypothesis?” 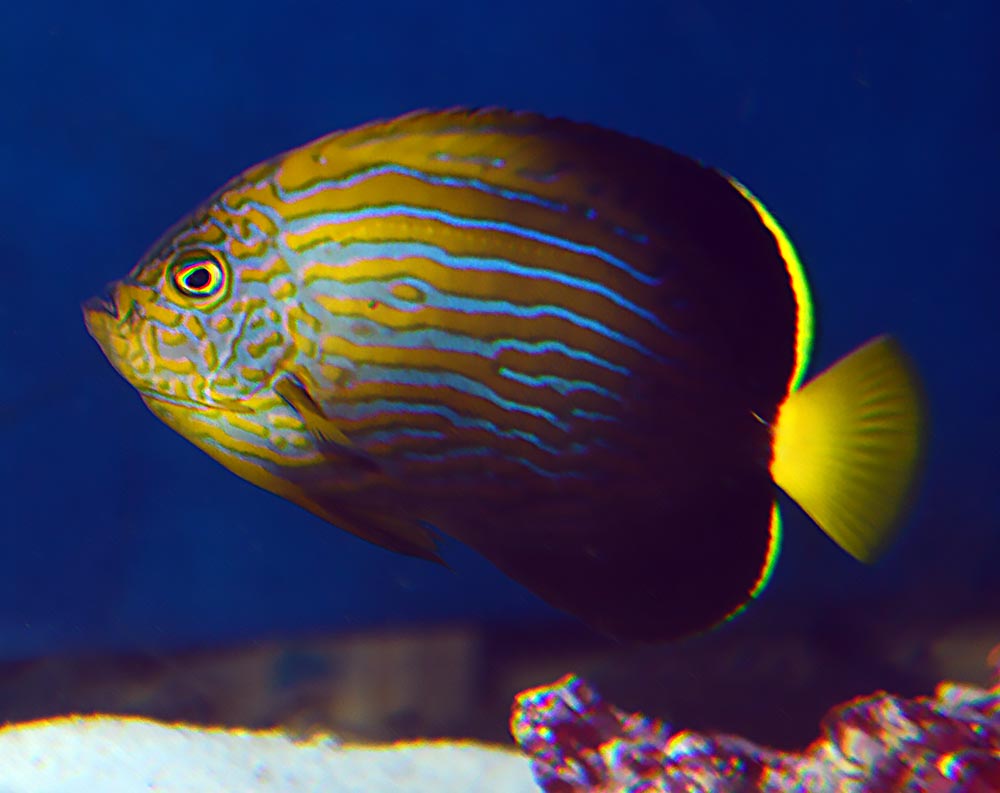 This young adult Maze Angelfish is on display at the Lake Superior Zoo in Duluth, MN. It was captive-bred by Bali Aquarich in 2016. Could experimental breeding lend support to the hypothesis that this “species” is, in fact, a naturally occurring hybrid? Image credit: Matt Pedersen

It sounds like Wittenrich has already put his theory to the test, as he cryptically relayed, “We are hopeful that over the next few months that we will start to see not only the mature colors of the Black Phantom come through, but also what the ‘Maze’ Angels look like.” Angelfish enthusiasts around the world will have a hard time waiting while the answers unfold in the tanks at Poma Labs.