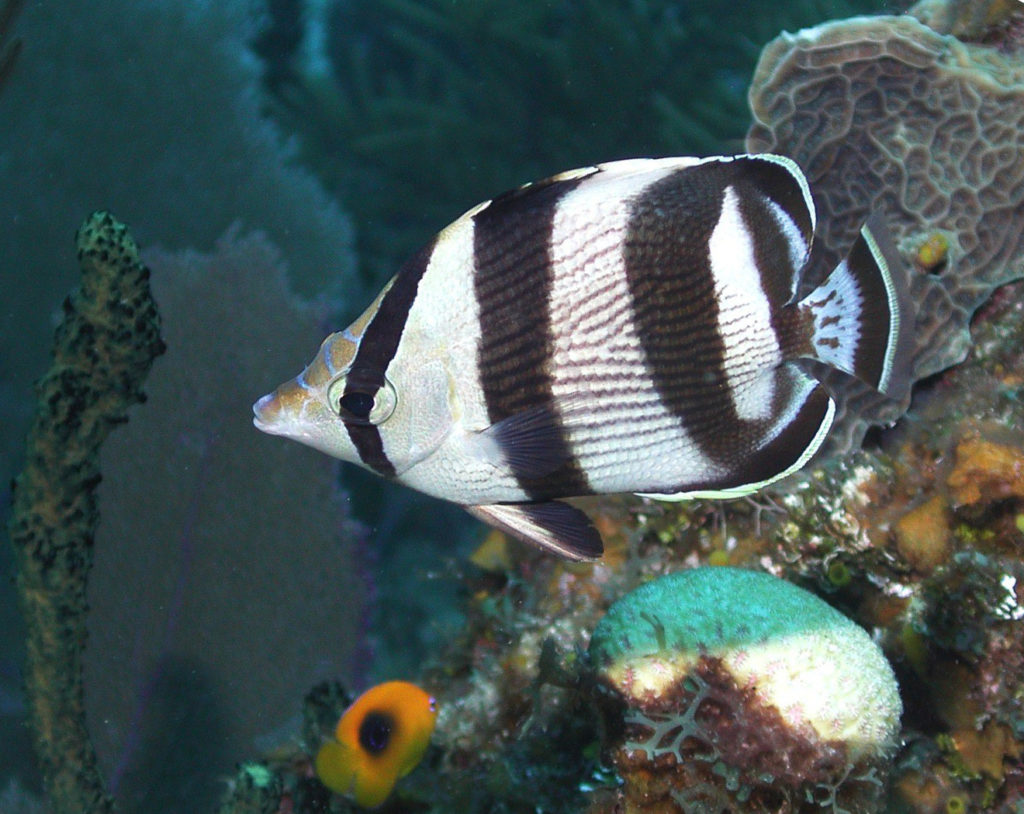 The UF/IFAS Indian River Research and Education Center, with Rising Tide Conservation, is pleased to announce the successful aquaculture of the Banded Butterflyfish, Chaetodon striatus!

This success was achieved by the hard work of Dr. Cortney Ohs, Benjamin Lovewell, Paul Schlict, and Fred Shopnitz.

Banded Butterflyfish, Chaetodon striatus, are also known as Banded Mariposa, Portuguese Butterfly, and School Mistress. They are native to the tropical and subtropical western Atlantic Ocean, and their range extends from Florida in the United States to Santa Catarina in Brazil, and includes the Caribbean Sea, the Gulf of Mexico, and Bermuda. (Seasonally, juveniles are sometimes carried north to New England by the Gulf Stream, but they are unable to survive the winters there.)

Banded Butterflyfish coloring is silvery with a slender black bar passing through its eye, two wide black bars in mid-body, and a third wide bar that starts on the rear of the dorsal fin and continues to the caudal peduncle. The pelvic fins and the caudal fin are black.

The Banded Butterflyfish is usually seen on reefs either singly or in pairs, but is occasionally observed in groups up to twenty individuals. The diet is mainly small invertebrates, crustaceans, coral polyps, polychaete worms, and various eggs. Banded Butterflyfish can act as a cleaning fish and remove the external parasites from larger fish.

Banded Butterflyfish do not reproduce in groups but form monogamous pairs before this spawning behavior. They are multi-batch spawners: they broadcast eggs and sperm into the water column. 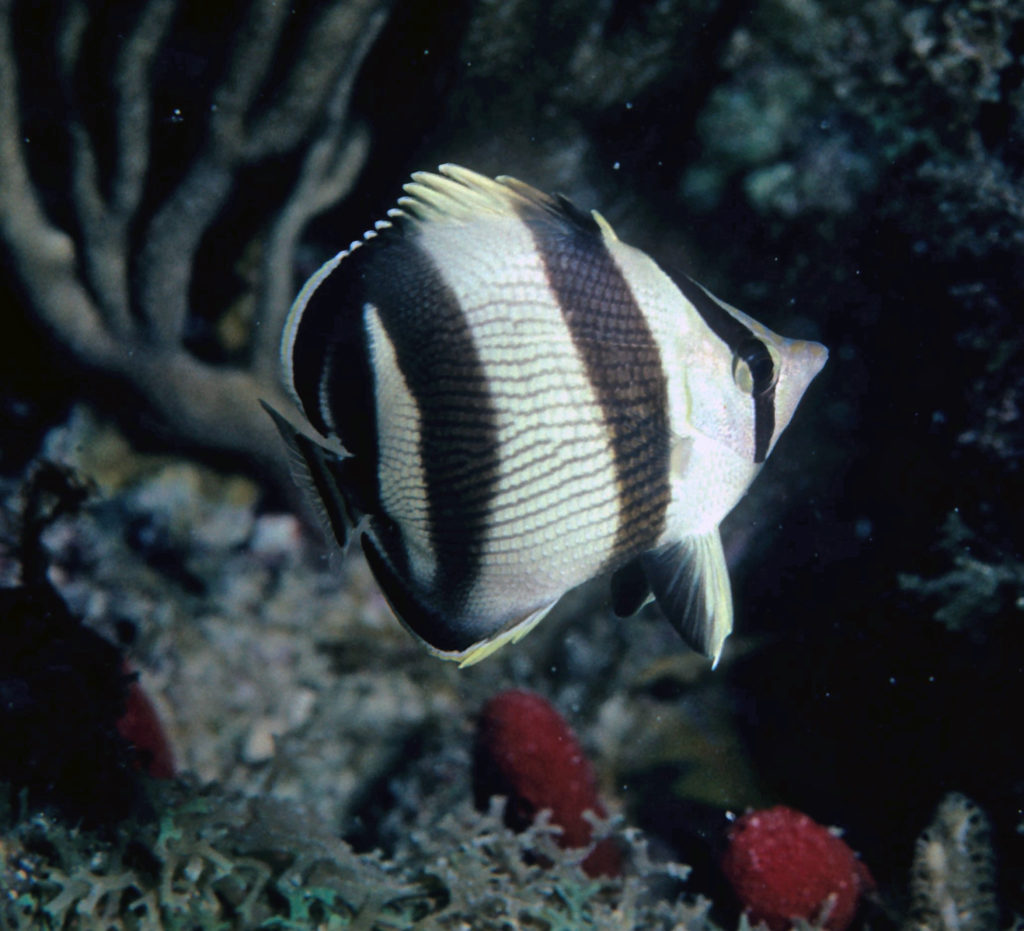 The Banded Butterflyfish has never been successfully aquacultured before, and there are no reports of spawning in captivity.

In 2015, a pair of Banded Butterflyfish were collected by Dynasty Marine in the Florida Keys and were transported to the University of Florida Indian River Research and Education Center in Fort Pierce, FL. The pair was stocked into a 1500-L circular tank with a recirculating aquaculture system with an external egg collector. The fish were provided large PVC pieces for habitat. Lighting was controlled to 13:11 light-dark cycle with an additional hour of building light simulating a sunrise and sunset. After three years, only a few spawns with no fertilization had occurred, so the Banded Butterflyfish were stocked into a 2700-L circular tank with a recirculating aquaculture system and external egg collector. They were combined with a pair of Spotfish Butterflyfish (Chaetodon ocellatus) and several Rock Beauty Angelfish (Holacanthus tricolor). After several months, spawning was observed, with 63 spawns (1000-28000 eggs/spawn) occurring. Of these, 54 spawns were unfertilized eggs, while nine had partially fertilized eggs (0.1-86.4% fertilization). It was unknown which species of butterflyfish was spawning, but all of the eggs appeared to be of the same species. 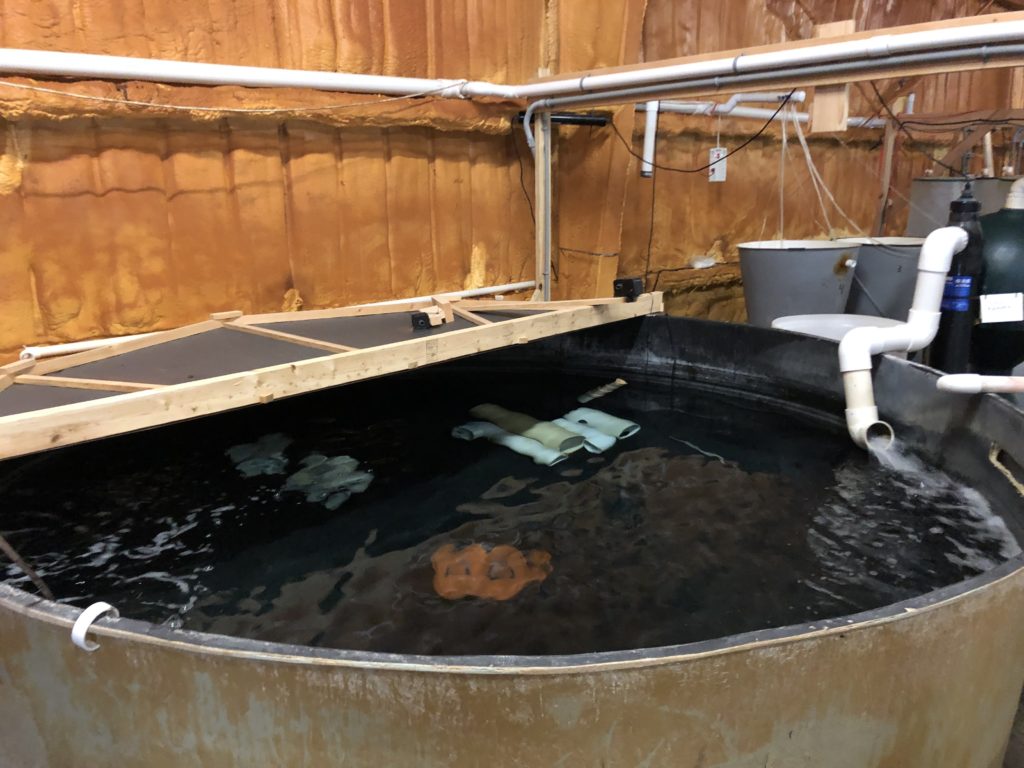 On February 4, 2019, about 20,000 eggs were collected with 86.4% fertilization with a water temperature of 26°C. Fertilized eggs were stocked into a 104-L fiberglass tank with black walls and bottoms, equipped with a screen to retain eggs and larvae and allow uneaten copepods and rotifers to flush out of the tank. This tank was part of a larger recirculating aquaculture system used for the entire larval culture room. The recirculating aquaculture system was equipped with an 80-watt UV sterilizer, two bag filters with 50 and 10 μm felt bags, a protein skimmer, and a trickle filter. Water exchange within the larval tank was turned off during the day and increased to approximately five tank turnovers per night. This was done to maintain live food densities during the day and flush out uneaten food at night. Lighting was provided by fluorescent lights with a 16:8 light:dark cycle.

Hatching occurred within 24 hours with water temperatures of 26-27°C. Mouthparts were present by 3 dph. Swim bladder inflation occurred on 12-16 dph, and flexion occurred from 17-18 dph. Faint coloration to the bands was visible 50 dph, and there were dark, obvious tail spots present 57 dph. They were settled and more benthically oriented by 52 dph, so PVC structure was added to the tank at that time.

Otohime dry diet was fed ad libitum from 25 dph onwards, starting with A1 and increasing to C1 in particle size.

Editor’s Note: This latest accomplishment brings the total number of Chaetodontids that have been successfully aquacultured to six. It is the second butterflyfish accomplishment for the team of researchers at the UF/IFAS Indian River Research and Education Center.