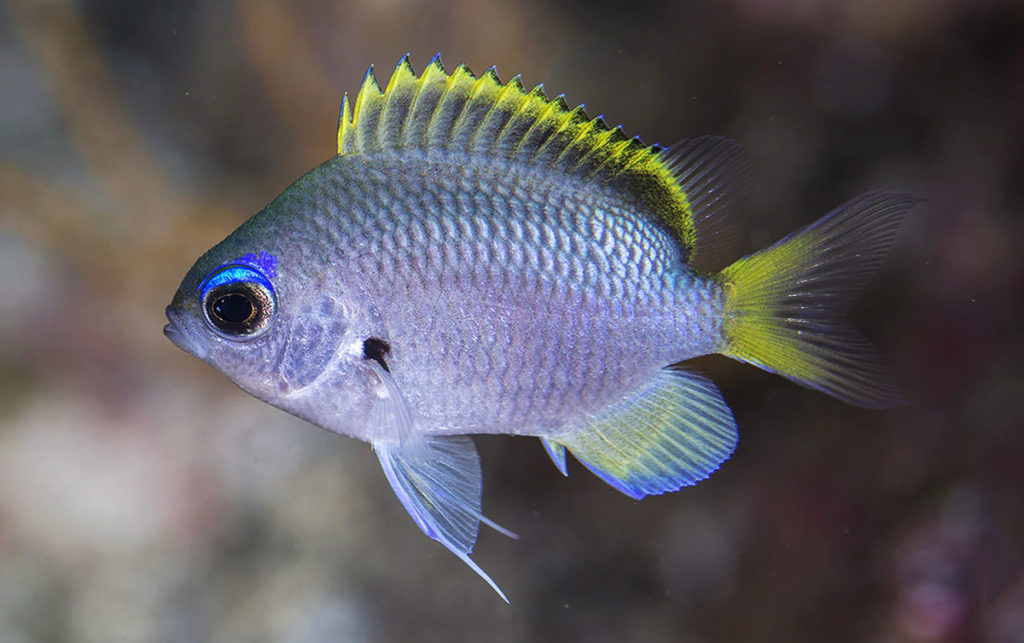 It’s a bit early for a Mother’s Day gift, but scientific journals don’t set their publishing timelines based on the scheduling of U.S. Holidays. Ting-Ting Eng, the woman we can credit for raising an up-and-coming ichthyological taxonomic powerhouse, will just have to accept this year’s gift from her son a little ahead of schedule.

Authors Yi-Kai Tea, Anthony C. Gill, and Hiroshi Senou have introduced the world to the newest Chromis species, Chromis tinging sp. nov., in the journal Zootaxa, published April 17th, 2019. You can read the paper here on ResearchGate. The species is rarely seen in the aquarium trade; it is found mostly in specialty collections, as it originates from the deepwater reefs of southern Japan. 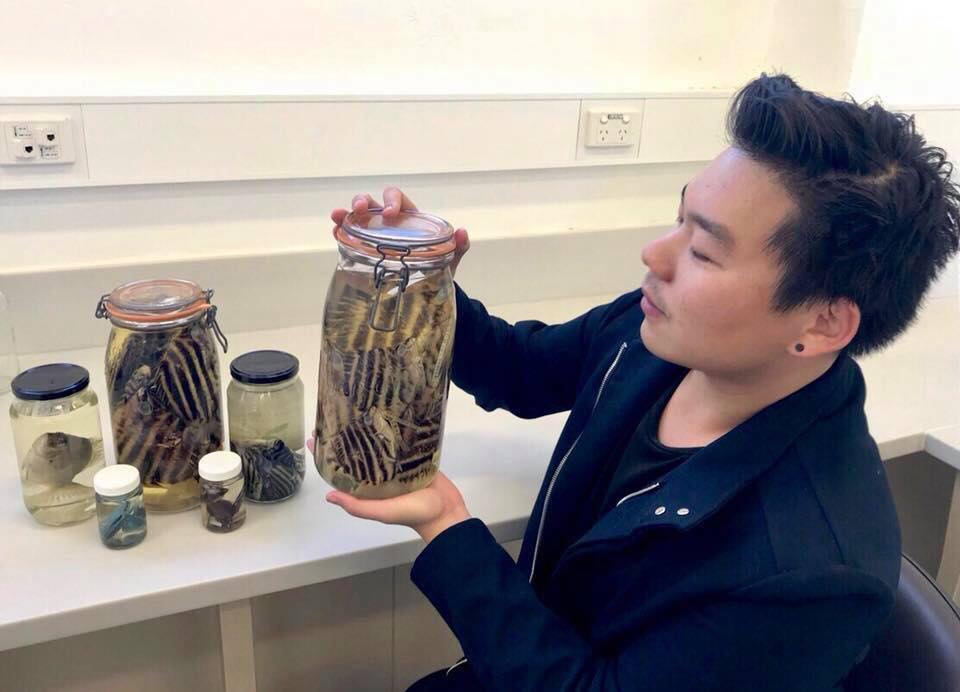 “Lemon” Tea Yi-Kai, at work with specimens of the Stripey, Microcanthus strigatus, for an earlier investigative project.

On Honing Your Craft

Yi-Kai Tea is perhaps better known in the aquarium hobby and industry informally as Lemon Tea Yi-Kai (first name Yi-Kai, last name Tea, but feel free to call him Lemon, and often shorthanded as Lemon TYK), who first drew attention in aquarium hobby publications by making bold insights and observing the details that others overlooked, often raising awareness of biodiversity that would otherwise be left unknown in the modern era.

Joining the ranks of academia in 2016 and now a Ph.D. candidate at the University of Sydney, Tea already has a list of formal publications crossing into double digits and includes credits on the description of nine new marine fish species, most of which are known to aquarium hobbyists and were discovered by the aquarium trade. Anthony Gill and Hiroshi Senou are coauthors of this latest paper.

“Gill has taught me a lot,” shared Tea, “especially the ins and outs of basic taxonomy. He is also on my Ph.D. supervisory panel, where he mostly advises on morphology and biogeography. Senou is a seasoned ichthyologist and collaborator from Japan whom we work with often.”

From Wrasses to Damsels

Since he’s known as a bit of a wrasse man (Tea just finished up a personal social media photography blitz entitled #59DaysOfFairyWrasse), we had to ask him how a deepwater damselfish managed to grab his attention.

“I am mostly interested in wrasses, yes,” began Tea, “but it’s also good to get a grasp on the ins and outs of alpha taxonomy and systematics, i.e., learning how to take data, learning how to do measurements, familiarizing yourself with fish anatomy, structures, etc. It’s really in species descriptions that you get to practice, apply, and hone these skills. There’s also the patience needed in searching the literature and familiarizing yourself with that group of fish. Overall, it makes you a better ichthyologist.

“As to how C. tingting caught my attention? Hiroshi Senou is a long-time collaborator, and the museum he works in has an online photographic database of fishes in the collection. We often look through it to see if there are any new species that we can work on. I recognized this damselfish immediately because I am familiar with Chromis mirationis, as well as the putative new species at the time (mostly because of all the years spent writing about reef fishes in my blogging days, and also just being familiar with the Japanese fish scene).”

CORAL: “So you’re looking through these archives for fish that have been overlooked?” we asked.

“Yes. That’s the beauty of museum reference collections. Actually, a large majority of new species comes from these types of collections. They’re hidden under our noses. Sometimes you just gotta look at what’s in front of you, sort out the mislabeling and misidentifications, and every so often you get to name a new species along the way.”

CORAL: “Do you feel a bit like an ichthyological Sherlock Holmes? Or is this more of a fish pirate (in a good way)…hunting down undiscovered treasure?”

“Oh, it’s definitely more Sherlock Holmes,” Tea responded. “There’s a lot of ‘investigative taxonomy’ going on behind the scenes, tracking down ‘lost’ specimens, digging up literature that is decades old, sometimes even centuries [old], figuring out and addressing other people’s mistakes in the past…” 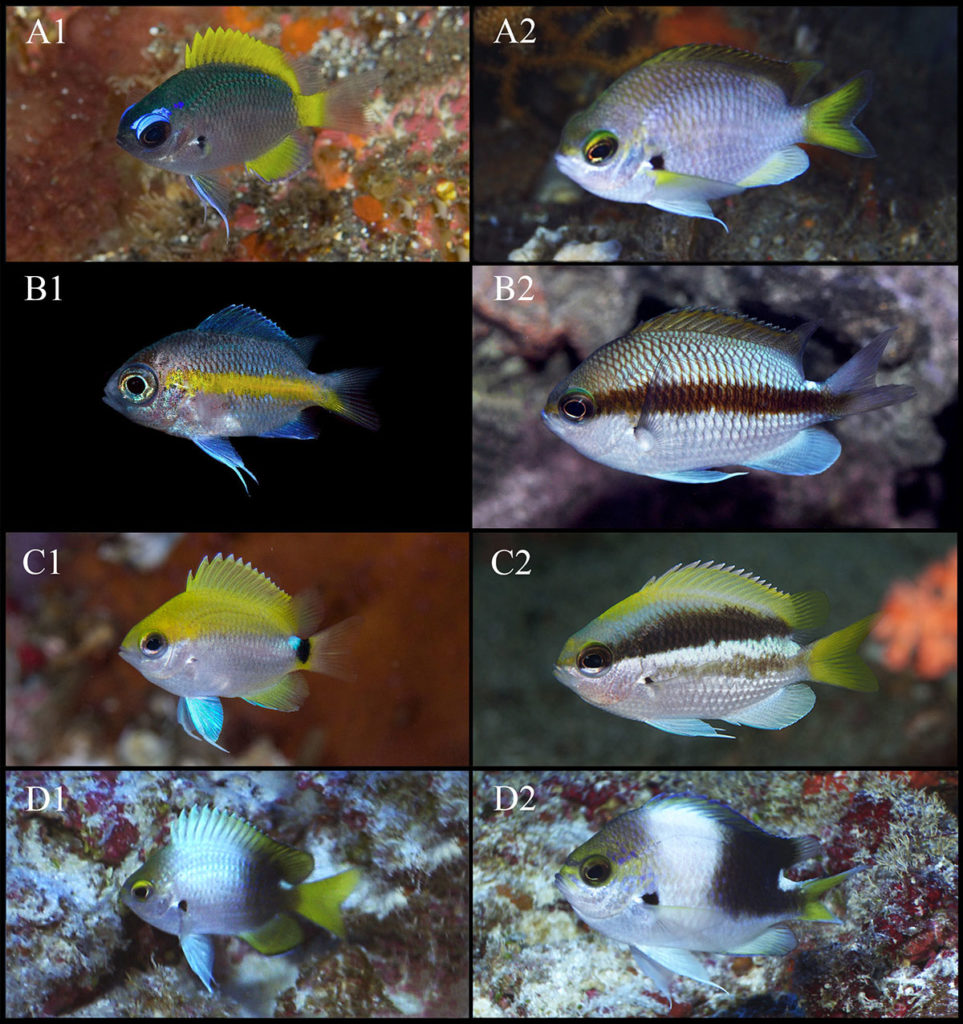 Turning to the new species description, Tea shared some of the nitty-gritty work that can go into justifying a new species. “Chromis tingting has historically been confused for another species, Chromis mirationis. Since we described C. tingting from museum specimens, we didn’t have DNA to analyze, nor did we have DNA for C. mirationis. Plus, the type specimen of C. mirationis was listed as ‘missing/lost’ in the Catalog of Fishes. So we had to track down the holotype of C. mirationis, a 102-year-old specimen, mind you.

“We knew it was somewhere in Japan. Hiroshi Senou asked around, asked where it was stored, and eventually found it. Presumably, it was never lost, just maybe bad bookkeeping and recording. Once we had access to the holotype of C. mirationis, we were able to take data from that, and then justify the difference between the new species.”

What was lost can be found: the century-old holotype of Chromis mirationis. Photo by H. Senou.

Says Tea, “Mum’s always been so supportive of my passion and love for this hobby and industry, and it really is a thankless job being a mum. Especially coming from a single parent background, she had to give up a lot of things for me. And you know as much as I do that being a scientist is not often easy, and I may not be able to buy her a big house or give back to her the way she’s done raising me. But what I can do is describe fish, and so I think it’s the least I can do really, to name one in honor of her.” 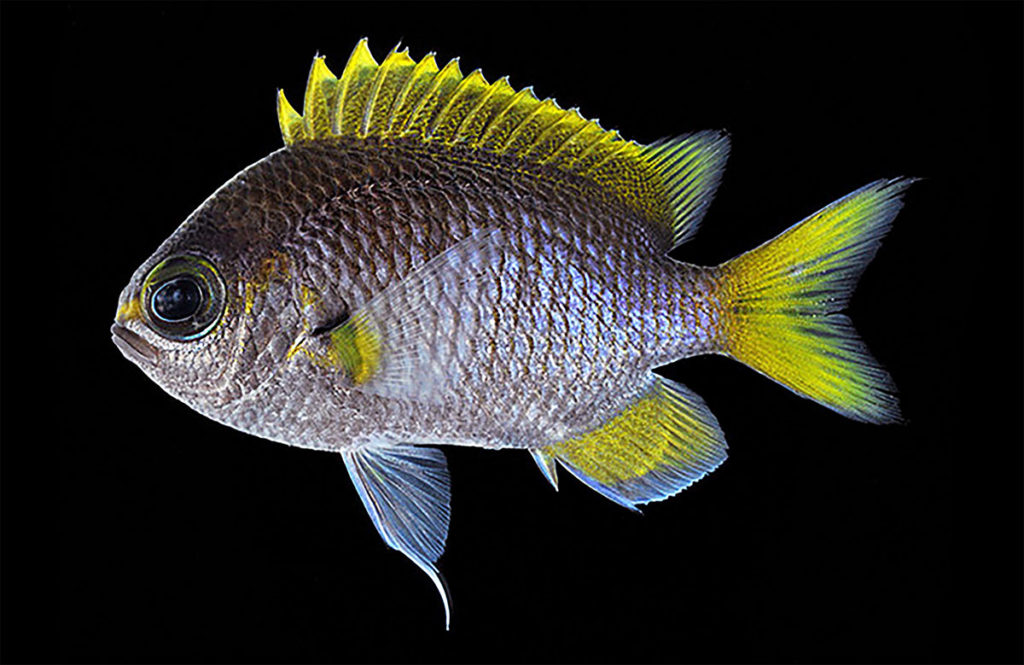 One more look at Ting-Ting’s Chromis, AKA the Moonstone Chromis, or Gekko-suzumedai in Japanese. Photo by H. Senou.

Officially “named in honor of the first author’s mother, in recognition of her unconditional love, support, and encouragement. To be treated as a noun in apposition. The common name Moonstone Chromis refers to the pearlescent, silvery-blue coloration of the juveniles and adults of this species. ‘Gekko,’ of the new standard Japanese name, means moonlight in Japanese.” 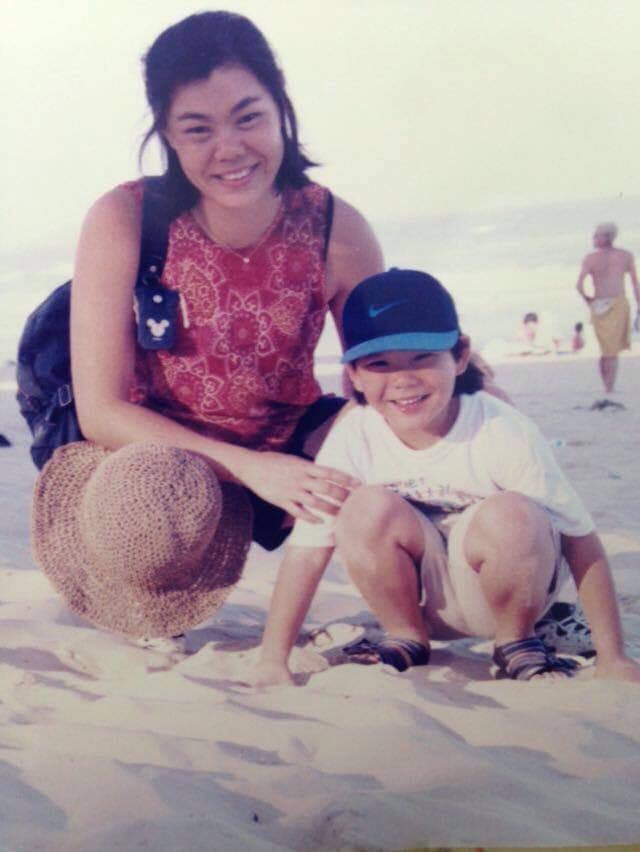 Ting-Ting Eng, the namesake of the Moonstone Chromis, and her son, future ichthyologist Tea Yi-Kai, circa 2000. Photo courtesy Tea Yi-Kai.