Back on Track Towards Cyanide Detection for Marine Fish 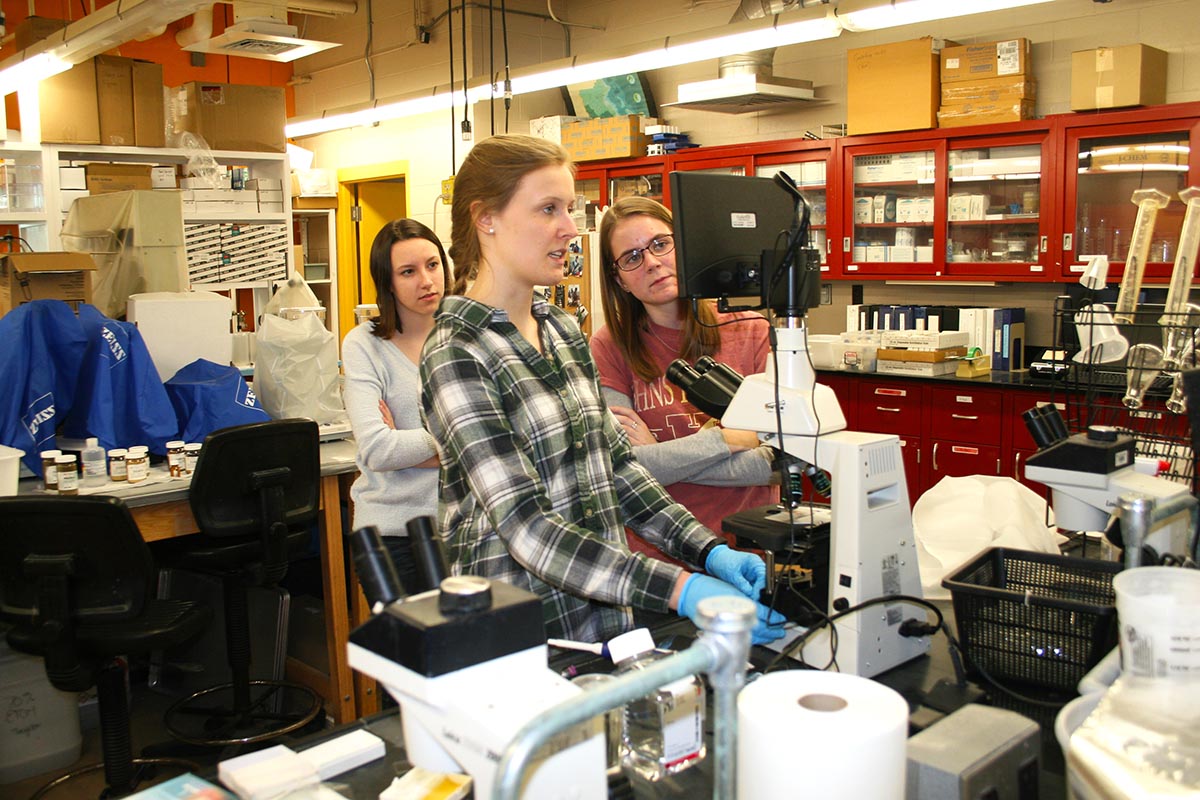 Sara Hunt, a lead author on the report and senior biology and chemistry double major at RWU, demonstrates how to examine the fish blood specimen under a microscope to undergraduate student researchers in RWU’s Wet Lab.

New research establishes a timeline over which cyanide testing in marine fish would be viable, helping to combat cyanide fishing before fish enter the aquarium trade

BRISTOL, R.I. – As a critical step in developing the first test to help reduce the destructive and illegal trade of cyanide-caught marine fish, Roger Williams University professors and undergraduate student researchers have measured the residence time of an important metabolite in the blood of marine fish after cyanide exposure.

Cyanide fishing is a widespread problem in the Indo-Pacific region, where fishermen spray cyanide solutions onto coral reefs to stun reef fish and make them easier to capture for the marine aquarium and live fish food trades. In the process, all the organisms that live on the reef, even the reef itself, may be compromised, contributing to the decimation of some of the world’s most productive reefs.

For decades, the scientific community has been seeking a solution to identify fish caught by cyanide. The most recent focus had been on trying to detect a metabolite in the water of the captured fish. But two years ago, RWU researchers Andrew Rhyne and Nancy Breen proved that method to be erroneous. That’s when Rhyne and Breen realized that they needed to go to the source, and look within the fish.

“We went back the beginning and thought, if you expose fish to cyanide, where would an indicator of that exposure be? And it would clearly be in the blood plasma, just like most drug metabolites,” said Rhyne, an Associate Professor of Marine Biology at RWU. “So we developed a method that’s like a blood test you would give an athlete. It uses some of the same technology used for looking for performance-enhancing drugs or other banned substances in humans.”

Their study gives a timeline over which post-exposure testing of marine fish exposed to cyanide could be viable. This research provides a first step in developing a comprehensive test and is only for a single species, but they are continuing to use their method on other species of marine fish under lab conditions and eventually hope to use the method out in the field. 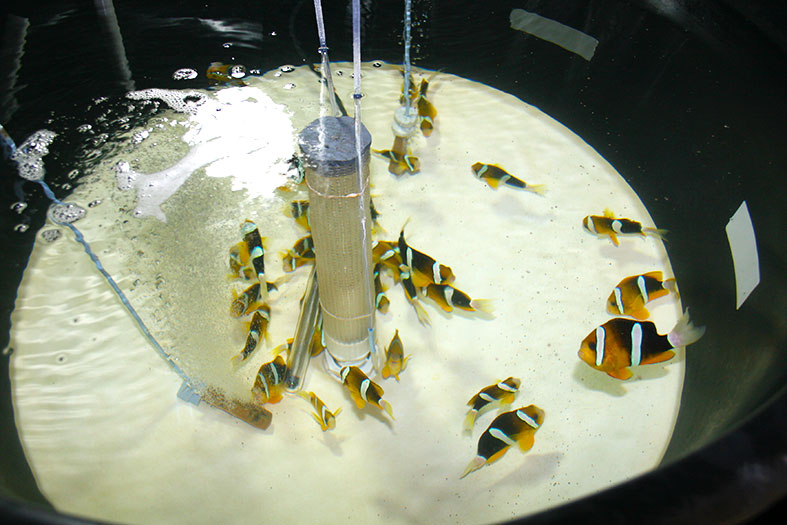 Clownfish feed inside a tank in the RWU Wet Lab.

Inside the RWU Wet Lab, carrot-orange, black-striped clownfish swirl among each other in tanks of saltwater drawn straight from the bay. RWU researchers have aquacultured clownfish for many years, making it the obvious species with which to start their research.

The clownfish in their experiments were exposed to cyanide in baths for different lengths of time. Not enough to kill the fish, but to stun them as if drugged by a fisherman using cyanide in the wild. Once exposed, cyanide is quickly metabolized into thiocyanate, which, like other detoxification byproducts, can be found in the bloodstream.

The rapid metabolism of cyanide prevents researchers from looking for it directly. Instead, they search for its metabolite, thiocyanate – the same chemical that is found in the blood and saliva of smokers who are exposed to cyanide from smoking cigarettes, Rhyne said.

In the RWU Chemistry Lab, Breen led the student researchers in analyzing the blood of the exposed fish. Using high-performance liquid chromatography (HPLC), they measured the concentration of thiocyanate to model how long it remains in the bloodstream after cyanide exposure.

“This gave us the timeline for how long after exposure that thiocyanate can be tested for and its concentration range – information that’s critical to detect cyanide fishing. Despite decades of concern about cyanide fishing, this timeline has never been developed,” Rhyne said.

It was the necessary first step in developing a field-deployable test to detect fish caught by cyanide – something that environmental organizations, law enforcement, and aquarium trade importers and retailers have been advocating for years. 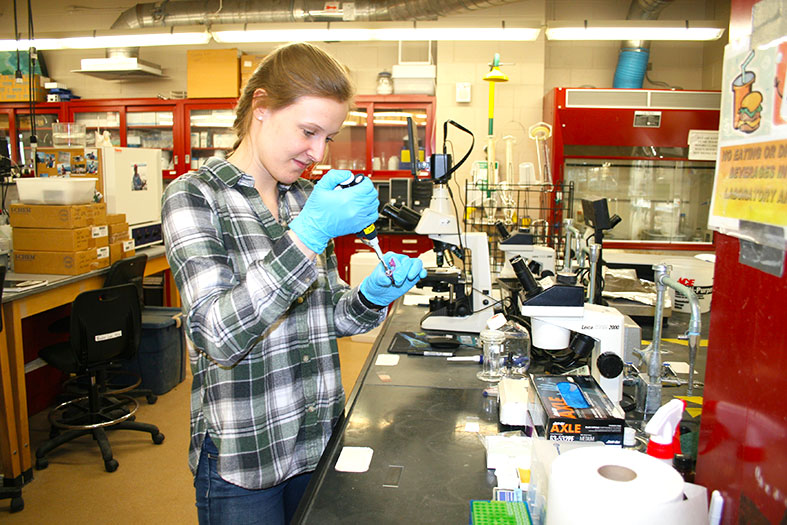 Drawing plasma from a blood sample, Sara Hunt prepares a slide to examine the specimen under a microscope.

From sample preparation to analyzing the data, an army of undergraduate student researchers were involved at every step of the project. It was a collaborative intersection of marine biology and chemistry, enabling a robust team of students to work as both biologists and chemists on cutting-edge research. Over several years, nearly a dozen students have contributed to and are continuing the research, some as early as their freshman year.

Sara Hunt, a senior biology and chemistry double major and an honors student, will incorporate this work into her thesis and Honors Program capstone project. As one of the lead authors on the report, she already has a prestigious research publication under her belt as an undergraduate, making her application stand out among her peers when she applies to physician assistant programs at medical schools this spring.

“Working on the cyanide project has taught me a great deal about the importance of careful planning, attention to detail, problem solving, and collaboration in a marine biology and chemistry setting. So far, these skills have helped me tremendously in job interviews and in off-campus clinical positions, and will continue to benefit me in clinical- or laboratory-based roles and in physician assistant school in the future,” said Hunt, who also works part-time as a medical scribe at a hospital. 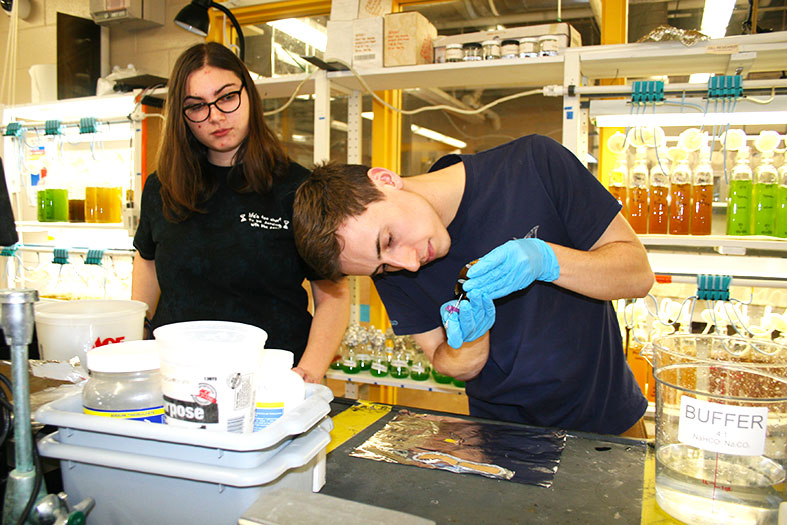 John Alex Bonanno ’17 draws a blood sample from a sedated clownfish, while undergraduate student researchers observe and learn the process.

John Alex Bonanno, an author of the report who graduated from RWU with a bachelor’s degree in marine biology in 2017, had worked with Rhyne on research in the Wet Lab during his time at RWU and decided to return to work with the RWU team for his master’s thesis. Now a graduate student at UMass-Boston, Bonanno said that his research experiences at Roger Williams have prepared him for graduate school and beyond.

“This project has exposed me to many aspects of chemical analysis, broadening my skill set. I can put that on my résumé, which will make me very marketable for any job in the biotech and pharmaceutical industries around Boston,” said Bonnano, who hopes to complete his master’s degree in marine science and technology in December.

Back in the RWU Wet Lab and Chemistry Lab, the work hasn’t stopped a day. The research team exposes, dissects, and analyzes.

As they continue to refine their method and work on other marine fish species, they are moving closer to a solution. Their ultimate goal is to develop a simple test that governments and importers can use to check whether fish have been exposed to cyanide. Once a test is available, combating and even eradicating this destructive fishing method could finally became a realistic possibility.

Read the open access article, “On the half-life of thiocyanate in the plasma of Amphiprion ocellaris: implications for cyanide detection,” available online now via PeerJ.