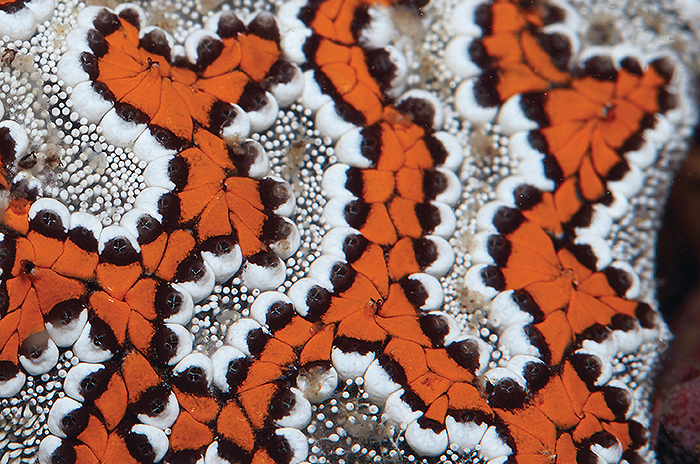 Can you identify this coral reef animal? Image by D. Knop/Koralle.

This is a colonial tunicate well known to science as Botrylloides leachii (Savigny 1816). It is sometimes called the Ladder Ascidian and is seen in a range of color forms, this being the most distinctive. (Note: Its name is commonly misspelled as “Botrylloides leachi” (sic) in Internet references.)

Tunicates are invertebrate animals usually found growing found attached to hard substrates in reef environments, although some forms (such as salps) are pelagic and drift in the water column. The sessile forms are occasionally seen on good-quality live rock, but they are filter feeders that demand expert care. They are known as tunicates for the outer body wall or “tunic” of exoskeleton-like tissue that gives the animal its shape.

Also called ascidiians or sea squirts, tunicates are classified in the phylum Chordata, subphylum urochordata and have dorsal nerve cords at an larval stage of their development. Curiously, some—including Botrylloides leachii—show a highly unusual trait called “whole body regeneration” (WBR) and are able to grow an entire new animal from tiny fragments of tissue (fewer than 200 cells). This makes them of special interest in laboratory studies of nerve tissue, stem cells, and organ regeneration.

While some tunicates are solitary, others, such as this species, live in massed colonies that grow in sheets on rock or hard bottom.

UC Berkeley: Introduction to the Urocordata