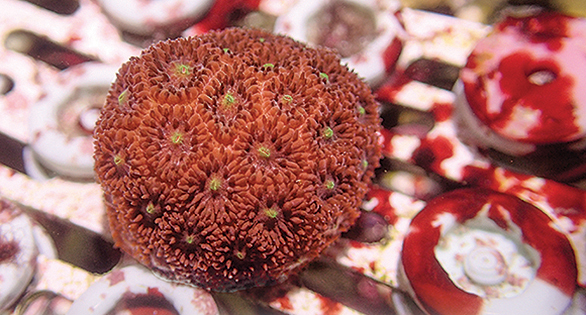 We may be conjuring a vision, but there seems to be something in the air these days in the reefkeeping world. A moment of big change may soon be upon us, in this case, something that could hardly have been imagined not so long ago. Major milestones in the past have been the discovery that live rock and natural biofiltration could increase success with marine aquariums; the advent of amazing propellor pumps to bring previously unheard-of water flow and even waves to boxes of water; the arrival of proper-spectrum lighting mimicking the quality and intensity of tropical sunlight; historic breakthroughs in reef fish breeding, including rare “Holy Grail” angelfishes; and the explosion in stony coral cloning and a shift to stocking a captive reef with frags and maricultured or aquacultured small colonies.

Next, we submit, may well be the sexual propagation of stony corals in home aquariums and on small, specialty aquafarms. To make the case, we draw your attention to the article starting on page 106 of the March/April 2019 issue, by CORAL German contributor Samuel Nietzer, shown here on a shallow reef in Guam where he has been working with a lesser-known Scleractinian coral, Leptastrea purpurea. 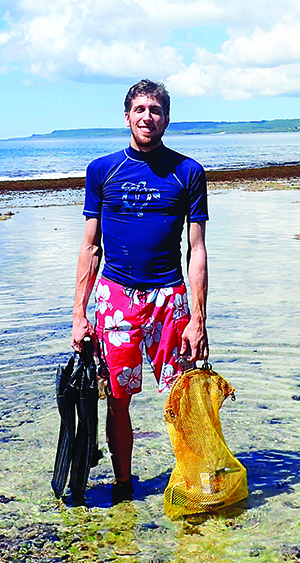 Author Samuel Nietzer on a reef in Guam.

The small red colony shown here is a three-year-old Leptastrea grown by Nietzer, who is a Ph.D. candidate at the University of Oldenburg. This and hundreds of sibling colonies in his lab started out not as frags, but rather as planula larvae brooded and released by parent colonies of this unusual coral. These small, captive-grown corals are, remarkably, already starting to spawn themselves.

Lest we trigger a Gold Rush among reefkeepers, this species might well be called the Guppy of Stony Corals. It broods its larvae, then produces several well-developed offspring each day during a prolonged breeding season, and these robust larvae have no trouble settling and developing in a captive aquarium system. (Rock encrusted with red calcareous algae may be needed to stimulate the larval settlement.)

Says Nietzeer: “Some of our young stock obtained in Guam in 2015 have been imported to Germany and have been living in our aquarium facility in Wilhelmshaven ever since. Although the corals grow very slowly, we were able to collect the first larvae from them after just three years in captivity. The record number of larvae from our 35 or so corals stands at around 30 in a day. This number is, of course, comparatively small, but it is sufficient to continue our research into settlement behavior… There is no doubt that this rather inconspicuous—but nonetheless highly fascinating—coral species has considerable potential. Reef aquarists may be tempted to keep and rear sexually-produced spawn from particularly colorful and attractive strains that appear in the aquarium trade.”

Indeed. Just browsing through the pages of this issue, we can easily find all the off-the-shelf lighting, current pumps, dosing systems, and digital controllers to mimic spawning season on a reef anywhere in the world. Look to coming issues of CORAL for more news and, we hope, guidance on what could be an exciting new threshold into sexual reproduction of stony corals in our own home reef aquariums.

Leptastrea purpurea: A Model Coral for Research and Captive Breeding