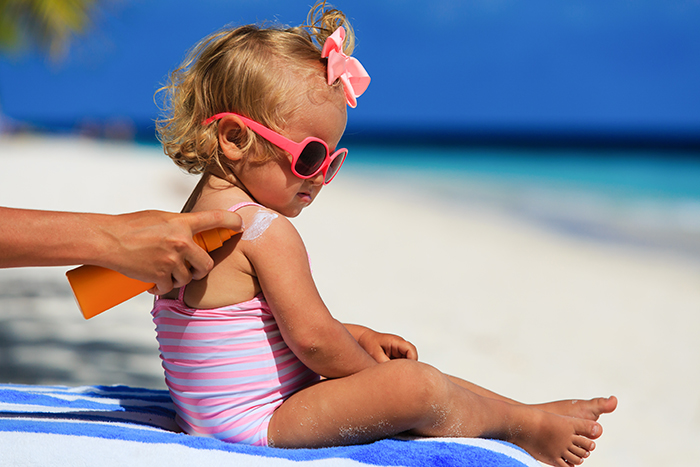 An estimated 14,000 tons of sunscreen products enter the ocean each year, most with ingredients now known to kill corals. Image: NadyaEugene/Shutterstock.

Following the example that Hawaii, Palau, and parts of Mexico made last year, the state of Florida is considering proposed legislation to outlaw two chemicals found in many sunscreens that are known to kill corals. The chemicals, oxybenzone and octinoxate, wash off our bodies when we swim, snorkel, or dive in the ocean. But even those of us who don’t swim can spread the chemicals into the ocean by lying on the sand with sunscreen on (the sand can wash into the ocean). Oxybenzone and octinoxate also get into the ocean when we rinse off in the shower after a day at the beach. The effect can be disastrous: corals bleach and are unable to reproduce when they are exposed to high levels of these chemicals and coral larvae can be killed. Every year worldwide, approximately 14,000 tons of sunscreen end up in the ocean.

Florida is home to the largest reef system in the United States and the third largest in the world; it is the only living barrier reef in the continental U.S. The Florida Reef runs from about Port St. Lucie at the northern end south to Key West, hooking west to the Dry Tortugas. It measures up to four miles wide, is 170 miles 92765 km) long and includes Biscayne National Park and the renowned John Pennecamp Coral Reef State Park off Key Largo. It is comprised of around 6,000 individual reefs, which range in age from 5,000 to 7,000 years old. It is home to 40 species of stony corals and around 500 species of fish; this diversity is comparable to diversity found on coral reefs in the Caribbean.

Like other reefs around the world, the Florida Reef has experienced dramatic deterioration in recent decades, with some areas experiencing near-total die-off of Elkhorn, Staghorn and other important reefbuilding corals. Bleaching was first recorded on the Florida Reef in 1973, and incidents have increased in recent years with the rise in sea temperatures and rise in sea level (which increases turbidity and decreases salinity on the reef). Scientists continue to look for causes of ongoing coral disease outbreaks, looking at a range of suspects, including traces of drugs, endocrine disruptors, and other chemicals from human populations along the coast. Tourism contributes its share of the troubles, but it is one of Florida’s vital flock of golden geece.

Billions of Tourism Dollars at Stake 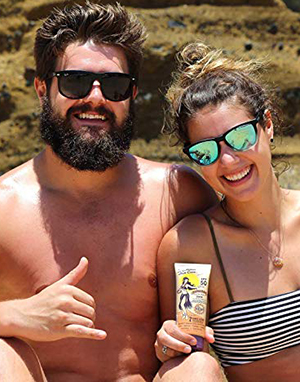 In light of all this, some lawmakers are moving to protect the reef in a tangible way. A bill to ban harmful sunscreens, introduced in the Florida senate by Sen. Linda Stewart, a Democrat from Orlando, would ban all sunscreen containing oxybenzone and/or octinoxate from the state unless the user has a prescription. The law would take effect in 2021. The first infraction would be penalized with a fine; the second with something harsher that is yet to be determined. Key West has already passed a law banning the offending sunscreens, effective in 2021. The mayor of Key West, Teri Johnson, called the decision an “obligation” that the city council has to protect the coral reef. “It’s the right thing to do,” she said.

The Florida Reef is a huge boon to the tourism industry of Florida, with reef-related activities netting the state many billions of dollars every year. The state has a vested interest in protecting the reef from further bleaching and die-off, and state lawmakers believe that banning sunscreen with reef-damaging chemicals is the easiest way to make an impact here. They hope that when sunbathers, swimmers, snorkelers, and divers make the switch to zinc-based sunscreens, the reefs will be protected into the future. Reef-safe sunscreens are relatively easy to find now, and they will become even more abundant as more reefside vacation spots ban their harmful counterparts. The economy is shifting towards safer sunscreens, and consumers should have no problem finding and using these effective and environmentally-friendly sunscreens.

With a tideswell of legislation looming, manufacturers are not waiting until 2021 to get reef-safe products on the shelves.Look for sunscreens made with zinc oxide or titanium dioxide. Many brands are already available, including Alba Botanica, Badger, Well at Walgreens, Sun Bum, White Pelican, ThinkSport, and many others. They are readily available online or at your local pharmacy or dive shop.