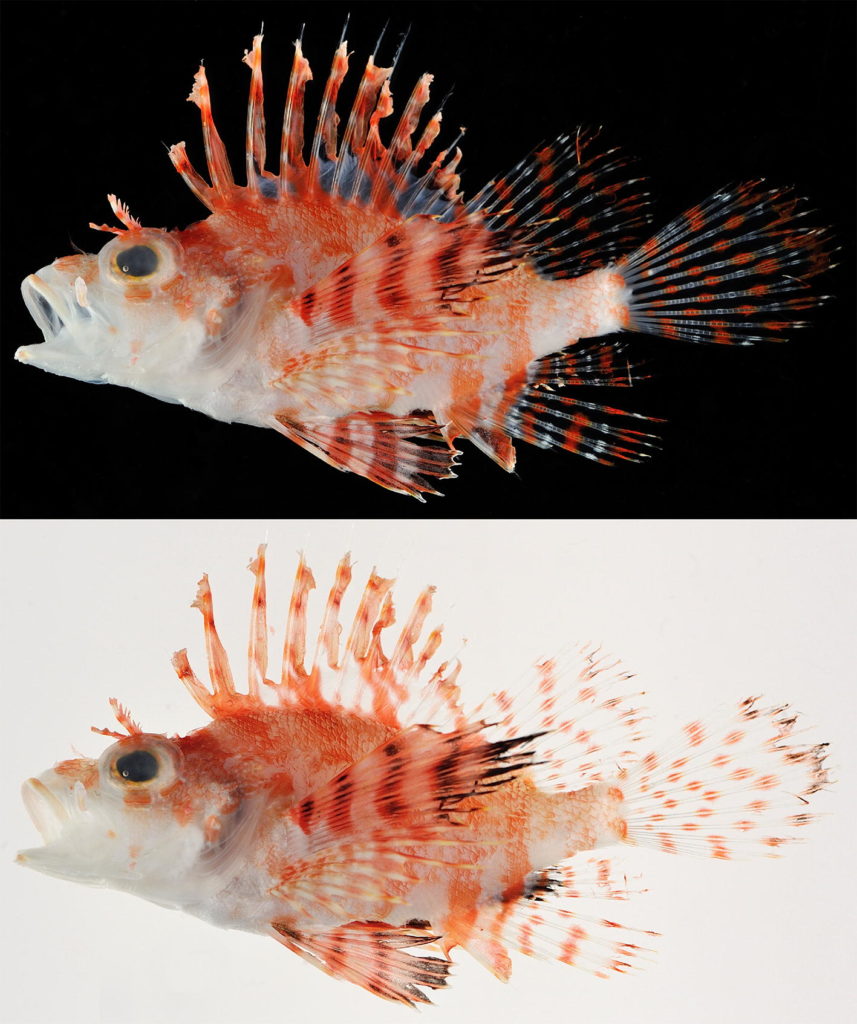 Within a much larger review of the Zebra Dwarf Lionfish, Dendrochirus zebra, authors Mizuki Matsunuma and Hiroyuki Motomura included the new scientific description of a new species of red and white Dwarf Lionfish, which was discovered in Japanese waters back in 2013.

Dendrochirus koyo sp. nov., given the English name of Ogasawara Dwarf Lionfish, was described from a single specimen collected at 143m depth off Chichi-jima Island, Ogasawara Islands, Japan. It was discovered by researchers operating the Reserve Vessel RV Kōyo-maru, which was performing a biological dredge on July 16th, 2013. Because it measured only 45.0 mm SL (1.75 inches), we have no way of knowing whether this is a juvenile or adult specimen of this new, possibly endemic, and probably deepwater lionfish.

It’s worth noting that some scientists and taxonomists are skeptical of species descriptions based on only a single known specimen, particularly when the new species does not differ significantly from a known species. As such, the Ogasawara Dwarf Lionfish’s validity as a species certainly could benefit from further exploration and scientific collection where it was discovered.

Dendrochirus koyo sp. nov. has currently been recorded only from the type locality at a depth of 143 m, off Chichi-jima Island, Ogasawara Islands, Japan. The species is known only from the holotype, despite comprehensive surveys of specimens of Dendrochirus in collections worldwide during this study. It is most likely to be endemic to the Ogasawara Islands seamount, although the distributional range may extend southeastward to the Mariana Islands.

The name of the new species refers to the RV Kōyo-maru, the research vessel of the Tokyo Metropolitan Islands Area Research and Development Center of Agriculture, Forestry and Fisheries. The holotype was collected during a Kōyo-maru cruise to the Ogasawara Island, jointly operated by the agency and NSMT. The name is used as a noun in apposition.

The English name of the species refers to the type locality, whereas the Japanese name [Shiro (white)-himeyamanokami (Japanese common name for Dendrochirus)] refers to the uniformly whitish body coloration of the preserved (and only known) specimen.

Read the full article, Redescription of Dendrochirus zebra (Scorpaenidae: Pteroinae) with a new species of Dendrochirus from the Ogasawara Islands, Japan, online at https://link.springer.com/article/10.1007/s10228-019-00681-1