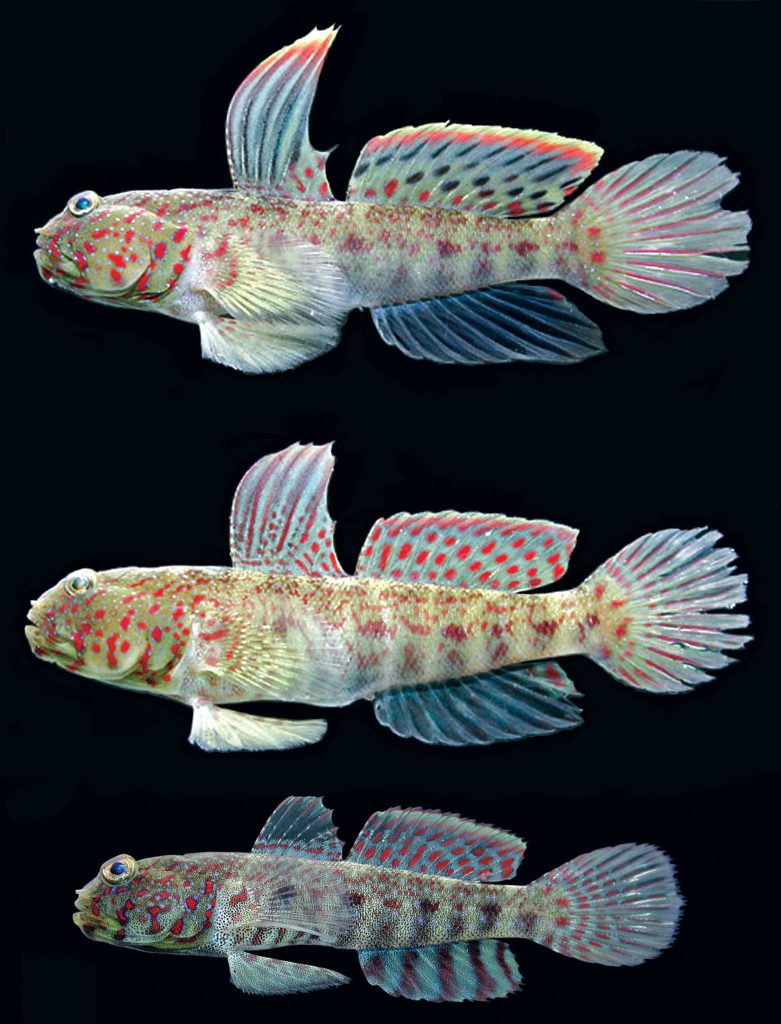 The new Highfin Shrimpgoby, Cryptocentrus altipinna, is introduced with the male holotype (top) and female and juvenile paratypes (middle and bottom), all from Libong Island, Thailand. Image credit: Koichi Shibukawa; CC BY 4.0

Awash in spangles of red and blue on an olive green base coloration, and potentially exhibiting a sail-like first dorsal fin, the newest member of the Watchman/Shrimpgoby genus Cryptocentrus might just be what the marine fish breeder ordered. This exciting new species has been formally introduced as Cryptopcentrus altipinna, the Highfin Shrimpgoby, by author Douglas F. Hoese in the Journal of the Ocean Science Foundation (JOSF). The striking coloration and sexual dimorphism would make this a welcome species for the pioneering marine fish breeder to pursue, as other species in the genus are already produced with regularity, most notably the Yellow Watchman Goby (Cryptocentrus cinctus).

C. altipinna is not well known; only a handful of specimens are in preserved collections. It appears to be restricted to the Indian Ocean, currently known from Tanzania, Sri Lanka, and the Andaman Sea off Thailand, a broad swath of ocean suggesting there may be other populations in between. Hoese notes that “specimens from Sri Lanka and Tanzania differ slightly in coloration from the Andaman Sea specimens, having more prominent blue spots on the body and more conspicuous ventral bands on the body.”

The wildly-distributed, closely-related species Cryptocentrus strigilliceps and C. caeruleomaculatus are both found in proximity to coral reef habitats, whereas the only habitat information provided for C. altipinna suggests it is found in seagrass beds with sandy-mud bottoms. No specific information is given with regards to which symbiotic alpheid snapping shrimp dwell with this new species.

Owing to its presence in Sri Lanka, which is a primary export hub for marine aquarium fishes from the Indian Ocean, it’s not unreasonable to think that this species may have been seen occasionally in the aquarium trade. If not, I submit that it’s worthy of investigation, at least to get some broodstock into the hands of accomplished breeders. The remarkable finnage of the male, and overall beautiful red and blue spotted coloration of both sexes, makes this fish warrant consideration in any aquarist’s reef tank. While the dorsal fin and coloration are key sex differentiators in this species, the Highfin Shrimpgoby might also be sexed through close examination of the genital papilla, which may differ in shape and/or coloration. No specific diagnostics are provided for this particular species, although the closely-related C. caeruleomaculatus reportedly has different urogenital coloration and patterning between the sexes. Establishing pairs of the Highfin Shrimpgoby would no doubt allow for an even wider range of interesting behaviors in the home aquarium, and could pave the way to another routinely-cultivated marine aquarium fish.

You can read the full description, including a review of the entire C. strigilliceps species complex, in the open access journal article available for download through Zenodo.