Above: Video by Tanne Hoff documenting the successful husbandry of the Red Sea’s Hooded Butterflyfish, Chaetodon larvatus, regarded as a staunch corallivore in the wild.

When we believe for decades that something is impossible, we tend to get stuck in our ways. The first time the impossible happens, especially if it goes against years of prior experience, it’s easy to dismiss it as a one-off, an outlier, the “exception to the rule.”

If it happens a few more times…well, someone just got lucky.

But at some point, the evidence becomes difficult to ignore, and it’s time to rethink our long-held beliefs.

When it comes to the notion that corallivorous butterflyfishes will fail to eat in captivity, that they will only consume living coral tissue (and thus ultimately suffer a horrible death by starvation), there is a tremendous burden of proof to overturn that conventional wisdom. No doubt, countless individual fish representing this handful of extremely challenging species have failed to live long lives in the aquarium hobby throughout the 20th century, and that dismal track record earned them rightful inclusion on expert-only, “better left in the ocean” species lists.

While I largely continue to believe that most aquarists should not try to keep these fish, my mind was changed long before I ever got my first pair of corallivorous butterflyfishes. How?

Over the years I’ve amassed a pretty large bookmark collection of online videos demonstrating the ability of corallivorous butterflyfishes to eat foods in captivity. This is largely (if not nearly exclusively) at the hands of aquarists in Asia, now going back a decade, and represents what I consider to be an overwhelming number of irrefutable examples that overturn our prior dogma. There are now dozens of videos showing these challenging species readily consuming all manner of aquarium food—in fact, everything except living coral—in home aquariums. These aren’t my one-off experiences; this is the collective experience of a handful of aquarists who ignored the cautionary tales and set out to change the narrative (or maybe just couldn’t resist the urge to try these “off-limits” fishes).

Now, when presenting on the topic of keeping corallivores (e.g., at MACNA 2018 in Las Vegas, NV), I can’t just put a bunch of web links in a PowerPoint presentation or sit and play back hours of third-party footage when giving a talk, so I usually just show a quick slide saying, “Hey, the evidence is out there.”

But I can present the evidence much more successfully here online. I’ve finally put my corallivorous butterflyfish video collection into a convenient form that you can browse at your leisure. I know this isn’t every last video out there; I certainly have made only selections from some of the more prolific aquarists. If you happen to stumble across an aquarist or video that I don’t have here, please post it in the comments and I’ll add it to the list!

To me, this is overwhelming evidence that the notion that these fishes will only eat live SPS coral is flat-out wrong.

This ends the debate over whether corallivorous butterflies can and will eat in captivity, and is ample cause to start a new discussion, asking how we can best get them to eat, and what is the best long-term diet for their successful captive care? Changing the cumulative track record of these species isn’t going to happen overnight, but I believe their aquarium futures can be rewritten. 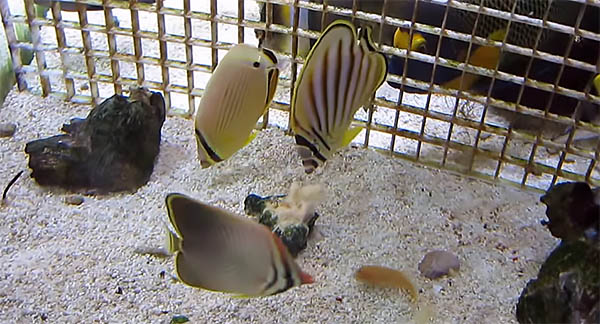 Three corallivorous butterflyfishes, all eating in captivity, effectively shattering the notion of what is “impossible”. Screen capture from Peter Leung.

Corallivores are still sensitive and challenging aquarium residents, incredibly prone to transit issues and starvation in the chain of custody, but I’m constantly reminded that keeping living SPS corals was once viewed as a similarly impossible challenge.

The Videos: Corallivorous Butterflyfishes Eating Everything Except Coral

Peter Leung used to maintain two YouTube Channels, but one appears to be closed. He has documented the feeding of Chaetodon meyeri, C. baronessa, C. lunulatus, C. ornatissimus, and C. reticulatus. While this is not an exhaustive listing, it highlights many examples of his success training this difficult species to eat over a fairly wide span of time. 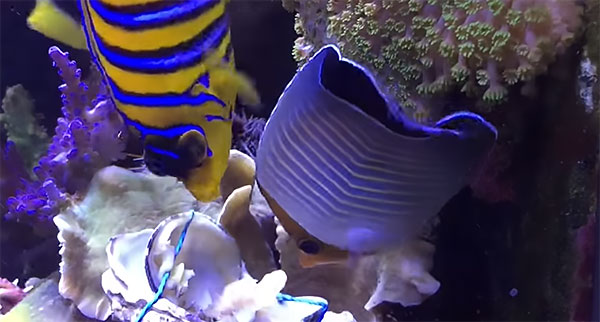 Tanne Hoff – last but not least, Dutch aquarist and reef aquarium book author Tanne Hoff has caught the attention of butterflyfish addicts with his long-term captive success housing a Hooded Butterflyfish, Chaetodon larvatus, in his beautiful reef aquarium. Here are a couple highlights:

Have a video to add? Post it in the comments!

See more coverage on the evolving husbandry of Corallivorous  Butterflyfishes at our Corallivore Challenge Homepage.