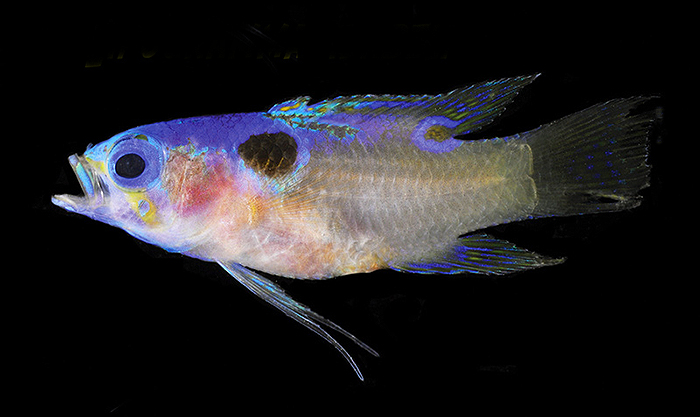 Adorned with a blue-ringed false eyespot and flashy highlights, Lipogramma idabeli was captured with a deepwater submersible. Image: Burke Museum.

Lipogramma idabeli, the Blue-backed Basslet
A new species of Lipogramma from deep reefs of Roatan, Honduras

While headlines are being grabbed by futurists looking up and fantasizing life in space, some marine biologists are looking down and finding myriad new species in depths of the oceans now becoming accessible to ichthyo-explorers. Using a small, manned submersibles capable of collecting small fishes, a team of scientists working off Roatan, Honduras, has found and identified an exceptionally beautiful basslet in what they call a “rariphotic zone,” below 130 meters (425 feet). Measuring little more than 2.5 cm (1 inch), Lipogramma idabeli, dubbed the Blue-backed Basslet,is the 13th member of its genus to be described and is named in honor of the sub used to catch it, the Idabel, carrying a pilot and two scientists.

“Manned submersibles have proven to be highly effective for collecting fishes from deep-reef habitats (Gilmore 2016), particularly in the rariphotic zone (below ~130 m; Baldwin et al. 2018), where divers using closed-circuit rebreathers, which are limited to depths less than ~ 150 m, are incapable of sampling for extended periods of time. 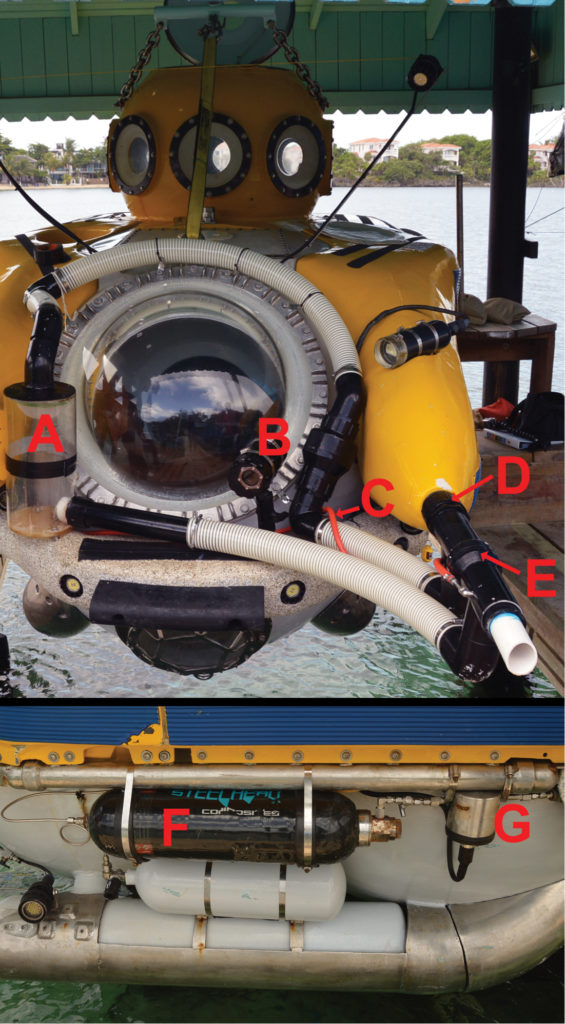 Idabel submersible outfitted with fish-catching system. A acrylic holding tank B housing for HD video camera C quinaldine sulphate delivery hose D suction for the system is powered by a PVC hose connecting to one of the submersible’s vertical thrusters E two-way valve to allow for differential suction/blowing of water and or anesthetic F carbon-fiber compensator holding up to 2.5 gallons of anesthetic solution, powered by pressurized air from a SCUBA cylinder (not shown, lower tank in image is oxygen for life support systems) G housing for solenoid valve, enabling scientists to control the flow of anesthetic from a switch inside the submersible.

“This is especially true for cryptobenthic fishes such as grammatids and gobiids, many of which are associated with structurally complex reef and rocky habitats and are unlikely to be sampled using trawls or dredges. Partially because they are difficult to sample, cryptobenthic reef fishes as a whole are an understudied group, and recent studies suggest that they comprise nearly half of all fish diversity on coral reefs and possess a large number of undescribed species (Brandl et al. 2018).

“In recent years, researchers from the Smithsonian Deep Reef Observation Project (DROP) have used the manned submersible Curasub, located on the island of Curaçao in the southern Caribbean and capable of descending to 300 m, to collect and describe a cache of new species of reef fishes, including many species of cryptobenthic fishes (e.g. gobiids, Baldwin and Robertson 2015, Tornabene et al. 2016a, 2016b, Tornabene and Baldwin 2017; labrisomids, Baldwin and Robertson 2013; and grammatids, Baldwin et al. 2016, 2018).

“In 2017, DROP operations expanded to Roatan, Honduras, where the Idabel manned submersible is located. On the first dive capturing specimens with Idabel off Halfmoon Bay, West End, Roatan, the authors collected a specimen of an undescribed species of Lipogramma (Grammatidae) at 165 m depth. Subsequent dives around this depth revealed that the species is relatively common, despite never having been collected before nor observed in more than 150 submersible dives throughout the Caribbean by us or others using Curasub, Idabel, or the Johnson Sea-Link subs. Four additional specimens, including one juvenile, were subsequently collected on later dives off Roatan.

“The description of the new species from Roatan brings the total number of species in Lipogramma to 13, all of which occur in the tropical western Atlantic Ocean. Lipogramma and Gramma are currently classified in the family Grammatidae based on a single synapomorphy in the arrangement of cheek musculature (Gill and Mooi 1993). This relationship is not supported by molecular data, although the relationships between genera in the diverse Ovalentaria have proven to be difficult to resolve with traditional molecular markers, a combination of molecular markers and morphological characters, and phylogenomic data (Betancur-R et al. 2013; Mirande 2016; Eytan et al. 2015).

“Nearly all species of Lipogramma occur on deep reefs. Lipogramma trilineata and L. anabantoides are the only two species known to routinely occur above 50 m, which is approximately the limit of recreational scuba diving. Including the new species described here, five species of Lipogramma have been described from specimens collected using Curasub and Idabel. Several species are rare in collections, owing to the difficulties of collecting fishes from structurally complex deep-reef habitats. Currently L. haberorum, L. barrettorum, L. schrieri, L. robinsi, L. flavescens, L. regia, L. rosea, and the new species described here are each known from fewer than 10 specimens, although this may not accurately reflect an actual rarity in the wild. Increased sampling from Roatan and other localities across the Caribbean are certain to uncover additional undescribed species of Lipogramma and other cryptobenthic fishes.

“Specimens were collected using the Idabel submersible. The Idabel can accommodate a pilot and two scientists and is capable of diving to ~700 m. This sub was recently outfitted with a fish-catching system capable of delivering an anesthetic solution (5% quinaldine sulphate in seawater) and capturing specimens with a suction system powered by one of the submersible’s vertical thrusters (Fig. 1). Four of the five type specimens were brought to the surface alive where they were photographed prior to euthanasia in MS222 and preservation. Tissue samples were taken and stored in 95% ethanol, and voucher specimens were fixed in 10% formalin and later transferred to 70–75% ethanol. Measurements were made weeks to months after preservation, and were taken to the nearest 0.1 mm with digital calipers. Counts and measurements follow Hubbs and Lagler (1947). 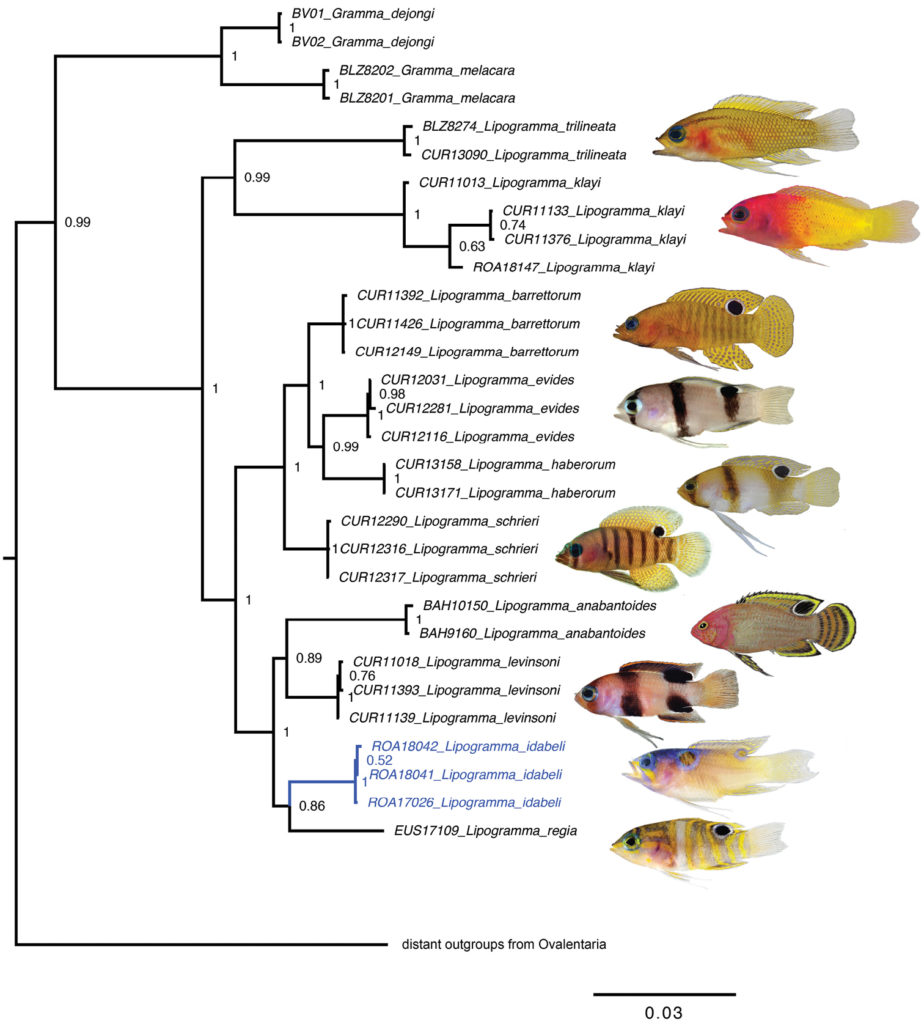 “Specimens were x-rayed with a digital radiography system. Type specimens were deposited at the University of Washington (UW), the National Museum of Natural History, Smithsonian Institution (USNM), the Florida Natural History Museum (UF) and the National History Museum of the National Autonomous University of Honduras in the Sula Valley (MUVS-V). Cephalic pores were viewed and photographed using a Zeiss Discovery V20 SteREO microscope with an attached Axiocam 503 digital camera. In addition to comparing our morphological data to those from original species descriptions, our comparative material examined here included several specimens (including types) of L. evides, L. levinsoni, L. barrettorum, L. schrieri, L. haberorum, as well as the voucher specimens from our phylogenetic analysis. Catalog numbers of these specimens are listed in the appendices of Baldwin et al. (2016) and Baldwin et al. (2018).

“A new species of Lipogramma is described from submersible collections at 122–165 m depth off the coast of Roatan, Honduras, in the western Caribbean. The new species is distinguished from all other species in the genus by its bright blue coloration on the head, nape, and dorsal portion of the trunk beneath the spinous dorsal fin, a prominent round black blotch below the origin of the spinous dorsal fin, and a high number of gill rakers. A molecular phylogeny based on mitochondrial and nuclear genes shows that the new species belongs to a clade containing L. levinsoni, L. regia, and L. anabantoides. At Roatan, submersible observations of this and other Lipogramma species indicate clear, interspecific habitat partitioning by depth and substrate.