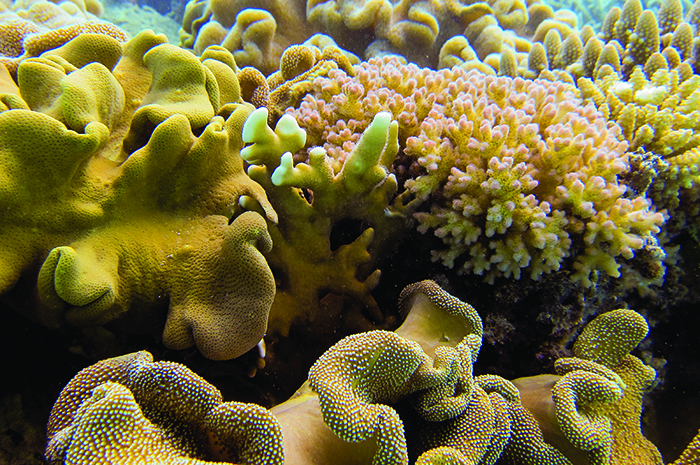 The secret life of corals, already full of mystery, is getting even more complicated as global researchers are discovering a vast web of aquatic bacteria that live in symbiotic relationships with reef-building stony corals.

“Just like the bacteria within our gut help us digest food and protect us from pathogens, the normal bacteria associated with corals can also help them process nutrients and help protect them against disease,” says Dr. Jesse Zaneveld at the University of Washington. Researchers say that some of the relationships between corals and their microbiomes can be traced back millions of years. 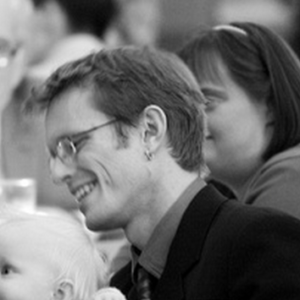 When it comes to the well-being of coral reefs, for many years scientists focused on bleaching, an event that can endanger corals and the diverse marine ecosystems that they support. In bleaching, high temperatures or other stressors cause corals to expel Symbiodinium, the beneficial, brightly colored dinoflagellates that would normally share excess energy and nutrients with corals. Bleaching ultimately starves corals and endangers the entire reef ecosystem.

But over the last two decades, scientists have realized that other microscopic symbionts are also critical for coral health, including communities of bacteria that live on coral surfaces and in their tissues. These bacteria constitute the coral microbiome. High temperatures — even below the threshold for bleaching — can disrupt coral microbiomes, leaving corals vulnerable to disease.

But scientists lack comprehensive data about the bacteria that make up the microbiomes of the more than 1,500 coral species worldwide. That is starting to change thanks to the Global Coral Microbiome Project, a collaboration among researchers at the University of Washington Bothell, Pennsylvania State University and Oregon State University. The team is studying the diversity of bacteria within corals and how it has changed over time.

In their first comprehensive survey of healthy corals, published Nov. 22 in the journal Nature Communications, the team reports that coral bacteria are a surprisingly diverse bunch — and that different sections of the coral body can host unique communities of bacteria.

“This project represents one of the most comprehensive efforts to identify what kinds of bacteria are present in diverse groups of tropical corals, how the types of bacteria can differ over coral anatomy, and how the symbiotic relationships between corals and bacteria have changed over coral evolution,” said senior and corresponding author Jesse Zaneveld, an assistant professor of biological sciences at UW Bothell.

Their findings reveal what a relatively healthy coral microbiome looks like in a variety of coral species, and how coral microbiomes have formed and evolved. Understanding the microbiome may even help predict which corals will survive heat waves or disease outbreaks.

The team partnered with scientists at James Cook University and the Australian Institute of Marine Science to collect 691 small tissue samples from 236 different healthy corals along the Great Barrier Reef. The researchers took samples from up to three different tissues in each coral: the hard skeleton of calcium carbonite, the soft inner tissue and the outer mucus layer. The corals sampled included diverse species that have, in some cases, been evolving separately for tens of millions of years. 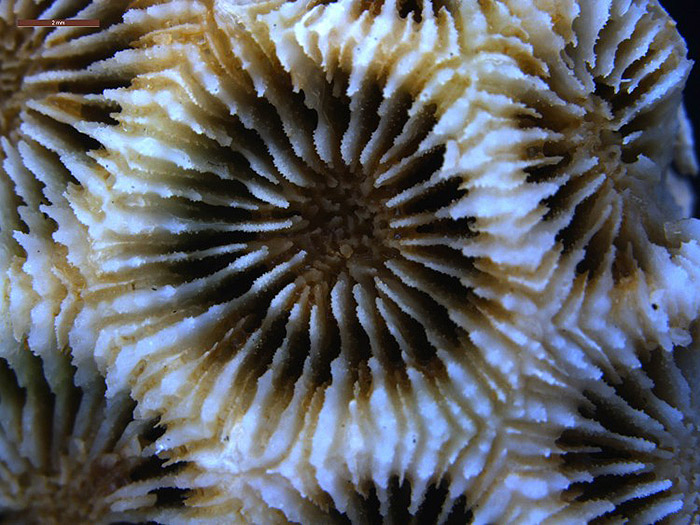 Skeleton from a stony coral in the genus Favites. Image: Ryan McMinds

The researchers sequenced sections of DNA from bacteria in those tissue samples, which they used to identify the types of bacteria in healthy microbiomes for each coral species and tissue. They discovered that the mucus, skeleton and soft tissue all contain distinct microbial communities — and that the richness and diversity of bacterial species present differed greatly by tissue type. In general, the skeleton contained the greatest diversity of bacteria, a finding which surprised the team. They had been expecting the mucus, which coats the coral and forms a barrier between itself and the environment, to harbor the most diverse microbiome. Instead, the mucus microbiome was often the least diverse.

The team also discovered that coral species differed the most in the composition of their tissue microbiomes. While mucus microbiomes also differed by coral species, they were also strongly influenced by environmental factors such as location, temperature and depth. The major differences between coral species raised questions about the age of these associations between corals and their microbes, and how they have changed over time.

The researchers found that distantly related corals were more likely to have highly differing microbiomes. Corals that were more closely related typically had similar microbiomes. This pattern, known as phylosymbiosis, was strongest for the microbiomes from inside the corals’ stony skeletons. Though the team discovered that many coral-bacteria associations are likely recent, at least four types of bacteria evolved together with certain groups of corals over millions of years.

Now the researchers hope to gather additional data on healthy coral microbiomes to learn why some species have strikingly different types of microbiomes and to investigate how tissues in the same coral establish and maintain different microbiomes.

“We want to understand what roles that different factors — such as the coral’s immune system or its environment — play in shaping the microbiome,” said Zaneveld. “These answers could help us understand how the microbiome affects coral health, and what goes wrong when the corals are stressed.”

Stony corals have been around for more than 400 million years, and today’s coral reefs shelter fish that feed millions and harbor potentially life-saving pharmaceuticals. Stressors linked to climate change are already linked to record levels of bleaching. But simply studying coral microbiomes will not save reefs, Zaneveld said.

“The Great Barrier Reef is huge — roughly twice the size of the state of Washington — so there is probably no drug or beneficial microbe we can add to the water to save it,” said Zaneveld. “But, we can save coral reefs by fighting back against climate change.”

Only tackling the root causes of coral reef decline — through measures to slow climate change and reduce both overfishing and nutrient pollution — will ultimately help corals, he said.

“And if we do, we can also save intricate bacterial symbioses that evolved over millions of years, and that may hold the key to new medical drugs that we would otherwise lose from the world forever,” said Zaneveld.

Sources
Adapted from materials released by the University of Washington.
Article by James Urton/UW News.