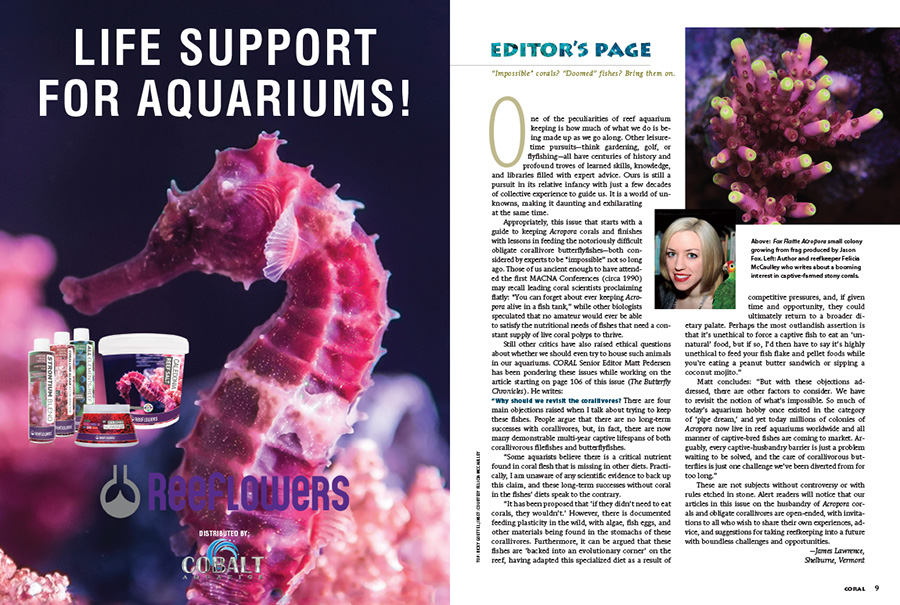 Read the Editor’s Page, by James Lawrence, from the November/December 2018 issue of CORAL Magazine.

One of the peculiarities of reef aquarium keeping is how much of what we do is being made up as we go along. Other leisure-time pursuits— think gardening, golf, or flyfishing— all have centuries of history and profound troves of learned skills, knowledge, and libraries filled with expert advice. Ours is still a pursuit in its relative infancy with just a few decades of collective experience to guide us. It is a world of unknowns, making it daunting and exhilarating at the same time. 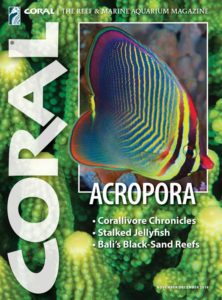 This article appears in the November/December 2018 issue of CORAL: Click to order this back issue for your collection.

Appropriately, this issue that starts with a guide to keeping Acropora corals and finishes with lessons in feeding the notoriously difficult obligate corallivore butterflyfishes—both considered by experts to be “impossible” not so long ago. Those of us ancient enough to have attended the first MACNA Conferences (circa 1990) may recall leading coral scientists proclaiming flatly: “You can forget about ever keeping Acropora alive in a fish tank,” while other biologists speculated that no amateur would ever be able to satisfy the nutritional needs of fishes that need a constant supply of live coral polyps to thrive.

Still other critics have also raised ethical questions about whether we should even try to house such animals in our aquariums. CORAL Senior Editor Matt Pedersen has been pondering these issues while working on the article starting on page 106 of this issue (The Butterfly Chronicles). He writes:

“Why should we revisit the corallivores? There are four main objections raised when I talk about trying to keep these fishes. People argue that there are no long-term successes with corallivores, but, in fact, there are now many demonstrable multi-year captive lifespans of both corallivorous filefishes and butterflyfishes.

“Some aquarists believe there is a critical nutrient found in coral flesh that is missing in other diets. Practically, I am unaware of any scientific evidence to back up this claim, and these long-term successes without coral in the fishes’ diets speak to the contrary.

“It has been proposed that ‘if they didn’t need to eat corals, they wouldn’t.’ However, there is documented feeding plasticity in the wild, with algae, fish eggs, and other materials being found in the stomachs of these corallivores. Furthermore, it can be argued that these fishes are ‘backed into an evolutionary corner’ on the reef, having adapted this specialized diet as a result of competitive pressures, and, if given time and opportunity, they could ultimately return to a broader dietary palate.

“Perhaps the most outlandish assertion is that it’s unethical to force a captive fish to eat an ‘unnatural’ food, but if so, I’d then have to say it’s highly unethical to feed your fish flake and pellet foods while you’re eating a peanut butter sandwich or sipping a coconut mojito.”

Matt concludes: “But with these objections addressed, there are other factors to consider. We have to revisit the notion of what’s impossible. So much of today’s aquarium hobby once existed in the category of ‘pipe dream,’ and yet today millions of colonies of Acropora now live in reef aquariums worldwide and all manner of captive-bred fishes are coming to market. Arguably, every captive-husbandry barrier is just a problem waiting to be solved, and the care of corallivorous butterflies is just one challenge we’ve been diverted from for too long.”

These are not subjects without controversy or with rules etched in stone. Alert readers will notice that our articles in this issue on the husbandry of Acropora corals and obligate corallivores are open-ended, with invitations to all who wish to share their own experiences, advice, and suggestions for taking reefkeeping into a future with boundless challenges and opportunities.