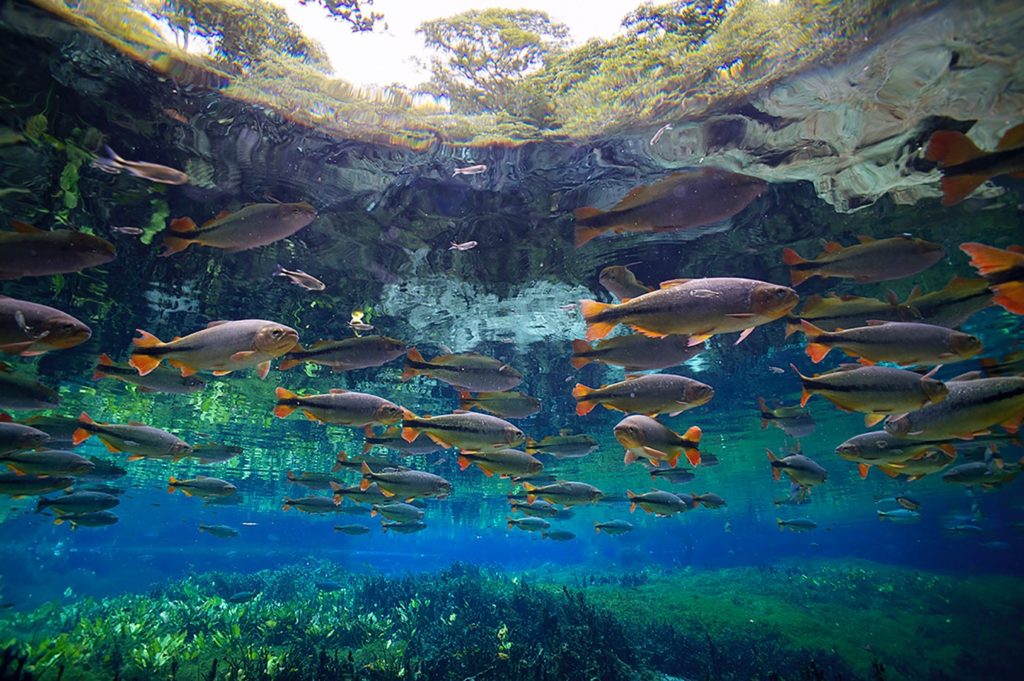 Shoal: in the sense above, a loose grouping of fish. Or, as organizers hope, a cohesive multi-organizational approach to protecting freshwaters around the globe. Shown here: Piraputanga (Brycon hilarii), Mato Grosso do Sul, Brazil © Michel Roggo

‘Shoal’ is an initiative to unite those with an interest in freshwater fish in supporting their conservation. It aims to be an innovative partnership engaging individuals, associations, NGOs, and corporations to work together for the good of freshwater species.

Shoal is still in its infancy but was conceived following the realization that whilst freshwater fish are both highly threatened and their conservation is critically underfunded, there exists a huge potential constituency of support for their conservation. Far more so than for most components of biodiversity, there are entire hobbies, professions, and industries dedicated to freshwater fish.

Why is Shoal needed?

Whilst liquid freshwater covers just 0.8 percent of Earth’s surface, it directly supports almost one-third of vertebrate species (Mittermeier et al., 2010). Like the rainforests of the Amazon, it is a hotspot for life on Earth. For example, in Central and South America, 5,600 vertebrate species can be found in just 0.002 percent of Earth’s liquid water (Albert et al., 2011). But unlike the charismatic species which inhabit many other threatened environments, freshwater species are often paid little attention, even within the field of nature conservation itself!

In North America alone 53 species of freshwater fish have gone extinct since the start of the 20th century – a rate of extinction which is at least 877 times the natural background rate of extinction for freshwater fish (Burkhead 2010). Many of the same developments which drove these North American extinctions are now playing out in tropical basins where freshwater fish diversity and endemism are much higher (e.g. see Winemiller et al., 2016). For example, nearly 70% of all kilometers projected to be affected by river fragmentation or regulation occur in freshwater ecoregions with the greatest diversity of fish species, such as the Amazon, Mekong, and Magdalena (Opperman et al., 2015).

Already one in three freshwater fish (32%) have been assessed to be threatened with extinction, competing with amphibians for the unwanted title of the most at risk vertebrate group on the IUCN Red List, which acts as a barometer for the health of life on Earth (IUCN 2018). This is indicative of the rate of change in these ecosystems. The Living Planet Index indicates an 81% decline in freshwater species abundance between 1970 and 2012 (WWF 2016).

Reasons to be Optimistic

The lines are going down, and the multiplicity of threats to freshwater ecosystems can make the situation look grave. However, there are reasons to be optimistic that conservation efforts can have a significant impact on freshwater species, and fish in particular.

Firstly, there are entire hobbies and industries dedicated to these remarkable species – angling, aquaria, fisheries, the ornamental trade – and it is no wonder. They are kaleidoscopic in colour; exhibit amazing adaptations; inhabit some of the most spectacular environments on Earth; are often of huge cultural and ecological significance; and finally, are of critical importance to global food security – particularly for many of the world’s poorest communities. For example, 2,500 species of ornamental fish (60% of which are of freshwater origin) are traded in 125 countries at a retail value of more than $10 billion (Dey 2016). Since 1990, more than 100 new public aquariums have opened around the world attracting as many as 450 million visitors per year (Penning et al., 2009). Meanwhile in the US alone there are 50 million recreational anglers, and fishing is the second most popular outdoor recreational activity, behind only running and jogging (Statista 2017). Around the world, inland fisheries provide livelihoods to 60 million people, and food security for hundreds of millions more (Cooke et al., 2016). There is then an enormous number of people with a strong interest in freshwater fish who can come together to create a formidable community for their conservation.

There are also some physiological and ecological traits which mean that, done well, freshwater fish conservation can be very effective. One of the reasons behind high extinction rates for freshwater fish is that they often occupy very small ranges, they are adapted to small and specific niches where unique combinations of temperature, flow, pH, oxygen saturation allow them to thrive. However, whilst this makes some species susceptible to extinction, it also means that where these sites can be effectively protected it can have a significant impact on the survival of a number of species (Dudgeon 2012). Secondly, most species of freshwater fish have very high reproductive rates. This means where the drivers of population declines are addressed, freshwater species populations can recover very quickly.

Finally, another reason to be optimistic is that we know from experience that freshwater fish conservation projects can be highly effective. For example, Project Piaba has demonstrated the potential for a sustainable aquarium trade to contribute to the conservation of the cardinal tetra and the natural environment in the Rio Negro. There is potential to expand this model of conservation into other watersheds.

In the US the return of species such as the Shad to the Apalachicola River and the Alligator Gar to Illinois have demonstrated the potential for small species-focused interventions to have significant impacts on freshwater fish populations (Miller 2013). Meanwhile in Southeast Asia work by local, grassroots organizations to establish fish conservation zones is helping to conserve critical microhabitats (Baird and Flaherty 2005) and there is strong evidence that where well managed for freshwater species, protected areas can have a significant beneficial impact on their survival (see Cucherousset et al., 2007, Suski and Cooke 2007).

What does Shoal hope to do?

Shoal aims to be a new type of partnership, one which has never been tried in this way before for conservation. The partnership is designed to be inclusive and expansive, reaching beyond the traditional conservation community in order to tackle the freshwater fish crisis head-on. This partnership will include zoos and aquaria, the ornamental fish trade, aquarists, anglers, conservation NGOs, conservation practitioners and scientists, and any other interested sectors and individuals.

At its core, Shoal will identify and support exemplary freshwater fish conservation projects. Shoal will seek to dramatically increase the resources available for fish conservation and link its members to in- and ex-situ projects to create a network of fish conservation expertise which can inform and amplify action. Shoal’s focus will be on species- and site-specific conservation interventions, recognizing that many large NGOs already work on water governance, policy, and management, but that there is a dearth of interventions at the grassroots to prevent species extinctions. This is something which has been confirmed in major analyses of environmental funding.

A major part of Shoal’s activities will also be sharing knowledge and experience between members, linking members with different expertise so they work more effectively together. In particular capacity development will be vital to Shoal’s activities, particularly given that in many parts of the world there are few, if any, organisations which are carrying out freshwater fish conservation.

Finally, Shoal also aims to raise awareness of the crisis facing freshwater species ecosystems. Through the network of those involved we can spread this message and capture not only public and political attention, but also encourage those already working in the conservation sector to focus on these species.

To form a shoal of organizations and individuals working together to conserve freshwater fish will require strong engagement from all sectors.

In January 2018 an initial workshop in London, United Kingdom, brought together a small number of conservation NGOs, scientists, zoos and aquaria, and industry representatives to discuss the concept of a new partnership for fish conservation. Some key conclusions arising from this workshop were the following:

Based on the outcomes of this workshop, we began fundraising for a staff member and associated costs to run a ‘scoping phase’. This staff member has now been recruited and will begin work in October. In the meantime, 11 organizations and individuals have agreed to become members of this scoping group. The role of the scoping group will be to ensure that the voices of key sectors shape the exact shape of the organization which Shoal becomes. Partners include: WWF, IUCN SSC, Chester Zoo, the Fishmongers Company, Tropical Fish Keeping UK, and The Ornamental and Aquatic Trade Association.

If you wish to find out more about Shoal or get involved contact: programmes@synchronicityearth.org