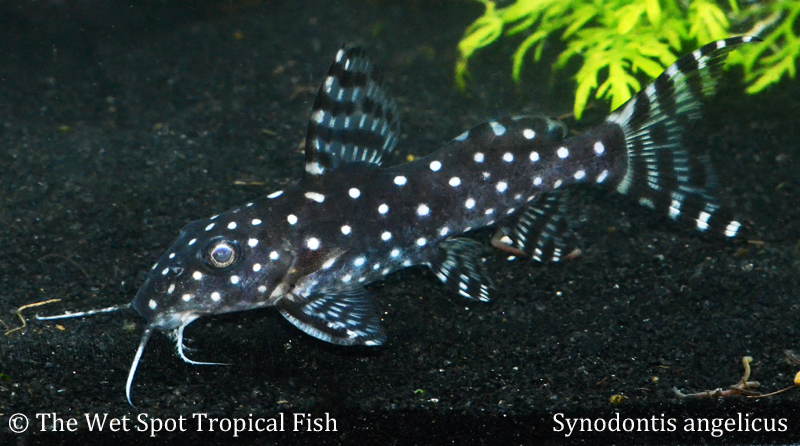 via The Wet Spot Tropical Fish

Every good tank has at least one bottom dweller, a cleanup crew to scavenge algae, leftover food, or other detritus left behind by sloppy tank-mates. Now, before you go selecting one of our esteemed sucker-mouthed plecos, which would certainly do the job beautifully, consider instead a member of this up-and-coming genus of African mochokid catfishes: Synodontis. Known as “squeaker cats” for the defensive stridulatory sounds when disturbed, this group of catfishes is becoming popular in the aquarium trade not only for the niche they fill but also for their beauty and unique personalities.

As nocturnal opportunistic generalist foragers, Synodontis catfishes can be thought of as the night janitors of the tank. Remaining in their preferred shelters throughout the day, they emerge only under the cover of darkness to scavenge for anything and everything edible along the bottom of the tank. Tanks should be set up to simulate well-oxygenated and flowing African Rivers through the use of powerheads, sandy substrate, and plentiful furnishings that provide hiding places, like piles of driftwood branches, rocks, caves, clay pots, or anything that strikes your fancy. In most cases, if keeping more than 1 individual, tanks should be 50 gallons or larger with many distinct regions full of such hideaways. Each individual will likely stake claim to one burrow and protect it from others. Though species of the genus may be territorial toward conspecifics, they are often quite peaceful and can be kept alongside other peaceful species. Appropriate tank-mates may include African dwarf cichlids, larger characins or barbs, and small mormyrids. If pairing with active top feeders, be sure to throw some extra sinking delicacies in at night. As hardy and non-specialized feeders, Synodontis catfishes will eat algal growth (which should not be discouraged), live and frozen fare, sinking pellets, and fresh vegetal matter like blanched spinach and zucchini. Sensitive to water quality, frequent, bi-weekly 50% water changes are recommended, and waters should be maintained with temperatures between 72 and 80°F, a pH of 6 to 7.5, and hardness within the range of 90 to 350 ppm.

Pictured above, and truly angelic as their scientific name suggests, Synodontis angelicus is described throughout river habitats of the Congo Basin. More commonly known as the “Polka Dot Synodontis,” this species ranges in color between individuals and within a single individual based on a given situation. These squeaker cats may be black, violet, or dark grey, dotted with numerous white or yellow spots, and show striped fins. Reaching a maximum of 7 inches in length, these cats are slow to grow but do best when given space to roam. With care they may be kept in groups of up to five.

Found among the most turbulent waters of rapids and waterfall pools, Synodontis brichardi thrives in its extremely fast environment. Tanks should be equipped with strong powerheads and the water should be very well oxygenated. Setup should include a sandy and smooth, fine gravel substrate, plentiful water-worn rocks of varying sizes and driftwood to form dark refuges. Known more commonly as “Brichard’s Synodontis,” they are a bronze-brown hue with golden striping. 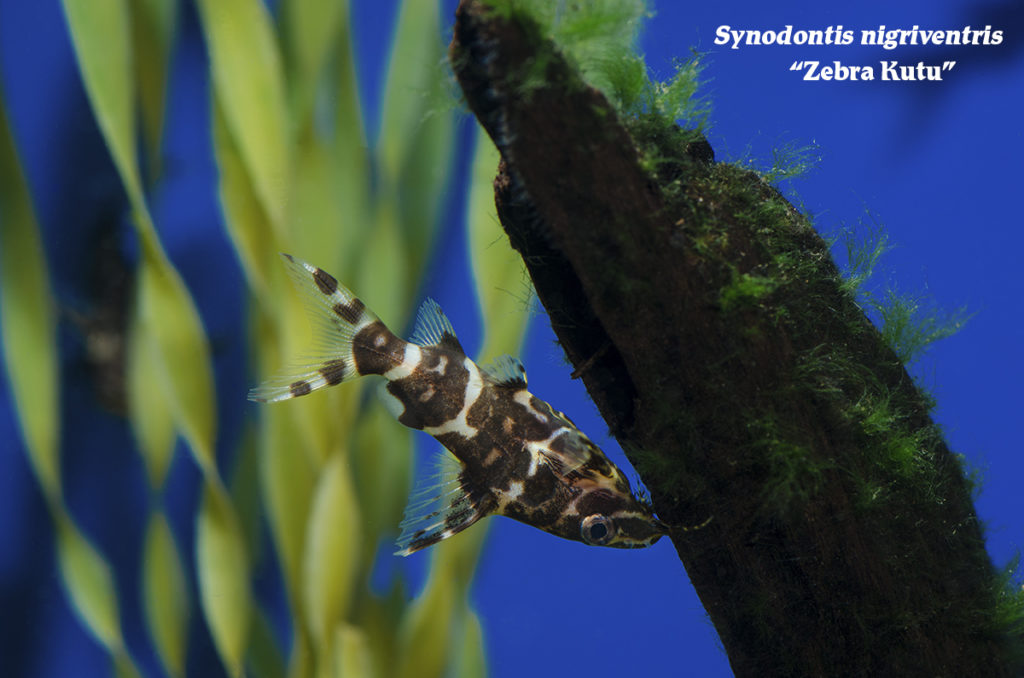 An oddball of the clan, Synodontis nigriventris is arguably the most fun catfish in the aquarium trade. Known as the “Zebra Upside Down Catfish”, they do indeed spend their active time swimming upside down. This unique behavior developed as a strategy to avoid predation by birds, since their exposed, dark underbellies are hard to spot from above. Reaching just 4 inches in length, these upside-down cats are dark in coloration with zebra-like tan striping and have very long whiskers. Extremely peaceful by nature, these Synodontis are somewhat gregarious and should be kept in groups of four or more.

Fish-loving cat (and dog!) people agree, Synodontis are the cat’s-meow. This genus holds a range of species with many colors, sizes, habits, and prices – a great option for every aquarist.